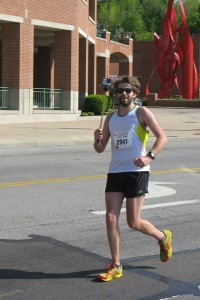 Family Status: Not married. My girlfriend is not a runner. She is a trooper for putting up with my running.  It’s a tough balance.

Does running a ton of miles in a foreign country count?  In early June I will be traveling to Portugal with Harvey Lewis and Carlos Sa. It’s through Run Quest Travel. We’ll be running in some pretty amazing places like the World Heritage site of Sintra, the mountains of Geres National Park, through old towns like Porto and Lisbon and even a little on the El Camino De Santiago.

My next race is the Cloudspliter 100. It’s a new 100 mile race in eastern Kentucky. The course is an out and back with over 25,000 feet of total elevation gain.  I think it may end up being one of the more difficult 100’s in the east (newbie perspective).

2. What do you do for a living? How many hours a week?

I currently work as a software developer with Jonas Software USA. I usually sneak in 40-50 hrs a week.  I’m also in two bands. One is folk-bluegrass and the other is more of a jazz-bluegrass jam band. Gig money helps cover the cost of shoes, shot blocks and races!

3. What do you wish you knew when you started running?

How to listen to my body. This is something I really struggled with at first. I found it difficult to decipher between training fatigue and the onset of injury.  Could I push harder or should I back off and rest? Harvey referred me to Andy Shetterly with Peak Performance Sports Therapy.  Best advice ever! Andy really helped me learn to listen to my body.  He has an incredible understanding of the bodies ability to handle and heal from exercise. On several occasions his work has made the difference between starting and not starting a race. Active release therapy should be in every runner’s bag of tricks!

4. If had a “faster” pill or a “more endurance” pill, which would you choose?

Endurance! No speed! Ahhh. This is a tough question because they are so closely related. Without speed one would not be able to run fast. Without endurance one could not run long and fast.  Speed.

5. What’s an aid station must have?

I don’t know if I can provide just one. Here are five: