Where do you live? Chicago IL 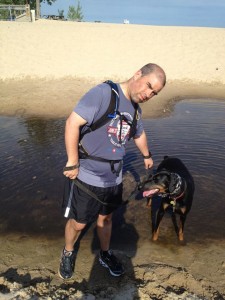 1. How long have you been running? Ultras?

I started running in 2001 at the age of 30 due to a bet by a co-worker that I couldn’t run a half-marathon.  I started running Ultras in 2012 after reading Mishka Shubaly’s “the Long Run” and hearing about the crazy world of Ultra-running.

2. What does a normal training week look like for you?

An average training week is about 60-70 miles.  Roads with my dog Dovi during the week along the Chicago lakefront path and a couple of long weekend runs on the trails of Palos with my friends from the Flalander Ultrarunner s of Chicago club.

3. Any advice for ultra spouses?

I have one of the greatest ultra spouses because although she is a non-runner she takes the time to get involved and she “gets it.”  I think many ultra-spouses become resentful about the intimacy we share with each other (sometimes with our running friends the opposite sex) and it drives runners and their spouses apart or creates jealousy.  Get involved – at least enough to know all those crazy ultra people your spouse runs with and have an idea of what they are going through.

5. What was your best race and why?

My best race was the Superior Trail 100.  I barely beat the cutoff with a “blistering” 37:48.  It was the toughest and most technical trail imaginable in 90 degree heat, and I can’t wait to suffer through it again.  Northern Minnesota is breathtaking.  People should put that race on their bucket list

I’m a recovering alcoholic so I don’t drink.  But I have to give props to New Glarus, the beer of my home state of Wisconsin.  They don’t sell it outside of Wisconsin, and people actually travel there to get it.