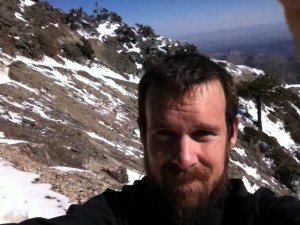 Name: Adam Gillanders
Age: 31 years old.
Hometown:  Brea, CA (just moved back home from Berkeley, CA where I graduated from UC Berkeley in Philosophy).
Family: Married to the wonderful Andrea Gillanders, who does not understand, but still fully supports my running problem.

1.  How long have you been running ultras?

I’ve been running ultras for about a month. I’ve run ultra distances on my own in the mountains before but never an actual race until recently. Trail running has always been a part of my mountaineering and hiking background here in the San Gabriel Mountains in southern California, but the ultra distances and an almost pure dedication to trail running is a fairly recent thing. I’d say the last 6 or 7 years I’ve been running very consistently and have felt a need to push the distances further and further.

I just ran my first ultra (and subsequently my first race ever), the Grizzly Peak Trail Race 50k in Berkeley, CA on April 5th 2014. I am now completely hooked and plan on pushing that distance to 50 miles immediately (I felt pretty much fine throughout my race, other than rolling an already injured ankle at mile 14, making the second half of my race fairly slow, I came in at 7 hours, was aiming at sub 6). I never realized how good and solid the trail running community is, especially at ultra distances, because I’ve been purely a solitary runner up until now. It has even prompted me to start a running club down here in Orange County. Not sure about the name, perhaps Runners of Rohan (thanks to my wife, who knows my insane love of Tolkein). We’ll see how that goes.

2(b) What did you learn during your first race?

I learned that Calories are insanely important. After about two and a half hours of running I started eating gels consistently, and by that I mean every about 40-50+ minutes. It wasn’t enough and I bonked pretty hard for about 20 minutes there, running was slow and I sat down for about five minutes. I learned that I can run and eat solid food with no issue. ‘Unbonking’ during a race and at longer distances is easier for me than it is at a shorter distance (I think part of this has to do with knowing bonking on a 7 miler is just wrong and shouldn’t happen, while at longer distances it’s always a danger, and therefore just an accepted consequence). Salt is awesome and beer is the best recovery food.

3.  I understand you like beer. What’s with the magnetic draw between trail runners and beer?

I’ve actually thought a lot about this question. Beer is almost synonymous with M.U.T. (Mountain-Ultra-Trail) running it seems. Whereas many serious road runners I know don’t drink at all, or very little. I think part of it comes from a certain romantic ideal and feeling we give our sport. This is not to say that it means the nature of the relation is negative, quite the opposite, I think it’s great. Ultrarunning is pretty damned badass. I’m not claiming we can get in the ring with world’s best fighters, but there is something very…cowboy-esque about what we do. We run in the wild, a lot of us by ourselves, for very long distances, and have to fight with some very real obstacles (wild animals, intense weather, busted bodies, wildness) and demons. It’s extremely demanding.
Beer (no matter how fancy it’s getting) is a working class drink, whether you pay $2 for a PBR or $25 dollars for a bottle of Sour in the Rye. We are working class runners largely, and that attitude pervades in this culture of ours, I think. Besides, does wine taste that good after running for 8 hours in the mountains? Hell no, beer does (and maybe a little whiskey after that). We arguably also don’t need to watch our diets as closely as other runners (although you should, I myself eat pretty well, and am vegan), so a couple beers here and there isn’t going to negatively affect us.

4.  What’s your favorite running shoe and why?

My all time favorite trail running shoe is the very first version of the MT110 from New Balance. The Orange and Blue colored one. It is the absolute best fit for my foot, the last was perfect, the slight build up on the lateral side. It fits like a damned glove. The upper ripped pretty easily, one small manzanita branch and you’re screwed, but I loved it anyhow. My next favorite (since the original MT110 has been discontinued) is now the new Montrail Fluidflex v2. It doesn’t suck my foot into the shoe as much as I’d like, but it breaths well, is super light like the MT110, drains fairly well, has ample room in the toe box, and has that wonderful balance of enough protection with good ground feel and a low drop.

I have absolutely no idea where it will be. On the one hand, you can see the crazy growth that’s happening. Prize purses and sponsorships are getting bigger and more common. It could get very big. On the other hand, sports that tend to be A LOT of work and time like MUT running, usually push people away from it after awhile. The real core are the average runners, and not just the pros. If the sport pushes people away, that core will never be gigantic. Either way it will definitely be more popular than the other waves of popularity it had before, but it certainly won’t ever be as big as say, cycling. Personally, I would like to see it grow just a little more than where it is now, and then keep steady there. Right now, most people have their ideal gear and shoe choices (a direct outcome of MUT running’s popularity) and I’d like to see it stay there instead of the pool of resources retreating again. No matter what, I’ll be running in races and in the mountains.
Ideally, I’ll be in grad school, with a kid, and enough time to still get out for longer runs on the weekends and some shorter ones during the week when I can get them. I would like to get a bit faster, I’m not slow, but I can’t seem to get under 190 lbs. An extra 20 would do wonders for my speed and my rock climbing.