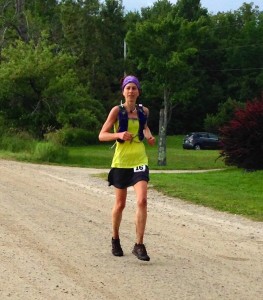 Status: Not married, no children, but in a relationship

1. What run or race are you most proud of?

Probably Virgil Crest 50 in 2012.  It was a tough race compounded by the worst torrential rain I have ever experienced while running.  It was the kind that hurt when it hit you.  My pal and I looked up and saw a pink sky at about 7 am so we knew we were in for it.  It took me an extra three hours to finish in knee-high mud with waterfalls down the middle of the trail, plus I was verging on hypothermia for the last 4 hours .  I was totally traumatized after that…no more racing in the rain.

Interesting question.  I am currently signed up for the West Virginia Trilogy, but after much soul-searching and contemplation, have decided to punt.  This has never happened to me before and I don’t know what to make of it, but the only other time in my life I felt this strongly about NOT doing something was right before my wedding.  I should have listened to myself back then, so I decided to listen to myself now.  So, I just signed up for the Big Brad 50k in Maine to work on getting my mojo back.

3.  Do you stretch or do any other injury-prevention activities?

I am a jerk and don’t really stretch unless something is really asking to be stretched.  I do use Trigger Point Rollers. I take glutamine after every run over an hour, try to stay off the roads, pray…

Vodka.  Just kidding!  Not really.  It can be anything!  Sometimes I want nothing but plantain chips or maybe it’s straight up fillet mignon or cookies.  Since I have celiac disease and many food allergies, I don’t eat actual food during races, just Hammer products, so I can get pretty excited about post-race refueling.  Basically, whatever comes to mind during the race is what I aim for right after…like Vodka.

5.  What advice do you have for people who’ve signed up for their first 50k?

Don’t think about the distance.  Just break the race up into sections and go 8 million times slower at the beginning than you think you need to. Also, don’t overeat the night before and keep your nutrition during the race as simple as possible.

Bonus: What’s your favorite beer? (but I’m guessing I know the answer…)

Vodka.  Gluten free beer is just…well, why bother, ya know? So, it’s Ciroc Vodka for me all the way.  The coconut flavor with St. Germaine and lime juice is the stuff dreams are made of.

Have you had an experience like Jill had in question #2, where you have an unexplained feeling not to run a race? What do you think caused it? Do you regret the decision, or did you find out later that it was the right one to make?

4 Responses to "5Qs with Jill Puleo"