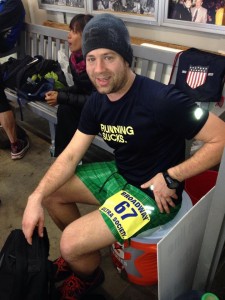 Hometown: Port Washington, New York
Age: 29
Family status: Not married but I’m fortunate to have a girlfriend with similar interests that tolerates my need to go for 5hr runs on Saturday.

1) How often do you race? What distances?

I have been running since early 2011. It all began with a Spartan Race on Long Island. I had been largely inactive since high school. After that I ran the NYC Half Marathon in March 2012 followed by the half marathon distance North Face Endurance Challenge at Bear Mountain in May. That was my first trail race. After that I was set on running an ultra and trails from then on out. I just loved being out in the woods for hours. I try to get in two goal races each year, one in the spring and one in the fall. Ill do a few others in between. To date I have run two 50K’s a 6hr race (got in just under 35 miles), and a 50 miler. I’m planning for another 50M in September/October of this year.

2) What did you learn in your last ultramarathon?

My last ultra, the North Face Endurance Challenge at Bear Mountain, NY was my first 50 miler. If you don’t know the 50 mile North Face Bear Mountain course, it is absolutely brutal. Super technical and super wet this year. I learned a lot, both about myself and ultrarunning in general. Last year I ran the 50k there and totally blew up around 22 miles. It was my first 50k and I went out way to fast. I did not stick to my hydration and nutrition plan and wound up super dehydrated and bonking like crazy. After sitting at an aid station chugging water and GU Brew for around 30 minutes, I proceeded to shuffle my way across the finish in about 7:30.
Cut to this year. Going into my first 50 mile race facing strict cutoffs and an insanely technical course with 16k feet of elevation change. I was petrified. I drove my girlfriend nuts the week before, mulling over every minute detail of my race plan, checking and double checking my drop bags, obsessing over everything (Sorry Jackie & thanks for putting up with me!). I was doubting my training, my ability to finish in my goal time, let alone just finish the distance. I had nightmares about the previous years race and dreaded a repeat. I was self destructing before I even hit the starting line. What I failed to realize was, that race was a year ago, 2000k’ish miles ago. This year I was aware, I stuck to my plan.  I was draining my handhelds between aid stations, eating a hammer gel every 45 min, had some pb&j after 40. I power hiked any significant uphill and pounded the downhills and anything flat as best I could. I was so scared by the time I hit mile 40.

I was waiting for the wheels to fall off but they were on tight and nothing was stopping me. I was passing people who hammered past me earlier that day and I was feeling fantastic.

I finished in 11:23:21, beating my goal of 12 hours by over 30 minutes. Through all that, what I learned was, you have to trust your training and run your own race. Cliché I know, we hear this all the time, but until you really suffer and learn it for yourself its hard to do. This race was a real confidence booster for me. I’m more aware of myself and abilities as a distance runner.

Banana. I love bananas but they have no place in gel form. Just disgusting. Hammer Montana Huckleberry FTW.

I’m not what you would call someone with a runners build. I have shorter legs then most runners, but they’re built. Speed has never been my strength but I can climb and I do well with anything technical. I’ll take a technical, rocky, hilly race over flat and fast any day.

All around favorite right now is Bell’s Two Hearted Ale. Just a great IPA. Since its been warming up though I have been enjoying some Dogfish Head Namaste and 21st Amendment Hell or High Watermelon. Both are great summer beers.