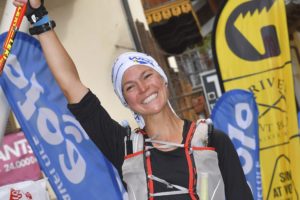 Here’s our interview with Stephanie Case from February. Mere weeks after falling down a mountain in the Swiss Alps, getting helivacced out and spending a week in the iCU, Stephanie joined Sarah and I to talk about what would be next. How in the world would she run Western States in four months? 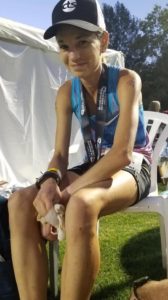 And Kaci Lickteig, odds-on favorite to win the race and bearing the targeted F1 bib from her 1st place finish in 2016. Kaci came into the race fit, anxious, and ready to defend the crown.

And here’s our interview with Kaci from a few days after Western States 2017. Her body reacted to the emotional toll of caring and worrying about her Grandmother and she dragged herself out of the canyon ready to quit.  Out of pure grit, mental strength, and a friendly (and stern) hand from Stephanie, F1 crossed the finish line in just over 24 hours.

Now put all that together, and here’s an excellent photo/written essay from Strava (written by Kyle McCall with images from Matt Trappe and Ryland West) that took place at the infamous river crossing at Rucky Chucky where Kaci found her spirit and found a friend in Stephanie. Be sure to check out that page…it’s fantastic.

As much as I like tough competition and fighting for the final place, I can’t think of a story that embodies the ultramarathon/trail running spirit like this one.  Two champions with their own unique stories helping to drag each other to the finish line. Lessons were learned, smiles were had, and friendships bonded.

3 Responses to "A Tale of Two Women"