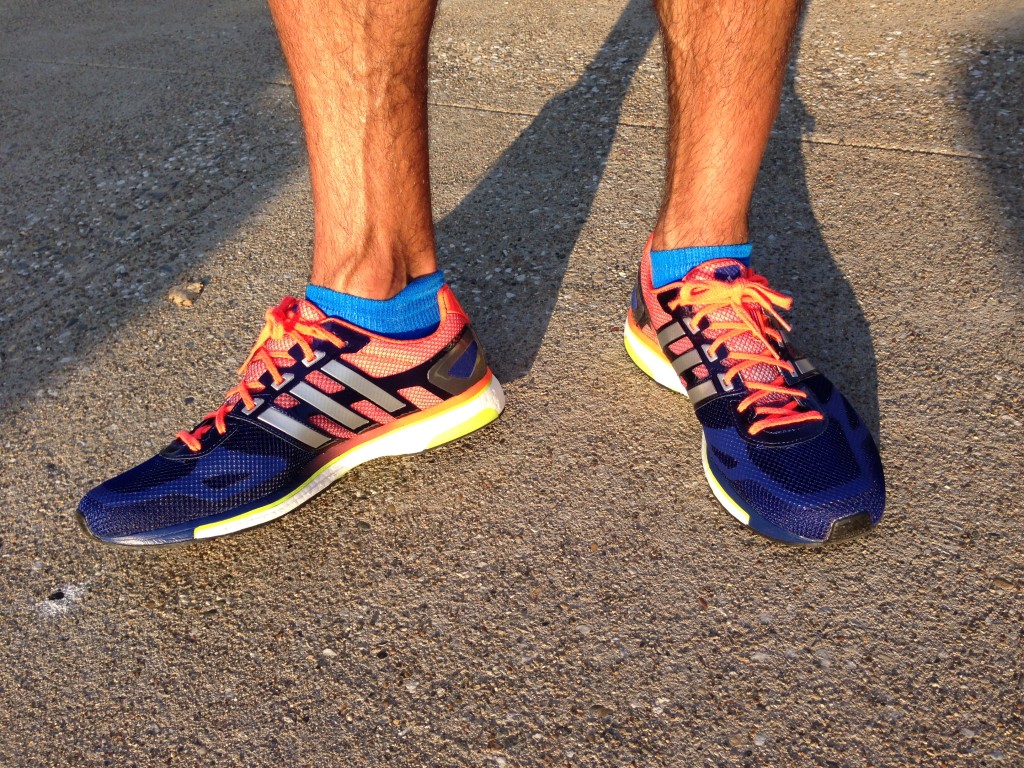 [ed: This shoe has been on my radar for awhile. Though it’s clearly a road-centric shoe, its popularity with top-tier MUT runners means it deserved to be checked out.  Please enjoy.]

In the weeks leading up to the California International Marathon in December, I found myself looking for a racing shoe to replace my discontinued and well-worn Brooks Green Silence. My requirements for a racing shoe is that it weighs under 8.5oz’s, had a non-minimal drop (over 6mm), a narrow heel, and a roomy toe box. As I was training in the New Balance 890v4, I took a look at the NB1400; it wasn’t meant to be, the toe box is far too narrow. Had I only known about the Adidas Adizero Adios Boost.

The Adios Boost looks like several of the other marathon racing shoes currently on the market. 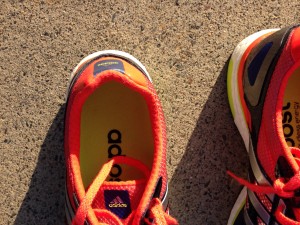 Bright colors, technical mesh upper, low profile, and minimal tread. The shoe also has a thin tongue and is very flexible. A major difference that I immediately noticed was the midsole; it looks as if adidas used Styrofoam to construct it. The midsole is made of Adidas’ Boost energy-returning midsole, which they claim increases energy return and durability as compared to conventional EVA midsoles. With a 12 mile run with several sub-marathon paced miles on the schedule, I was ready to put Adidas’ claims to the test. What’s more, as a runner who typically averages 54 miles a week, I was ending a 106 mile nine day stretch; so my legs were good and tired.

Dare I say the adidas Boost fits me better than my faithful Green Silence….Yes! The shoe has a 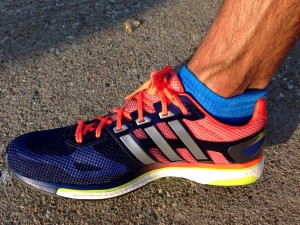 narrow heel that did a great job locking down my heel. The upper is snug around the instep and the flat laces secured my foot without putting too much pressure on the top of my foot.

The fit feature I was the most excited about was the toe box; it’s wide without being sloppy.

Upon putting the shoe on it felt light, nimble, and flexible. During the run I didn’t notice any rubbing, chafing or uneven pressure. I wear a size 9.5 in Brooks, New Balance, and Nike, and the adios Boost fit true to size. For those of you who are thinking about combining the adios Boost with adidas’s Boost trainer (the Energy Boost) for your training/racing arsenal, I wear a size 10 in the adidas Energy Boost. 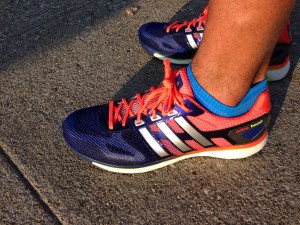 Starting my 12 mile run, I was concerned that my legs were too tired to provide the shoe an adequate review. My first three mile were between 9:02 and 7:10 pace; unlike some racing shoes, I didn’t notice any “slapping” at this pace. The shoe felt secure, stable, and somewhat soft.  The following three miles were between 6:26 and 6:13 pace. The adios Boost really excelled at this pace, serving as a firm, responsive racing shoe. I can only describe the toe off as “snappy.” Maybe it was the placebo effect, but I did feel like the effort I was putting forth was less than I would have expected for the pace I was holding, especially considering how tired my legs felt at the beginning of the run. My final six miles were between 6:07 and 5:53 pace and this is where it got scary; I completely forgot I was wearing new shoes. It wasn’t until I started my cool down that I remembered that I was wearing the adios Boost. The shoe felt softer at slower speeds, but never “mushy,” and firmer at faster speeds. 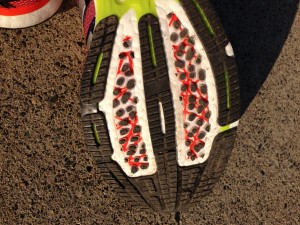 I normally land on the outside of my forefoot while running, except when I’m going downhill; then I land on my mid-foot. I noticed the Boost energy-returning midsole felt very shock-absorbing when I landed on my mid-foot.

I was able to test the shoe on a small portion of trail and a couple of icy bridges. The Adidas 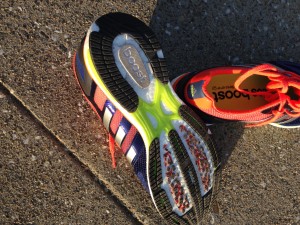 outsole with continental rubber provided better than expected traction on the bridges and slick rocks. Because of that, I could see myself using this shoe as a 50k and under trail racing shoe.

The price: $140! I’ve read some information claiming that the Boost energy-returning midsole will last longer than the typical EVA. Even if that’s true, if the upper and/or outsole don’t last longer, then the price could be a major non-starter for some.

This is a great shoe for someone who is looking for a racing shoe that has an ample toe box. The price might have dissuaded me from buying it, but now that I’ve worn it, I could see myself 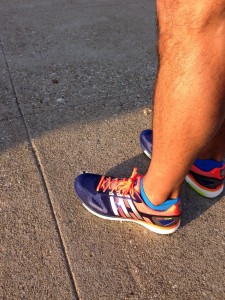 paying for it in the future. There is a very high likelihood that this shoe could find itself on my feet at the start of the Way Too Cool 50K in March.

[ed: This review was written by URP friend Jesse Barragan. Jesse is a 2:43 marathoner and mid-4 trail 50k who runs half his miles on trails, half on road.  I chose him because we both share a love for the discontinued Brooks Green Silence and are on a mutual quest to find a replacement. Jesse was provided the shoes with zero expectation of a positive review. The thoughts are all his own.]