[URP was contacted to perform a shoe review for Altra Zero Drops, and since Scotty nor I run in flats, we asked two listeners to help out and give us their opinions.  One is a veteran minimalist runner, the other is exploring zero drops for therapeutic reasons.  Both pairs of shoes were provided to the reviewers with no expectations of a positive opinion. The thoughts are all their own.] 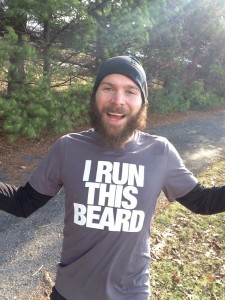 Nicklaus Combs has run in Altras before and is a seasoned minimalist runner.  Though he’s an Altra Ambassador, this review was written prior his relationship with the company.  Nicklaus lives in Virginia, races around the country, and blogs here.

I’m often asked by people who are new to trail running whether or not they NEED trail specific shoes. This questions proves quite difficult and unfortunately is typically answered with “it just depends”. Even i find myself running road specific shoes for a lot of trail races these days and really only will go for a shoe with more traction if the weather proves uncooperative. 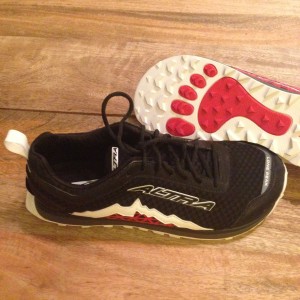 The reason? I still find that, generally, trail shoes fit into two categories:

Almost as an after thought a trail shoe has been created and neither option is really appealing to me as a consumer.

The Lone Peak 1.5s are finally a shoe that I can say. YES. Here is a shoe that has enough unique features to provide runners of any skill level with enough good reasons to justify moving away from just running any old road shoe out on the trails.

Looking through Altra’s footwear line they obviously stick by a few common principles for all their shoes:

I’ve had these shoes for almost a month now. In that span of time I’ve run a technical 40 mile trail ultra, faster road runs as well as running trail during wet/muddy conditions. Basically I’ve hit these things with just about everything possible thanks to the unpredictable Washington DC winter weather.

My overall consensus? They make for an absolutely fantastic all purpose running shoe. The sole grips very nicely on road even when pouring rain outside, the rock plate provide ample protection even on technical rocky trail, & the stack height provides enough cushion to leave my feet feeling fresh even after a 40 mile run. I could see myself rotating a few pairs of these in and out regularly for all my training runs. 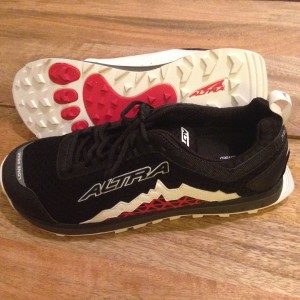 Black. Finally. Seriously: FINALLY. I’ve been waiting for a different color option than the red that was initially released. This is fueled in part by my love of black and grey. As well as the desire to wear this shoe casually to the office along with running in them. Though I have no doubt the original red color scheme would get plenty of comments during the work day.

I ordered a size 11.5 and got sent a 12. I’m thinking the trail gods intervened here and sent me the better fitting size for my feet. I typically will wear an 11.5 in a day to day running shoe only sizing up for a shoe that I will wear in a 100 miler. Despite sizing up a half size the shoe itself still hugs my feet very nicely. The upper is mostly seamless and to be honest I couldn’t find a seam that would rub while moving my feet around the inside. The toe box is nice and roomy allowing my toes to completely spread out without really touching either side which should help some of the blistering I get without fail from a traditional toe box. The tongue is gusseted in this model and padded nicely along with some extra padding along the ankle area for extra support. The shoe is also marked as vegan friendly which is a nice addition for those interested in such a product.

Most importantly though. They just feel good when I have them on. I can’t attribute it to one thing or another but they do what all shoe companies strive for first and foremost. Comfort. 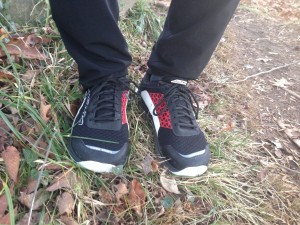 shoe that I would absolutely recommend to people in the future (over other shoes that have added some trail running elements as an after thought):

Despite all my praise for these shoes I do still have a few complaints. 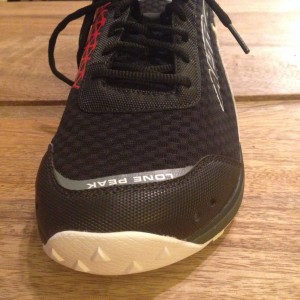 My heel does lift a bit when running in the shoe. Cranking down the laces tighter than normal helps and the heel never comes close to slipping out but it is still noticeable compared to other shoes. I’ll also admit this could be related to sizing up a half size but again I don’t typically have this issue in other shoes that are sized up.

Rock kicking. I’d love to see some toe protection because let’s be honest…Since these shoes were designed to tackle ultra marathons (including Wasatch 100 as advertised) you know you will be kicking a rock or two by accident along the way. I’ve yet to run them past 40 miles but I’m not so sure how they would fare against a more well cushioned shoe (like Altra’s soon to be released Olympus or a Hoka model) in longer races but i know this is going to be my pick for anything less than 50 miles. 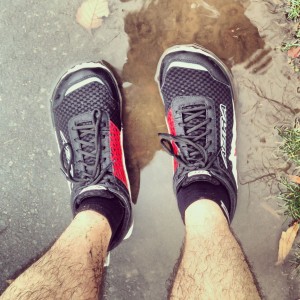 In the Lone Peak 1.5s, Altra has really refined and progressed an already successful trail shoe. There still are some improvements that would really help to propel this shoe to the forefront and make it THE trail shoe you have to own–however there is much to love here.

This shoe can handle just about every type of terrain, distance and trail conditions you could possibly throw at it. It’s certainly light enough to race shorter trail distances in as well as hold its own on longer ultra marathons. With the pending 2014 release of the updated Superior and the new Olympus models there will be something for every trail runner from Altra very very soon. I’m incredibly excited to see how this brand and company continues to progress. 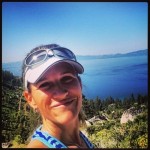 And here’s Pamela’s review.  She’s new(er) to zero drops and had just recently purchased her first pair of Altras. Pamela blogs at TrailMomma.com and lives in Northern California. 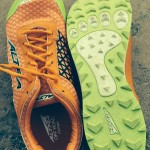 A week before I received the Altra Lone Peak 1.5 shoes to review, I had purchased the Altra Superior trail shoe. I have never run in a “zero drop” shoe before but I had read that Altra shoes were designed to reduce ankle sprains. Having just had ankle surgery in September and the fact that I still battle rolling or jamming my ankle on every trail run, I figured why not give them a shot.

Altras are zero drop shoes meaning that the foot position is level with the ground and they are often classified as a natural running shoe.  Not be confused with a minimal shoe that has very little cushioning, Altras have a fairly moderate cushion to them.

Both the Superior and the Lone Peaks are trail shoes. I simply went with the Superiors because that is what my local running store carried. When I put them on, I could tell immediately that these were not going to be a shoe I’d like to wear on a rocky or technical trail as it felt like I was wearing slippers with no traction. 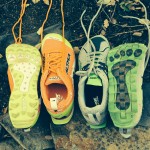 Altras was their extremely wide toe box allowing the toes to have a natural position. Also, as someone with larger than life bunions, I thought this would be a perfect fit. I was then asked to review the Lone Peaks.

Out of the box, the Lone Peaks are definitely sturdier and a lot less flexible in the “bend test” that most runners do with new shoes. I liked that. What I wasn’t entirely fond of was the electric orange color but that’s cosmetic and seems to be a common theme with a lot of running shoes these days (they now offer them in black).

Along with the shoes, you are provided with a pamphlet that gives you some instruction on how to “ease” into wearing the shoe if you are not used to running in a zero drop. The recommended period to transition is three weeks. This is important because if you are not a patient person (ahem), you might have some difficulty with this.

My first run was 3 miles and immediately I noticed that my ankle felt good almost stronger. However, I also noticed I was running on my toes and I am usually solid heal striker. The next run I jumped the gun and ignored the 10% rule and wore them for a 6 mile run. Everything seemed okay except it definitely felt like the shoe was slipping off my foot causing me to stop and retie my laces a few times. One thing to note about the laces on these shoes is that they are incredibly long. I had them double even triple knotted and I still heard them flapping against my shoe when running. I also have a narrow foot and had to squeeze the laces pretty tight but the shoe still slips off occasionally.

By the third day of running in them I noticed a significant twinge in my knee (a very familiar ITBand twinge if you know what I mean). Red flashing lights went off in my head. I’ve had IT issues before and it wasn’t pretty and it lasted a while.

Upon some research it seems Altras are ideal for mid-foot to forefoot strikers (oops). I also knowingly ignored the transitional phase recommended. I rested a bit and decided to try them again on another short run in Auburn.

The material on this shoe also doesn’t seem entirely sturdy enough to sustain significant stream crossings. If we ever get any rain, I’d be happy to test that theory. They do however come with this fancy back flap for those who wear gators. The flap will secure your gator to your shoe. I don’t wear gators, but I did think this was pretty clever.

While the Lone Peaks definitely feel sturdier and have a more rugged bottom than the Superiors, I still feel like they would be too soft to run rocky technical trails despite having a rock plate. I also cannot fathom running longer (ultra-like) distances in them.

For now, I think I will stick to my regular non-zero-drop shoes for long runs and racing especially when the terrain is similar to that in Auburn; not because I didn’t like the Lone Peaks but because I just don’t think they the right shoe for me right now. I WANT to love the shoe as I love how my ankle felt while running in them and that gives me some idea as to how important the “drop” may be for me in that regard but overall, I think my heal striking and the Altras are not exactly a perfect match at this time (I’m currently training for WayTooCool 50k and American River 50). Given some down time away from training with more time to focus on running form, I might return to the Lone Peaks.