A few months ago, my wife and I got the idea to completely transform our lives.

We spend a lot of time in the front yard with kids, neighbors, and Carlos the Poodle, and felt space was being wasted with a flower bed, old walkway, and tiny porch.

“Let’s build a giant deck! We can sit out there, watch the kids, and expand our living space!  Other people have laid brick, it can’t be too hard, right? Quick! Someone bring me the internets!”

We figured that it would be fun, keep us outside, and we could forever say “we did that.”

And so it began. 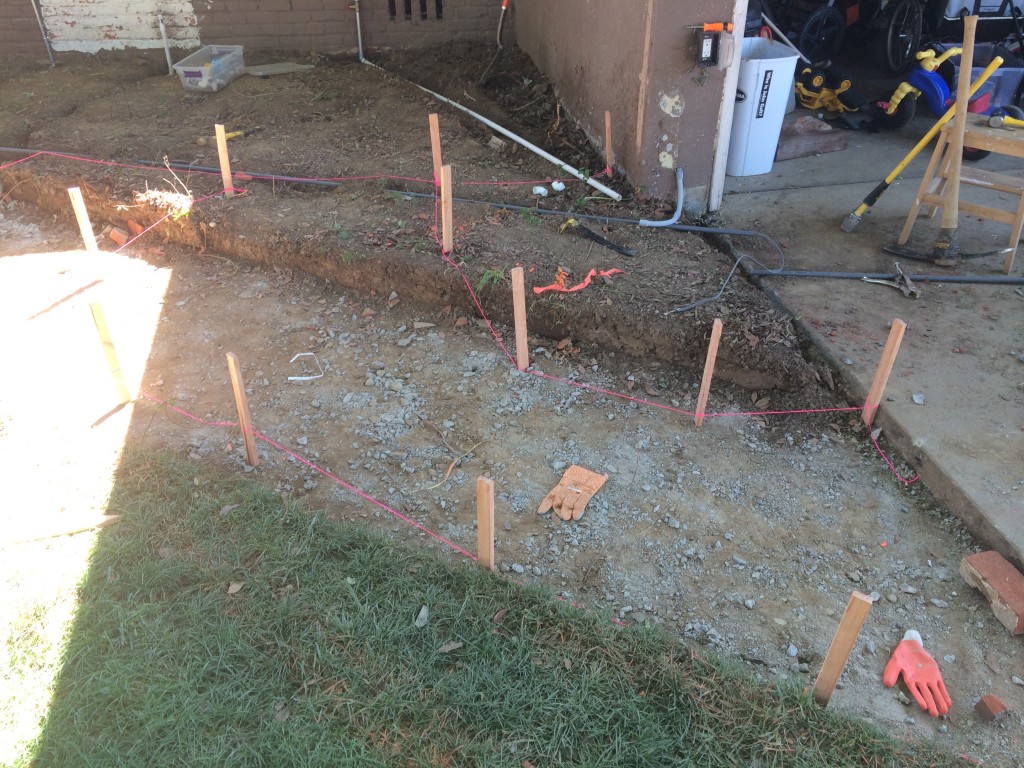 Having never laid a single brick in my life, I jumped on the internet to try to learn all I could. I watched youtube videos on masonry and mortar, and when I ran out, I started watching them in different languages. I read blogs, joined bricklaying forums, and started speccing out size, cost, material, gear, etc.  I read, listened, asked questions, and drove around for hours looking at brick layouts. 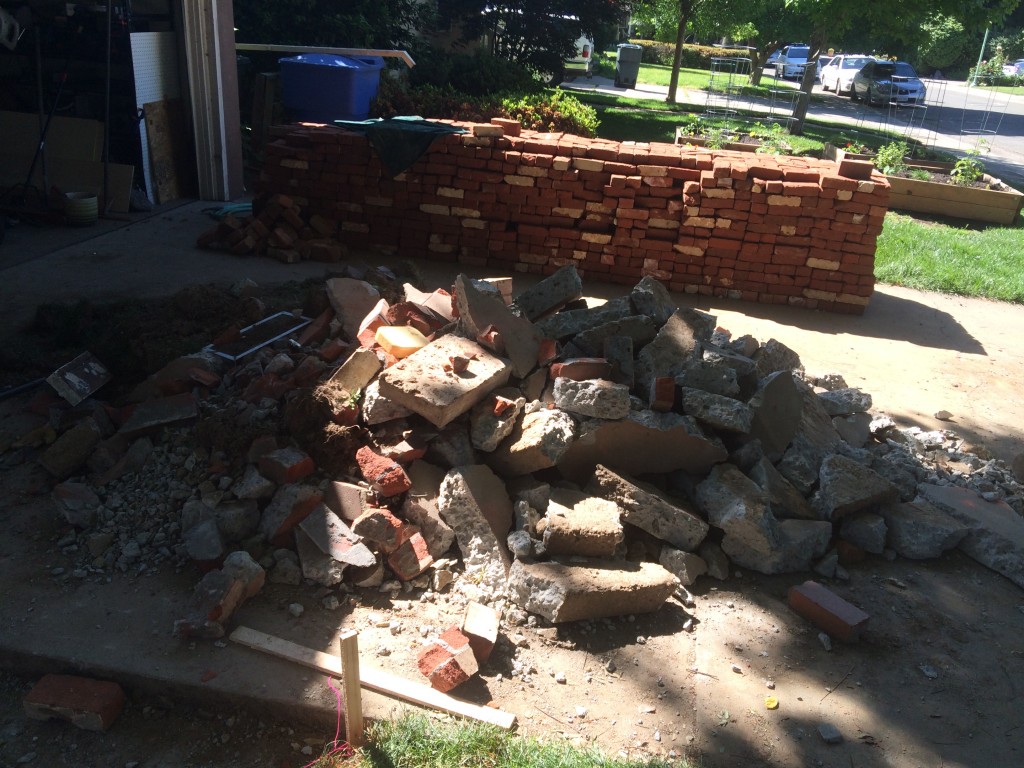 Sometimes ya gotta throw out everything you know and had and start fresh.  For me, it meant a wheelbarrow, a sledgehammer, jackhammer, and a freakin cement truck. Giddyup! This is gonna be fun. 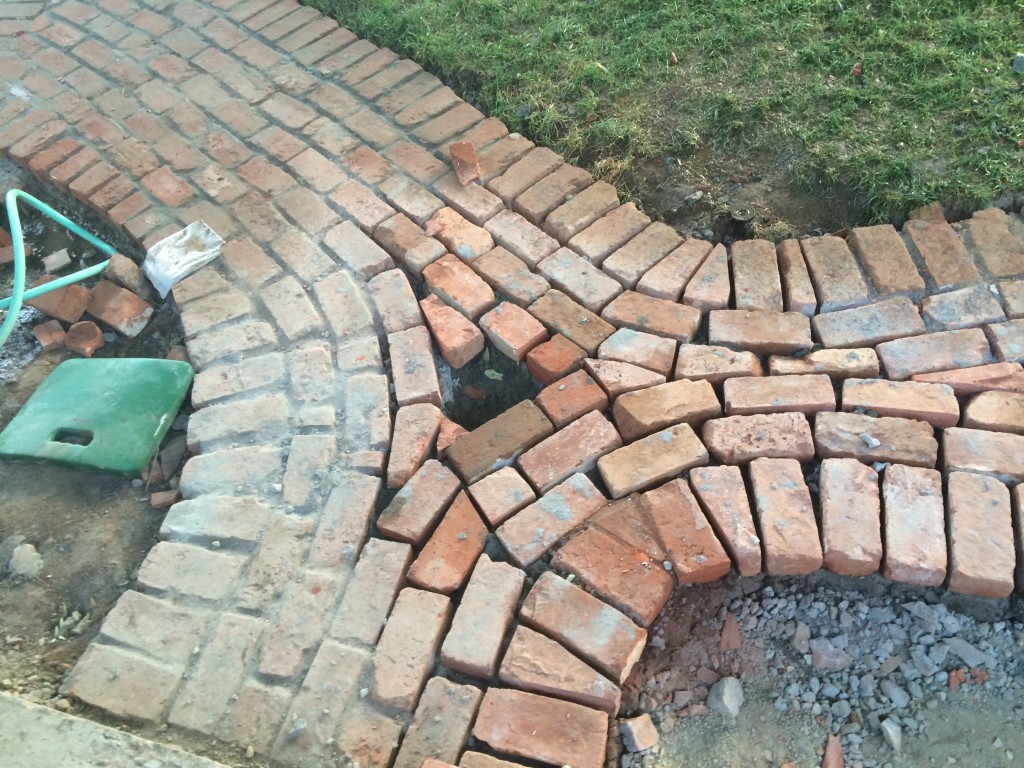 Does this make sense? Go this way? Or that way? Uh oh, what about that turn? How do we handle that part? 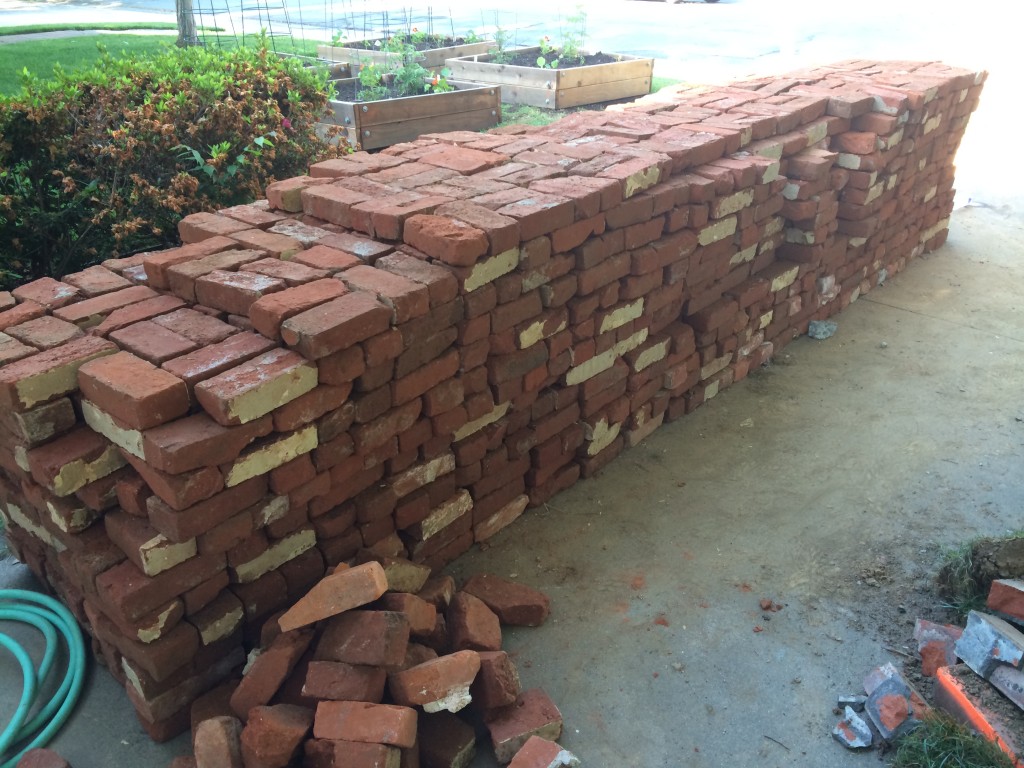 I searched brickyards, craigslist, and HomeDepot for the right brick, and eventually ended up buying 3000 bricks from a 1920s era building that had been demolished in downtown Sacramento. 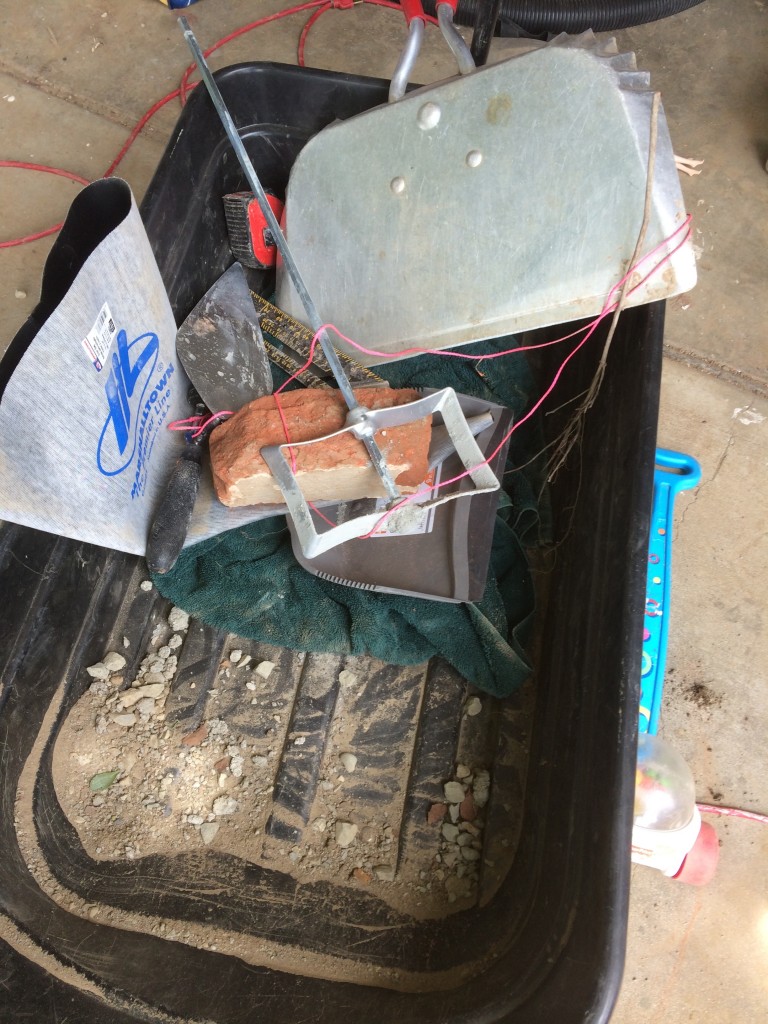 I also bought the nicest pair of kneepads I could find, some trowels (learning pretty quickly which ones I favored, and which ones would be banished to the garage for eternity), some fancy string thingamajig (I saw the pros use it and thought it’d be a good idea…I could never figure it out), and a couple of bags of mortar.  Trowels are crazy…Home Depot offers two brands.  One 10′ trowel is $7, the other is $30.  What’s the big difference? Can they really be that dissimilar???

I’d eventually buy another 40 bags of mortar, and at 80lbs each, feel like I’ve got my upper body work done for the rest of my life.

Into the Great Unknown

When we secured that first brick with mortar, measured it, leveled it, then moved on to number two, we didn’t have any idea how long this would take, how hard it would actually be, or what it would do to our bodies.

The rest of my life was put on hold while this project was under way.  All I cared about, talked about, and did, was bricks. Bricks, bricks, bricks. I looked at bricks on my truncated runs, I hung out in the brick section at Home Depot, and read more about bricks on the computer. Little time for running, shortened hours for URP, kids were largely relegated to stay busy in the front yard on their own while I was working, and eating and bathing took a back seat to trying to finish this job.

I quickly learned that I had to have full support of my wife and family during this six week process.  Whereas I started with her full backing, towards the end, her only wish was that “I wish this was just over!”  It’s really tough to get this done if both partners aren’t fully invested.

Looking At What’s Ahead 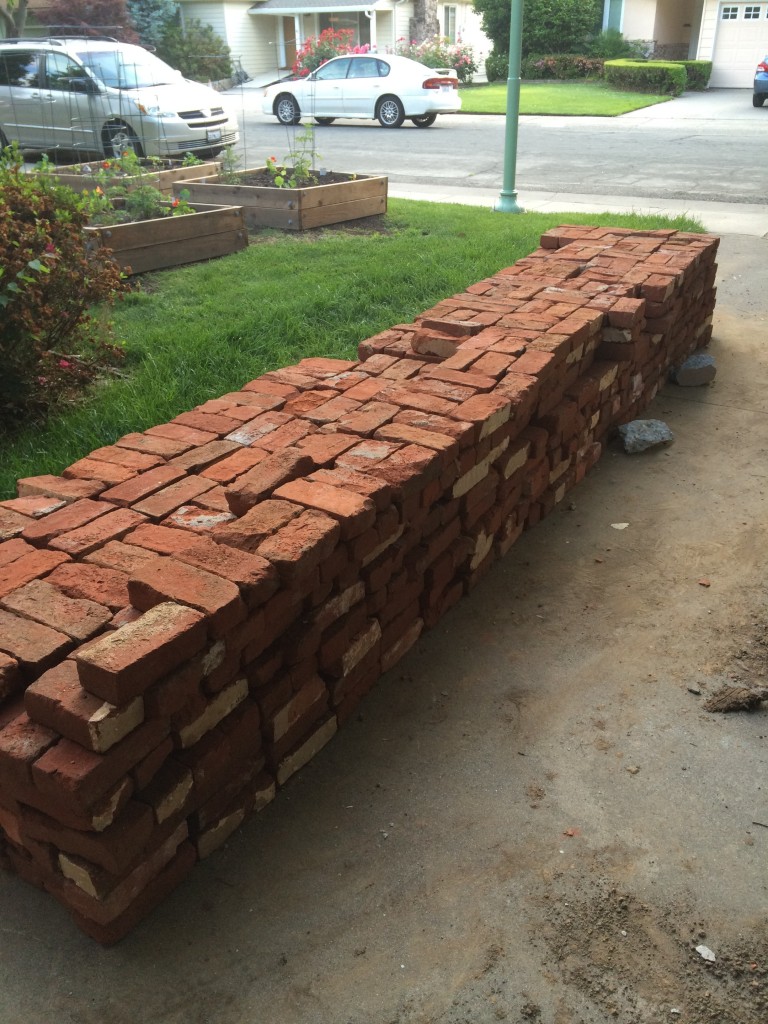 It took me two full days of work to lay my first 30 bricks. Admittedly, those were the first bricks I’ve ever laid in my life, but to say that I was horrified by the thought of laying 2,960 more is a bit of an understatement.  I’d lay one, look at the looming stack across the driveway and think there’s no way I’m going to get through all those.  One brick at a time.

Learning More As You Go

I started getting used to it and had a system going. There were still some days where I got little done, but each day after the first, I got better and better, improved my accuracy and efficiency, and felt more comfortable and confident. I also learned some basic electric work. 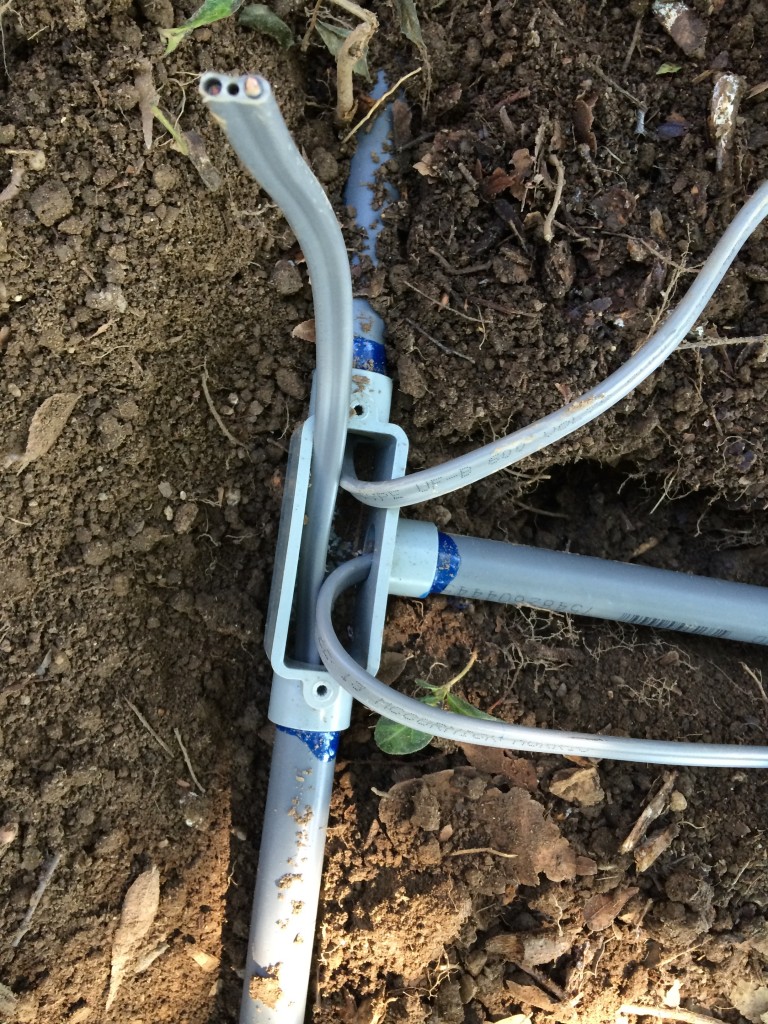 Some things, ya just can’t change.  Some asshat painted the brick on our house 50 years ago, then again in the 70s, and once again in the 90s for good measure.  It was beautiful brick, and getting the paint off is impossible. I’ve tried every method (fire, chemical, air), and now I’m stuck with having to work around it with some creativity.  The guys at the paint store offered some frightening advice…”Buy a new house.”  I don’t give up that easily! 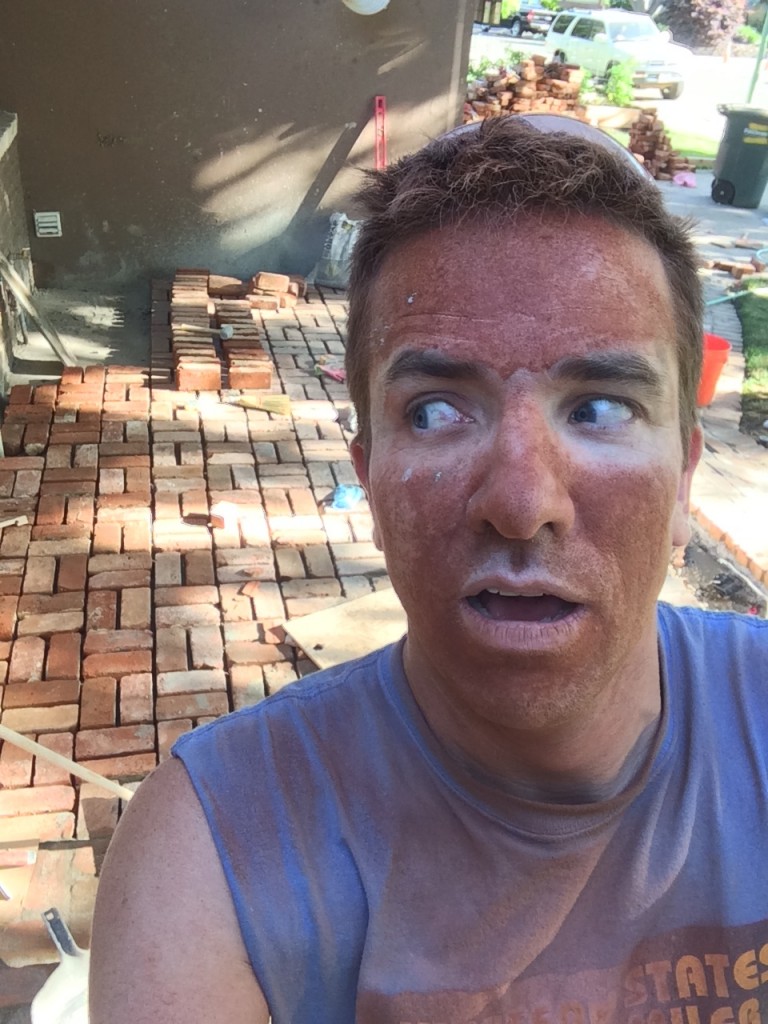 The filth and grime is almost unbelievable.  My face would be covered with brick “juice” from the wet saw, and my legs were/are covered with a coating of mortar (lime, actually) that will not come off, regardless of how hard I scrub. 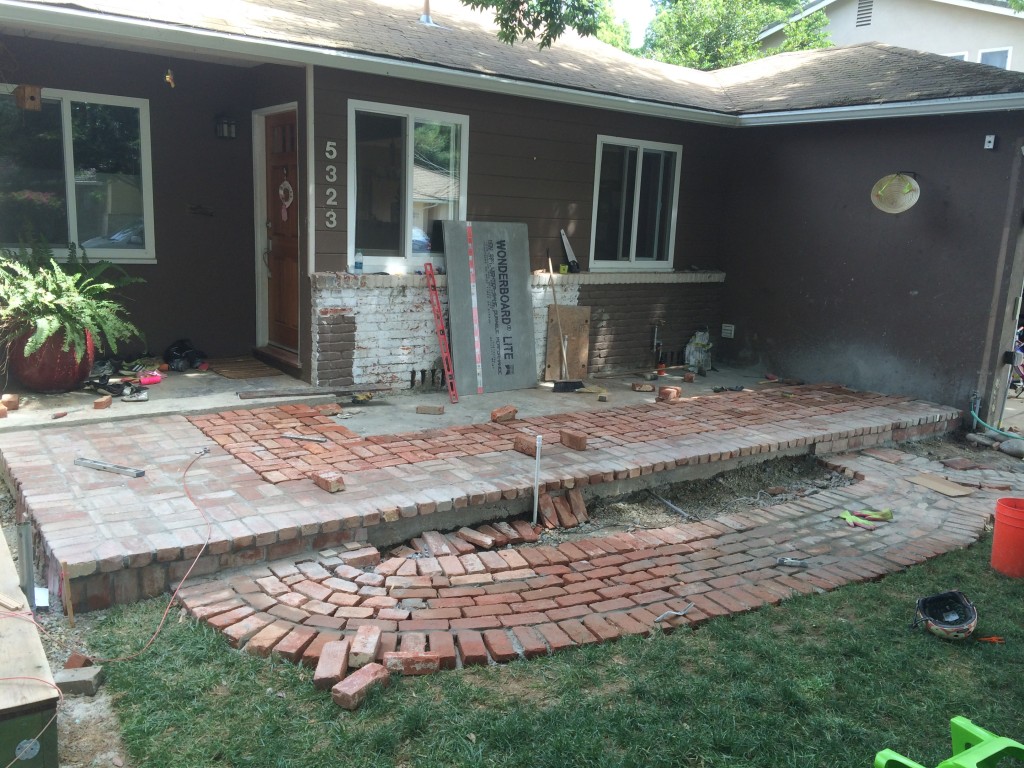 Yep, you lay a “course” of bricks.  Twisty and turny at first with a nasty section that found me making a three-way intersection, followed by a nice, flat, and fast section that took less time than the first.  Finally, a step up to the landing had a few tricky parts, but I was so close to finishing, all I had to do was not make any stupid mistakes and I’d be fine. 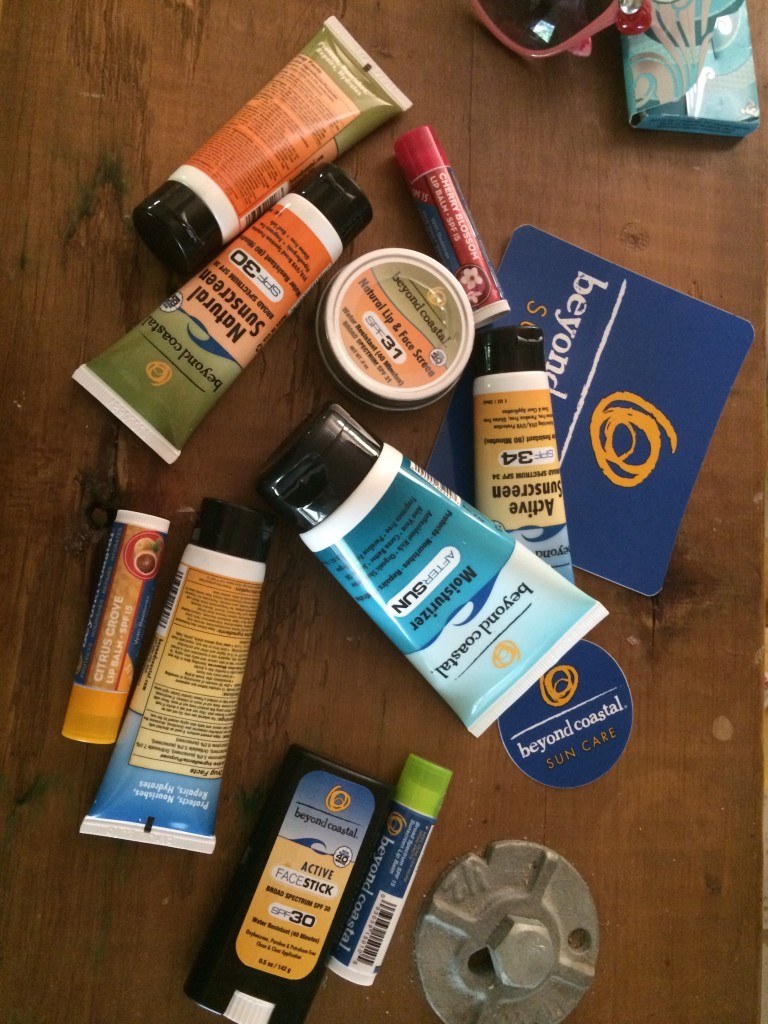 I was fortunate to get most of the work done when temps didn’t get above 90, and with the benefit of our giant Zelcova tree out front, it wasn’t that bad.  When I was working directly in it, I used Beyond Coastal all natural sun block on the back of my neck and back of my legs, as those were most exposed, and had no issues.  Great stuff that didn’t wear off, and I use it for running too. Highly recommended, especially the FaceStick.  Add to it a giant Vietnamese hat, some protective goggles, and I was safe. 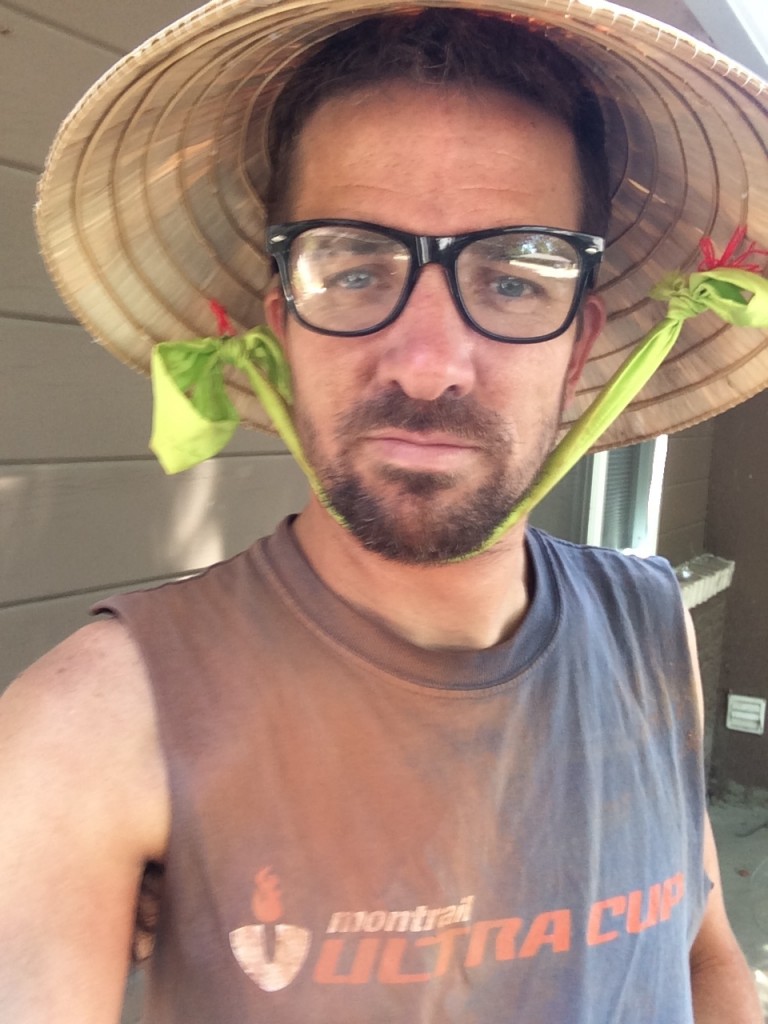 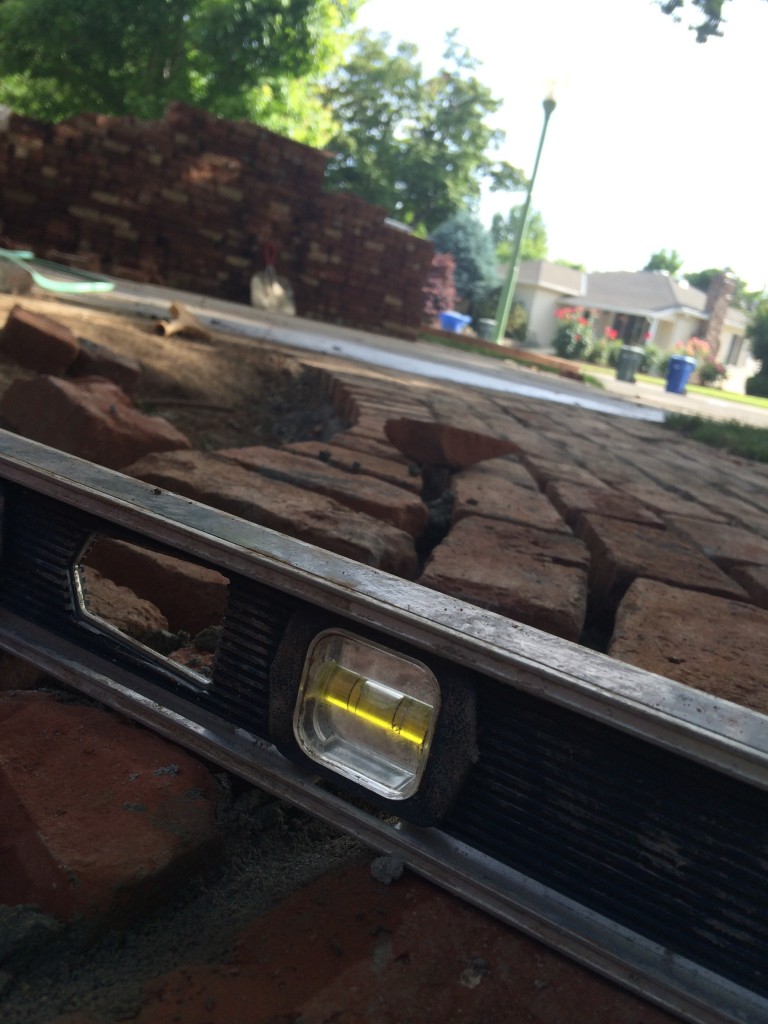 Oooh, so that’s how they do it.  I learned many a new trick and technique, discarded some old habits I had, changed up my gear a few times, and still feel like there’s a looong way to go.

Those first few days and weeks of this ridiculous project were painful. Aside from moving 3k bricks from a yard into the truck, then into my yard, then moving them over to where I would lay them, kneeling over to lay the brick, then getting up to retrieve more material, make mortar, and lift more damn bags had my body a wreck.

The fatigue was incredible.  After the first day, I pulled a gallon of milk out of the fridge and it fell to the ground in an explosion, my tired runners arm unable to hold the weight of a simple gallon of liquid!  And during the first week, my wife stayed home from work, as I was unable to pick up the kids.  I survived on the interesting diet of Midol, Coors Light, Cytomax, and Honey Stinger wafers. Delicious! 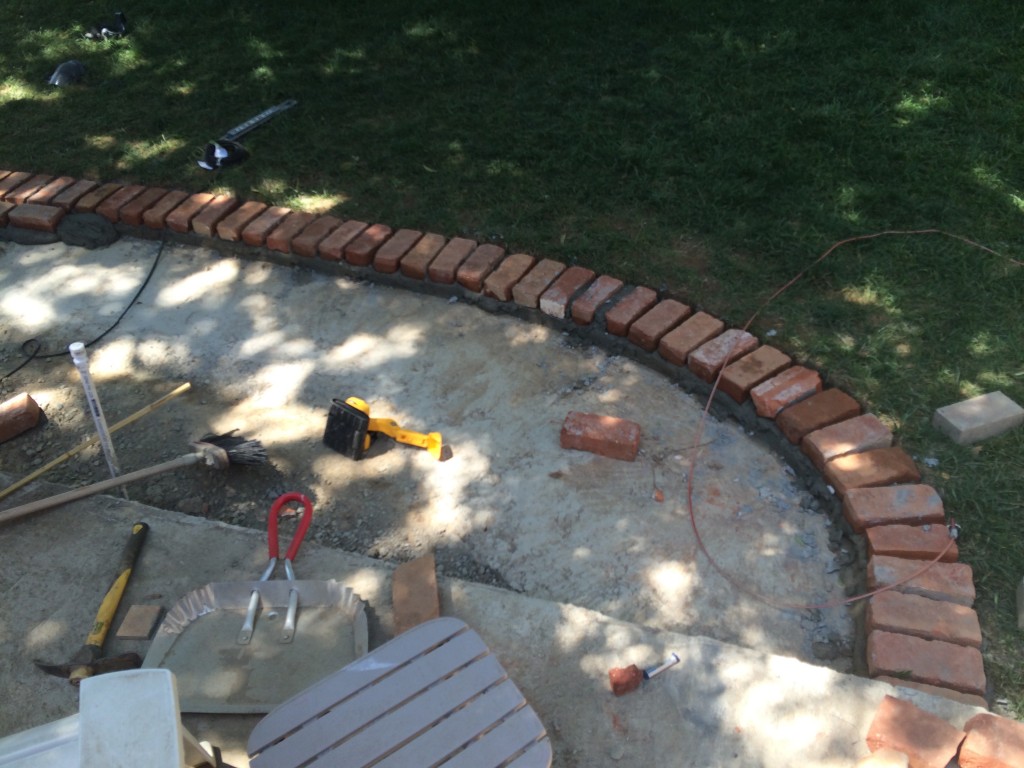 This is not the type of single track I prefer. 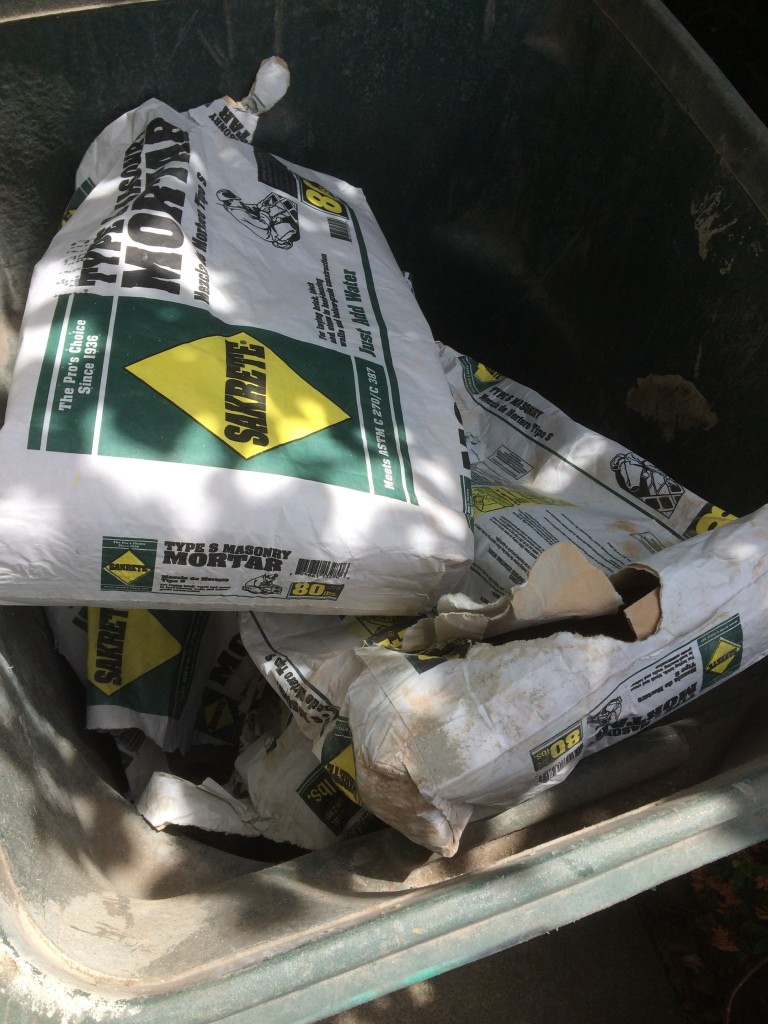 Huge wrappers. I went through dozens of these. 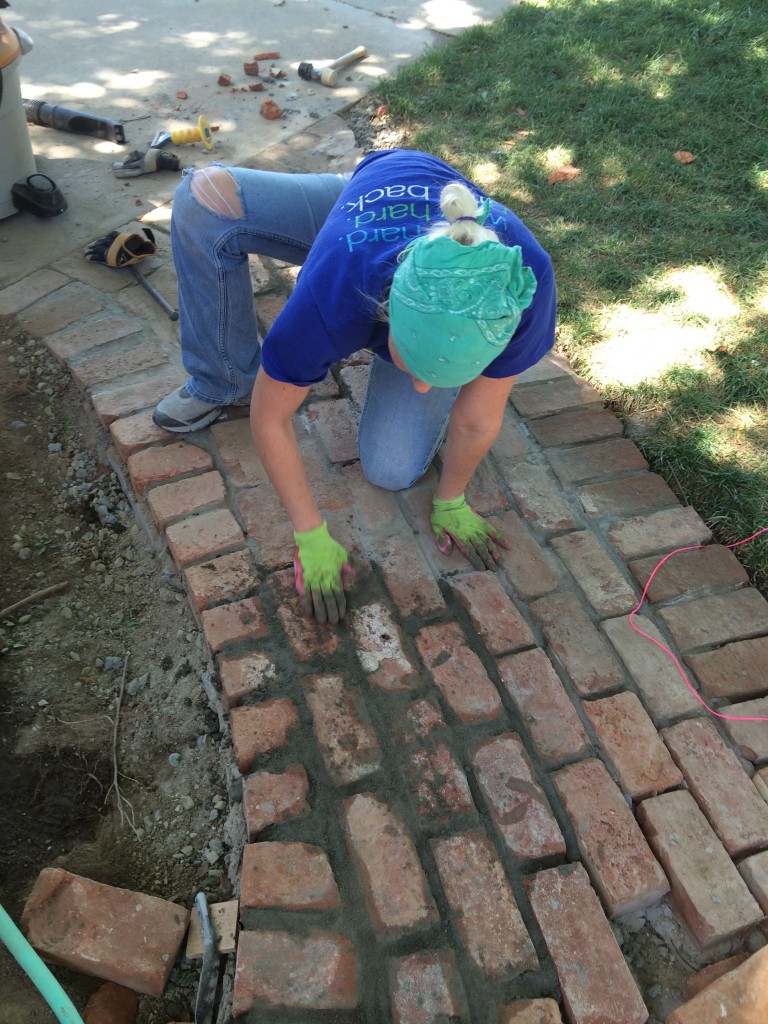 I somehow conned my neighbor’s 13yo son into crewing for me. He’d make mortar, bring me bricks, and help with the heavy moving, and was well worth the $10/hour I paid him.  Unfortunately, I only had him for a few days, but boy I appreciated the company.  Sam also helped out, but the laborer/crew relationship was tough to deal with when fatigue set in. 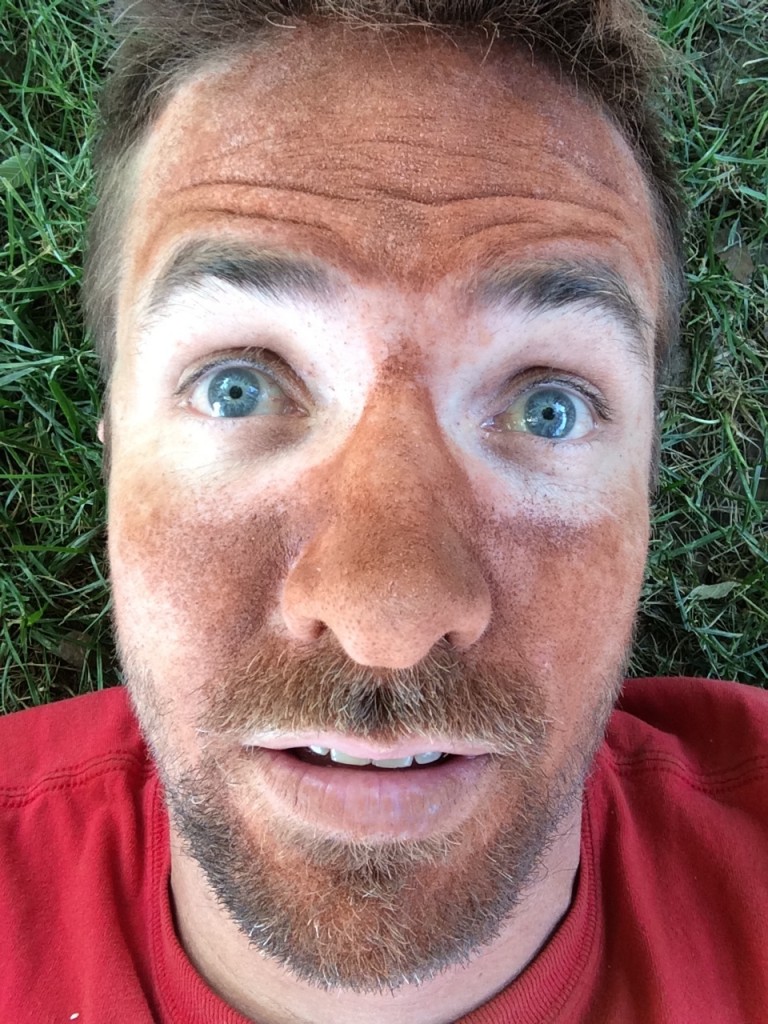 How did I get scrapes and rashes under my arm? And why can’t I feel my legs anymore? 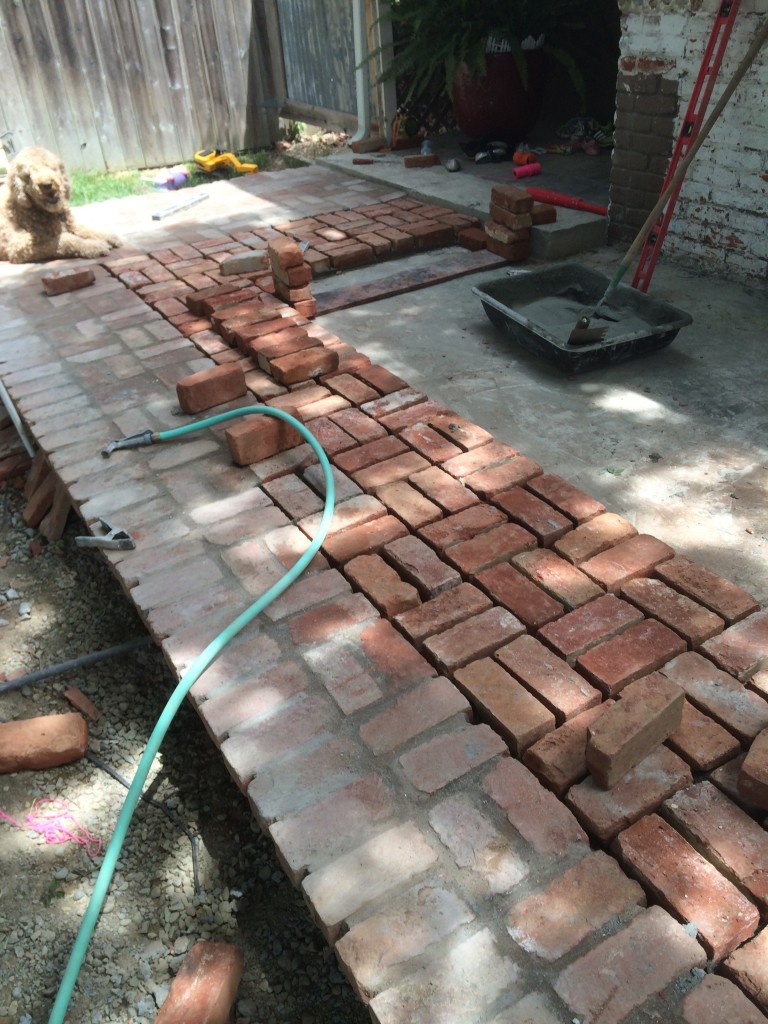 Some days I’d be a few hours into work and look back, knowing where my line had started earlier. That would give me a massive sense of accomplishment and help me push forward.  Now stop dawdling and surge forward, Eric!

I had laid 300ft2 of bricks, and was nearing the final 20ft2 or so and could taste the finish! Don’t get sloppy! I’m not sleeping ’til it’s over! Get outta my way and don’t bother me…I’ve got this!

I learned a whole heck of a lot laying these bricks, but would never consider myself an expert in any way. However, since 90% of the population has never done something like this, I know more than most people and am happy to share my experience. 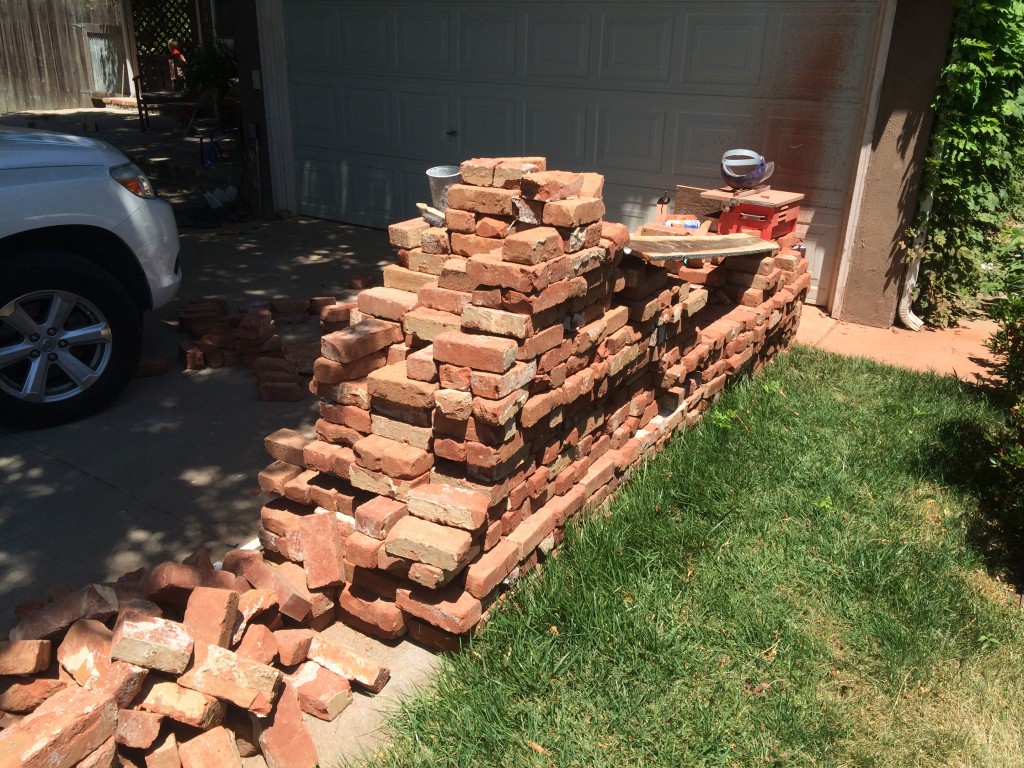 Well, hell. I’ve got about 1k extra bricks in my yard, and though I swore I’d never lay another brick in my life, I’m already considering a BBQ stand in the back yard and a new landing for the patio porch. 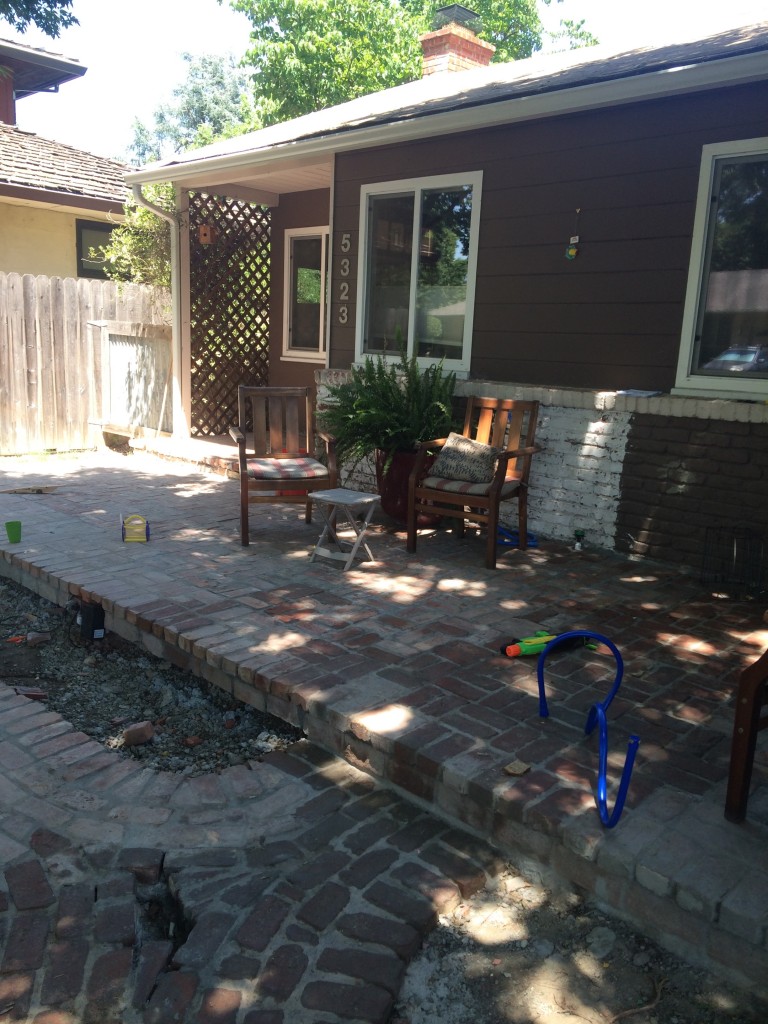 8 Responses to "Brick Laying and Ultrarunning"