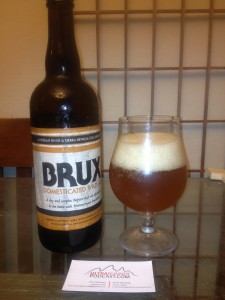 For a beer with this pedigree, expectations are huge.

Russian River Brewery and Sierra Nevada Brewery collaborated on this ale to create a masterpiece, and in my opinion, they fell (partially) short.  Perhaps it was me, not allowing the beer to age long enough, but currently, it’s a good beer, not a great beer.  Really interesting characteristics and a neat drink, but certainly not the “wow” factor I was expecting.

I found it’s dryness and bitterness similar to the Reineart Wild Flemish Ale I had last week, and that’s not a beer I loved.

Let’s get to it.  Pop the big bottle, and smell shoots out of it. Lemon, yeast, and spices.  The pour is a cloudy orange-yellow with a giant head that dies pretty quickly.  When the head disappears, so does the smell, and there’s not a trace of lacing. I’m sure a beer aficionado could explain why, but that’s not me.

This is a really spritzy ale with big lemon and bitter nut, and the taste I’m now recognizing as brettanomyces yeast that’s used in the production of the beer.  It’s the bread/spicy aftertaste that gets me.  There’s a lot of sizzle on the tongue with this, and combined with the lemon zest, can be pretty shocking.  Where as sours and lambics taste like someone dumped a ton of sour fruit into the barrel, this tastes more like a nut or loaf of bread went sour and the brewer used it. Strange. Not bad, but strange.

I’m guessing that this beer will age well–as it’s supposed to–and in a year or two, there will be a well balanced ale that kicks ass.