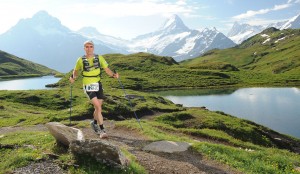 Family: Divorced with a son.

1. How long have you been running?

Very long! After Lasse Virén‘s golds in 1972 Olympics all the kids were out running. Since Finland hired Arthur Lydiard to coach us, his training methods have been most appreciated here. Finnish forests were ideal for trail runs, often in deep snow or steep hills. At high school our gym teacher often let me and my friend to run around freely on our own. In the Army I ran 3250 meters in a winter Cooper test on snow. I was ordered to train 4 hours cross-country skiing daily. After getting out in the 80ies I got proper running shoes, finished my first marathon race in Helsinki, and discovered ironman triathlons. I did a challenging solo 7-day Mt. Tahan jungle trek in Taman Negara. In the 90ies I ran some road ultras like Comrades. After summiting Europe’s highest peak Elbrus (18,510ft and home to ‘the world’s nastiest outhouse’), I was drawn towards mountain races like SwissAlpine.

2. How many ultras are there in Finland each year?

Only about a dozen, but the local ultra trail scene has improved a lot recently with NUTS Karhunkierros Trail Ultra, Vaarojen Maraton, Sysikallio100 and other new events.

That’s easy: a smoothie blended with whatever fruits and vegetables I have is always a favorite – both before and after running.

4. What was your last race, and what did you learn?

Eiger Ultra Trail 2013. I learned that a thunderstorm in the higher Alps is not a joke, not even on a nice summer day. In just a few minutes on a steep exposed slope I was in trouble. It took me ages to put my rain gear on, as the wind was trying to blow my stuff away and I kept on sliding down. I was running inside the cloud with lightning all around me. I was finally able to reach a mountain shelter, but they soon announced that an easy shortcut to the finish must be taken instead of the famous Eiger Trail. I chose to DNF and complete the real course across the North Face on my own the next morning. Mike Tyson put it well: “Everybody has a plan until they get punched in the face”. I got punched in the face by Eiger, but I’ll be back soon – with a better awareness defense to evade whatever Eiger will throw at me!

5. Have you run in the US? If so, what race…if not, what race would you like to run?

Yes, Hawaii Ironman World Championship. That marathon on the lava fields is easily one of my most challenging runs ever. It was like running in a Finnish sauna. I somehow struggled to the finish line with a PR total time. In hindsight, it probably wasn’t such a great idea to run up to the top of Mauna Kea before the race…

I’m still dreaming of running one of those legendary ultra trail races in the US, but the Alps are only a 3-hour flight away. A trip to the US would require way more funds and organizing! Maybe after my forthcoming UTMB 2014 finish – my first 100-miler – I’ll be ready to take on USA 😉

I don’t drink. That said, Erdinger Weissbräu Alkoholfrei really is a fantastic Weissbier. If you think all non-alcoholic beers taste like swampwater, you are in for a pleasant surprise. Erdinger sponsors many sports events and teams in Europe and they often provide plenty of free cold pints after the race. This beer is used and served like any other sports drink, especially in the German-speaking areas. Prosit!