If you listened to this podcast, you know I was a bit freaked out about packing for this race. Not only was it my first stage race, but my first time running in India, a place where the weather is famously unforgiving and unpredictable. Add to that the total and complete lack of running stores in the area, and I had to be sure my packing and gear was on point.

For running gear, I basically took two pairs of shorts and two or three shirts for five days of running.  Five pairs of socks and a homemade jacket rounded out the list.

The following is a list of gear I brought, what worked, what didn’t, and what I’ll do differently next time. Please note some of these links are affiliate links, so any purchases made through this site will drop a few Rupees into the URP bucket. Thanks to those readers who choose to support the site this way.

This sucker is huge, has minimal bells and whistles, and gave me plenty of confidence.  I packed my smaller bag (which is huge itself) in the Beast, along with my shoes, sleeping bag, food, and everything else I needed. Nice! There are no pockets, no extra compartments, just raw, secure, space.  It’s made of some type of un-rippable material, is essentially waterproof, and the zippers are huge. Nothing worse than blowing a zipper, and I didn’t have that fear.  The straps are made of seatbelt material and are meaty, though weren’t long enough for me wear on my back.  Bonus: Bright orange makes it easy to find in luggage claim.  And yes, it complied with size requirements for all airlines I’ve used (domestic, international, and inter-Indian.)

I’ve had this bag for over a year and have used it dozens of times.  It’s thick, doesn’t collapse when packing/unpacking (but can collapse when not in use) and can be carried, worn, or dragged behind a mule (I haven’t tried that, but would feel comfortable doing so.)

All I knew about the trail is that it was really, really tough on the feet (cobblestones for miles) and that my feet would likely swell a bit due to the altitude (12k’).  Cascadias were one of my first pair of “real” trail shoes ten years ago, but frankly I hadn’t worn them in years, instead wearing lighter, faster, and less “built” shoes.  I made the right choice bringing these.  They were tough enough to protect me feet, and gave me enough room to swell a bit.  I left them with our helper/sherpa team and miss them.

I knew that we’d have a few days of road running with a fair amount of descent, and wanted something again, tough enough for the elements, but with enough room for swelling.  I struggled with what to bring, and feel I made the right choice.  While a pair of even-cushier Hokas would have been nice, the tough build of these Topos made the decision easier.  Read my review for more info.  I gave these away on my last day as well and was then left to wander around New Delhi (a dangerously filthy city) in a pair of sandals for three days. D’oh! 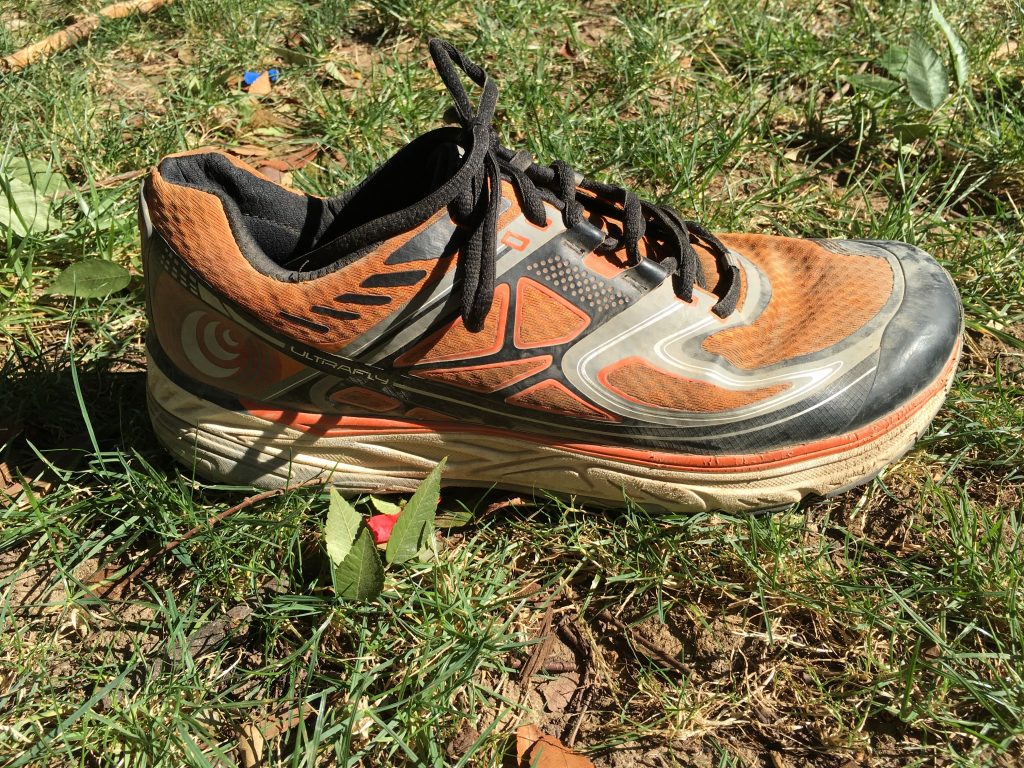 The Himalayan 100 is a stage race that doesn’t require the runner to carry anything.  A team of helpers, yaks, sherpas, and jeeps carry the essentials for the 40+ participants, which greatly minimizes the need for running with packs. I chose to go minimal.

I run with this thing on short runs, long adventures, and now multi-day treks in the Himalayas.  I’d pack my phone, some food, and some meds in the belt and off I’d go. Here’s my review from 18 months ago…I’ve got the same one and still love it.

At least one day I chose to bring my M4/3 camera and wore a fanny pack.  I’ve had the Clik Elte pack for years and it’s still great.  Here’s my review from 2012. It holds everything securely (I brought an extra lens) and doesn’t bounce at all. Perfect.

I was a bit skeptical of this because being 6’2, I usually go with a long bag, but this is what was available, so I took it and it worked out great.  At Sandakphu on the Indian/Nepalese border (12k’) it got cold at night and I needed protection–nothing Arctic, but temps in the 20s are cold when you’re in a trekkers hut with no insulation whatsoever.

What I liked about the bag:

They made me smile, they made the Indian and Nepalese border guards smile, and they made the villagers smile.  No, they’re not itchy. Yes, I wore spandex under them.  And hell no, I didn’t leave these for the staff.  Here’s my review from last year.

Yeah, they’re short, but who am I trying to impress? I wanted something light with a secure liner. These fit the bill perfectly. And whoa, check it out, they actually match my Icebreaker shirt!

I’ve had this shirt for years. Here’s my review on it from over four years ago (oops, looks like the pics have disappeared!), and it’s still doing great.  It’s great for cold, for warmth, it doesn’t stink, barely wrinkles, and it’s comfortable.  If you haven’t worn wool in the last decade, I’d urge you to check it out. Here’s a comparison I did on wool shirts from 2014.  Yeah, wool can be pricey, but it’s worth it.

I also wore one of my URP shirts by Patagonia.  It’s a tech shirt, but hey had to represent URP while overseas.

As I mentioned in this episode about the race, I’ll attribute most of my non-soreness to the fact we sat around each night and roller out our legs. Here’s my review.  I’ve got no financial affiliation with the company, but am pretty sure I sold about ten of them on the trip.

I used it to keep my ears warm when the temps dipped in the morning. I used it to keep my neck warm during the run, to clean myself off after aid stations, and most importantly, I used it as a mask in the horrendously bad air quality of central India and New Delhi.  One I got from the GingerRunner, the other I found on a trail.

Eyes are important, and I wanted a pair of glasses that I could wear during the morning, night, and through the jungle on day four.  They also needed to be lightweight and durable.  These Rudy Project glasses have prhotocromic lenses that darken when they should and stay light otherwise. Fantastic, bulletproof, crazy expensive, but worth it for me.  I’ve had this pair for 2+ years and haven’t destroyed them yet.

What I Should Have Brought

I considered bringing my favorite pair of LEKIs, then a week before the trip, I snapped the carbon fiber and chose against bringing a different pair I wasn’t comfortable with. Big mistake. I wish I’d brought a pair, as I ended up crafting some out of bamboo I found in the jungle.  Five days of running is a lot, especially when much of the terrain is extremely technical.

I brought a few gels and a couple of calorie-dense cookies, but should have prepared better. The aid stations were frequent, but minimal. Biscuits, bananas and water are good for one day, but for five days of tough running at altitude, I needed more. My fault.

We got lucky with weather and I ended up not needing most of the rain gear I brought (including my custom made/DIY shortsleeved rain jacket), so clothing wasn’t a big deal.  The shoes were spot-on, and the fact I could cram everything into one bag was a big bonus.  Next time I’ll bring a hunk pair of shoes to wear after I give my gear away and a pair of dang trekking poles.