You’ve heard me talk about my kids on the podcast and occasionally in my Daily News updates. Sunny is almost nine and Van turns six and a half today. I’m a proud dad and it’s important to me my kids have good role models like I did growing up. While my parents were always number one, I also remember meeting Rafer Johnson when I was young…Not sure why or where we were, but the fact I met an Olympian has stuck with me for decades.

I’m also hyper aware of what happens to kids when they’re pushed too hard…they resent the very activity their parents are trying so hard to share with their kids, and that’s disastrous and heartbreaking on both ends. At this point, Sunny likes to run and climb and play while Van prefers life at a more…leisurely pace.

It’s a difficult balance that’s especially tough when dad works in the industry and is essentially (well, officially) a professional fanboy. All I can do is show my kids the wonders of trail running, how much I enjoy it, how it’s helped me physically and emotionally, and importantly, that there are no barriers to them getting involved: Not their ages, not their genders, not cost, teams, weather, or the fact that they’re both on the skinnier side of the BMI chart. It’s also important that they see the relationship between participating and volunteering. Believe me, I’m aware of it and check myself every single day.

But this is where it gets awesome.

My family has traveled the 90 minutes with me to to Squaw Valley each year during the Broken Arrow Skyrace as I’ve been the race day starter and finish line announcer since it’s inception. This year I asked Sunny if she’d like to run the new 10k race and she jumped at the idea. Sunny ran her first “real” trail race a few months ago, and especially after meeting Anna Frost last year, has been a bit obsessed with some of the incredible women in our sport. More precisely, after I showed her the video of the 2017 BASR, she  chose the VK, but my wife asked me to help steer her towards the “safer” 10k and I was successful.

I asked the RDs if it’d be OK if Sunny ran, and was ready to hear “why doesn’t she wait a few years” which would have been a reasonable response for this race. Broken Arrow is held in the mountains above Squaw Valley and is notorious for inclement weather and sketchy footing.

Instead though, they said sure, she can run the 10k, but she’ll need to run with an adult. Awesome! After I told her she was able to officially register, she signed up on ultrasignup (we paid for the race) and put in some decent training in the months leading up to June. Training can be tough when there’s school, loom bracelets, friends, slumber parties, NERF wars, and a new swing out front.

While my wife was originally going to run with her, I asked if it’d be OK if we had someone else–neither she nor I–accompany our little blond in the mountains. While I’m always afraid of being too enthusiastic with her and pushing too much, I’m also fearful that my wife is too careful and protective and Sunny won’t be given the opportunity to fall down and get back up. We’d need someone else to run with her…and that’s where Ladia came in.

I’d interviewed Ladia Albertson Junkans last month (she’d won the competitive Chuckanut 50k and Way Too Cool 50k) and was moved by her personality, her energy, her passion, and her unabashed love for movement. I shot her an email the week before the race titled “A unique request for this weekend” and asked if there’d be any chance she could run as a guide with Sunny. Mind you, Ladia would be running a tough 52k on Saturday, and I was asking her to run another 10k on Sunday with some kid she’d never met. When she responded with a “Hell yes, I’d love to!” I was excited and felt relieved that the weekend was all coming together. Our community is incredible.

We met up with Ladia and her husband Adam and Sunny liked her immediately. My wife’s mind was also put at ease, especially considering the RDs were considering rerouting or cancelling the races due to thunder storms.  I stayed out of if while the ladies plotted their race strategy and talked about who-knows-what.  While I was busy announcing the 52k race Saturday, Sunny, Sam, and Van watched Ladia come screaming into 4th place behind Rory Bosio, and Sunny was amped and ready for her own race the next morning.

Before we get to the pictures, the sport has grown a lot over the past decade and while we’ve made some significant advances with inclusion and openness, I feel like we’re missing a huge opportunity. If we want to make this bubble to become a more permanent umbrella, we’ve got to focus on getting kids into the sport while they’re young. Not pushing them into fierce competition, and not putting them on unsustainable pedestals, but let’s get these kids on the trails!

Tell a young kid that they’re allowed to run in hills and through mud, and trust me, they’re happy kids. Soccer recruits them early. Gymnastics and baseball are popular starting at 3 years old. The media is busy trying to convince kids that e-sports is an actual thing. (News flash: It’s not.) Many swim during summer. Running though, is still often relegated to PE as a punishment in many places. Let’s change that perception by getting kids on the trails with us–especially girls–and ensuring that the next generations have every chance to enjoy this silly sport.

And kudos to brands who make running gear for kids! Both my kids have Altra road shoes and Sunny loves her Salomon Speedcross trail shoes. They both wear a size 2 (most running shoes start at a 4) , and even though they may not be available in most running stores, they’re available online and we’re thankful for that. These companies understand long term goals and brand affiliation and are more interested in this strategy versus a focus on immediate margins.

And this is where I’ll leave the story to pictures. Suffice to say, Sunny had an incredible time, loved the race, wants to run it again, is busy making more bracelets for Ladia, and most importantly, has another leader to look up to with goals in mind for next year.

This is a wonderful community and it’s up to us to keep it going. 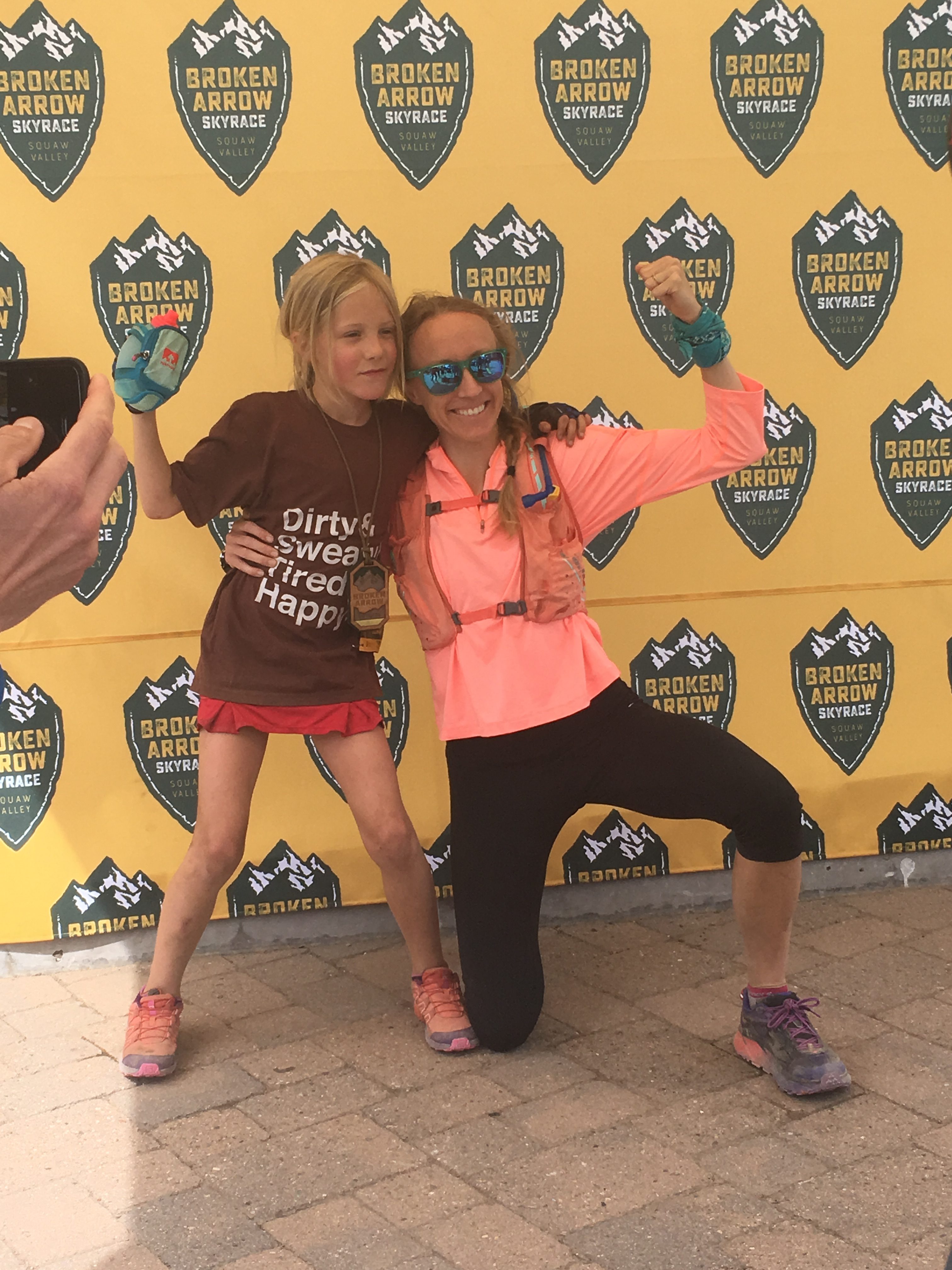 Thanks again to Broken Arrow for encouraging participation with the new shorter distances and the kids race and for making every runner feel important. And huge thanks to Ladia Albertson-Junkans for taking the time to hang out and run with a little girl with huge dreams.

36 Responses to "Girls on the Run"