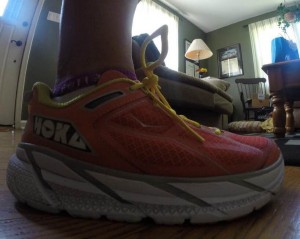 I have never tried Hokas before but when I hear the word, the first thought that comes to my mind is big, clunky shoes–definitely not light weight.

It came as a surprise to hear that Hoka One One was making a super light road shoe, the Clifton, and I was thinking that maybe it would be lighter than other Hokas but that it couldn’t be too light unless they didn’t have as much cushioning as other Hoka models.

I am an ultrarunner, but I love racing marathons and am currently in the middle of trying to qualify for Boston. Shoe-wise, I am obsessed with extremely light, minimalist shoes for my road running, and I thought for sure that either the Cliftons were going to feel too big and bulky or they would just be the same as my minimalist shoes, light but not much cushion. 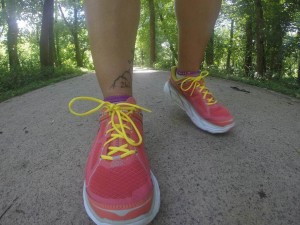 I opened the box and wow look at that midsole! It was big!   Then I picked up one of the shoes and it was incredibly light (6.9 oz for women’s!). I don’t tend to care too much about color however I thought the coral with the yellow laces was very appealing, not too crazy but not boring either.

The Cliftons seem to have an average fit. I generally wear 8-8.5 with the occasional 9. I was 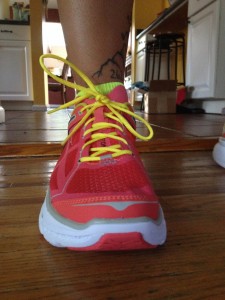 given the 8.5 and they fit perfectly. They felt very comfortable and cushy on the inside from the first time I put them on. I have heard that some runners feel Hokas are too narrow. While I do agree that the Clifton does not have as much room in the toe box as some other shoes, it was not something that caused me any problems or discomfort. I also did not see or feel any seams on the inside that would cause any pain. The upper is made from a thin mesh that is light and airy adding to the shoe’s comfort.

I ran a solid 100 miles in the Cliftons before writing this review. My runs ranged from 5 miles to 15 miles. My workouts consisted of easy runs to 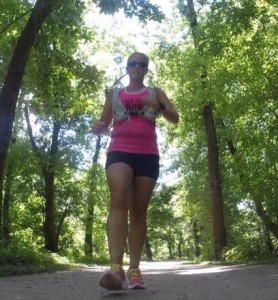 assertive effort strides to hill repeats to half marathon pace fartleks. I thoroughly enjoyed the Cliftons on all my runs. The first thing I felt when I started running was the bouncy feeling I had when landing. Hoka attributes this to the CMEVA midsole they used for shock absorption. Despite the large midsole with the significant amount of cushion, I found my stride unchanged. I was able to maintain my natural stride without issue.   This is likely due to the early stage meta-rocker and the 5mm foot drop which Hoka says encourages runners to have a natural form and mid foot strike. In plain terms, it made for an incredibly smooth ride for me. I was easily able to run whatever speed the workout called for and they were just as comfortable on hills. While using the Cliftons the past few weeks I actually have noticed less of the random aches and pains that comes from many miles on the road.

Overall I am very happy with the Hoka One One Clifton. It is a super cushioned, super light shoe. Not only are they great for lessening the impact of ultra training on the roads but they are light and fast for racing. After trying the Cliftons, my minimalist shoes are a thing of the past. I felt just as fast in the Cliftons and will not give racing in them a second thought. I also

feel the price is pretty reasonable considering most Hokas are more expensive than the $130 price tag for the Cliftons, not to mention my super light minimalist shoes, while cheaper, definitely don’t hold up too long (250-300 miles max). I imagine that the Cliftons being more sturdy with more cushion will last longer. The only negatives I found were that some runners who prefer tons of toe box space may not like the Cliftons as they are a bit narrower than some other shoes. And I did have color leakage on my socks which seems to have subsided after the first week of use. 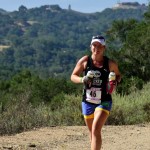 This review was written by Amy Dedic, 33, who’s married to a fellow runner and has 2 young children.  She lives in Flourtown, PA and runs on average 50-60 miles/week mainly on roads with a little bit of trail mixed in.  You can read more about Amy’s running on her blog.  She was provided these shoes by URP with no expectation of a positive review. All words are her own.