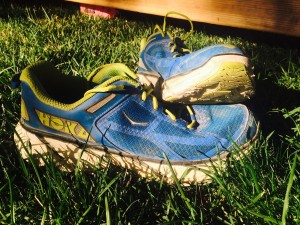 Apparently it takes…ahem…big feet…to criticize Hoka One Ones.

Because of a sizing disparity, I’m still not sure I fit that bill, but I will give my honest opinion on the new road shoe that’s got people talking…the Hoka Clifton.

[update: I spoke with the folks at HOKA and found out that the shoes I used for this review were prototypes and many of the concerns listed in this review have since been remedied–sizing in particular–in the versions available at market.]

I received these shoes from Hoka almost two months ago, and since then, have put a few hundred miles on them. Ninety percent of those miles have been on the road or decomposed granite, the remainder have been on groomed single track along the American River in Sacramento. 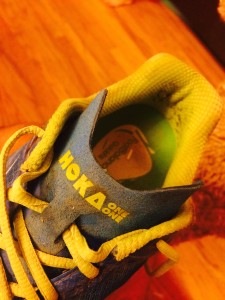 As my first pair of Hokas, I was immediately shocked at how light these shoes are.  I wear a 12, and even at that size, they come in at less than 9oz.  They’re described as featherweight, and that’s a pretty apt description.

One of the first things I did is push my finger into the abnormally thick sole to experience the softness I’d soon be running on.  Compared to the Adidas Boost, the Hokas didn’t impress me, but a finger is not a good gauge of fit and feel, so I held my thoughts until I clicking off real miles.

One thing I did like immediately (and continue to like) is the thin and fitted neoprene-like tongue.  Though it isn’t gusseted, the laces wrap through it and it doesn’t budge or drift at all. 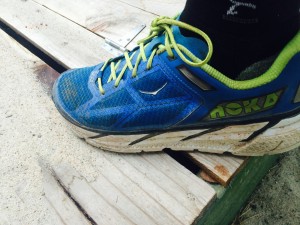 I also appreciated the design of the shoe. Not too flashy and not ugly.  These are road shoes, so dirt won’t hide any ugly and ostentatious designs.  These look snazzy. 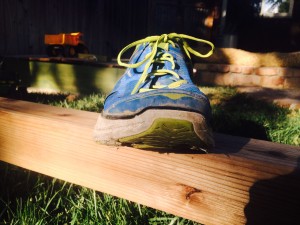 The heel collar (the section of the shoe that wraps around the heel) has soft structure and decent padding to it, but the remainder of the shoe is awfully light in form and build. Very breathable material connects to the exoskeleton that makes up the lace box, but other than that, it’s a fairly minimal upper. 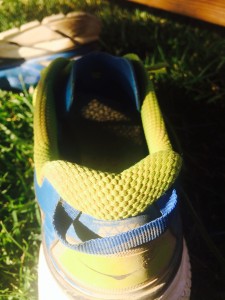 As mentioned, the tongue is nice and thin and doesn’t slip around.  The laces are also quality and have yet to come untied even once. Those little things matter to me.

The outsole of the shoe is squishier than the side, and the light tread gives just enough help on the trails, without giving any room for rocks to get lodged and bother me.
As with many Hokas, the heel has a “rocker” build to it that allows an easy and smooth heel strike. I like that feature. 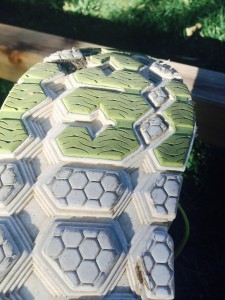 I wear a size 12 inmost shoes.  Adidas runs a bit tight, but for most other brands (and believe me, I’ve tried most of them!), I wear a straight 12.  My foot’s not abnormally narrow, but if a narrow is available, I’d give it a try.

My foot floated in these shoes like I was trying on the size 16 basketball shoes on the clearance rack at Ross. Not necessarily in the length metric, but volume-wise, no matter how tight I made the laces, there was just too much shoe there. I’m extremely adaptable with shoes, but these were so big, I was unable to give them an honest review.  And yes, I checked the sizing on the shoes and the box numerous times, sure that I’d been sent the wrong pair. 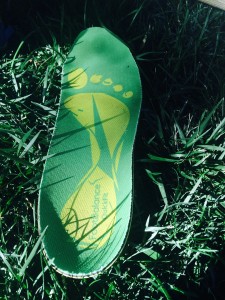 Luckily, I’d just been sent a pair of inserts to try out from FootBalance, and despite never having tried inserts in my 30 year running career, I trimmed them down and slipped them in, thinking, at worst, I’ll just take them out if they feel weird.  Turns out, they were just what the Cliftons needed to give me a proper fit.

Side note: I actually really like the inserts. They didn’t mess with arch and are light weight at about 3oz, providing a tiny bit of structure and cushioning. I’ll likely wear them again. 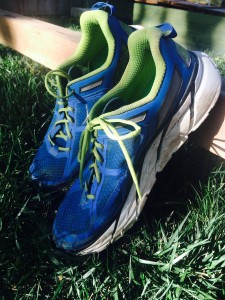 The hype around Hokas is legendary. Runners really love their shoes and claims have been made about injury prevention, softness, reduction of fatigue, etc.  “Just run in them and you’ll see! They’re awesome!”

Unfortunately, much like a movie that’s won every award and that “you have to see…it’s the best movie EVER!”, expectations were awfully high and unfortunately, the actual experience left me less than satisfied.  I’d never in my life describe them as “hard”, but they don’t feel any softer than many other shoes I wear–namely, the Adidas Energy Boost.

I could feel a slight difference in size of the “footprint” 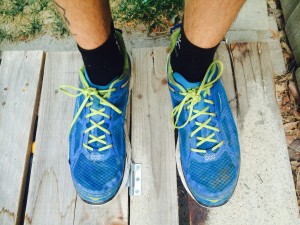 that strikes the ground, but that’s not something that leads me to like or dislike a shoe.

For a thorough review, I ran in the Cliftons for a three hour slow run on decomposed granite in San Francisco, I did some stair and parking garage repeats, and completed plenty of tempo runs.  For their almost-comical size, the shoes perform much better than I’d expect, but I never did get the Hoka High that many seem to experience. 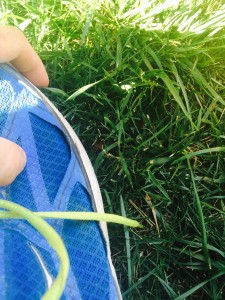 The rubberized area that attaches the upper to the last came loose a few weeks into testing.  It appears to be cosmetic and hasn’t worsened, but a $130 shoe shouldn’t come apart with less than 200 miles on it.

Well, overall I like the shoe with the inserts.  They’re nice to run in, and I’ll put them second in my current arsenal for shoes behind my Adidas, but that’s with the adaptations (inserts) I’ve made to them.  Unfortunately, I was left underwhelmed by the hype and expectations, and still feel that the sizing issue and quality are areas that should be addressed by the company.

These shoes were provided to me by Hoka as samples. All words are my own.

9 Responses to "Hoka One One Clifton review"