Summary: A relatively lightweight road/light trail shoe great for the runner who likes extra cushioning and a bit of extra room.  Similar to Hoka Clifton, but the Huaka has some major differences–some I liked, some I didn’t. 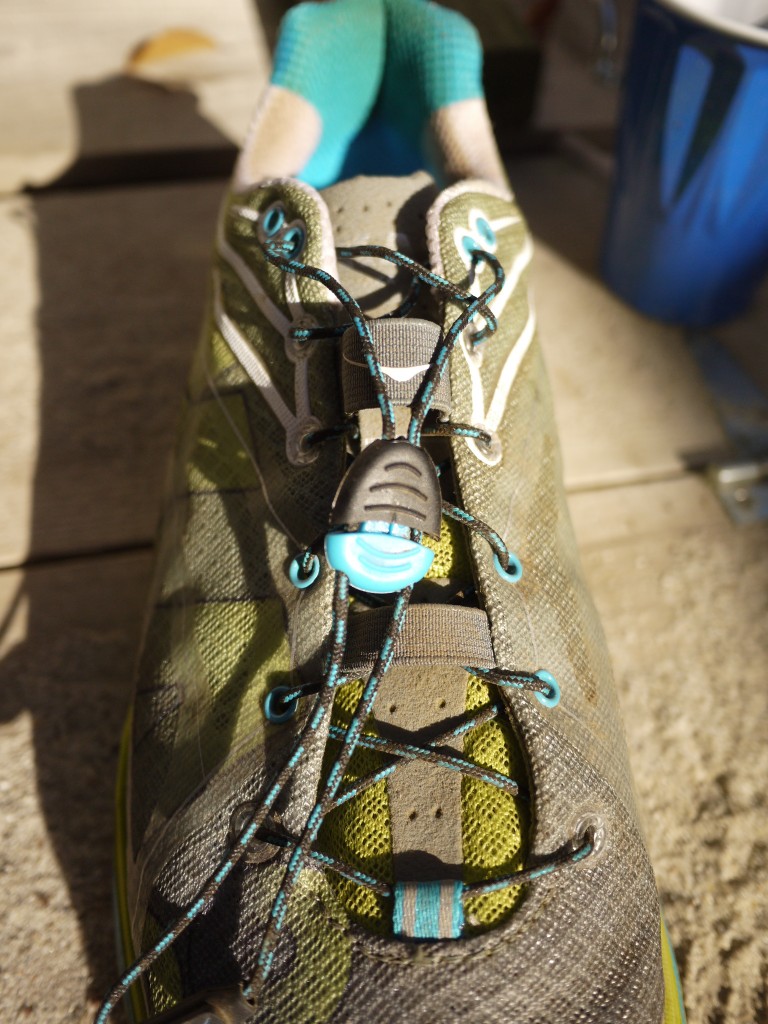 The Huaka has an average ankle collar that leads up to the typical (and much loved!) thin tongue. My pair came equipped with quick laces, but I don’t find the technology terribly easy to use. I prefer BOA’s ability to twist to tighten , but I also don’t fear breaking Hoka’s version.  The shoes have loops to tuck the excess lace into and it works pretty well.

The upper is composed of a breathable meshy material that I haven’t had any problem with, in terms of tearing or excess wear, and I’ve put 120 miles or so on them. The rear of the shoe has a nylon strap for pulling on the shoe that actually fits mens fingers! So many shoes have a little strap that’s too small to get even my skinny digits in. Hoka put some thought into it and did it right.

The Huaka has a more significant rocker on the heel than the Clifton, but it never felt that different (and I’m a heel striker.)

Up to this point, the Clifton and Huaka feel about the same to me, so let’s look at some differences. When looking at the sole and last, we can get into talks about EVA, rubber, and Hoka’s patented materials, but let’s just say the Huaka feels a lot softer than the Clifton. Much more cushy at the roll off, and where the Clifton feels like a normal shoe, it’s brand brother really gives me the feeling of a wide-footprinted stable trainer.

One major issue I had while testing is getting rocks stuck in the sole.  If it were pebbles, I wouldn’t mind, but because the two holes are so big, a dice-sized rock stuck in my shoe was a pain in the butt. Only happened a few times, but it was enough that it bothered me.

The Huaka feels similar to the Clifton in many ways.  Both shoes are pretty light, the drops feel about the same, and both have a pretty cushy landing.

The main difference is the Huaka is a bit more voluminous and doesn’t feel quite as fast as it’s partner.  My tempo runs are in the 6:30 min/mile range, and I’ve got no problem running that with the Clifton, but the Huaka feels a bit sluggish–likely due to what feels like more cushioning and larger footprint.  While the coosh is great for long slow ultras, it’s an impediment for high turnover.

I’ve had a tough time getting my head around the Huaka.  It’s similar enough to the Clifton that I like it, but the differences make me choose other shoes over the Huaka–though I know many slower and/or bigger runners like those changes.

For someone who’s looking for a stable and super soft trainer who’s doing most miles on pavement or decomposed granite, this is a great shoe. For someone like me with a normal/narrow foot who likes an all purpose shoe that would be great for speed work or a 50 miler, the Clifton is my favorite shoe right now.

10 Responses to "Hoka One One Huaka Review"