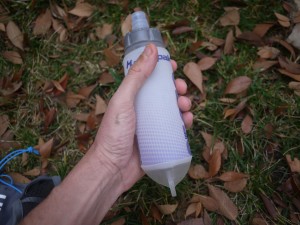 uncomfortable for some runners.  I’ve toyed with different bottles (small bottles from waist packs,  or my contoured Simple bottle), but I’m pretty sure I’ve found a better answer: The Softflask from Hydrapak.

Looks like one of the older Hydrapaks I got at a race a few years ago.  This one’s bigger, and it doesn’t strike me as something designed by or marketed to the Mountain-Ultra-Trail (MUT) crowd. There’s a cap on the nipple, and some sort of loop used to carry it.

350mL, which is 11.8 ounces of liquid in an RF welded polyurethane. Not sure what that means, but if you’ve never held a Hydrapak bladder, they’re soft, but not rubber soft. More like 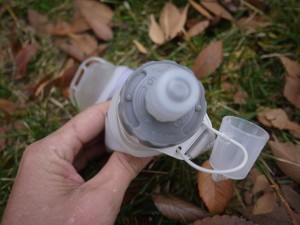 a soft plastic with a tiny bit of rigidity. The neck and the bottom portion are both harder (though still malleable) plastic.

It’s got a bite valve that holds air and water surprisingly well, as well as a dial on top that adjusts the flow of liquid.

On the “bottom” of the bottle is a harder plastic “hook” that didn’t make sense at first, but I later discovered is perfect for airing it out after a good wash.

Small strap and a lid for the nipple. Both removable. 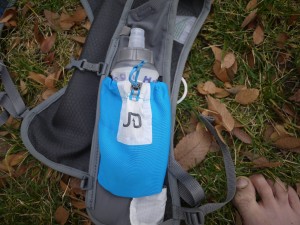 I love the fact that I get only liquid when I drink. No air, no gas. Huge bonus for those who get funky butt when they run.

It collapsed into the size of a smashed can. Awesome and easy to stash. Who wants to carry around an empty bottle on their chest or in their hand?

The mouth of the bottle is wide enough to handle any size ice cube. 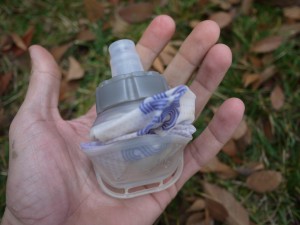 I’m able to squeeze a gel into the flask and drink it throughout a run.

Get rid of the strap and the lid. Neither make any sense if used for running.

Get rid of the adjustable flow dial. It’s hard to grip, very tough to see (especially in low light conditions), and doesn’t really make sense. Maybe have a “lock” feature on it, but find a different method of incorporating that into the flask.

I wish there were a way to invert the bottle for drying purposes. Make the opening even wider maybe? Yeah, it dries OK as it is, but if I could flip it inside out, I’d be sure there’s not any mold growing inside. 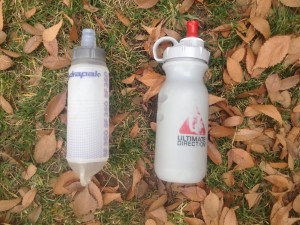 I see myself transitioning over to soft flasks for many uses.  They’re great to carry in vests, in backpacks, and my running stroller, but I can’t yet see myself carrying one in my hand. Once it’s half full, it feels limp and floppy.

Prediction? We see a LOT more of these in the next year in different sizes, shapes, and platforms from many different manufacturers.

Note: I spoke with Ultimate Direction Brand Manager Buzz Burrell and the company is partnering with HydraPak to offer soft bottles for many of their existing vests.  Salomon already offers one, though I have not tried the product.  Have you?