Before I say one word about Master Amino Acid Pattern (MAP) , allow me to post a laundry list of disclaimers, excuses, and justifications for what you’re about to read.

So with that said, if you’re looking for an in-depth scientific review on MAP, please don’t look to me for advice (unless the wife is home)…I simply don’t have the answers.

Why am I Using MAP?

I knew at the start of Spring that I was going to have an intense few months, culminating with the Bryce Canyon 100 at the end of May and wanted to make sure I stayed healthy and injury-free through many races, training runs, and cross training workouts.

During this, I was reading Lucho’s blog one day and noticed him talking about the benefits of MAP and it caught my attention. He’s a no-BS runner who buys his running shoes at Goodwill, but he swore that MAP was not simply snake oil, but the real deal. What the hell, I got online, choked at the price, and bought some.

First and foremost, it’s a jar of 120 pills. White, kinda large, and not coated.  The 1000mg pills are labeled “Amino Acids Dietary Supplements” and are made by the International Nutrition Research Center (INRC). Bottle runs about $50 online.  MAP is also marketed under the brand name SON when sold/used in medicine and/or hospitals. 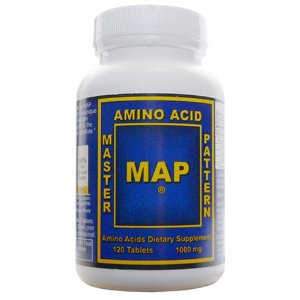 For a more complete understanding of what/how essential amino acids work, Ben Greenfield has a good primer on them here.

Where did it come from?

According to Dr. Grandi at the INRC, MAP was “discovered” about thirty years ago by a team of scientists who were looking for a treatment for malnourished babies. This particular strand of proteins (of which there are literally millions of variables) was discovered by accident and is still used to treat infants, patients with Krohn’s Disease, renal failure, and other medical issues.  It his Dr. Grandi’s contention that a person could receive 100% of his/her dietary protein by using MAP.

What Does It Do For Me?

Plainly, simply, and honestly, it shortens recovery time both during and post-workout by a significant amount.  I have more endurance, as my body doesn’t feel like it’s breaking down, and my recovery time is near extinct.  Last month I had a series of 4 races (50M, 50k, 10M, 50k) in three weeks and I never once felt sore.  I’m able to continue pushing on long runs and hills without feeing as if I’ve already put in hours of running before.  I can go on a hard 10 mile tempo run and feel absolutely fine ten minutes. I can run for five hours and feel like I just started.

Fatigue is no longer an issue for me, and that’s one hell of a claim as an endurance runner.

Outside of running, I’ve noticed a bit more energy, but nothing nearing the drastic change I’ve seen during my workouts.  For research, I took my resting heart rate before I started taking MAP  and it was 44BPM. After one month of taking it (to the day), it’s currently 48 BPM.  Again, correlation or causation…who knows?

According to listener Matthew, he doesn’t feel a surge of energy (like when taking an energy gel), but instead “feels that (his) body is firing on all cylinders.”  He also says that “it works better than anything else (I) have used–protein shakes, recovery powder, etc.”

Listener Wendy has been using MAP for “many months” and has not noticed any miraculous differences in performance, training, or recovery.

And listener Melissa offers that her results have been a mixed bag. Better perceived energy ad mood, but not as drastic a recovery solution as others have found.

Mike offered this: “I tok them during my three day run around Mt. Rainier on the Wonderland Trail. I took one or two every hour and fie at night and the next morning throughout the three days. I was amazed on the moring of day two because I was not sore…this was hard to believe!…this was unprecedented for me!”

Dawn states in the URP thread that “Many of the runners I coach and myself as well have been using MAP for at least six months and see HUGE benefits from using it. It is especially useful as a recovery or injury healing aide.”

Matthew finds that “the results were absolutely immediate. I would say from the very first time I took them. I could really go out and do some damage and wake up the next day feeling nearly ready do it all over again.”

How Does it Work?

One answer I’ve read is that MAP increases endurance strength because the formula increases the energy hormone, ATP (adenosine-triphosphate) released through the burning of hydrogen.

Another explanation is that the combination of amino acids are in such a way that they are more readily absorbed by the body and thus used more efficiently.

Much of these results are apparently a result of the Net Nitrogen Utilization (NNU) factor. That’s the amount of the protein that will allow synthesis of new cells in the body.  Essentially, what percent of each pill or protein will act as a building block?

Couldn’t a person get this protein from just eating right?  Theoretically, if you ate a few pounds of salmon each day, a few bushels of the right vegetables, the right portions of red meat and grains, etc., yes, your body would work at the optimal level. However, eating that much is not realistic, many athletes don’t want the added weight, and that diet wouldn’t work as fast as MAP appears to.

In the Endurance Planet podcast with Dr. David Minkoff, it was stated that mother’s breast milk has the highest NNU of any “food” available at around 50%, with all other foods falling less efficiently after that…some down into the low single digits.  MAP is understood to utilize 99% of the essential amino acids.  See the “Wierdness” section at the end of this review for important information on Dr. Minkoff.

Additionally, and according to Dr. Grandi with MAP, the molecules in MAP start working 23 minutes after digestion and are 6-12 times stronger than other proteins.  Stronger nutrition works faster while bypassing digestion time.

I know it does. From what I know of PEDs, their main selling point is that they allow the user to recover immediately, and hey! that’s what MAP does!

MAP does not appear on any list of banned substances, nor will it show your labs at an increased/illegal level. Hemoglobin level studies have shown that they reach an “optimal” level, nothing more or superhuman.

Aside from that, there is certainly a mental aspect to this. Again, I’ve never taken a supplement in my life and was quite weary of taking something, especially when it showed such results.  Was I cheating? I asked my wife again–who borders on being too ethical–and she rolled her eyes…of course it’s not a steroid she assured me. Still, this seemed unfair…like I have a secret weapon that others don’t have or aren’t aware of.  For someone who’s been outspoken against Lance Armstrong for the better part of five years, this was a hurdle I’ve had to deal with, but am finally comfortable discussing and defending.

How Much To Take

The bottle states: Suggested Use- As a dietary supplement, take five tables daily; as an exercise aid take 5-10 tablets 30 minutes prior to physical activity or as directed by a health professional.

However, when I spoke with Dr. Grandi, he recommended taking twenty (20) per day and a minimum of thirty per day during hard training and/or competition. Holy cow!

I’ve had success with MAP taking about 4-5 day regularly. On race days or long runs, I take 5-10 prior to the start, then one per hour after that and it’s worked well.  I haven’t taken any post run yet, as I’ve had great results with my current regimen.

When I mentioned a 100 miler to Dr. Grandi, he advised that between 30-50 pills would be sufficient.  I don’t have 30 pills left in my current bottle to lay out for a visual representation, but holy cow, that’s a lot of pills! Too many, in my opinion.

Other listeners have been taking 10 per day, 2 per day, some split between pre and post run, and some, like Lucho, even chewing the damn things up mid run to make them hit faster.

Regardless, 20 pills per day seems crazy.

Aside from that, I’ve had zero side effects from MAP and they haven’t affected my stomach in the slightest. In full disclosure, I’m reasonably sure I could eat a rotting sea lion mid-run and feel no ill effects from it.

This stuff works. If you’re looking for an extra boost in your performance and especially in your training/recovery (which, duh, leads to greater performance), I’d highly recommend trying MAP. It started working for me within a week and it doesn’t appear to need to be taken every single day to become effective.  I’m hyper-skeptical and calling me a cheapskate would likely be kind.

The company is weird, I admittedly don’t fully understand what I’m taking, it’s quite expensive, but results are results, and this stuff works.