Gone are the days of wearing a chaffing strap around your chest to track your heart rate.  Those multi-hour runs wearing a tight and uncomfortable chest strap are history now that devices like the Mio Fuse can track heart rate through the wrist. 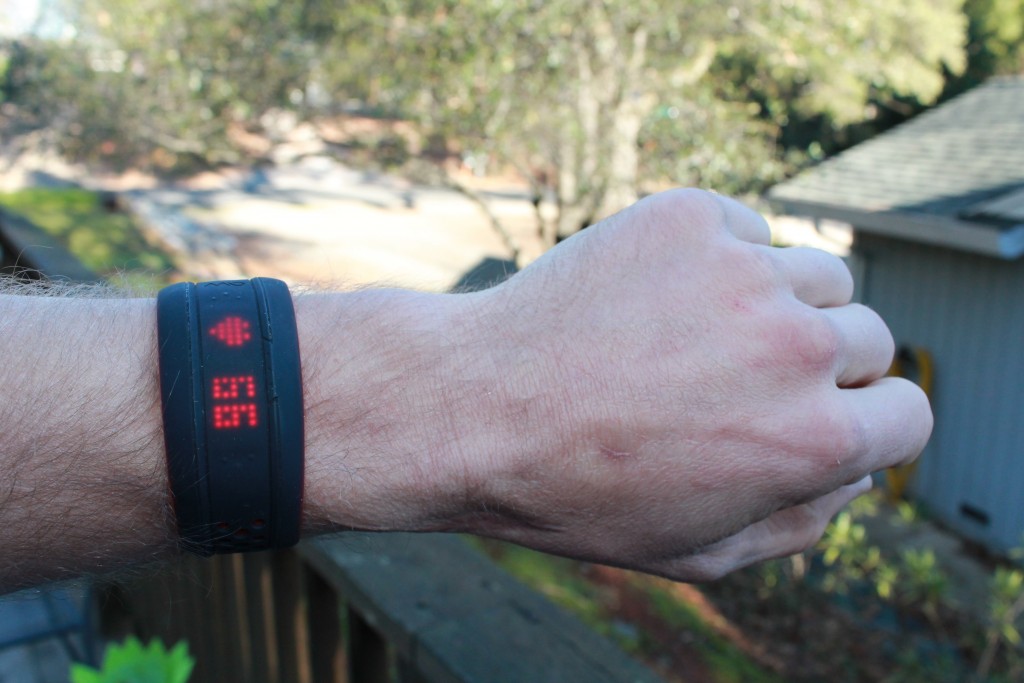 Mio has come into the fitness world with a line of 5 different wrist mounted, EKG accurate heart rate monitors. The company  says it uses an electo-optical sensor that measure blood volume beneath the skin.  However it works, I was excited to give it a try and throw away my old chest strap. 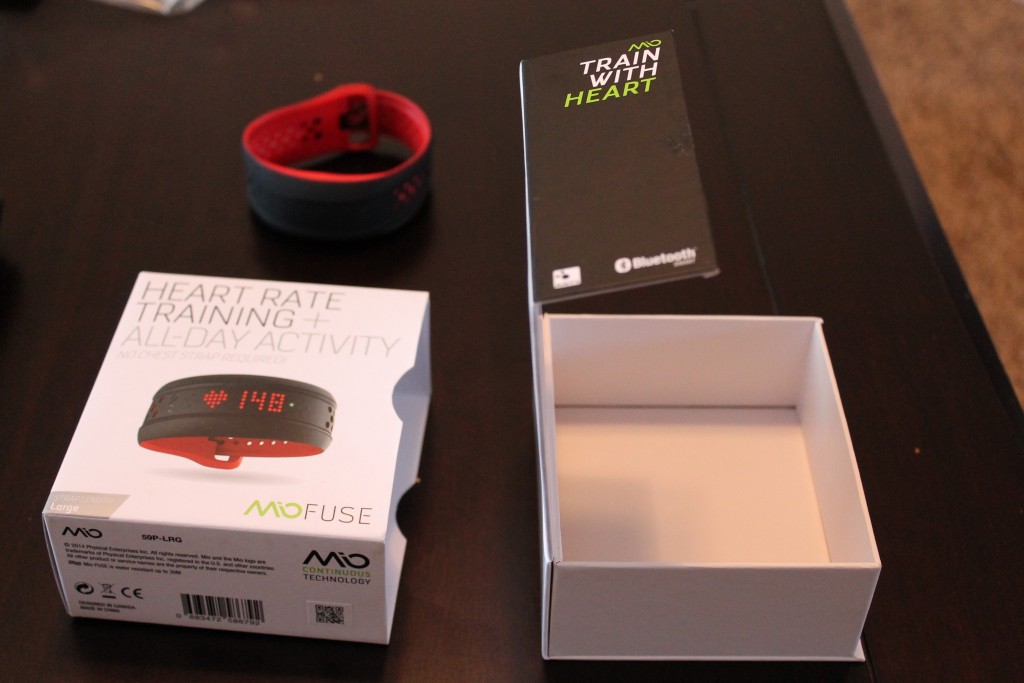 Getting the box open felt like opening up a new smartphone. It is neatly packaged with a magnetic flap. I felt like I was getting something worth the $150 price tag.  I pulled out the Mio Fuse, put it on, and realized I needed to read the instructions–I couldn’t figure out how to turn it on.  I pulled out the instructions/operating manual and found just one piece of paper–a quick guide on where to wear it on your wrist.  Even for someone pretty tech savvy, don’t expect to just get it and use without some initial set up and reading. 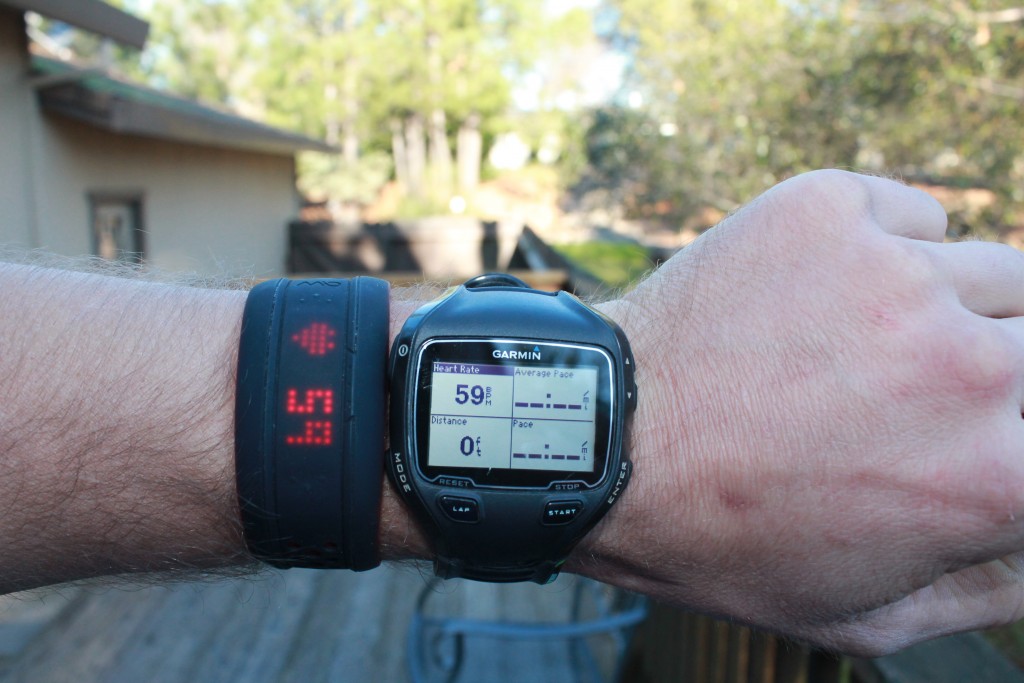 My favorite thing about this heart rate monitor is how comfortable it is.  The Mio Fuse heart rate monitor has a soft, rubbery, silicon feel to it.  I love the way to attaches and it never once came undone. You are supposed to wear it snug so it gets a good reading. Also wearing it a little on the loose side causes it to slide down to your wrist where you would normally wear a watch. Once it slides down and fits loosely the monitor no longer gives an accurate reading.  It did take a few times wearing it snug and a couple inches up your wrist to get used to that feeling.  It is comfortable enough that I forgot to take it off after workouts until hours later.  I do however worry about the durability of the soft, rubbery material tearing if it gets snagged on something.  I have taken a hard tumble down some technical trail before and will likely happen again.

I had some struggles initially.  I downloaded the manual and did some reading which still left me with lots of question that needed to be answered.  Much of the answers I had to get from other friends on how to get it to work with my GPS watch and smartphone.  I downloaded the brands app MioGo for my smartphone as instructed by the manual.   Connected my Mio Fuse to my smartphone via its Bluetooth connection. Set up all the required fields like height, weight, age etc for accurate calorie burn calculations.  Set up my heart rate zones for vibration alerts.  You can then choose what things you want it to display, like heart rate, calories burned, steps taken, time, workout time, pace, and distance.  I was now able to see my heart rate on the app.  Unfortunately that is all the app is good for.  If you do not have a smartphone you will not be able to configure any of this and will not get “accurate” calorie count or accurate heart rate zones tailored to you.  I never found myself going back to the app again as it doesn’t provide any info I need. 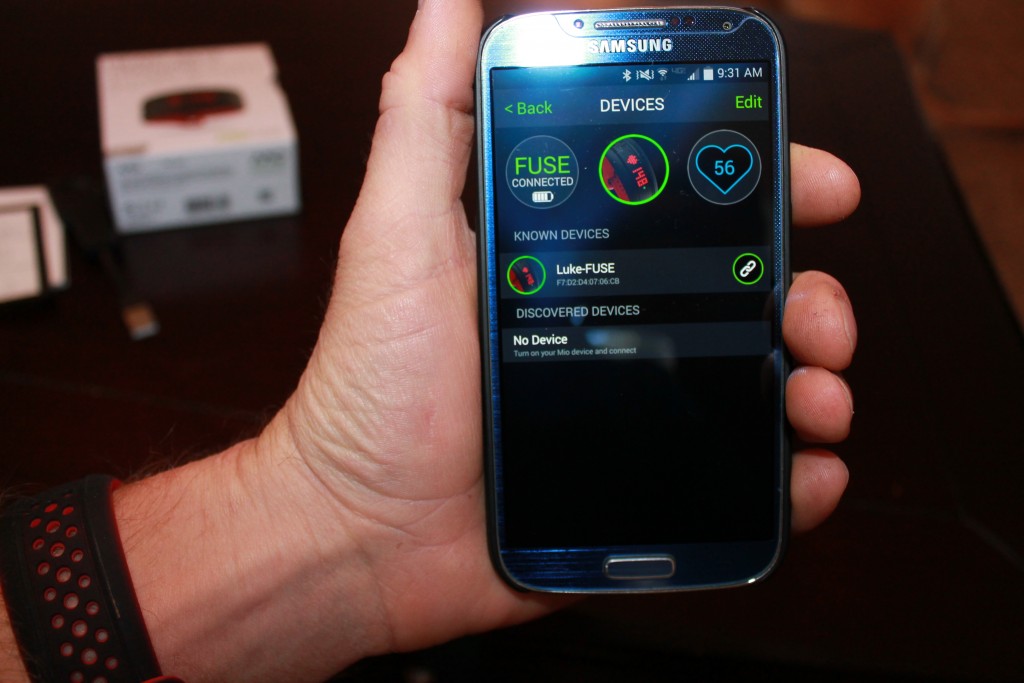 Then I had to figure out where to find the settings for my Strava app to allow it to connect with Bluetooth HRM’s.  Strava is the only app I used for recording my runs and bike rides to view my heart rate data.   I now had to set up my Garmin 305 GPS watch to accept a new HRM (heart rate monitor) through its ANT connectivity and do the same for my newer Garmin 910xt.

Once you get everything configured and ready, the Mio Fuse is very quick and easy to use on a day to day basis.

The unit has three buttons on it that have a brail-like feel to them.  To turn it on you hold down the center button for a couple of seconds and it vibrates, then says “Find” on the display. Ten to 20 seconds later it will vibrate again and display your heart rate.  Pressing the center button after it finds your heart rate will start the workout timer and display “Go”.  Pressing one more time pauses it.  Pressing and holding the button down will end your workout, turns off the heart rate sensor and gives you your totals for that workout. The other brail like buttons are to scroll through your display options.  The Mio Fuse connects with your programmed GPS watch or smartphone instantly when everything is turned on and there is no waiting around.

The Mio Fuse is capable of many different things it can track during a workout.  Unlike its cheaper version the Mio Link, which needs a smartphone or GPS watch to view and monitor your heart rate with–but more on that later.  The Mio Fuse has an LED display on the top to view your current and total data and I had no problem seeing the data in direct sunlight.  You can track workout time, time of day, steps taken, mileage traveled, pace, and calories burned.  You can choose what things you want it to display from one thing to all of the options.  Typically I just chose heart rate, steps taken, mileage and calories burned.  The battery life is supposed to last 6 to 7 hours when it is tracking heart rate, and most of a day when wearing to work or around to check your steps taken in a day.  I never wore it all day because of my work that I do, it would be in my way. 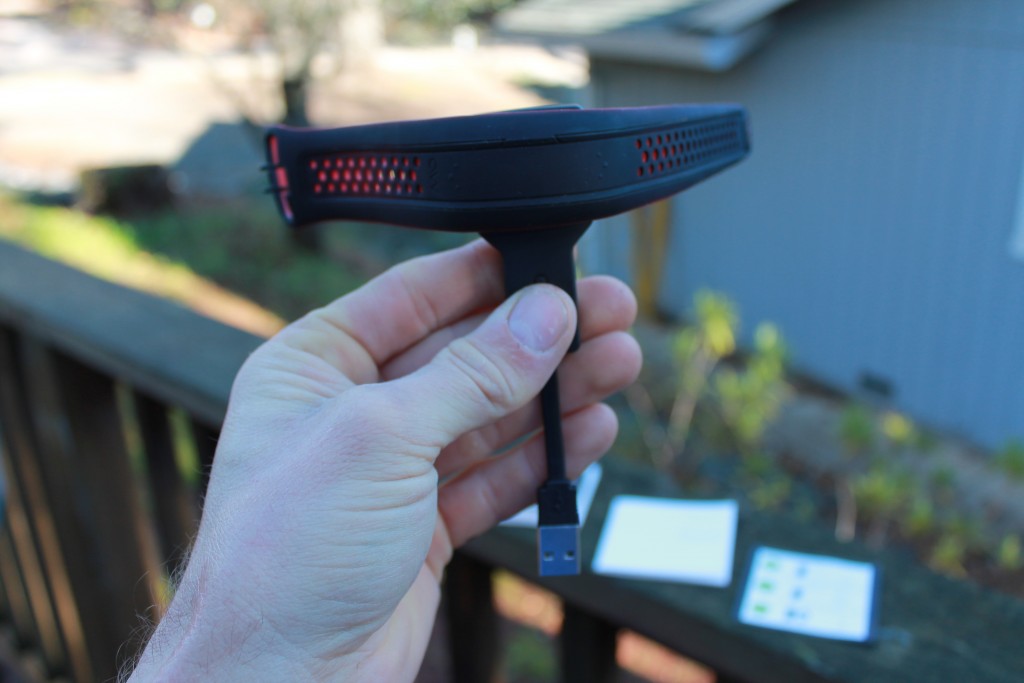 Again the Mio Fuse uses a sensor that measures blood flow under your skin to calculate your heart rate.  I wore the unit every day during all sorts of workouts and in various conditions and terrains.  I put it to the test running, cycling, rowing, crossfit, and walking.

It has been in rain, high wind speed on a bike, underwater during a very cold river crossing, and never lost signal or gave any odd data.

While running I wore it directly above my GPS watch and monitored the data on my Garmin.  While cycling I wore it in the same spot on my arm, connected with my smartphone via Bluetooth in my back jersey pocket.  After each of the runs or rides I was able nerd out on the data on Strava.  It is fun to justify your effort with concrete heart rate data.  I have found the accuracy to be every bit as accurate as my old Garmin chest strap HRM.
There were a few times however that I have questioned the complete accuracy of the data it recorded.  In the past when I would go on a run with my old chest strap the data would show over 200 beats per minute(BPM) until I would warm up after 10 minutes.  With the Mio Fuse, if it was very cold outside and the unit was cold when I put it on, it would show very low BPM until I would warm up for 10 minutes.  This only happened once. I now put the unit on while I am getting ready to get it warmer.  Another instance of inaccuracy is when I was cycling without my GPS watch on but had it connected to my smartphone. I found the Mio Fuse would vibrate itself down my wrist on a high speed bumpy downhill, this caused my BPM to go to 165 when it whould have been around 110.  The last questionable time is during high intensity running intervals. I was doing fast 400 meter intervals with fast 200 meter recovery for 3 miles.  My heart rate showed I got up to 196 during my last 2 intervals.  Now I was most certainly in the pain cave during this, I am unsure if my max heart rate can get this high (possible, but not sure of it).

Good information and bad information.  The accuracy of the steps taken on short runs is very close. About 98 to 99 percent close.  I have a habit of commonly check my steps per minute when running by simply counting every time my right foot touches the ground.  I do this in part of a body check of my running form. I know running on road it is very consistent  at about 180 steps per minute.  On a 10 mile run done in 67 minutes the Mio Fuse calculated 11892. I calculated 180 Steps per minute for 67 minutes at 12060 steps. This is a very close comparison. The bad information is that it will max out at 19999 steps (roughly an hour and 51 minutes of running).  This honestly fine with me since I do not really care about steps taken while running.

I am not an expert in this area and have no idea how accurate any of the generic calculations of any website or apps are.  After a 10 mile run the Mio Fuse calculated 1374 calories burned. My Garmin GPS and Strava showed 1410.  Which one is accurate? Maybe none of the above.

Accuracy with Pace and Mileage Total 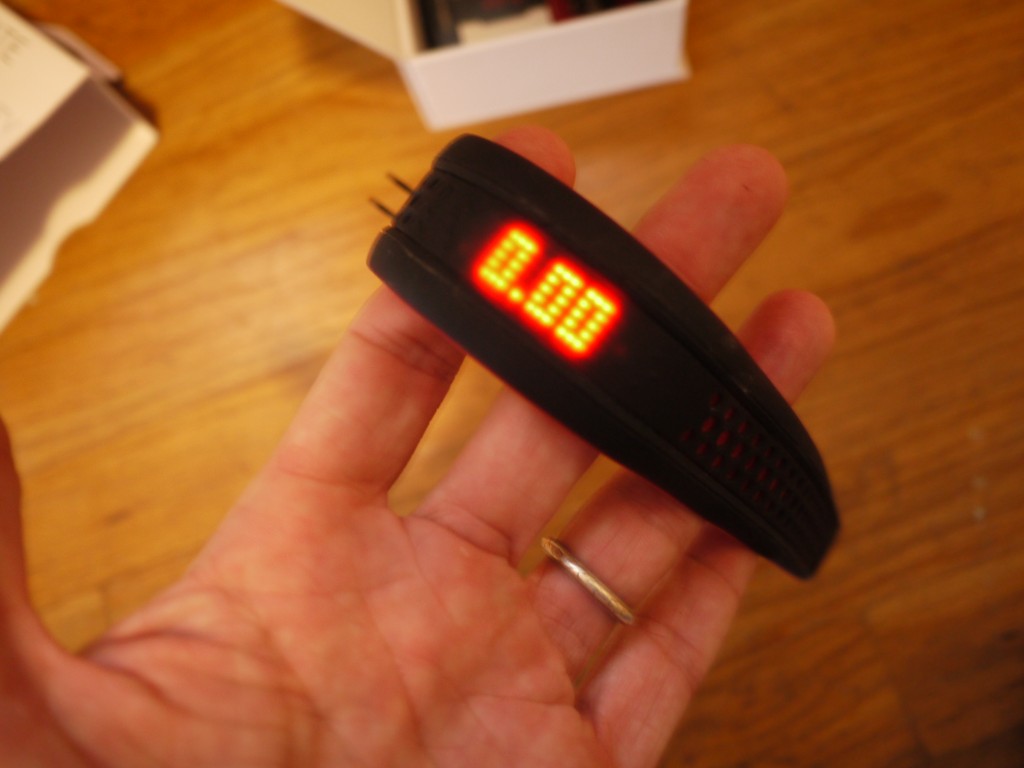 I did not find these metrics to be very accurate.  Not sure where this is calculated. My guess is it is a calculation by steps taken during the timed workout along with maybe your heart rate.  After a 10 mile run the Mio Fuse showed 7.75 miles. After an 18 mile run it showed 12.2 miles.  The pace shows off at about the same rate.  Not even worth viewing.

The best HRM I have seen and used yet.  However, if given the option, I would purchase the Mio Link for $50 cheaper, as I have no need for another device to view the heart rate. In fact my Garmin GPS watch when connected to the Mio Fuse was much easier to view my current and average heart rate while on runs anyway.  If you plan on using it during Spin classes, crossfit, rowing, or any activity where you won’t have a GPS device on, it’s worth the extra cash. If not, go with the Link. 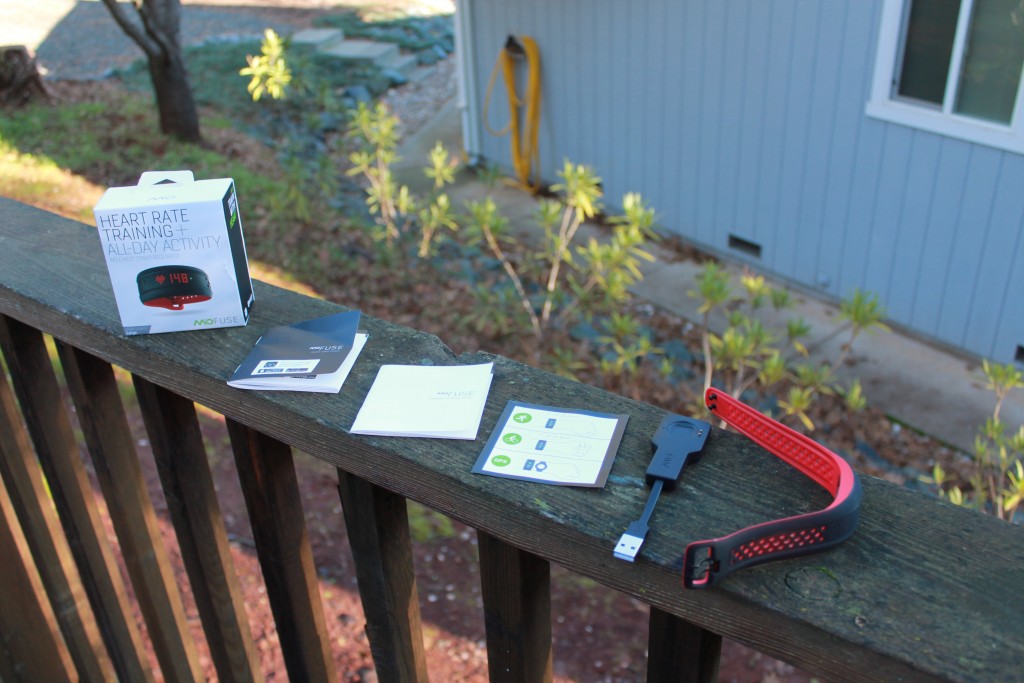 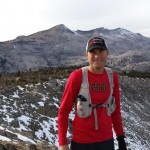 This review was written by Luke Garten from Grass Valley, CA. He runs on the Inside Trail Racing Team and usually runs 70 to 80 miles a week in preparation for the Jed Smith 50 miler in February, Gorge Waterfalls 100k in March, and the Canyons 100k in May.  Luke is also a father, husband, occasional cyclist, and a professional Equipment Mechanic.

The product was provided to URP for testing purposes without any expectation of a positive review. All words, thoughts, an images are from Luke/URP.