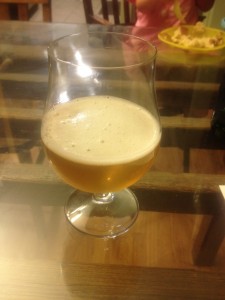 Hard to concentrate on how it looks with massive amount of fruit wafting from the bottle.

Strong cherry, apple, and all sorts of other fruit is released from the bottle immediately after popping the cork. Wow!

Tastes like sweet apple juice on the tongue, immediately turns very dry, tart, and fruity, and finishes quite bitter. Crisp.  Wow, what a bizarre beer.  Very reminiscent of sparkling cider, but much drier. Robitussin cough syrup is prevalent in the flavor profile.  This beer holds the tartness of the cherry, without tasting like cherry.  There’s some yeast and wheat, but everything is overpowered by the tart and dry fruit.

Each subsequent drink follows the same pattern. Sweet, then tart, then bitter.

Definitely more carbonated than it appears, with a tingly and somewhat oily mouthfeel.  I’ve never had anything like this before.

Breakfast beer? Not sure why it’s called that, if other fruity lambics or sours aren’t considered such. I could see myself drinking this at a late brunch, but 6am was a bit early.

Would I buy this again? Not sure. Maybe for a special meal, but I’d likely consider checking out Moa’s other offerings.

though. I think those Kiwis may be on to something!

One Response to "Moa Breakfast Beer"