One GU weighs just over one ounce.

The new Ghost Whisperer jacket from Mountain Hardwear weighs just over 2oz (2.09, to be exact.)

In that 2oz, the jacket provides an impressive  amount of wind protection, decent water resistance, and the ability to literally fit into a small pocket on a waist belt.

You gotta check this thing out.

According to the company, there’s only one factory in the world that’s able to manufacture the 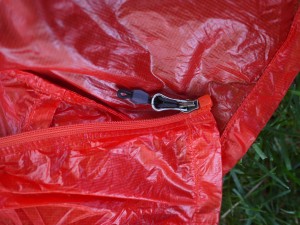 fine weave that makes up this shell.  It’s a very, very thin Nylon that most closely resembles a red plastic bag, or as my lovely wife said “you look like you’re wearing a red condom.”  I like to think of it more like a light sail, but whatever.

The jacket-technically a shell— is made from an extremely finely woven (and non-stretchy) nylon that was designed in partnership with Ueli Steck. There’s only one pocket, and that’s in

the back used for stuffing the jacket.  There’s a zipper and there are a ton of tags that tell you it’s flammable, how to wash it, where it’s made, etc.  Cut those off carefully and save yourself another 1/2 oz.

The Ghost Whisperer comes in a few different colors with two different zip configurations: Full zip or half zip.

This jacket works very, very well for a “starter” jacket that you want to take off a few miles into a run. It easily fits into any pocket and does the job perfectly.

Likewise, this also works well for a jacket to have in a pocket in case in gets cold or windy. 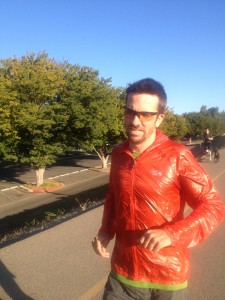 For wind, though it’s light, it protected me  a lot better than I was guessing. I haven’t been in gale force winds, nor have I tested it in freezing cold wind, and my guess is that it’d be under suited for that.  If I had a long sleeve wool shirt on under this, I can’t envision ever getting cold.

It claims to be rain resistant, and it is to a point. Light rain and wetness don’t get through, but any heavy application and it falls short.

The jacket is nearly translucent. Anything you’re wearing will be tinted the color of the jacket and will be fully exposed. No Hooters shirts, folks.

I’m 6’2″ and weigh 165 pounds. My coat size is a 42 long. Generally, I wear a large jacket, but I wanted something that wouldn’t flap around and the medium fits perfectly. It’s long enough for my ape-ish arms and falls comfortably past my waist belt.  The Ghost Whisperer has an athletic fit that suited me well. I tried on the large, and it felt billowy. 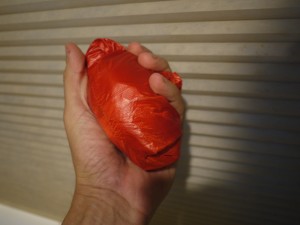 There are a few issues with this jacket…a few that can be corrected and at least one that probably can’t.

First, I’d like to see a hood latch of some sort. Sure, I can tuck the hood (when not in use) into the jacket, but I would rather see a very minimal Velcro tab that secures the hood to the collar.  As it is now, the hood catches wind behind me and is a bit distracting.

I would also like to see Velcro closures on the wrists.  If they’re made small enough they would barely add any weight and would allow the user to push the sleeves up to the elbow without the fear of stretching out the jacket.

Not a complaint, but I have big concerns about washing this thing. The tags indicate that it can be washed in the machine, but I’m reluctant to do that.  After a good run, I’ve been wiping

down the insides with a paper towel and water and it hasn’t begun to stink.  We’ll see how it does after a few months of this.

My only real complaint is that it’s tough to get off. Since it’s essentially a plastic bag, it sticks to the skin and needs to be inverted to be removed, sort of like surgical gloves. Not a big deal, but putting it back on (when it’s wet with sweat) can be trying.

I purchased mine at the Mountain Hardwear store in Oakland. The MSRP for the Ghost Whisperer is $165.

Depending on how you look at it, this is either obscenely expensive for such a lightweight

jacket, or it’s it’s an incredible bargain for such a lightweight jacket.  I see it as a bargain, as I’ve found myself wearing this thing while running, shopping, and hanging out with the family.

Even with the steep price, I highly recommend this to anyone looking for a lightweight shell that’s great for running trails and running errands.