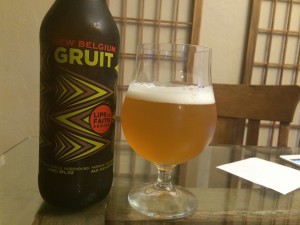 First things first.  If you only know Colorado’s New Belgium Brewery by their (good but boring) Fat Tire Ale, you’re seriously missing out.  Le Terroir is one of the best beers I’ve ever had and it can be had for about $9…if you can find it.

And the Gratzer is a unique beer that keeps me interested. They’ve got a massive barrel-aging system and are constantly teaming up with partner-brewers for fun new styles.

I picked up the Gruit at my local beer store for about $9 as the only other example of that style I’ve had left me floored and wanting more (my review).  The bottle of this indicates it’s brewed with “bog myrtle, horehound, yarrow, wormwood, and elderberry” and that to me sounds bizarre and awesome.

It pours a nice yellow-gold with a decent head this dissipated in a few minutes to just a light lacing on top.

The smell has strong yeast and bread overtones with some citrus. Definitely smells like a fun beer, but more Belgium-y than old Scottish.

First drink is wow. Big and fun and yeasty.  Not hoppy, as I’m assuming the brewers bittered the beer with wormwood instead of hops, as was the old custom for this style.

Unfortunately, it leaves nothing on the pallet.  Another drink. Fun up front…pretty empty on the back end.  At 6.6%ABV I didn’t expect anything boozy, and it wasn’t. The alcohol was well hidden behind the yeast, which in my opinion, overpowered the beer without including the balance of spice or hops.

Hate to say, for such an enticing brew, it got pretty boring a few drinks in.

My other concern is of those herbs listed, the only flavors I trust myself to recognize would be wormwood and elderberry, and I couldn’t place either in this beer.

For under $10, it’s still an interesting beer if you like trying new styles, but I’d strongly recommend either grabbing a bottle of the Le Terroir for the same price or saving your money for Sonoma Springs’ Green Purl Gruit.

(note: If you find Le Terroir, but buy more than one. It’s a limited release that’s going faaaast!)