Nick Arciniaga will line up at North Face Endurance Championship with the fastest marathon time of anyone on US soil. Faster than Max King (2:14). Faster than Sage Canaday (2:16). Faster than Jim and Zach (though I don’t believe either have ever run a proper marathon) and Ian (2:21) and everyone else.  A 2:11 puts Nick into a special category—one that we haven’t seen on the trails before, and another thing…Nick’s determined to win it. 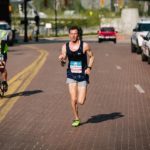 So what does that mean? What does 4:59 min/mile get you when you’re dealing with twice the distance, hills, mud, hydration, nutrition, and considerably less money than any of your other races?  Ethan and I chat with Nick about his upbringing, his love of running, and what’s leading him to try out trail ultramarathons in the first place.

One things is for sure, and that is Nick is not new to the trails. From running XC in high school and college to living with pro MUT runners in Flagstaff, Nick’s got plenty of trail experience and MUT mentors to learn from. He mentions in the interview that he’s training with Jim Walmsley, Chris Vargo, Cody Reed, and Tommy Puzey, so we’re not questioning whether he knows what he’s getting himself into.  Quite a group!

In this interview, Nick discusses his desire to break records at North Face and Western States, despite never having run a trail ultra before, but explains that confidence is necessary when audacious goals are set.  Much of this comes from his competitive childhood, and we talk about the atmosphere in the Arciniaga household that still hold true today.  Game. On!

Nick, Ethan and I also talk about Nick’s original strategy of basing his workouts after that of streak runners, but found that injuries resulted quickly and chose a route with more rest days.

We discuss the professionalism (or lack thereof?) in our sport, and whether there’s money to be made in it from an athlete’s perspective, and talk about the details of coaching–and getting coached–for big races.

Looking for quality compression gear that doesn’t have a seam running right through the nether regions? Be sure to check out RUHN Seamless Technology for a great solution. The company slogan is “Let Our Goods Protect Yours.” Run by an endurance athlete in Utah, RUHN has both bottoms and tops for men and women.  Read Ben’s review of the base compression shorts right here. Click the logo to the left or this link right here.  Big thanks for their support.

Be sure to click the links above for Nick’s blog and social channels.

Outro music is by Matt Flaherty. Here’s his music channel, and here’s our original podcast with him from a few years ago.

Here’s a link to the Broken Arrow Skyrace.  As I mentioned, I’ll be announcing the race and finishers along with past URP guest Stephanie Case. If you haven’t heard that episode, please do so soon. She’s an incredible woman and I’m anxious to share the mic with her.

Ben goes over a lot of shoes in his Shoe Roundup at the end of the show. You’ll have to dig though the gear review archives to learn more about some of the models he discussed.

5 Responses to "Nick Arciniaga – Can 2:11 Convert to Trail Ultramarathon Success?"