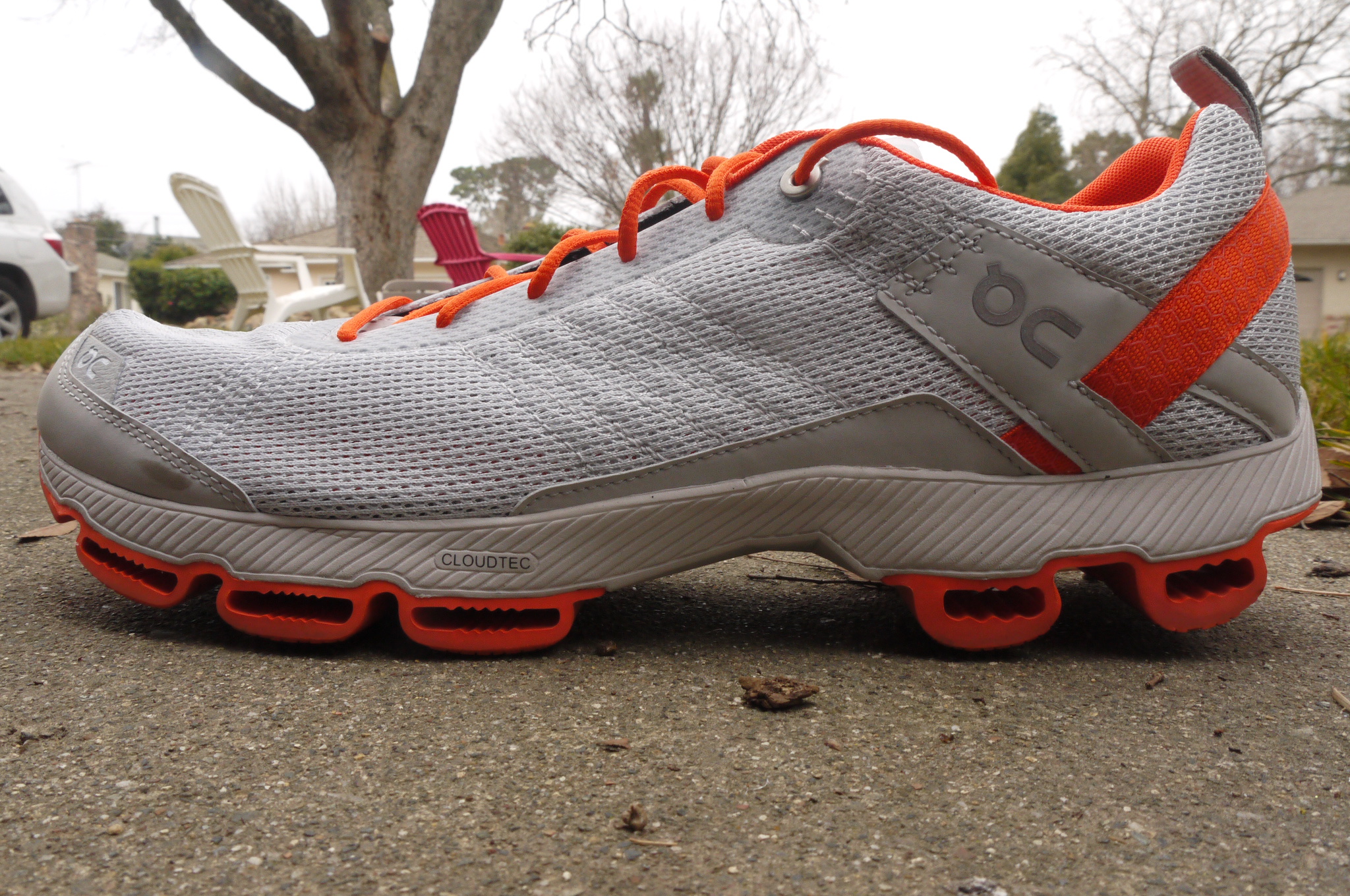 When I pulled the bright white and orange CloudSurfers out of the On box, I rolled my eyes a bit. Oy, a new gimmick. And a flashy one at that.

These look like a normal pair of white running shoes placed atop a bed of segmented neon orange rubber springs. Definitely weird, but I was interested by the company’s claim that they offer a “cushioned landing and a barefoot takeoff.” OK, I’m intrigued.

I’ll admit, I’d never heard of On before. Turns out it is a Swiss company that offers four styles of shoes, all including the “springs” (On calls it the CloudTec system) that range from stability shoes to light racers. 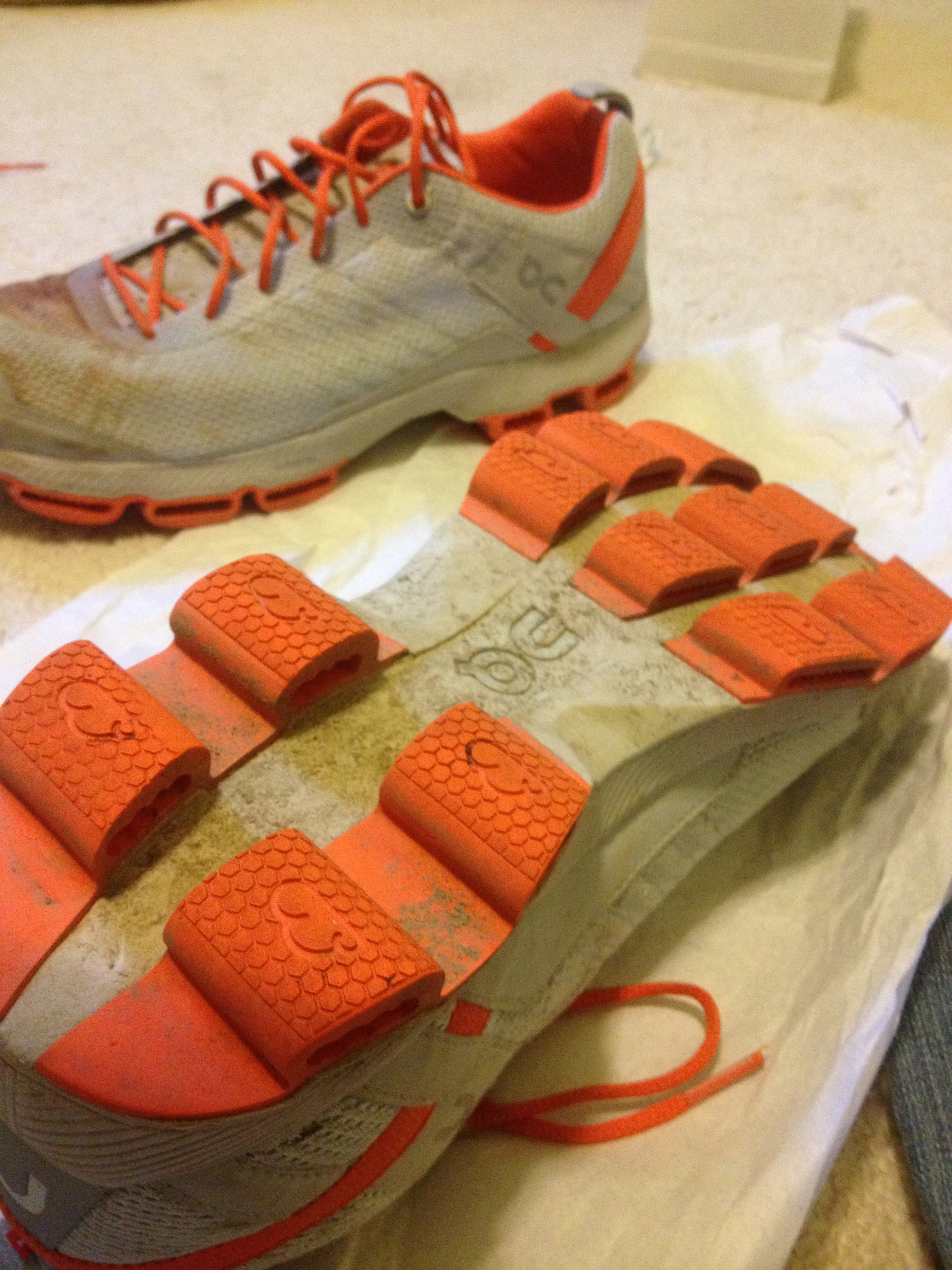 As a trail runner, my immediate thoughts were, “well, at least I’ll get em
dirty and they won’t look so white” and “uh-oh, what happens if a rock gets caught in the spring?”  More on that later.

The shoes well made (they’re Swiss, remember?), light enough, and the upper wasn’t too fussy.

I’ve worn them for about 100 miles now and am surprisingly impressed. I’ve never worn HOKAs, but if they’re anything like this, OK I get it. These have a soft landing, but my takeoff feels natural, a combination that will satisfy my need to protect my hips on landing and my need for foot speed.

My size 12s weigh in at over 13oz, making them the heaviest shoes in my closet, but they don’t weight me down at all.  The drop delta is 7mm, which is the sweet spot for my sensitive Achilles. 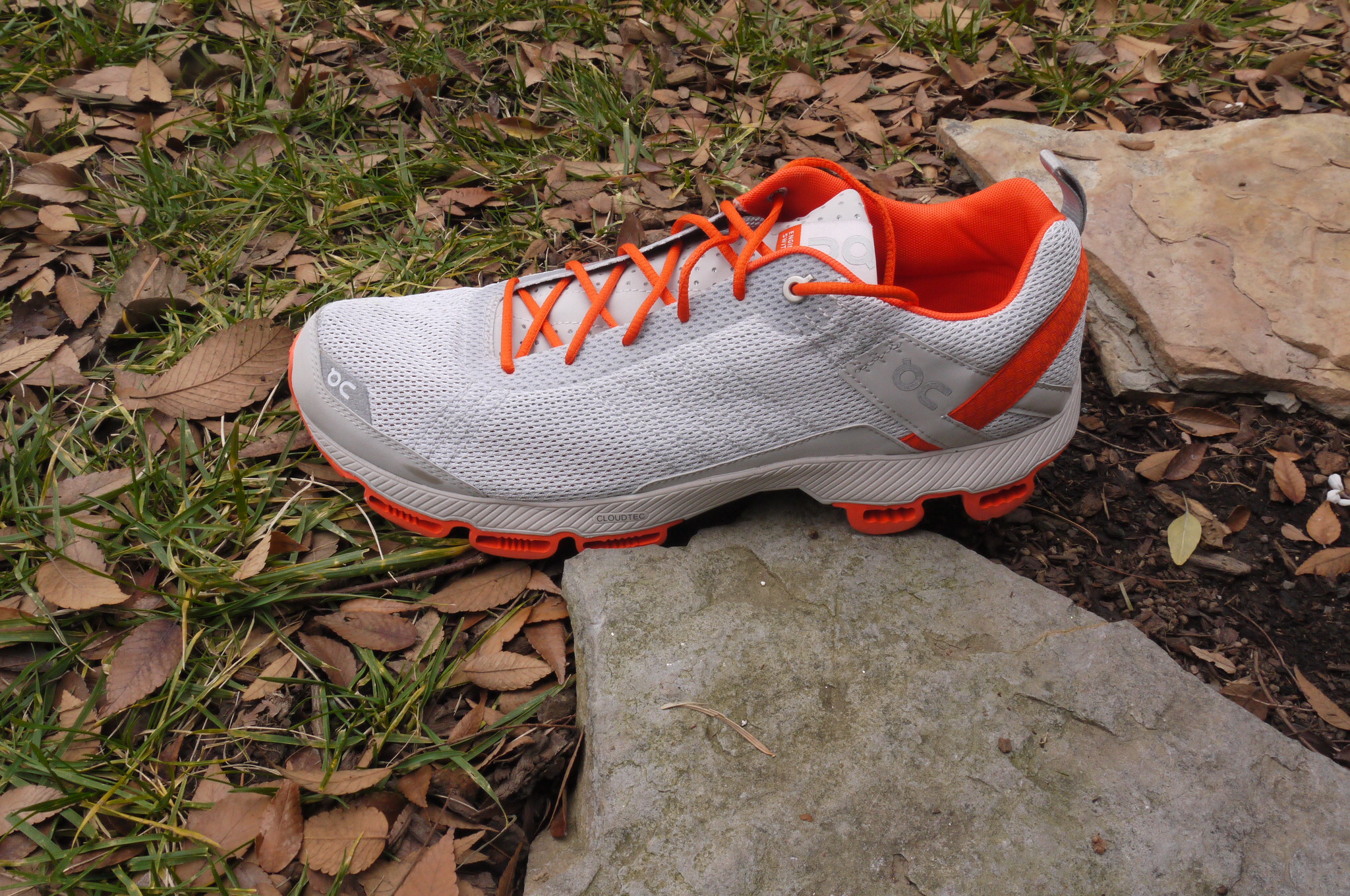 With such a strange sole design, a different footstrike is expected.  There is a feeling of a segmented strike, but it’s nothing that bothers me.  Not nearly as much as when water gets in the springs and squeaks for a couple of miles. Ugh. I’ll take both of those issues in place of sore hips any day.

The CloudSurfer is ideally fit for the roads, but while testing it, I’ve taken it on groomed trails and gravelly levee roads and have had zero problems. My fear of a rock wedging its self into the “spring” hasn’t happened yet, but I won’t be surprised (nor happy) when it does. If you’re taking this shoe out on a long trail run, I’d highly recommend bringing a chopstick in your pack to use for poking. 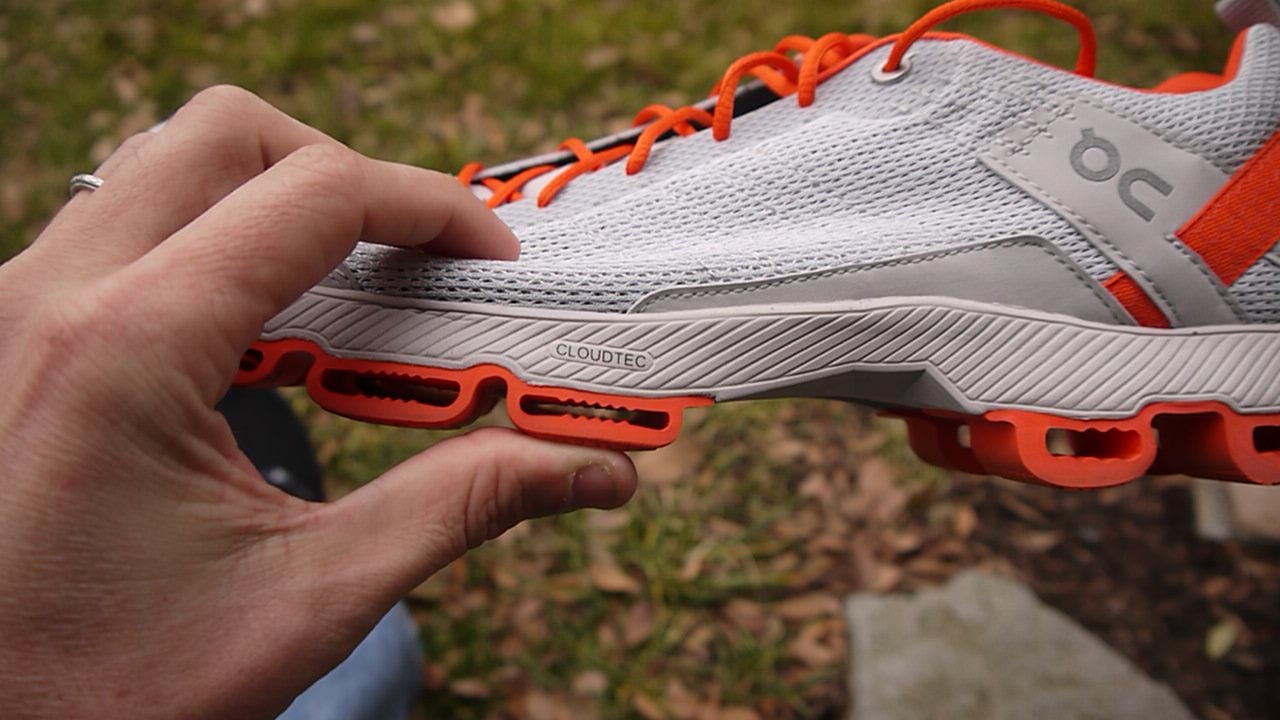 For Ultrarunners? We all run in normal shoes, right? These seem to protect my joints pretty well, while still allowing me to run somewhat “naturally.” This has moved to the front of my shoe rotation.

My other concern for the shoe is the durability of the “springs.” While the last and the upper seem to be built well, I’m interested to see how the springs respond after 500 miles. I’ll be updating this review in a couple of weeks to see how they’re doing. 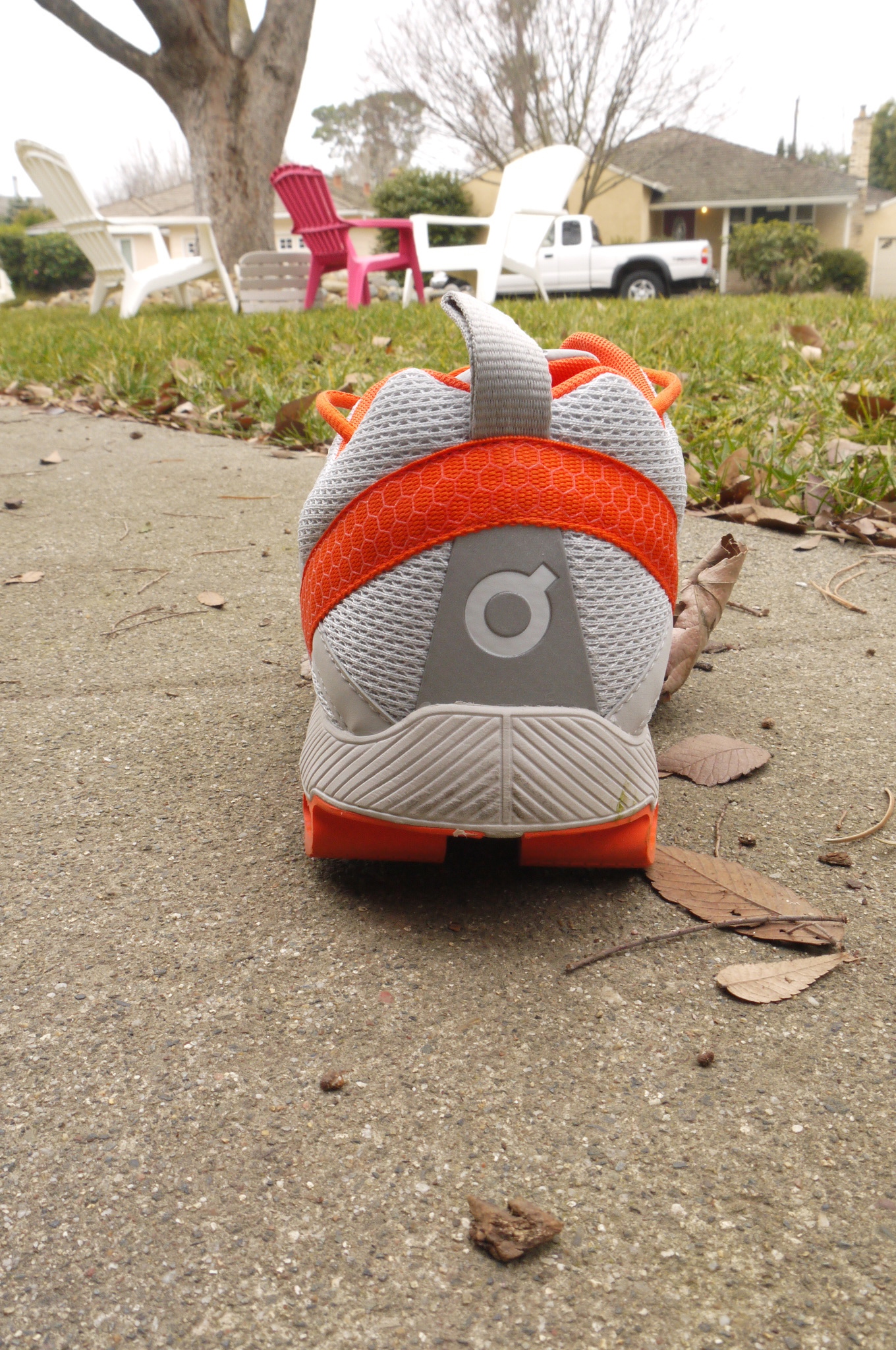 Overall impressions after 100 miles: I like these a lot. I’m able to run hard (7mpm pace) for a sustained time without subjecting my hips to torture.  Very impressive road shoes. MSRP: $129

These have been my go-to shoes now for at least a month.

My legs don’t get tired and sore from long runs. The cushioning has held up better than expected and the shoes are still quite soft on the landing. I’ve got  a lot of shoes, and these are my #1 for anything over 90 minutes. I’ve also run on quite a few trails (simple and groomed) and have yet to lodge a rock in the pockets.

If I run through any water, they squeak like crazy and it drives me insane. I’ve also developed a tear/stitching issue on the front of the shoe. Probably 1.5″ long, it hasn’t grown in a few weeks, but it is a concern.

CloudRacer: I’ve also been trying out the On CloudRacer, a lightweight (9.75 oz for a M12) racer that offers the same CloudTec system, albeit on a lower platform.  For comparison, the lower left picture shows one quarter fitting snugly into the CloudTec pocket. With the CloudSurfer, I’m able to fit two quarters and a dime in the same area. 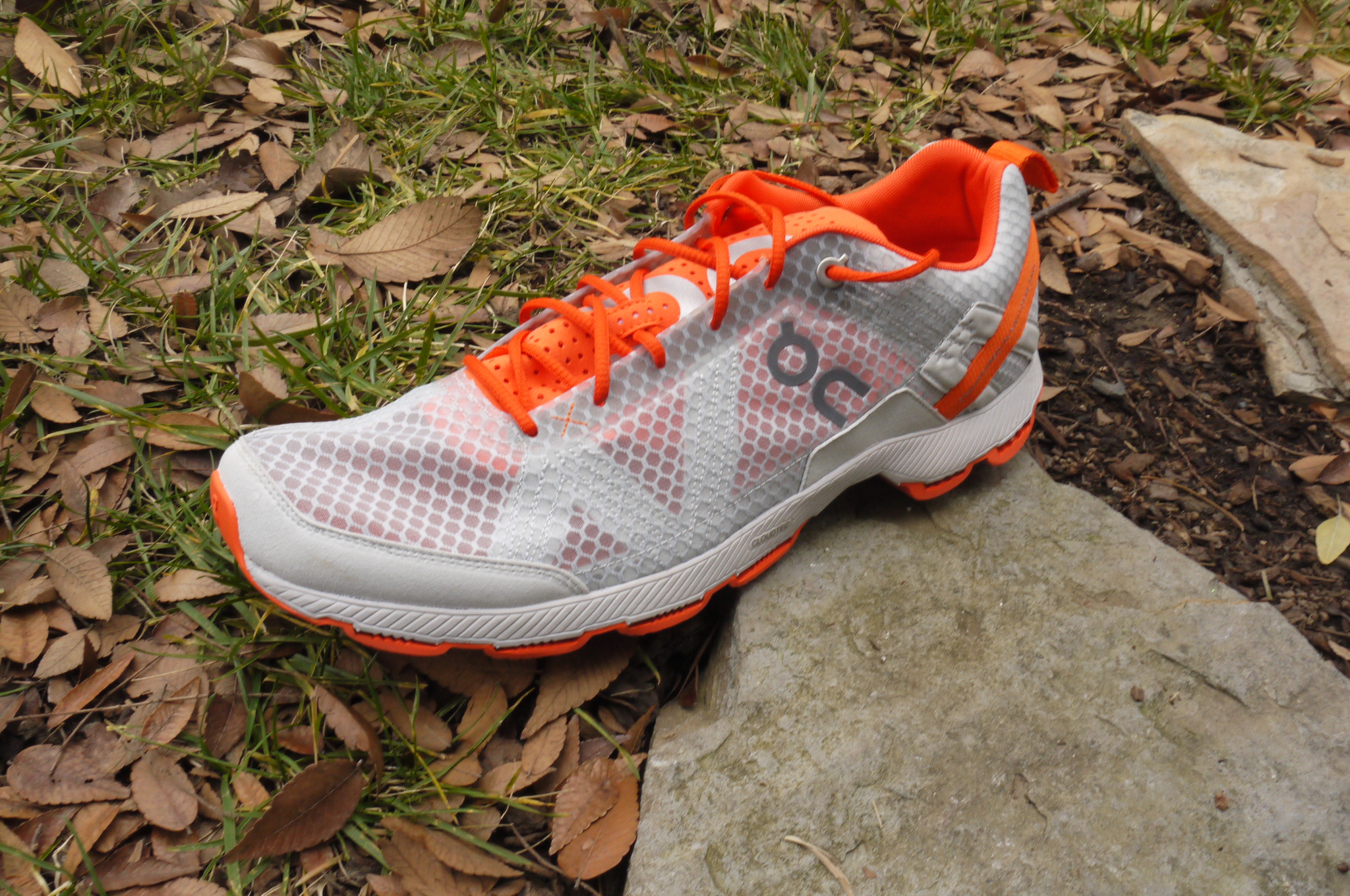 The upper is more of an exoskeleton and it’s got a lightweight and perforated tongue.  Definitely a fun shoe to run in, though the liner warns “May self destruct after 220km.” So it’s not built for ultra-distance races, but I’m doing speedwork in them and having a great time.  Expect updates after a few more weeks in them.

I’ve worn the CloudRacers for a few workouts and am really enjoying them.  In training for a late Spring hundred, I’m also doing 5ks and 10k races for speed work.  I’m generally wearing these shoes, but in the last 5k started to develop a blister on my Achilles for some reason. Fault of the shoe or my own, I’m not sure, but they feel great running fast and are super duper light.

6 Responses to "On CloudSurfers–Initial thoughts and updated observations"