Last month we posted a two-part series of the Orange Mud Endurance Pack. Marketed as a hydration pack that fits any body type on either sex, my skepticism was on high alert, so I asked two friends to review it for me.  Laura Matz’s female perspective review can be found here.

She then handed the Orange Mud Endurance Pack off to her husband Kynan for him to review.  (The pack was provided by Orange Mud for review purposes, all words are their own, and neither Kynan nor Laura were compensated for their work.)

His review can be found below:

I received the Orange Mud Endurance Pack to review after it had been put through its paces by the more svelt and graceful female runner in our household, with the request to evaluate its performance from a male runner’s perspective. It served as a hydration pack on a 40 mile training run, then as just a gear vest during a recent 100K. Surprisingly, my observations of Orange Mud’s race vest are fairly universal to both applications. 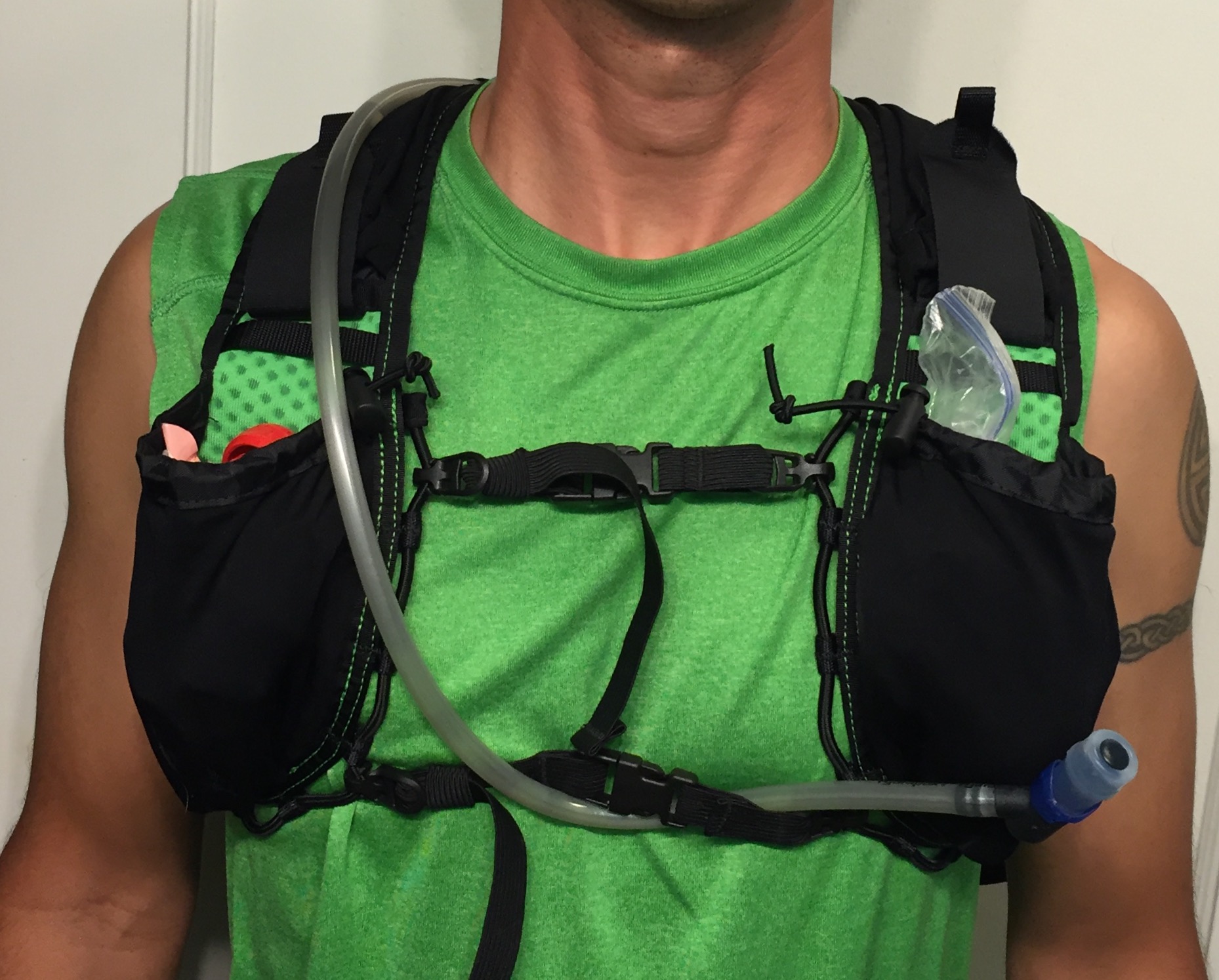 Things I Enjoyed About the Orange Mud Endurance Pack:

Strong Velcro, breathable back fabric, extremely elastic cargo pocket material, tough lining and quick drying all made me feel like I could just trust the gear and forget it. The elastic chest straps also made the pack feel secure without being constricting.

You can basically access anywhere in this pack without taking it off, save for the outer zipper pocket on the back. There are two open pockets in front, two Velcro pockets on the shoulders, two huge compartments in back, and an outer zipper pocket. I didn’t have any trouble snagging gear from the two open back pockets over my shoulder while pulling the pack up with my other hand, although others may find this to be more difficult. 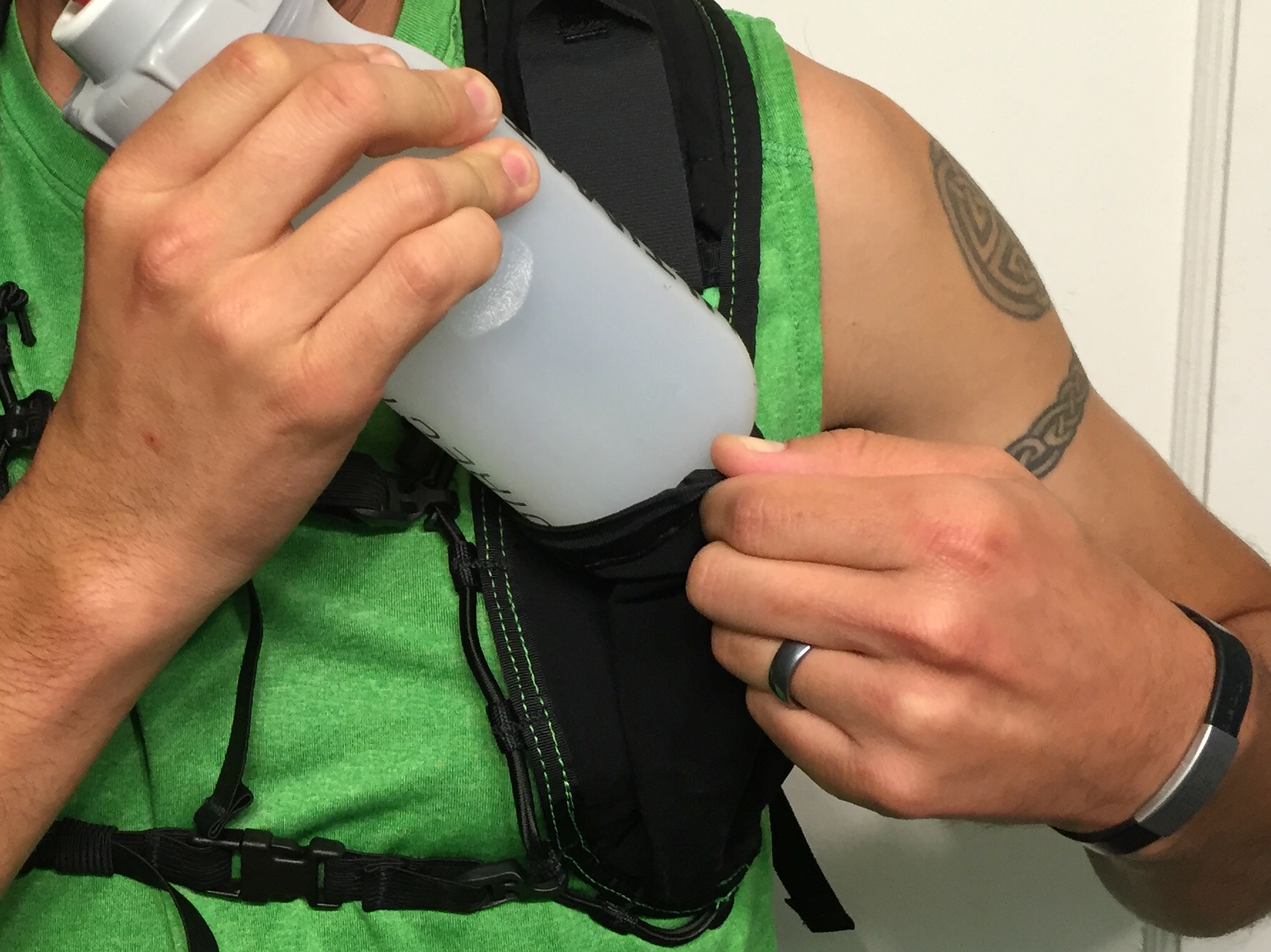 I liked having a big space to fill in addition to the bladder compartment (if you use a bladder). The biggest plus about storage in this pack is balance. Compared to most packs, shifting some of the gear weight from back to shoulders makes it easier to maintain a more natural running posture. I found myself standing straight up and breathing more freely without having to employ a forward lean to compensate for the weight on my back. 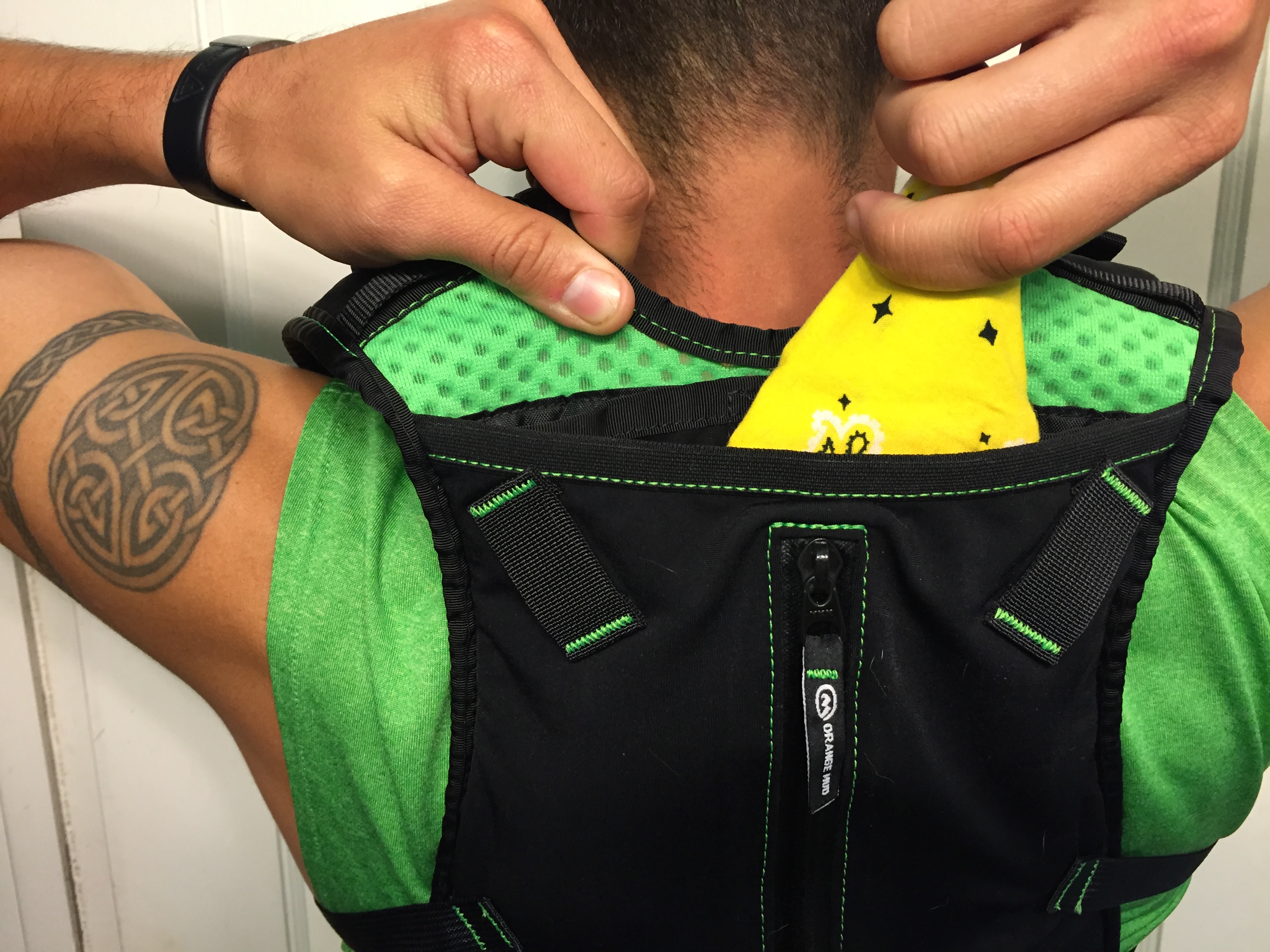 The cool thing about OM’s design is that the shoulder straps are spaced out further from center, so there’s no danger of neck chafing when adjustment straps are cinched down. As mentioned before, the elastic straps expand and contract with each breath and creek-jump-induced arm flail. Since it rides high up at the shoulder blades, there isn’t a tendency for a shirt to ride up underneath as with many packs I’ve used. The mesh Orange Mud uses is great for running shirtless as well without experiencing chafing issues.

Things I Found Annoying About the Orange Mud Endurance Pack

Universal fit is a double edged sword. Being able to say that one pack can fit everyone is impressive, but a minor drawback is that a scrawny runner is left with a copious amount of strap whipping around. I’m on the slender side, but within the average size window for a trail runner, and I had the chest straps cinched down nearly as far as they’d go. There were quite a few downhill segments when I experienced an occasional slap in the face. If you’re on the small side, be aware that you may have to cut the excess off after fitting yourself.

I realize that people like to route their hydration tubes every which way through their pack, and ultimately I ended up running mine over the right shoulder, under the lower chest strap (an option largely reserved for us guys), and sticking out in front of the left chest pocket. It’s not a huge deal to work around, but it’s also not a huge deal to throw a little clip into the design. 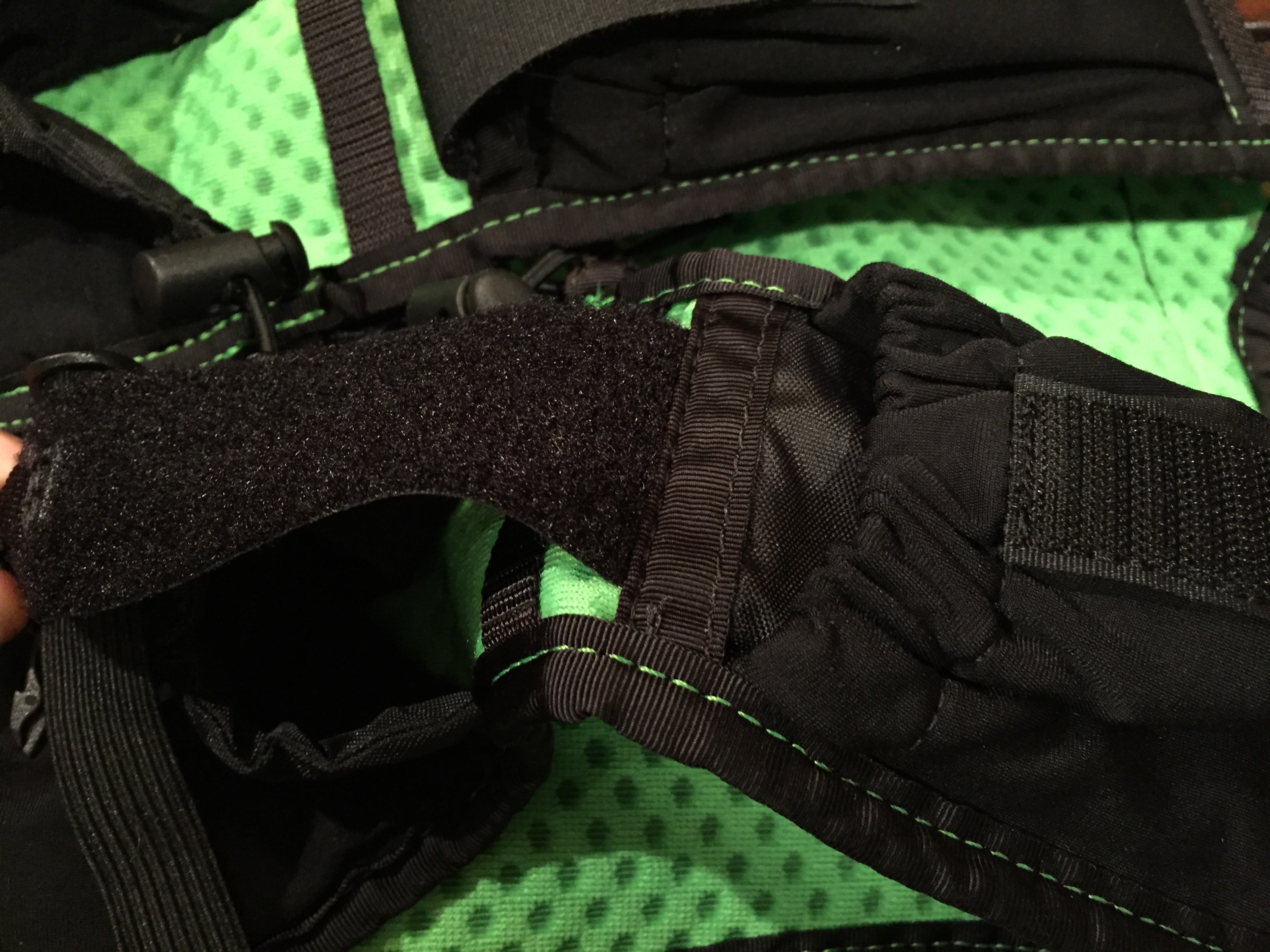 The expandable fabric of the pockets is awesome for stuffing them full of food, jackets, arm warmers, kittens, whatever. However, I found it awkward to shuffle my gear around efficiently at an aid station because I couldn’t shove a bottle in either of the front pockets. You can get one in if you really work for it, but who wants to waste that time? They cinch down with ripcord anyway, so it really doesn’t make sense for them to be just mockingly too small for a standard bottle to easily slide in when fully open.

Tums/ginger, anti-chafe, TP, medications, small bandages, etc. Aside from being the grocery list for the lamest party in the world, these are things we carry which are small, very specific in purpose, and inconvenient to access only from the bottom of a pocket stuffed with other things. A couple small pockets go a long way in being able to organize your gear so you can focus on running. 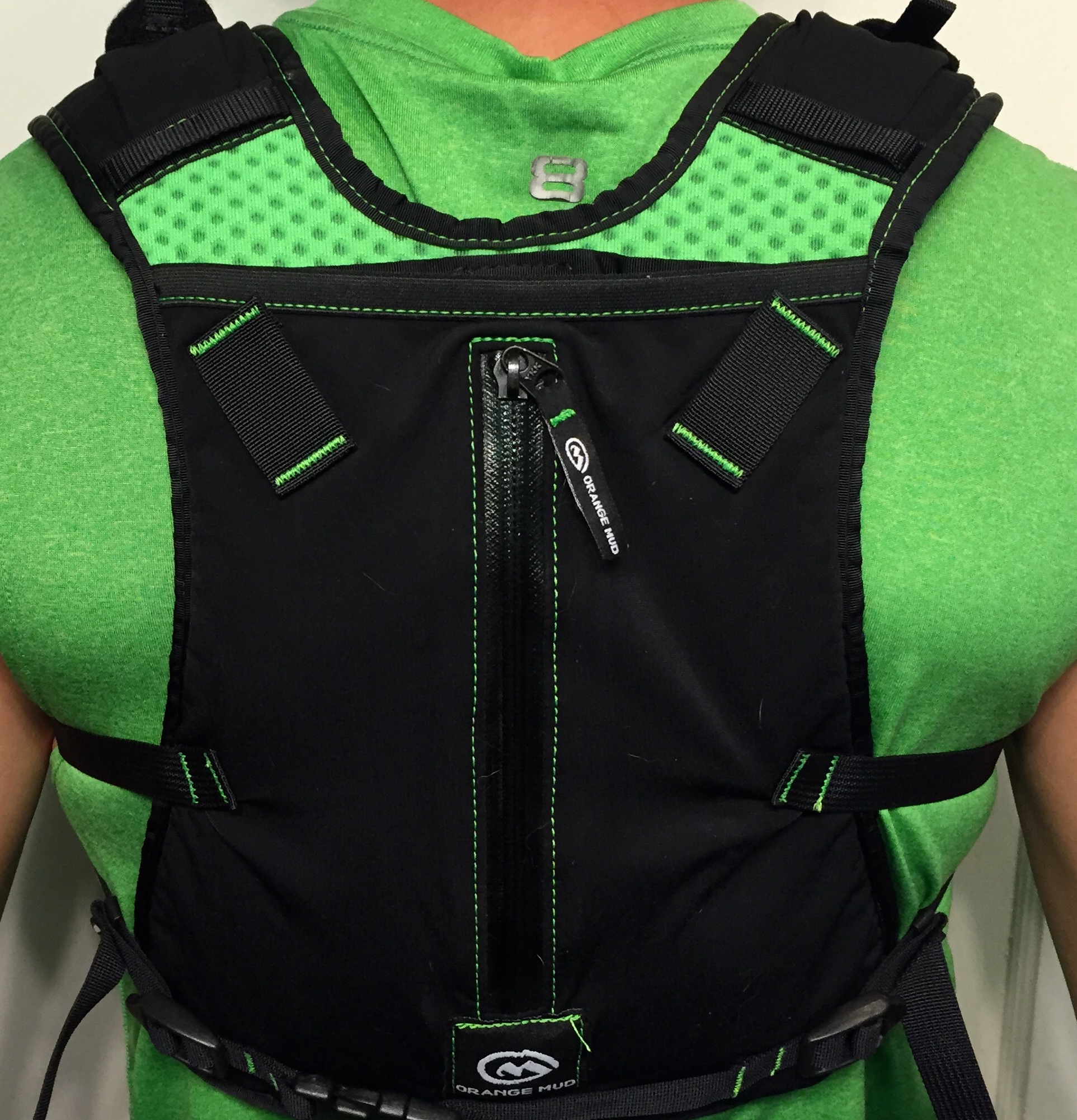 Overall, this is probably one of the most natural feeling packs I’ve used. At the end of the day, any pack will hold stuff. The trick is finding the layout that best fits your individual needs in order to streamline your gear process, allowing you to focus on the running part. The Orange Mud Endurance Pack brings some innovation to the table, provides different gear strategy options, and seems tough enough to withstand a ton of abuse and keep coming back for more salt-crusted adventure stank.

Kynan Matz is a tower climber, musician, woodworker, and trail runner from Sacramento, CA. He is most often seen working on his dirt sock tan, standing behind a snack food covered folding table, or annoying others with puns and dad jokes. Probably all three at once. His proudest running accomplishments are Tahoe Rim Trail 100M 2014, Pine to Palm 100M 2015, and being involved in his local trail community.