Ultramarathons–and running in general–appear to require not much gear, right?  However we all know that it’s easy to go overboard with things we “might need” or simply want.  There are the essentials, then there are the extras.  Same with podcasting.

I get asked a lot what gear I use and what my set up is like, and I’m often reluctant to reply. Not because I want to protect anything, but because I’m such a technological neophyte that it’s a bit embarrassing.  Seriously. I have equipment that I don’t know what to do with.

When this podcast started, my partner Scotty worked in production at a local radio station and URP had full access to their pimped-out studios, mixing boards, board ops, etc. Scotty knew how to handle all the technological aspects, and all I did was book guests, do the backgrounds, and talk.

Scotty had a lot going on in life and departed with his job at the station, as well as leaving URP in a matter of a few months, so all of a sudden I was on my own. Ack!  I had a semi-successful podcast, but zero equipment, and most frightening, absolutely no idea what to buy or how to use it.

Over the past few years, I’ve gone through a few different set ups (both with hardware and software), but I’ve found my current kit to work best. Here’s what I’ve got. 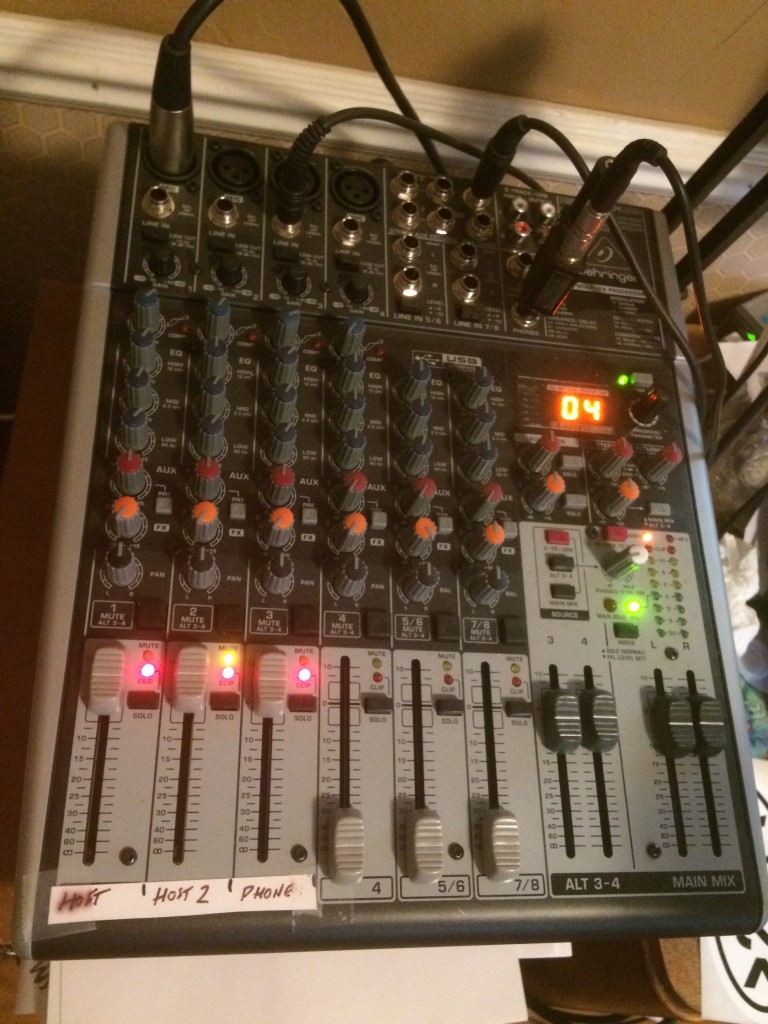 I use a Behringer XENYX X1204USB

4-channel mixer.  It’s far too much technology for me, but maybe some day I’ll learn how to use most of it. 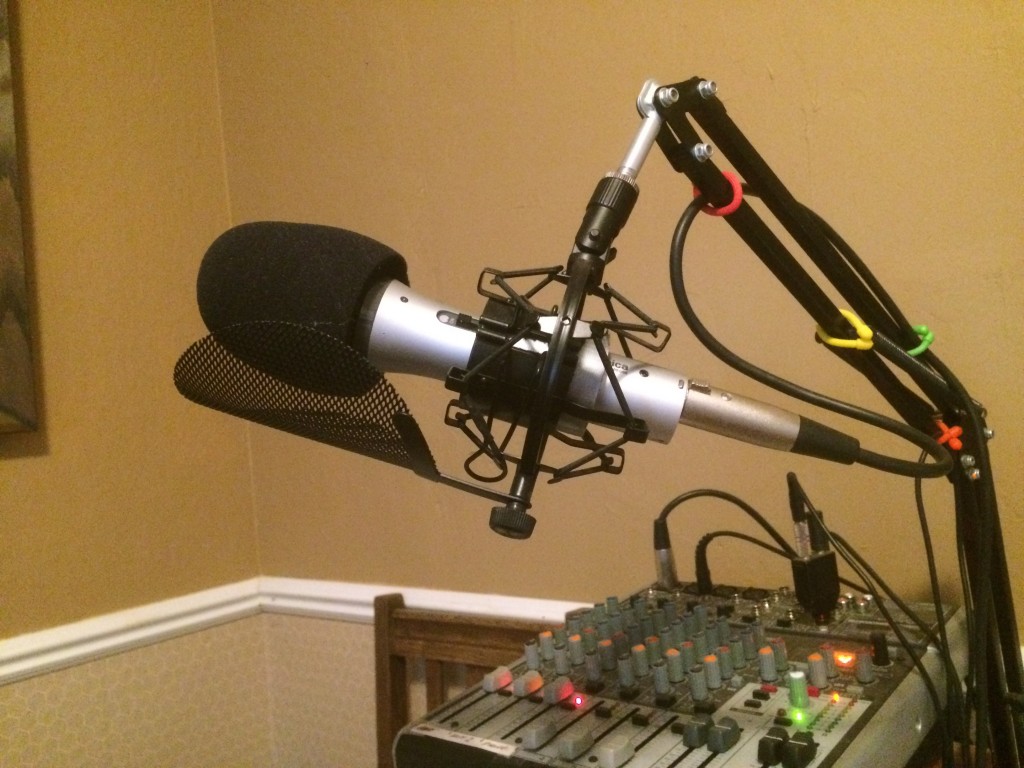 Boy oh boy can you spend a lot of money on mics! I chose to read a million reviews and go with the Audio Technica ATR-2100 dynamic mic. It’s got both XLR and USB inputs, an on-board mic control, and they’re only about $60 each.

c ($200) and have been incredibly happy with it. Big, rich sound that I like, but it’s limited to XLR inputs.

I bought some cheap windscreen covers that prevent most pops and I think they do a pretty good job. I’m sure audiophiles hear issues with them, but I’ve got no complaints from my audience.

My mic is connected to a suspension boom arm that’s connected to my desk in my studio.  I use twist-ties to keep the cables tight and out of the way. It’s amazing how much noise those things make when they hit other equipment.  Highly recommended to have your mic on a boom with the cables secured. 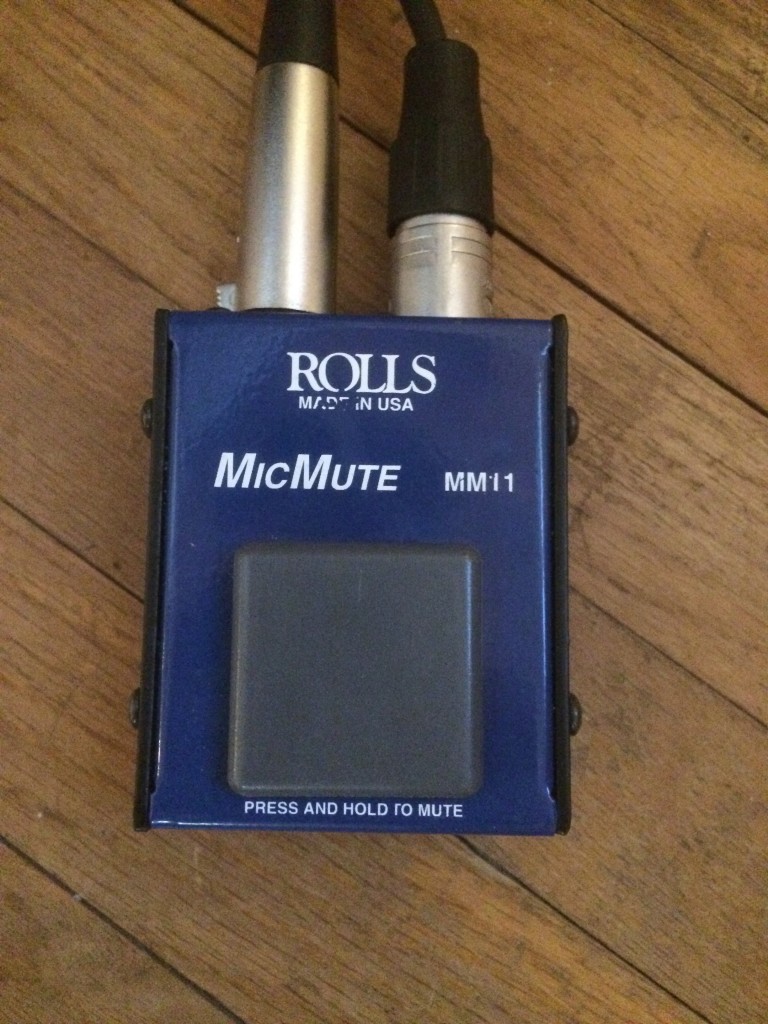 I also use a Rolls MM11 mic muting switch ($44). Coughs, drinks, burps, etc all disappear at the push of a button. I wouldn’t say it’s a mandatory piece of gear, but it prevents me from having to go back and edit out sounds.

Occasionally I’ll use some sound dampening shields. I found some plans online somewhere and modified them to suit my needs.  Your option is a $200 mini booth from Guitar Center, or Eric’s Home Depot Special. I used low pile carpet, two bent up paint roller screens, a couple of zip ties, and a clamp to attach it to my mic stand. 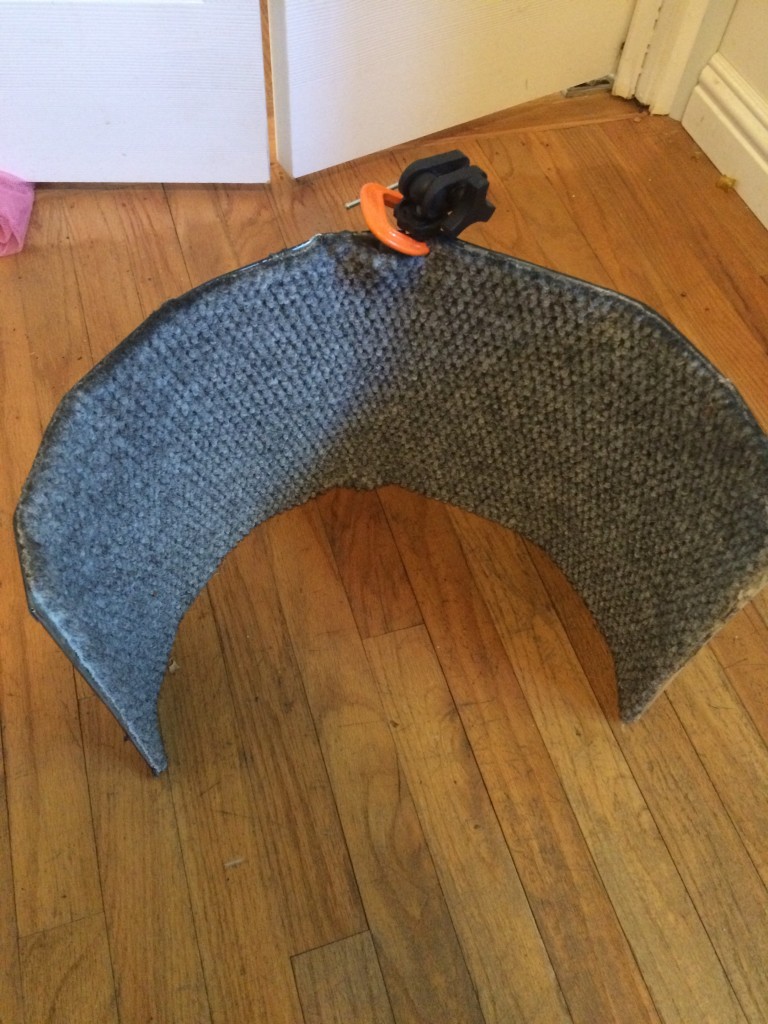 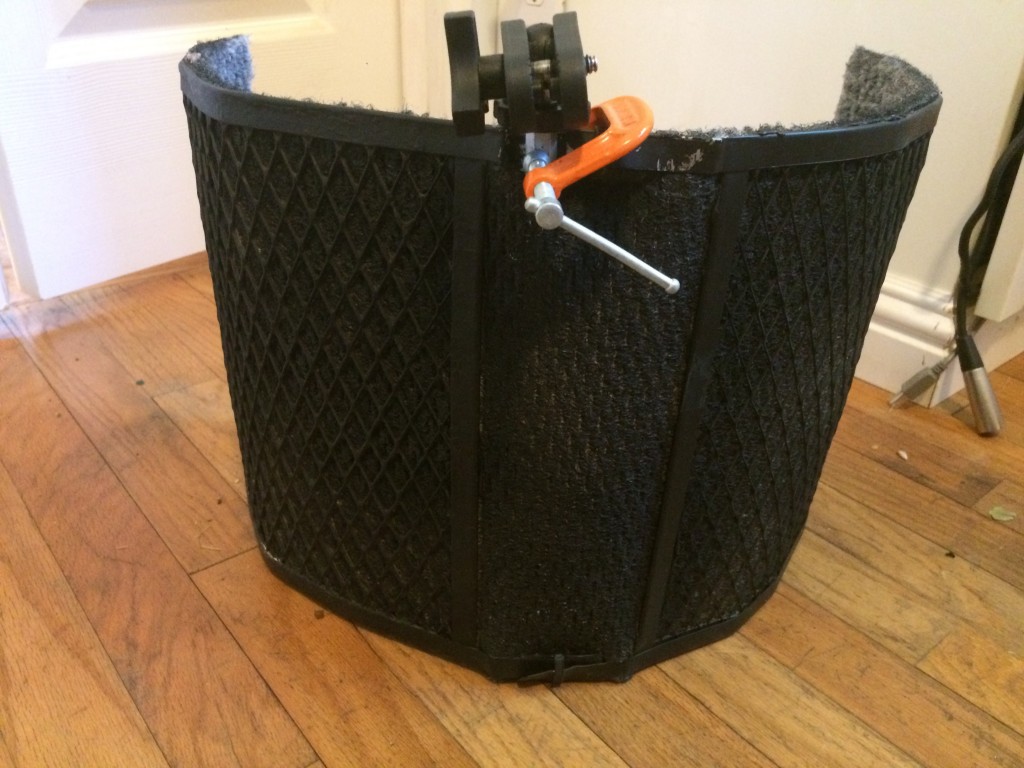 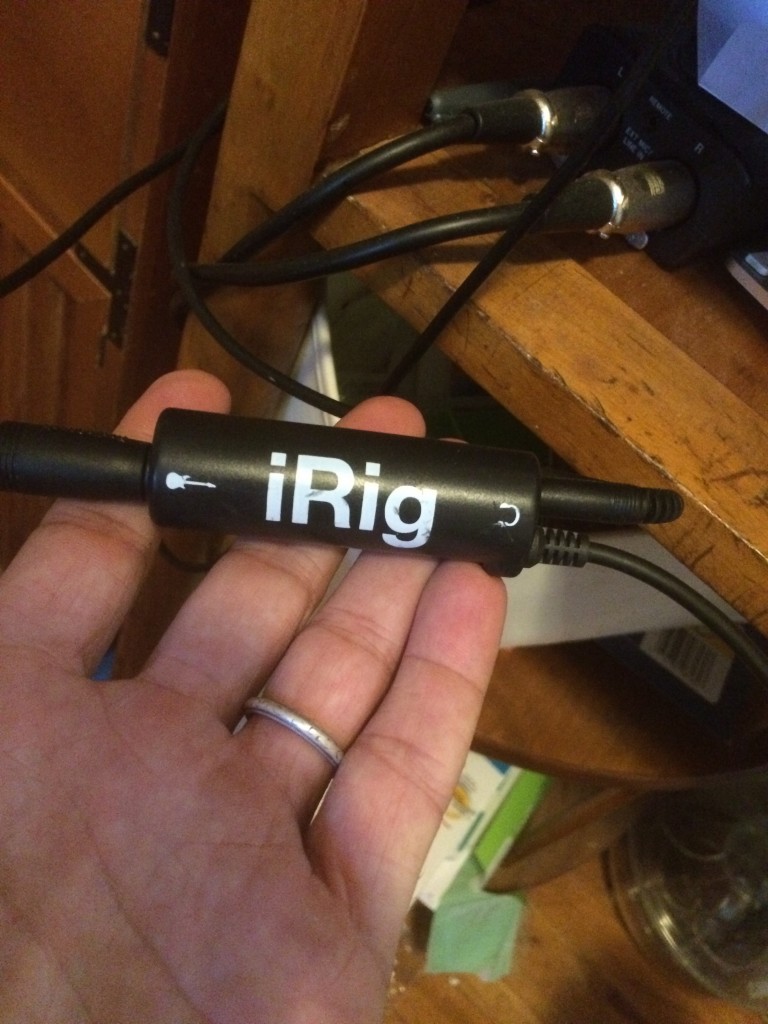 Ah, the big question!  One option for recording phone calls is to have a landline, then run it through a fancy device that’ll cost a few hundred bucks.  Sure, the sound quality would probably be better, but that’s too rich for me.  Instead, I use an iRig.  It was originally designed to record signals from an electric instrument (like a guitar) into a cell phone, but if rigged properly, it patches the phone signal thru the mixing board and right into AudioHijack (or any other recording method.)  And it’s only about ten bucks.  I know that there’s an iRig2 on the market with some additional features, but haven’t experimented with it.  It’s only $40 and probably worth it to try out.  If you need help setting it up, check online, or contact me and I might be able to help.

I bought a two pack at Guitar Center, and they work fine. I’d love to have some fancy pair, but chose to spend money on other gear (beer) instead. Mine are made by AKG and I think I paid $80 for a pair of two. 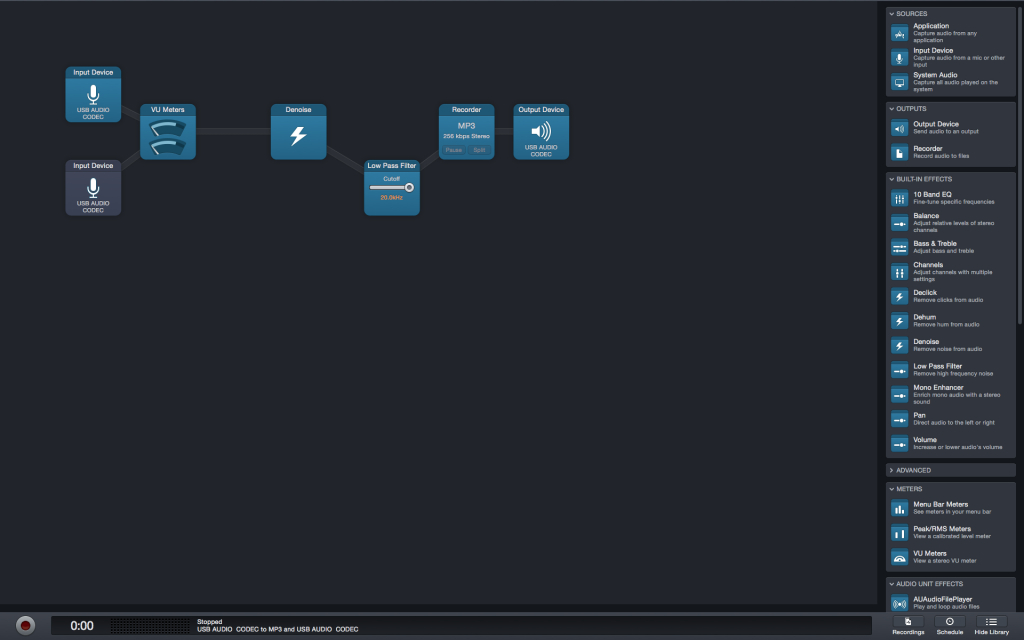 When we started, the production was recorded to a hard drive, then dumped into GarageBand for production (light editing, normalizing, adding music, etc.)  I used that up until a few months ago when I started playing with RogueAmoeba’s Audio Hijack, and I couldn’t be happier.  It’s only $50 and allow drag and drop functioning in any recording scenario.  Skype to phone? Phone to phone? FaceTime to FaceTime? All no problem, AND it’s never crashed on me. 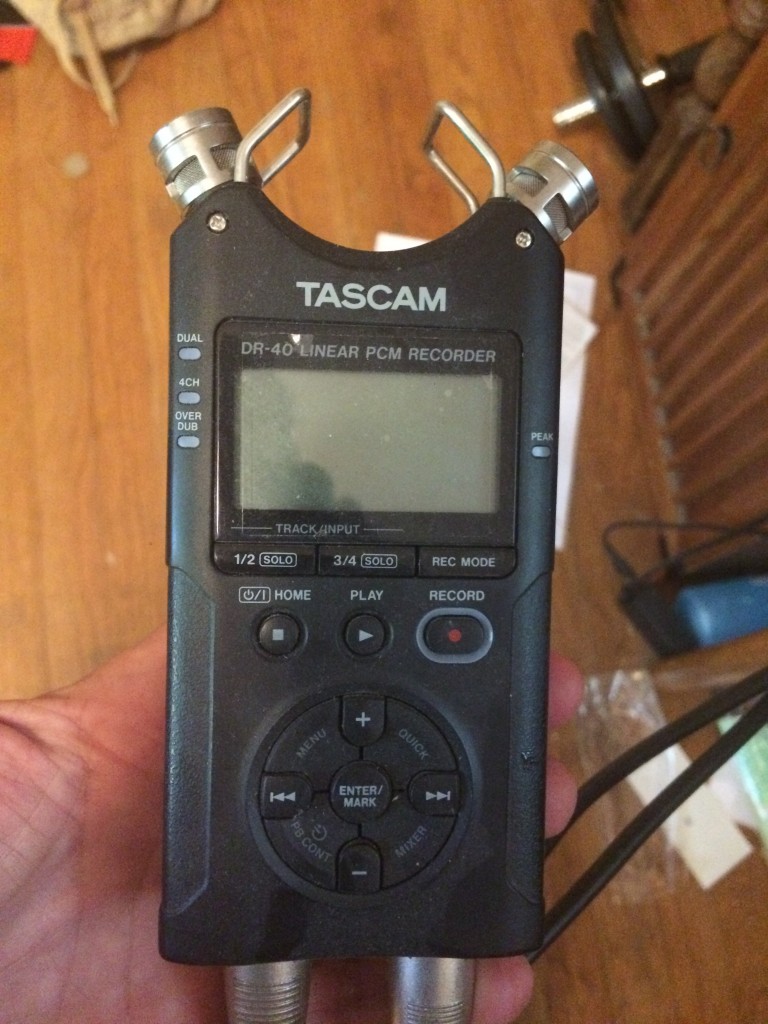 I bought a TASCAM DR-40 Digital Recorder ($150) when I started out on my own and used it extensively to record.  There are A LOT of functions and options to this little thing, and I’m pretty sure I was using at most 10% of them.  When I moved to using Audio Hijack, I abandoned use of it, but will likely use it again when I do interviews at races. 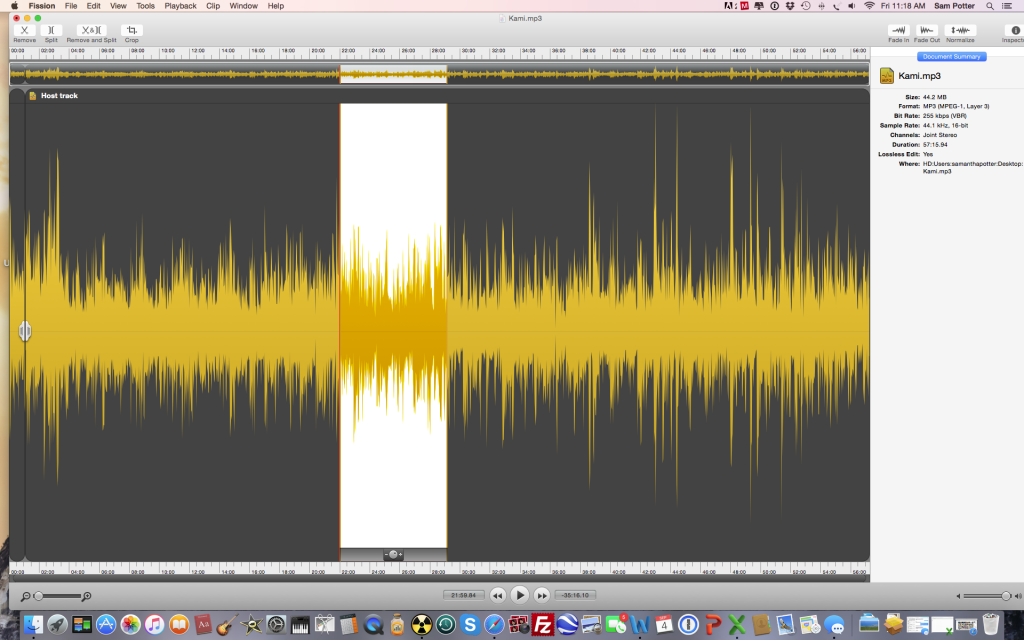 Audio Hijack’s partner is called Fission ($30, also from RogueAmoeba) and though it’s not as pretty as GarageBand, I’ve found it easy to use and really like some of the close editing functioning.  (Of note, I don’t edit URP interviews in the conventional term…I’m talking about ad spots, intros and outros, etc.)

After it’s produced, I run it through Auphonic, an online resource that does a great job normalizing the levels (even though I’ve already normalized it in Fission), as well as allowing me to ad a custom image and other tags that’ll carry over to iTunes.

I’ll be honest, this is where it gets fuzzy for me.  BluBrry is a service that connects the episodes from my server (external thru an awesome guy in Michigan) to iTunes and the rest of the internet machine gizmo.  Most podcasters also use Blubrry to host their episodes.  I use it extensively to track metrics, as I’ve found their stats to be accurate and easy to access.

I use a basic Jetpack player on WordPress.  Didn’t even realize there were options until a few weeks ago.

If you’ve got any questions, I may be able to help, but I’ll likely recommend you ask a real expert.