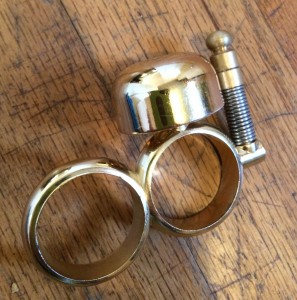 As a runner who spends a significant amount of time on a paved/decomposed granite bike path, I have a Pavlovian reaction to hearing a bell. I keep my pace, but step to the side to make room for the swoosh of a passing cyclist.

Actually, now it may be a runner who’s dinging me out of the way, thanks to the Runbell.

I bought the Runbell off a Kickstarter deal a few months ago and have been using it for the past six weeks. It’s a strange piece of gear. I totally understand and appreciate the need for the bell, but it’s something that certainly needs to be used judiciously and in the right environment or you come across as a total jerk.

Let’s get that out of the way. It’s a brass bell that’s worn on your fore and middle fingers with a spring loaded striker that’s activated with your thumb.  Very well made and packaged like a piece of jewelry, it comes with a few plastic ring sizers to fit different fingers.  Some people have remarked that it looks like brass knuckles, and I suppose if I were ever to get into fisticuffs with someone, the Runbell would come in handy. Probably not gonna happen though.  Currently available in a few sizes and two colors.  $25 online. 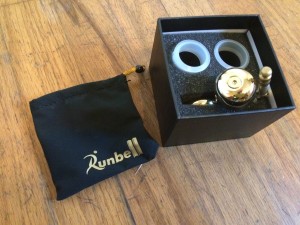 Just as bikes have bells, the Runbell is designed to politely alert other pedestrians and cyclists that you’re behind them.
For whatever reason, cyclists with bells is acceptable, but runners with bells has, let’s say, not been embraced by the general running public yet.

I’ve used the Runbell on the bike path, street, and trail. Here’s what I found: