I asked Jade Belzberg (you’ll hear her on a podcast soon) to review the Salomon S-Lab Sonics for me, and planned to combine her review with my notes on the shoes for a well-rounded perspective.  However, shortly after starting her trial with the shoes, she ran Zion 100 and decided to take a few weeks off.  No problemo, I’ve combined her limited review, and my two month trial into one comprehensive post about what we thought about the new Salomon S-Lab Sonic. Any questions, just ask.

Jade: Ran roughly 30 miles, composed of a week’s worth of runs and hikes on road/pavement, trail and slick rock.

Eric: I’ve been wearing the Salomon Sonics for about two months.  My weekly runs have ranged from a few slow miles on pavement to decent tempo runs on trails.  Total miles ~200.

This review is for the Salomon S-Lab Sonic.  There are two other versions of the Sonic this season: The Sonic Pro and the Sonic Aero.  One of my complaints last year was the confusion caused by Salomon’s naming system…S-Lab X-Series, S-Lab, Sense, Sense Ultra SG…ack!  It drove me crazy.  Why they decided to have three different shoes share a name (and four different versions of the SpeedCross!) this season is beyond me.  To clarify, this review is for the Salmon S-Lab Sonic.

Jade: The color is a bit too bright, but the feather-weight lightness of the shoe more than makes up for the outlandish color; these feel, as someone reviewed, as though they are an extension of my foot. That said, I was worried about the 8mm drop.

Eric:  Goodie, goodie! Reminds me so much of the S-Lab X Series that I reviewed here last year.  Light, low volume, looks fast, great laces, no weird smell.  Strangely, one of the first things I looked for was the “lace pocket” from last year’s model. For whatever reason, the designers of the Salomon S-Lab Sonic didn’t carry it over in the S-Lab model, but the quick laces and pocket appear to be used on the Pro Sonic model.

The first time I slipped them on, they felt incredibly narrow in the heel, but that loosened up within minutes.

Fit:     Note–The Salomon S-Lab Sonic is a unisex shoe. No differences in fit or color for men or women.

Jade: I regularly wear size 9 shoes, but these 8.5 fit well; I wouldn’t want them any larger. The heel is snug and secure, and while this may be a problem for those with wider feet, the S-LAB Sonic work great for me because I have a narrow, flatter foot. The toe box is narrow compared to Altras, but they do allow for a comfortable fit. No blister problems!

Eric: Nice and tight. I generally wear a 12 and these fit well.  The Salomon S-Lab Sonic fits like a tight racer. 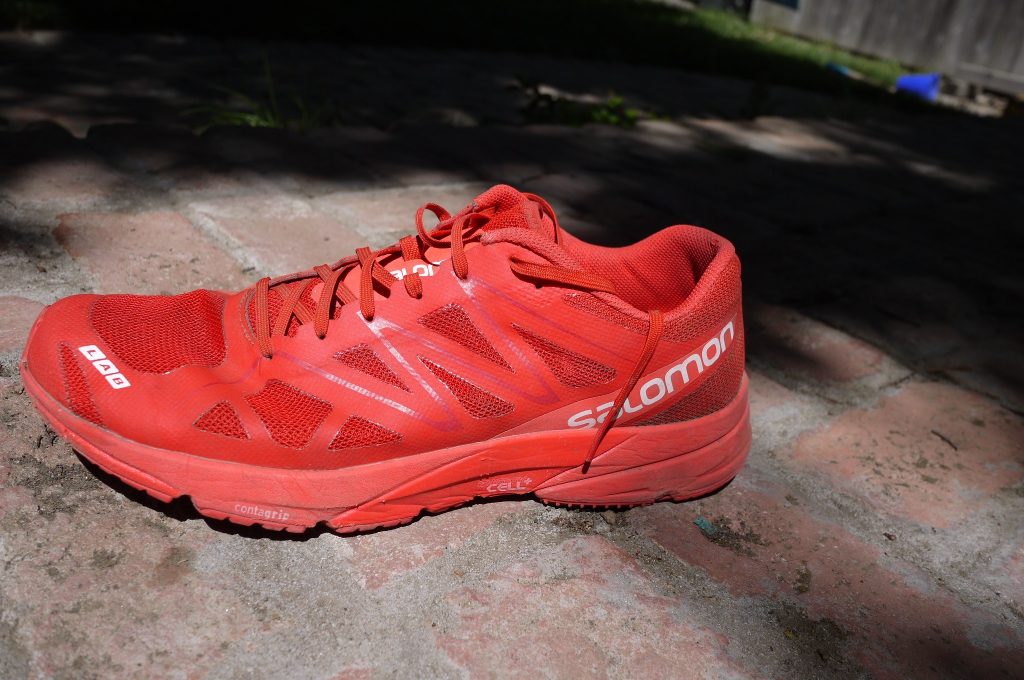 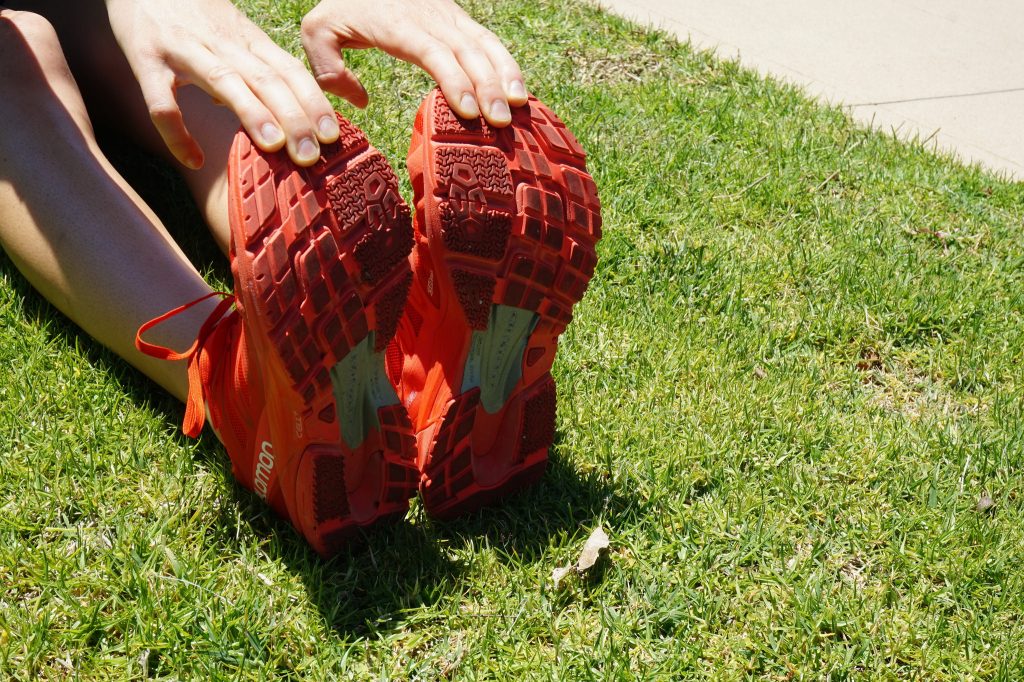 Jade: Salomons are generally a narrow shoe, and while I’m not a fan of the tight, European fit, I found these to be roomy enough to be very comfortable on all types of terrain. I didn’t feel any pinching or scrunched toes.

Eric:  The tight fit didn’t allow for any funky movement from my toes. No blisters or rubbing whatsoever.  Those in the Altra Mafia (“Give me toe splay or give me death!”) will not like the fit of the Salomon S-Lab Sonic. Trust me.

Jade: Super smooth and super fast. I personally wouldn’t wear them for more than a half-marathon (until further notice), but for shorter, faster, flatter races–these are great.

Eric: I’ll echo Jade for the most part, but would have no problem wearing these for a marathon or 50k.  They’re not cushioned like a traditional ultra shoe, but the fit is so nice (and they make me feel so fast!) that I’d put them in my shoe quiver.

Jade: If you’re paying upwards of $170 for a pair of running shoes, you better hope the quality is there. Luckily, it is–or the technology to design a shoe with such minimal weight. The upper toe area uses a thin mesh to allow for breathability (a huge plus in San Diego and warmer areas of the country) and the EndoFit technology ensures that the shoe fits snug around the heel and midsole. In fact, the mesh extends throughout the entirety of the upper shoe and while I like the breathability, I do wonder about the durability on the trail.

Eric: I’ve worn this on roads, trails, and been through plenty of sketchy rivers, brambles, and playgrounds.  No problems at all with the quality.  As mentioned in my review from last year, Salomon really seems to have upped their quality game in the past three years or so and the Sonic is on point.

Eric: I miss the lace pocket, but the new laces on the Salomon S-Lab Sonic still allow the wearer to get a tight fit without risk of lace slippage.  Again, refer to the multiple lace/fit options for the three different models.  As always, one of the best aspects of the shoe is the sock-like fit and gusseted tongue. There’s zero chance of the tongue moving around on top of your foot, and the overall fit allows for sockless running if that’s your thing.

What would you change:

Jade: If I could take these out for longer runs, I would–but in order to do that, some changes would have to be made such as better tread, some more cushion within the shoe itself and a little less overall snugness. That said, if you’re looking for a half-marathon or shorter race that makes uses of roads and trails, these are a great option.

Eric: This is a fantastic–near perfect–shoe for 30k and shorter for road and mixed trail racing. Aside from bringing back the lace pocket, I wouldn’t change a thing.

Who/What You Recommend These For?

Jade: Tempo runs, shorter weekend runs that use a variety of train, road/trail races. I’ve not had the chance to train them on very steep, technical terrain yet. but I don’t expect them to perform extraordinary well. Not recommended for ultra races as I can’ guarantee how they’ll feel with swollen/inflamed feet miles and miles into the race.

Eric: The Salomon S-Lab Sonic is a great shoe for midweek speed work, fast and fun trail jaunts, and shorter races.  If your running terrain is nothing but technical trail or slop, this ain’t the shoe for you. The tread is lacking for anything really loose or wet.

Jade: …Salomon shoes in general, you’ll like the feel of the Salomon S-Lab Sonic. Those with narrower feet and a preference for European-style fit will find these shoes to be snug–allowing for the feeling extra speed and precision.

Eric:  …Salomon, Inov-8, Icebugs, or the feel of domestic cross country flats, you’ll love the hell out of the S-Lab Sonic.  They feel fast, look fast, and are fast. 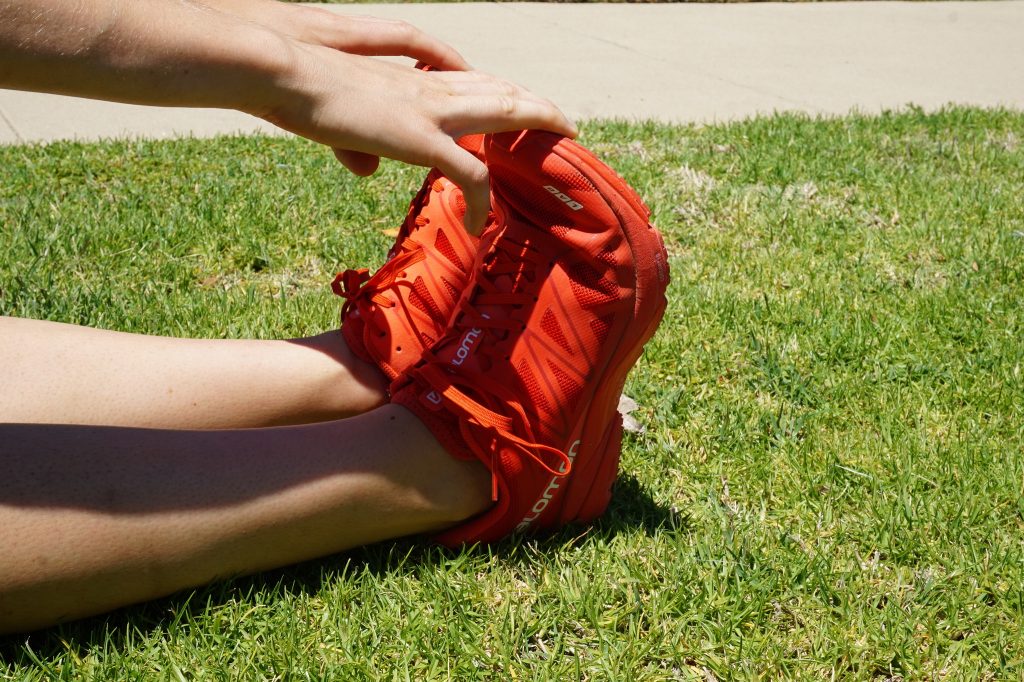 Would I buy them?

Jade: Yes! $170 is pricey for a shoe that looks to be made up of so much mesh, but I’m impressed by how quick they feel. They ride well, and I feel as though I’m like a ninja speeding through forested single track when I wear these shoes.

Eric: Yes. The price is on the higher end, but the fit is exactly what I like in a midweek shoe, and the confidence I get from running fast in them is priceless.

Full disclosure: The Salomon Sonic was provided to URP on a trial/tester basis. No expectation of a positive review was discussed and all words and images are our own.

I tested these shoes on pavement, sidewalk, sand, trail and technical rock after having the chance to visit three different states and a whole lot of variety. These shoes performed well, and, most noticeably, were extremely light. I generally opt for a more minimalist shoes such as Inov-8s or Altras, but I did enjoy the extra cushioning.

If red’s your color, you’re in luck. The new Salomon S-Lab Sonics are as flashy as can be, but their pizzazz is warranted–they’re fast.

Salomon is well-known for its special lacing system; however, the S-LAB Sonic use a traditional, classic lace to allow for runners to fit the shoe to their specific needs. In fact, the S-LAB Sonic was designed specifically as an “up-tempo training and racing shoe for the city.” I would agree that these shoes are slanted to the road runner, but I used them for distances under 10 miles and they worked great. In fact, I felt fast. Real fast. Part of this is due to the weight of the shoe (8 oz. for a Men’s standard size 9) but a large part is also because of the material–the entire upper part of the shoes use a very breathable mesh material. I’m hesitant to call these shoes “cushioned” although Salomon does rank them as a 4 of 5 in terms of cushioning because of the EVA (a dense foam) Energy Cell+ cushioning. However, as others have mentioned, these shoes do feel like part of one’s own foot. They’re extremely flexible, which allows for a nimble-footed precision on the trail.

Overall I’m very impressed with these shoes–whereas I long since gave up on Salomons because of their overly stiff midsole and lack of flexibility, these shoes are changing my mind.

I would like to see a shoe with a bit more comfort and toe space to allow for a compromise that could be used during an ultra event. However, as of today these shoes are worth the cost.