Summary: The Salomon S-Lab X-Series is a low volume, lightweight racer and short trainer that’s designed for the road, but performs just as well on most groomed trails. And dang, they’re really, really fast. 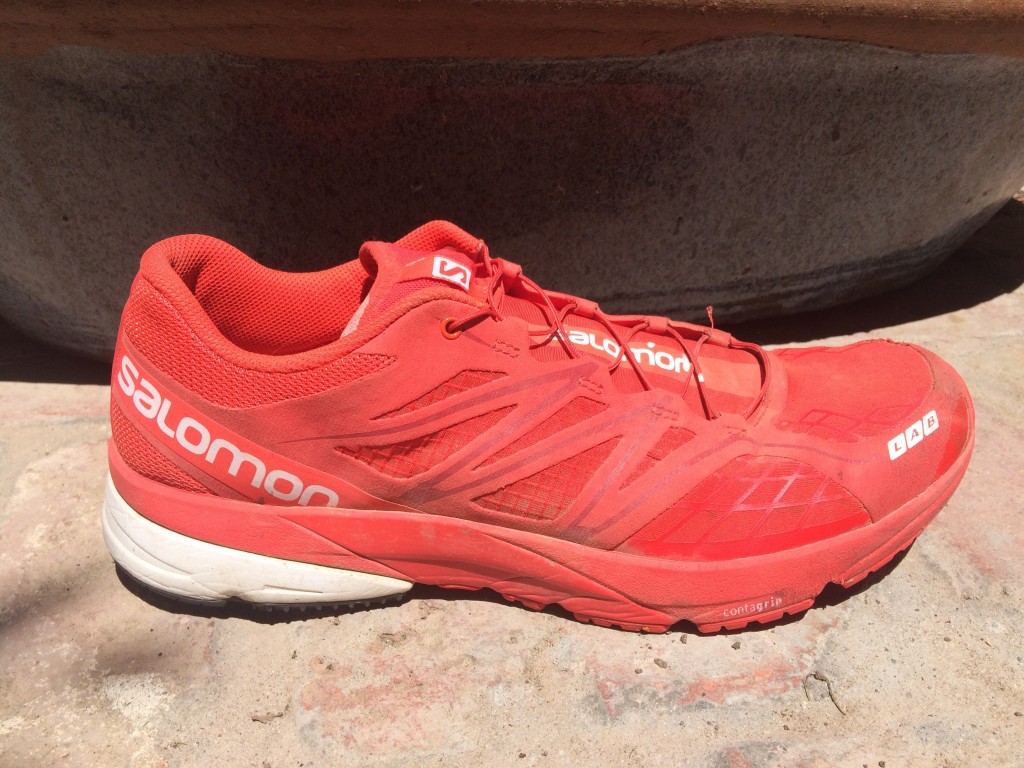 These are the shoes Max King wore to his 2:17 LA Marathon and that I’ve nicknamed my “Red Rockets” on Strava.  They fit tight, they’re bright, they’re not cheap, but if you’re looking for a shoe that’s been meticulously designed to go fast in varied terrain, you’ll want to check these out.

These are essentially a road/hybrid version of the popular Salomon Sense and share some attributes. The X-Series have a softer upper with not as much structure as some Salomons, with a noticeable softer landing than their trail brethren. In their spec sheet, Salomon gives these a maximum 5/5 for cushioning, while, for comparison, the popular S-Lab Sense 4 trail shoe receives a 2/5. Generally a road-based shoe built for speed runs a bit more rigid, but Salomon found a way to break that mold by somehow also allowing a tremendous amount of responsiveness in the same shoe. Well done. 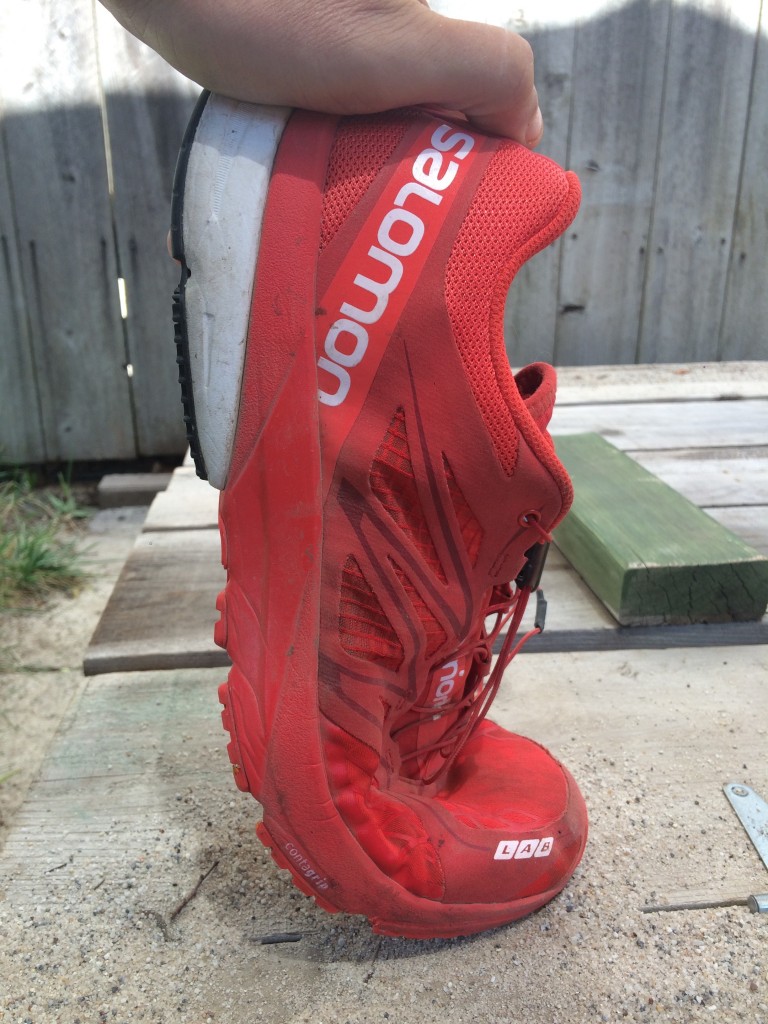 The upper is designed primarily with lycra on the forefoot with some meshy fabric and light structuring on either side of the midfoot. Nothing major, but a definite liability if the shoe gets snagged on an errant branch, as the thin build will likely snag and you’d hate to have these snazzy looking kicks get a blemish like that, right? The ankle collar has a softer, thicker material in its build, but in no way would it be considered bulky.

Quality-wise, I had a problem with most Salomon products over the past few years, but have seen a huge improvement over the past year. The X-Series fall into the “definitely improves” category, as I’m happy to report that after 150 miles, I’ve had no issues with separation, stitching, or logos mysteriously peeling off.

I wear these for short speed work, and have taken them up to 15 miles tempo runs. Max wore them in a marathon, and I wouldn’t hesitate to do the same, possible up to the 4 or 5 hour range.

Like many Salomons, these hold the foot tight and snug. If you’re looking for a shoe that allows toes to splay out widely, look elsewhere. I’ve got a pretty narrow foot, and appreciate the tight comfort the X-Series provide.

Ifyou’ve worn S-Labs in the past, you’re familiar with the “Endofit” construction.  Minimal interior stitching and a fully gusseted tongue make for a very elegant, sock-light feel that minimizes slipping tongues and weird rubbing.  If you haven’t slipped your foot into one of these, I’d highly encourage it.

Boy, bring up lacing systems in a crowded room and you’re likely to get 100 different opinions. I’m a fan of quick laces–be they aftermarket, BOA, or the Quicklace system Salomon uses.  In my years of reviewing and wearing shoes, I’ve found that these system takes about two times each run to get it right. I slip the shoes on, pull the “laces” tight, and head out the door. After a few minutes (after my feet have settled), I’ll stop, bend down, pull them tight again, then they’re solid for the rest of the run. These Salomons have that problem and to be fair, I get the same thing with BOA closures, but that slight disruption is far outweighed by the fact I can cinch down my entire foot with one (fine, two) pulls. 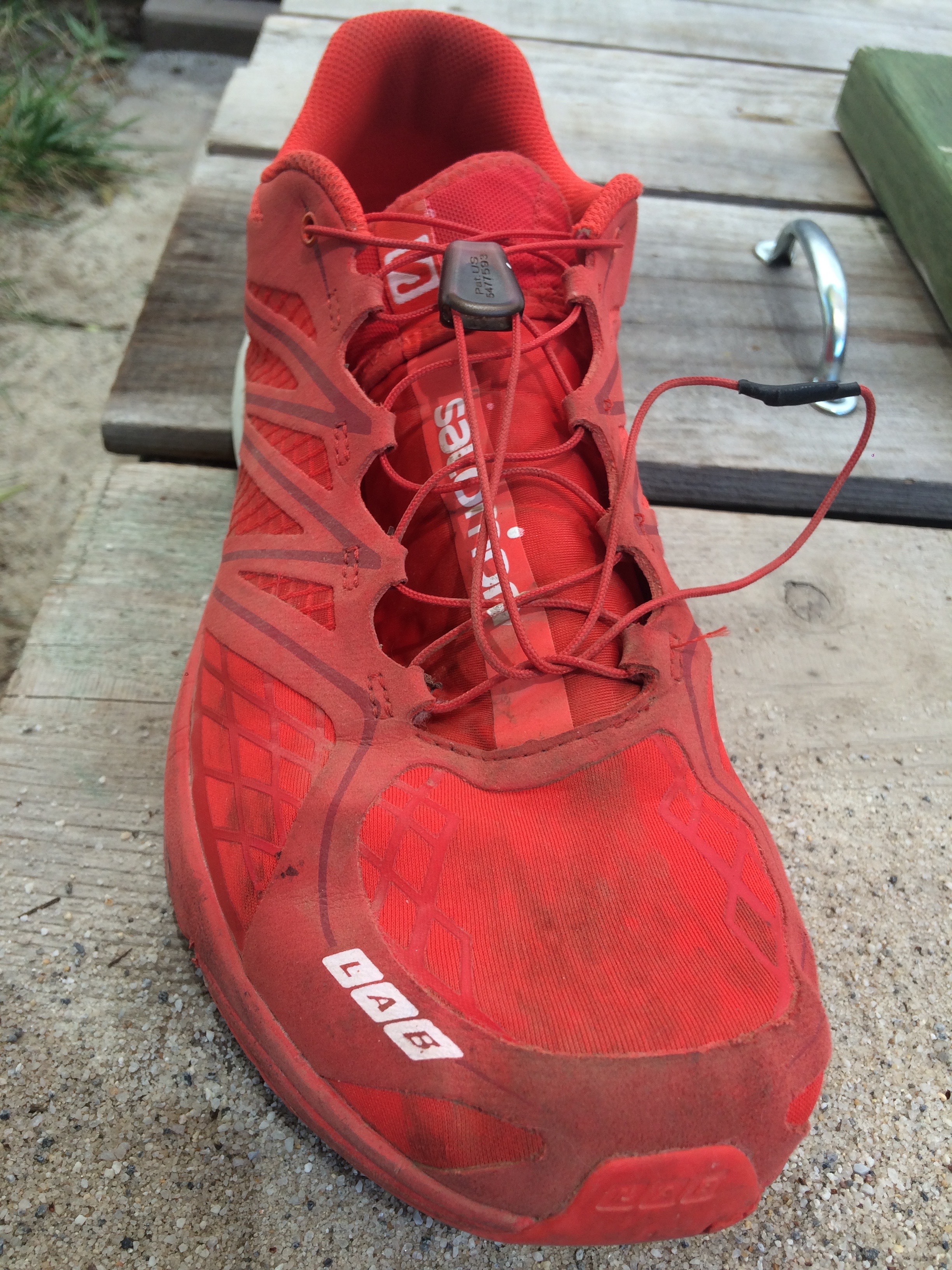 The tongue has a small “pocket” at the top where the laces can be tucked, but most of the time I just pull them tight and loop them under the bottom lace for safe-keeping. Either way works well but the pocket makes ’em look pretty fancy.

The X-Series is widely considered Salomon’s first road shoe, but I’ve found it perfectly capable on light trail.  Using their proprietary “ContaGrip” compound, the soles stay surprisingly useful after the 150+ miles I’ve put on them. There is a channel running lenghtwise that works to reduce weight and most likely provide some additional support. 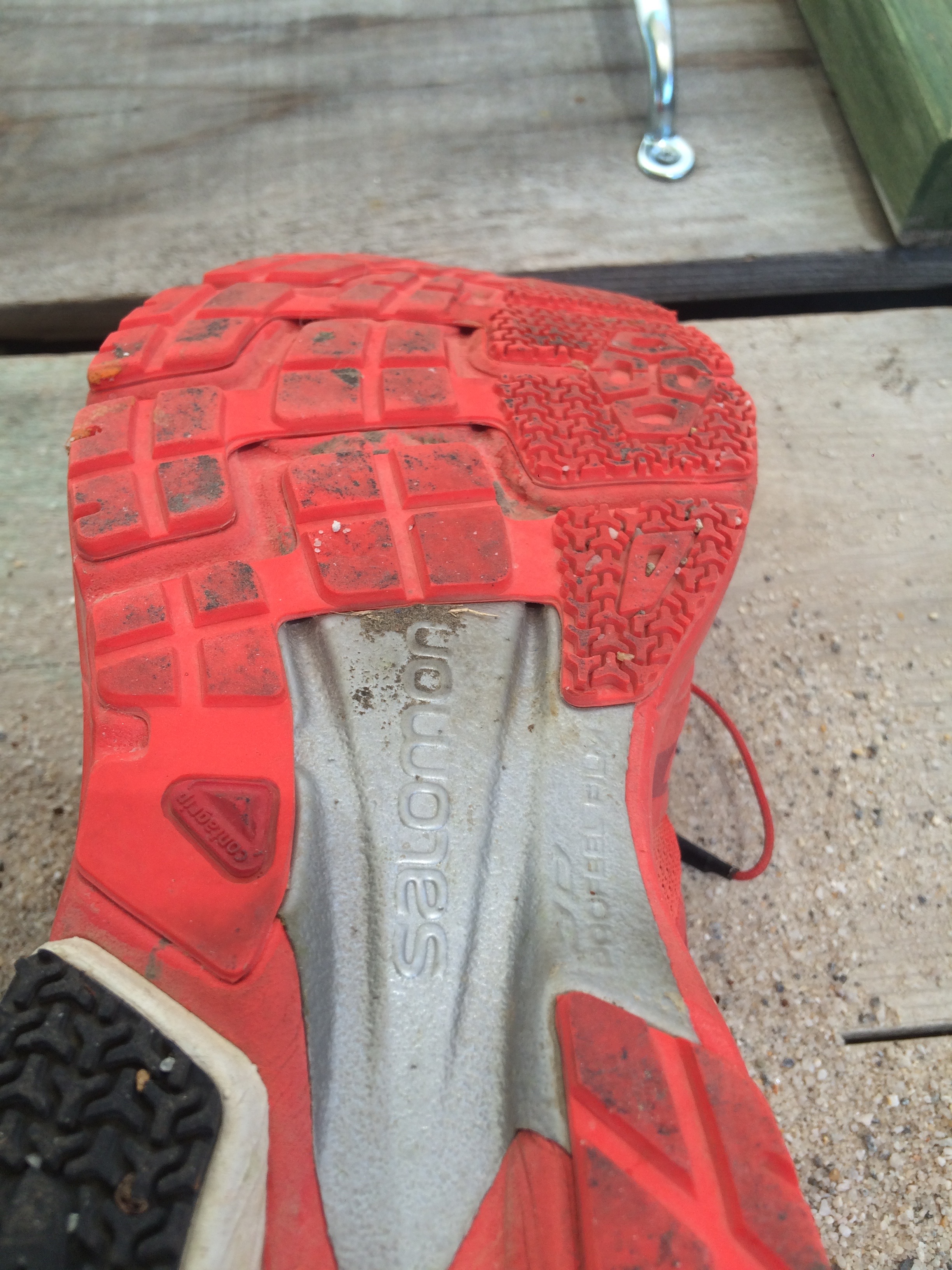 Decomposed granite, groomed singletrack, and gravel are handled easily by the shallow tread, though I wouldn’t recommend wet grass, mud, or severe inclines, as they’re just not ready for that challenge.

My size 12s weigh in a 9.6 oz, which is quite light, but my guess is that next season we see an update to this shoe that’s been pared down even more. 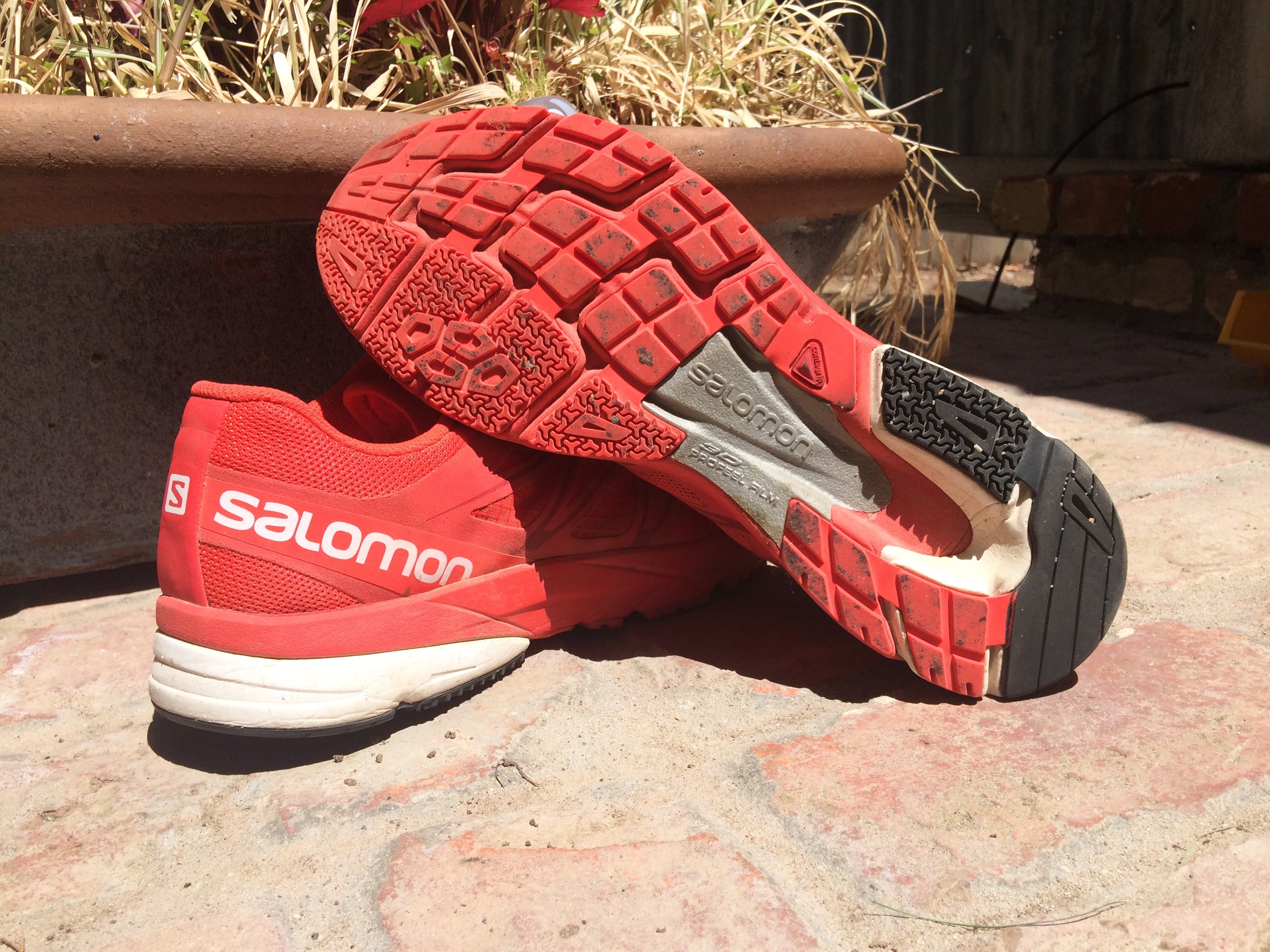 If you’re looking for a lean and mean hybrid shoe with a “normal” drop, soft cushioning, and quality construction, I’d highly recommend checking out the X-Series. These are on my short-list of all-time favorite road/hybrid shoes, and folks, I’ve worn a lot of shoes.  Now, if only they’d re-brand them so I don’t get tongue-twisted when I say “Salomon X-Lab S-Series” they’d be near perfect.

Disclaimer: These shoes were provided to me for trial purposes. Like most products I receive, I use them for a trial period then donate them to either friends or charity. 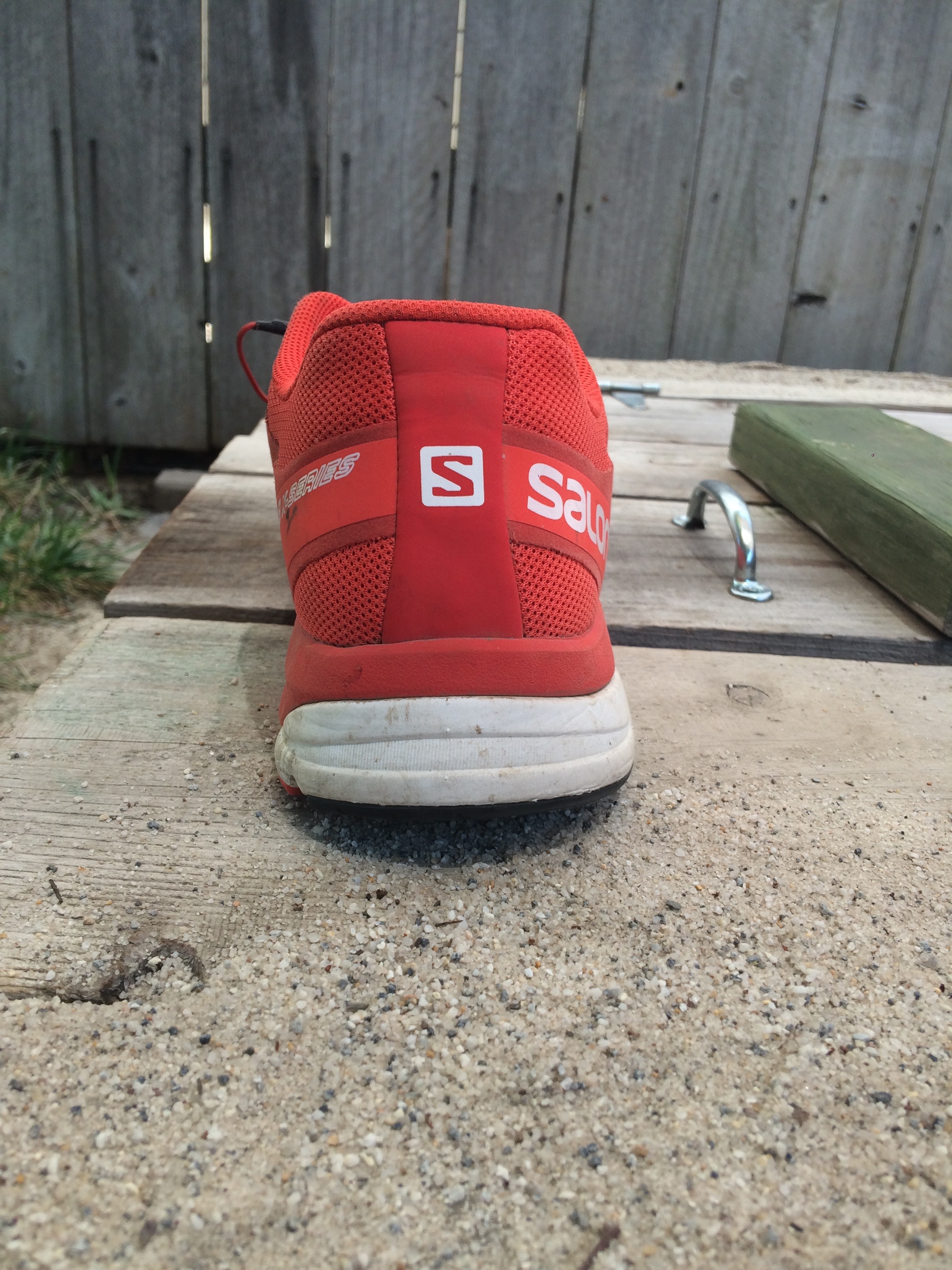