On my quest to reduce running “stuff” to a minimum, I ran across this new water bottle from 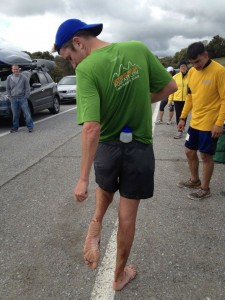 Simple Hydration.  I’ll admit, what initially drew my eye to it was curiosity. Is this the bottle Anton has tucked into his shorts? I’ve wondered how he carried it without popping out and thought this might be it. That question I still don’t know the answer to, but I do know that I’ve run with this bottle every day for a month and have not used anything else.

Update: After looking at a bunch of pics, yep, that is a set of Simple bottles that Jurek is handing to Anton in the 2012 Leadville (pic below). 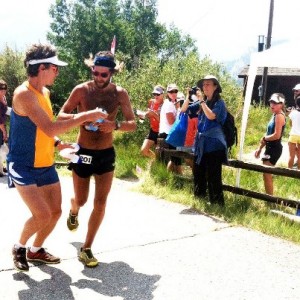 I now run with nothing in my hands and nothing strapped to my waist.

First, it’s on the smaller side at 13oz, so it won’t be the right option for a 40 mile backwoods jaunt.  Most of my runs are either on paths with drinking fountains or trails where I can either stash water or fill up from a stream.  I could see carrying a handheld with water, and having this bottle tucked away with some electrolytes for longer stuff. For races with frequent aid stations, this thing is perfect. 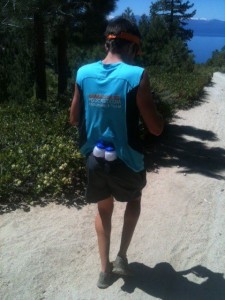 A little about the bottle itself. It’s rather flat, but has got a “hook” molded from plastic near the top that prevents the bottle from slipping into the running shorts. There’s a bit of texture on it as well to prevent side slippage, all of works perfectly.  Once you tuck it in (remember to wear shorts with draw strings!) it doesn’t go anywhere. After 5 minutes, the thing disappears but is right there when you need it.

As for the nipple, I would have preferred more of an Ultimate-Direction type nipple to the pull-with-your-teeth valve, but that’s a minor complaint that will hopefully be remedied in the future.  My fear is that I won’t close the top all the way and I’d drench my backside with sports 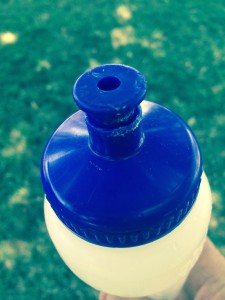 One thing I had to get used to was the cold. It’s sitting in a warm spot, so it’s best to fill the bottle up with ice and water, and when placed against the skin…yowee!…it’s cold.  In the spring and summer, I can see really appreciating this air conditioning system, but in the cold, brrrrrrrrr.  Minor complaint, I know.

Finally, what a great story.  The bottle was invented by a guy from the Midwest who was out on a training run/ride and thought “wouldn’t it be neat if someone invented a bottle that…”, went home, got funding from a Kickstarter campaign, and now has a great product that…wait for 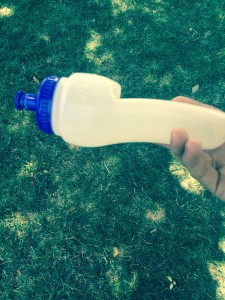 it…is made in the US with no BPA’s.   Wow! The bottle is available from the website for $20, and hopefully, from some more stores in the future.   Check it out folks.

Full disclosure: Simple provided a bottle to me for review. Though I’ve appeared in an ad for the company, no money or additional gear has changed hands.