On my normal morning runs, I run with an adjustable torch on my head, but on single track night runs or races, I prefer to use a secondary lamp attached to my waist or chest. Using another light gives me the necessary depth perception, and as a secondary reason when I race, I like the feeling of having an “extra” light, just in case something goes awry with the first.

My secondary light has always been a cheap little Black Diamond I picked up years ago. Unfortunately, it stopped working the day of a technical night run, which unwillingly pushed me into the market faster than I wanted.

My needs for this light were simple:

I looked at few Petzls and Black Diamonds, but wound up buying the “Snow Miner” from Snow Peak, a company I hadn’t heard of.  What follows are the details on the lamp, as well as my rationale. 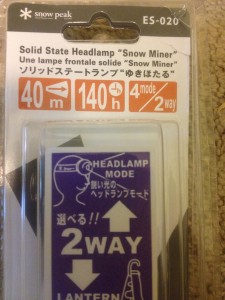 The light certainly doesn’t resemble other headlamps I’ve used in the past. It got some strange looks when I put it on  (in the daylight before the run) from my running group, as it’s a large, opaque half-egg with a nipple-like light on the front.

This thing surprised me! Combined with my headlamp (set on a low setting), and this light on diffused (dome out), I had the perfect amount of light well past midnight.  Not too much to distract my fellow runners, but a nice diffused glow around me that allowed me to see rocks, roots, and bumps.

Another nice quality about it is that since the light is diffused, there’s no “bounce.”  It gets a bit nutty after a few hours of having your light bounce in front of you, and at least for me, my eyes and head start to feel it.  This light was great in that regard.

Here’s a video from the manufacturer:

I tried running with just the diffused light and it did fine on more groomed sections of trail, but on technical parts, I opted for both lamps. Last thing I need is to wipe out two weeks before a hundred!

$55 at REI, which means it can be found cheaper anywhere in the world.  The packaging does look a bit strange…more South Korean electronic swap meet than outdoor store.  This product was not supplied to me my the manufacturer. I purchased it with my own funds.

How long does it last?

With the cheap-o off brand batteries it came with, this thing has maintained a strong light for 30+ hours.  They claim it’ll run for 55+ on HIGH(!), but we’ll see. I’ve kept records of when it’s on and off, and have left it sitting in my kitchen in the high position while I cook.  Pretty impressive that it’s still got a quality glow….not just a pathetic trickle of light.  I’m confident that with a new set of 3AAA Lithium, it’ll take me through the night with no problem.

This is a solid little piece of gear. Looks like it was designed by Apple and operates in the same intuitive fashion. There have been ZERO quality issues with the button, the lamp, or the adhesives.  Spelunking around the web, I find that Snow Peak is a highly regarded brand in the backpacker and hiking crowd.

I’d highly recommend this is a secondary lamp and would definitely purchase one again.  My only concern is the hard plastic on the base doesn’t have much give, and I fear snapping a section of it when squeezing it on to my vest.  If you’re using it with the existing strap, that won’t be a problem.

This is already in my gear bag, ready to get me through the technical stairs in the Marin Headlands.