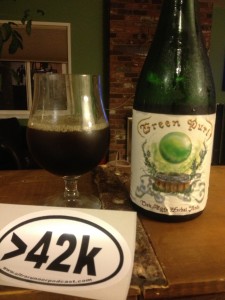 Step right up exotic beer drinkers, this one’s a doozy.  I stopped by one of my favorite small breweries on my way home from Russian River and picked up a few special bottles. This bottle (750mL for $17) is labeled an”Oak Aged Herbal Tonic” which sounds like something a college kid might be selling at the Renaissance Faire, but it turned out to be one of the more interesting brews I’ve ever tasted.

A Puri style Gruitt (I’m no expert, I’m just reading from the bottle), is an old world style made in times before hops were considered the best bittering ingredient.  The brewer at SS added some hops, but the main ingredient is wormwood, an ingredient also used in Absinthe.  There are six other herbs and roots used in the brew which give off flavors of orange peel, juniper, licorice, “wood”, and most surprisingly, Dr. Pepper. The Dr. Pepper was a lot more prevalent when I had this on tap than in the bottle, but it’s still certainly there.

Out of the bottle, it pours a very dirty and cloudy brown with very little head. Some lacing existed, but this was largely a flat beer, and for some reason, that seemed appropriate.  The smell was dark plum and oaky wood.

For drinkers familiar with sours, this is in the same wheelhouse.  There are strong sour notes with bitter overtones, but this Gruitt lacks a big mouthfeel. Sour grapes and prunes were apparent flavors, and strangely, 3 minutes after finishing the bottle (8.3% ABV…burp!), my mouth tasted like I’d just drank a bottle of purple grape juice.  Don’t let that fool you…this isn’t a sweet brew at all, which made that all the more interesting.

This was my first time with a Gruitt (or is it a Puri? I dunno) and it certainly won’t be my last.  I loved it. My wife thought it tasted like “other sours” and the girl sitting next to me at the brewery hated it.