It’s big, roomy, and has a pressurized hydration system for cooling and cleaning…the Spartan Ultra Pack built by Geigerrig is made for “hiking, sport endurance, trail running and obstacle racing events” and since it’s called the “ultra pack”, it’s fair to review it for ultra trail runners, right?
First, we’ll look at the pack’s main feature — the pressurized hydration system.  There is a 70oz/2L bladder which sits nicely in its own pouch within the zipper compartment of the rear of the pack.  Also within this compartment, there is a large plastic board which presses smoothly between the bladder and the runner’s back.  Although the board is removable, it’s essential to reinforce the form of the pack when the bladder becomes pressurized. 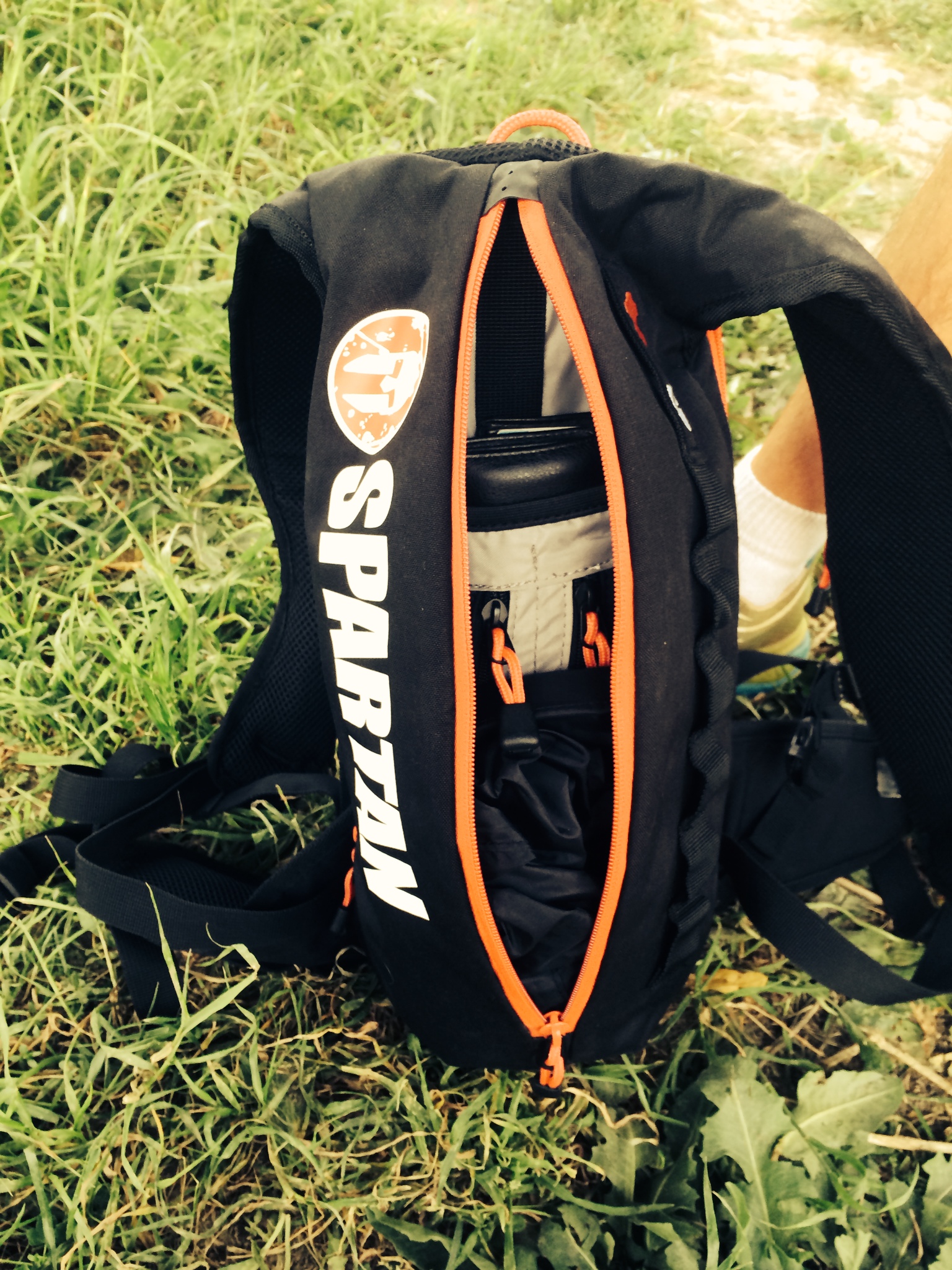 To pressurize the bladder, simply use the pump located inside the zipper compartment of the left arm strap.  Once the air pressurizes the bladder, use the drinking hose which you can bite or pinch between your fingers.  The water shoots from the hose which can be used to cool off your body, clean dirt off, or share water with another runner.  The drinking hose can be concealed and stored within its own zipper compartment on the right arm strap. 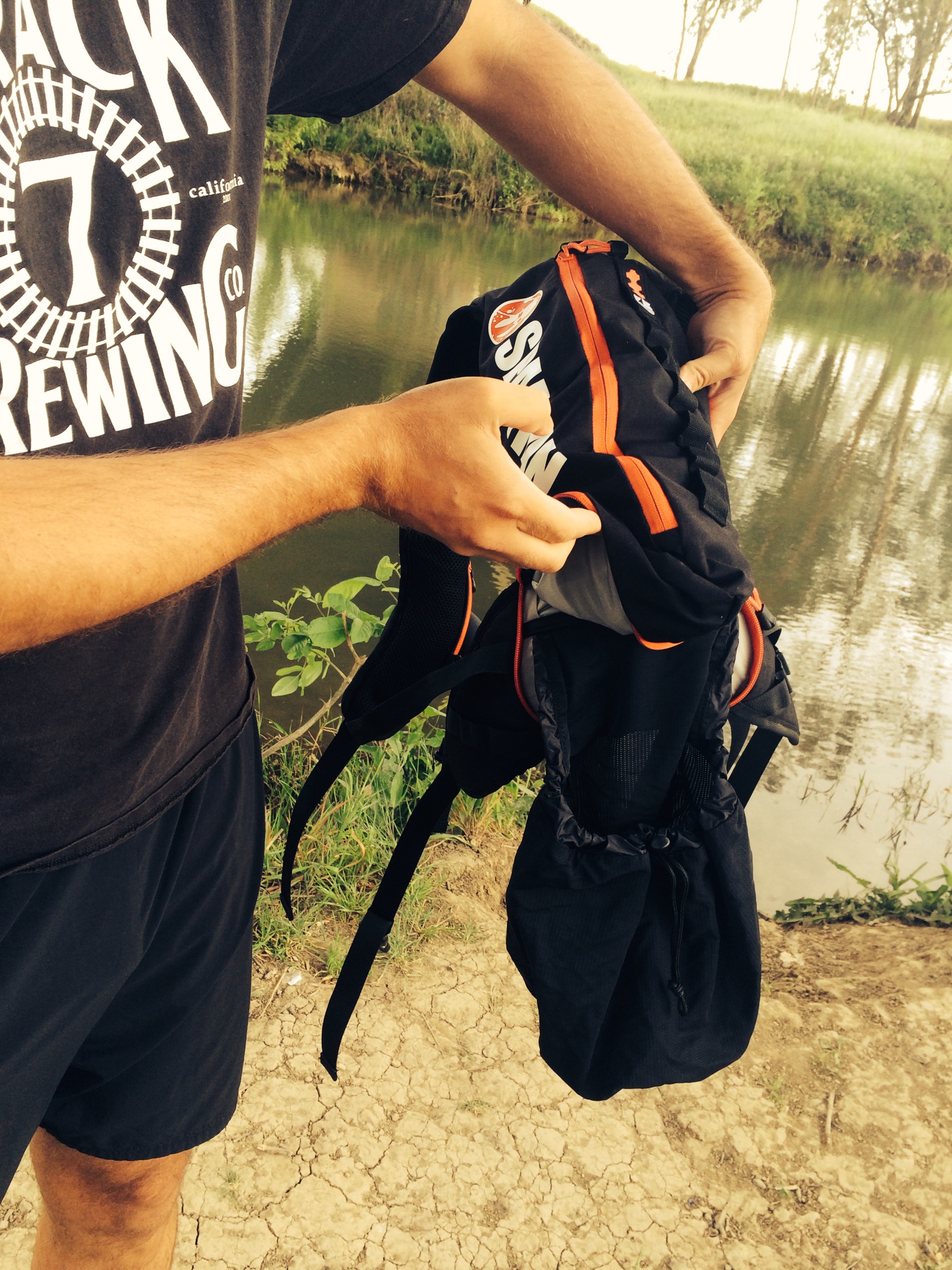 Taking a look at storage, it has a large zipper compartment on the outer side of the pack.  Inside: there is a large pouch to place items such as food or flashlights/headlamps.  On the wall of the pouch, there are two separate, smaller zipper areas to place valuables (keys, money, phone).  This compartment is large enough to carry a light jacket, but if you still need more capacity there is a large bag that can carry an entire change of clothes or shoes which is able to snap on to the vest. 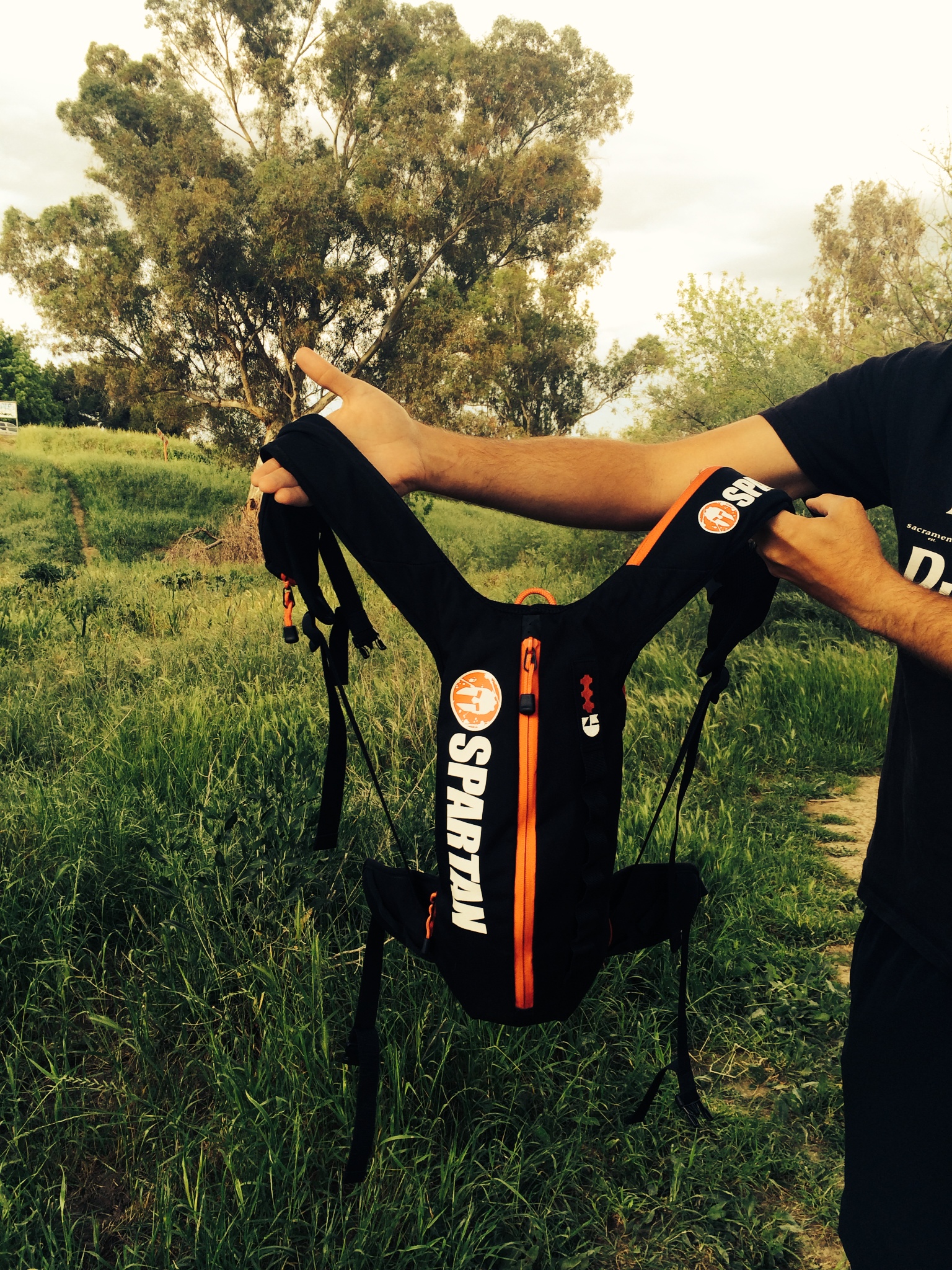 There is another storage compartment located in the bottom of the pack called the interior dry bag.  Once you open the bottom, a mesh bag drops out in which you can store wet or soiled clothing or whatever else you choose.
The outer shell of the pack is made of 500D Cordura Nylon known for its durability and resistance to tears and abrasions. 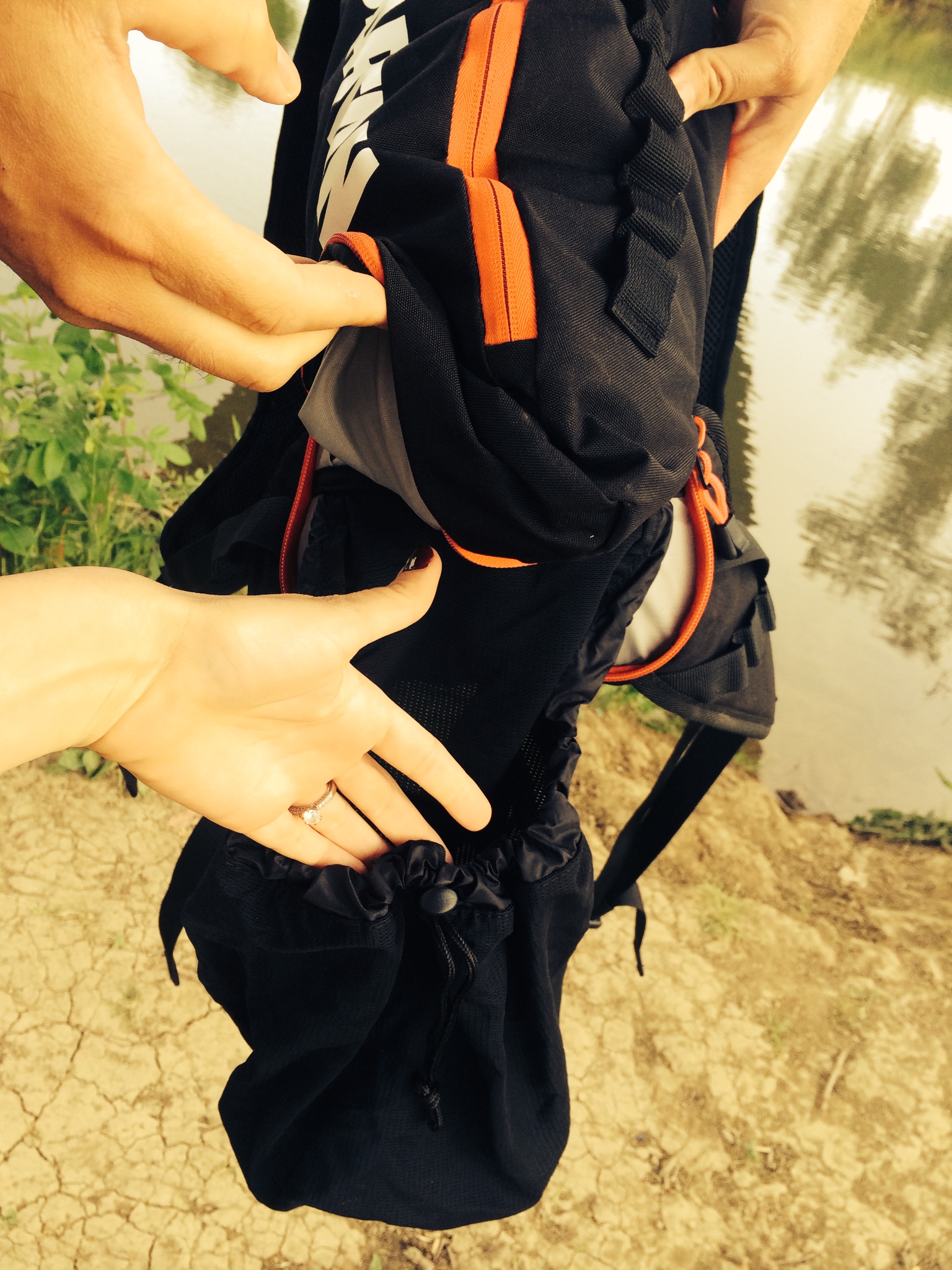 The back fits well on one’s back.  There are two buckle straps, one that snaps at the chest and one that snaps over the gut.  The combination of the two straps keeps the pack firmly on your body and disperses the weight of the pack well.
This past Saturday, I decided to put the Spartan pack to the test of ultrarunning at the American River 50 Mile Endurance Run.  Pre-race, I liked how much room there was to put as much nutrition as I wanted.  Since I hardly ever use a hydration pack on my runs, I liked how the drinking hose was concealed in its own zipper area and not bouncing around near my shoulder or neck area.  I really liked the two smaller zipper areas inside the larger storage area to put my phone, keys, and other valuables.  I felt at peace knowing these items were secure since they where protected under a fail-safe of two zippers. 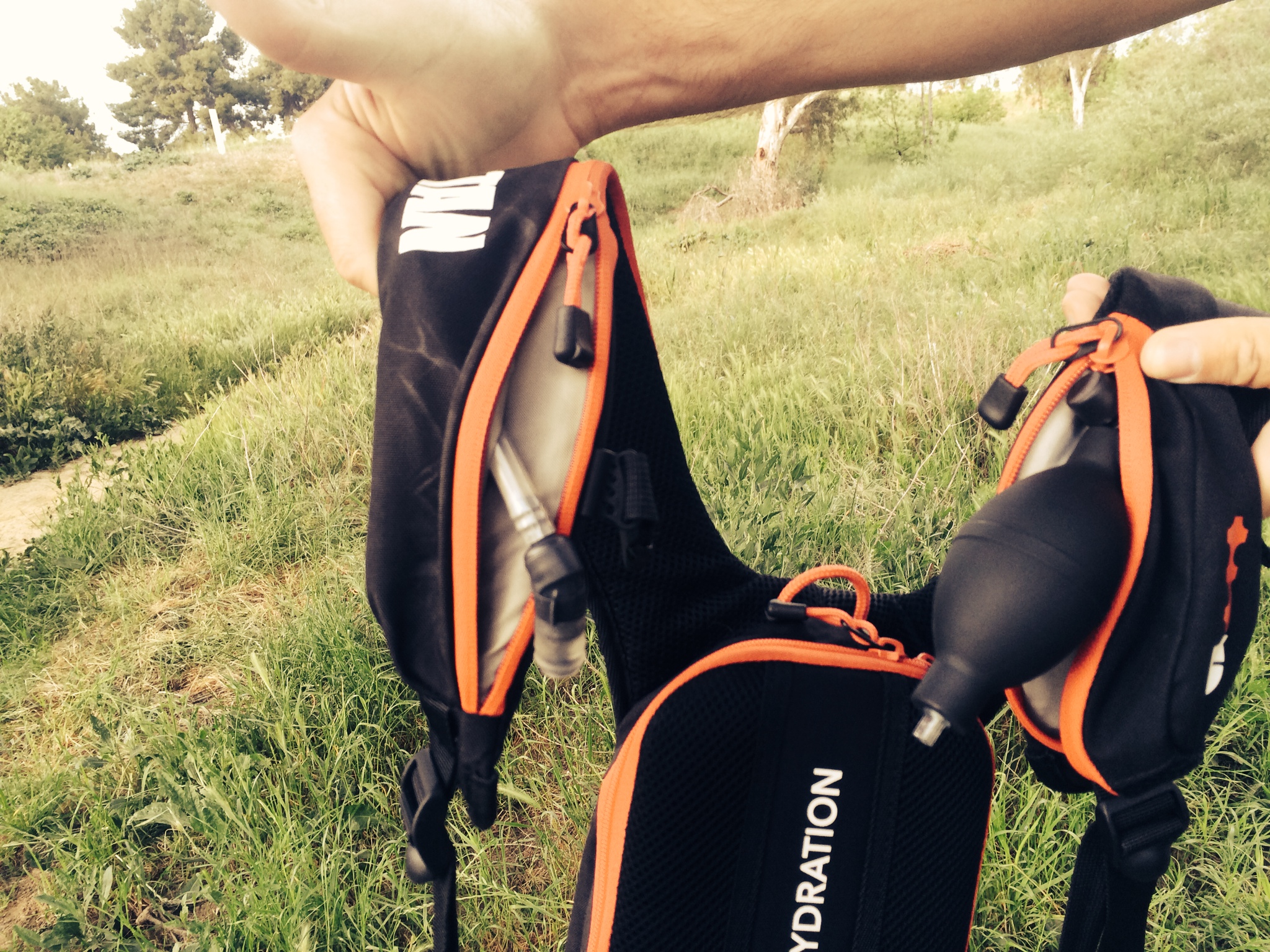 Once I put the pack on, it formed to my body well.  I liked the second buckle strap which snapped over the stomach area and it made the pack feel stable.  It felt comfortable, but was much heavier than what I was used to.  With a full bladder of water and my gear, it weighed nine pounds. 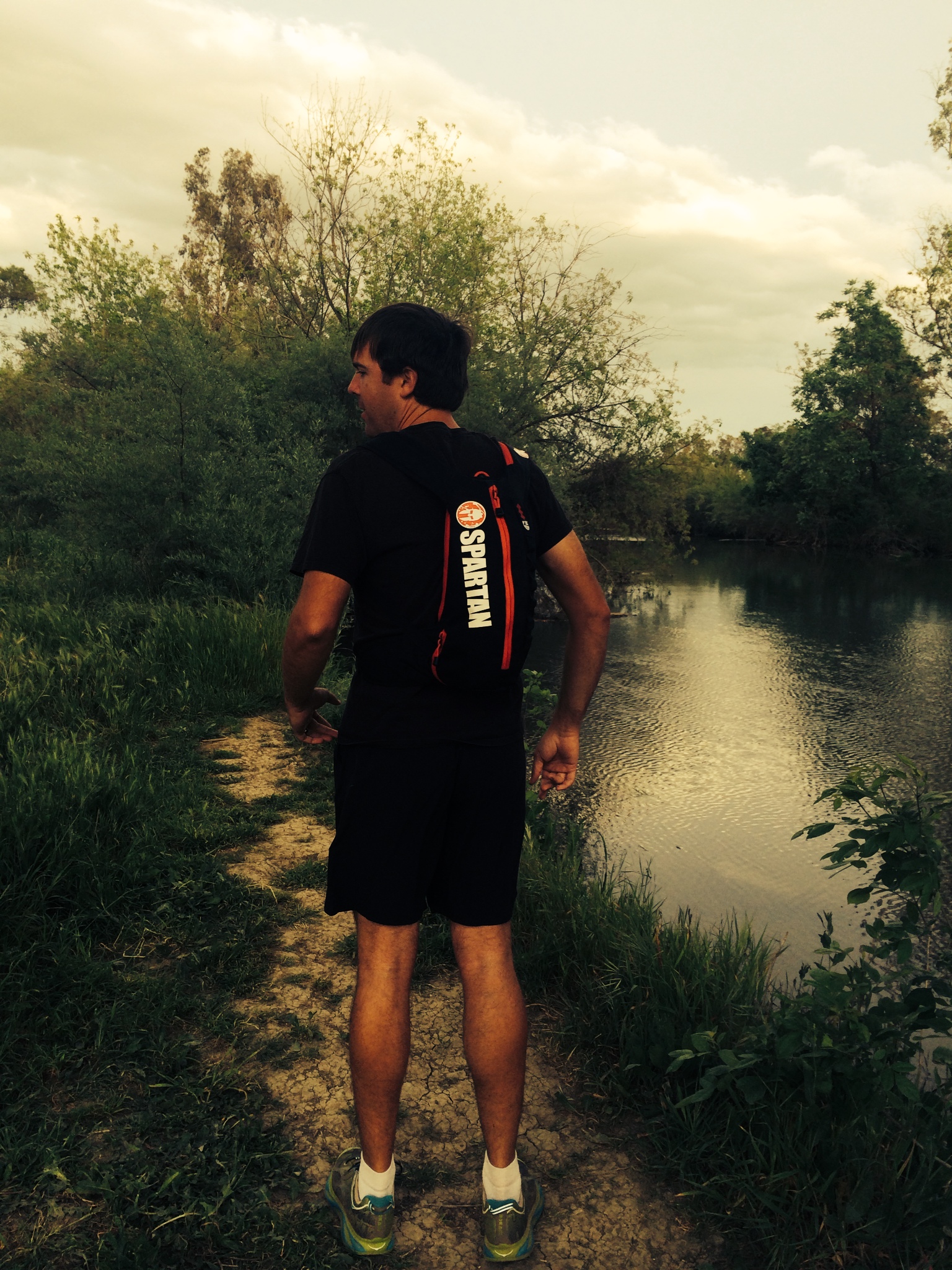 During the run, I felt smothered by the way it clung to my body.  I didn’t find much use for the pressurized hydration system other than to fill a thirsty runner’s bottle on an 8.7 mile stretch without an aid station.  It felt heavy up until mile 40 when I decided to dump the water out since it was only causing me pain from the weight.  I didn’t like the lack of accessibility to my nutrition.  There were no pockets or pouches on the front of the pack, so I would have to take it off just to grab a GU.
I think it would be good for hiking or a Spartan Race, but not ultras.
You can find it at the Spartan online store: shop.spartan.com for $129.00.
Thanks to Martin Sengo for his  thorough review. The pack was provided to URP and Martin for testing purposes. All words are his own. Video produced by URP.