I asked three runners to give the new The North Face Ultra TRII and the Ultra Cardiac a solid month of running and report back with what they found.

Adam runs competitively and generally hits about 40 miles each week on his feet.  For the trails he wears Brooks Cascadias or Hoka One One Stinsons. He said “the two North Face shoes Eric had me review are way outside of my normal comfort zone. I do have to say that stepping outside of your comfort zone is a good thing.  I love The North Face for all of my winter time and alpine skiing clothing and my very first Christmas present from the girl who became my wife was a TNF fleece 12 years ago that I still wear. They make super durable clothing that performs incredibly well.”

Christa is a runner in southern California who spends most of her time on the roads or decompose granite but has recently been running the trails near her house.  This is her first pair of trail shoes, though she’s been running trails and ultras for over eight years.

Ann is a runner with feet that are tough to fit and is only able to wear shoes with little support.  “My ankles and arches are really screwed up so I usually wear shoes like Skoras that let my feet do their own thing.  (The North Face Ultra TR IIs were)  fine looking, but I realized how nice they felt and they worked with my feet well. Now I wear them to work and also any time I hit the trails.” 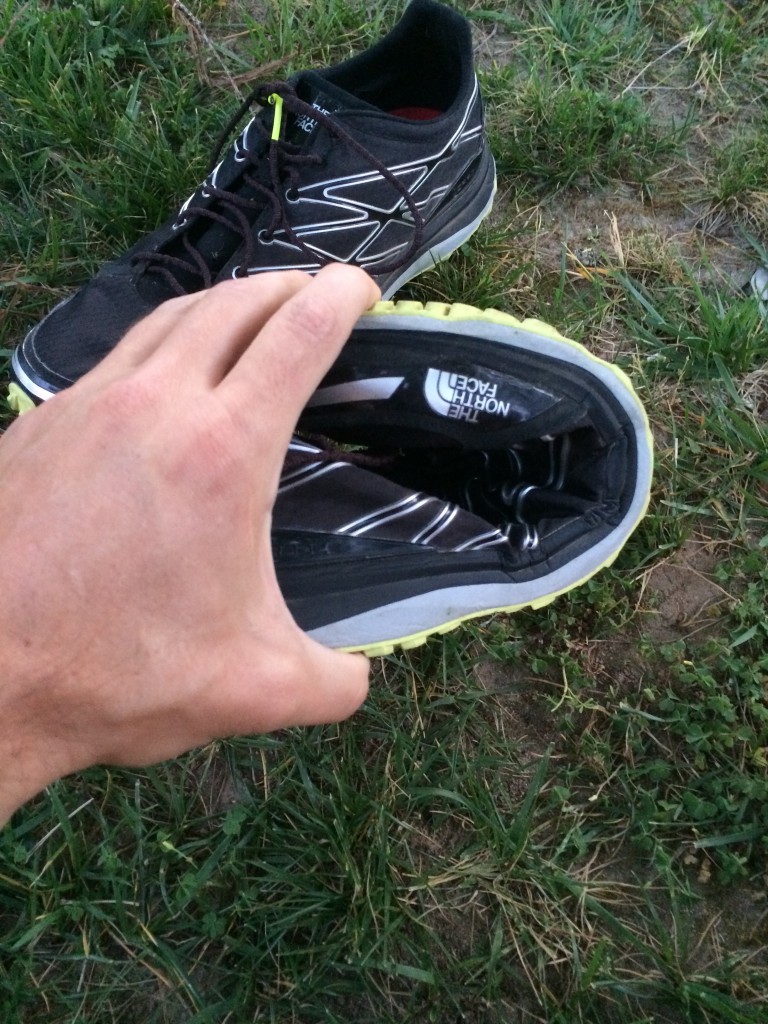 The TRIIs have an 8mm drop and as Adam pointed out, “you can fold the shoe in half with almost no effort at all. I was surprised with that when I ran, it still had a good amount of nubby grippieness that you’d expect out a good trail shoe.”

Ann took hers out in the mud a few times and noted that mud and grit didn’t stick to the upper, allowing them to stay cute looking after a tough run.

Adam: “The upper is very lightweight breathable material, made out of what The North Face describes as a “ripstop tent material.” I’m not sure what the exact material is, but it seems to be something that would shed water and moisture quickly. Unfortunately I live in an extremely arid part of the country know as California so I didn’t have a chance to get the shoes muddy and wet. 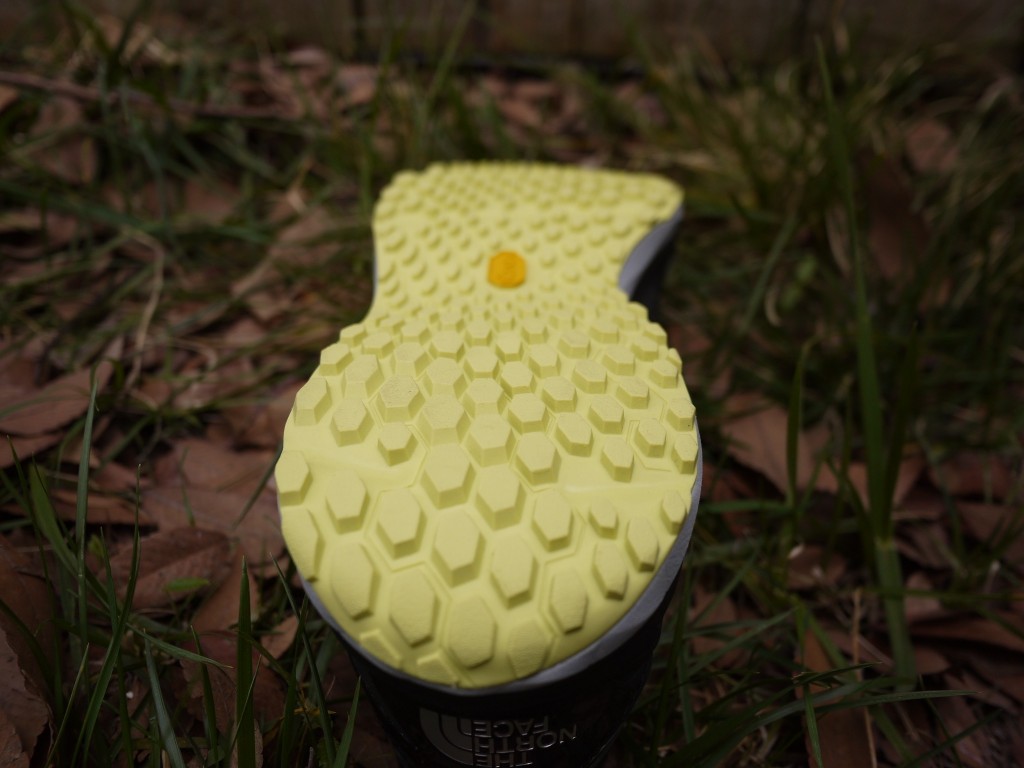 Adam: “My first impressions of the Men’s Ultra TR II were that it looked like almost like a road/track shoe. This shoe is uber lightweight, weighing in at 8.1 oz. It very much is a minimal shoe with almost no cushion. TNF’s website describes these as a “cross country spike inspired trail shoe. My opinion of overall fit of the Ultra TRII is that they have a fairly narrow fit with out being too snug on my feet. The toe box is nice and wide, and my little piggies have enough room to be happy. The collar and tongue have little to no padding. I did have to make sure that wore some kind of sock that came above the collar. My first run out my ankle socks slipped under the collar and it didn’t take long for me to feel it.

Ann added that she appreciates the lack of support and likes how there’s a light “frame” to the shoe, but that it’s lightweight and non-obtrusive.  Her Ultra TR IIs fit true to size. “The tongue has no padding or cushion to it, but I always wear socks so it’s not a big deal. I’d prefer a light collar and tongue to a bunch of padding anyways.”

All three reviewers gushed about something seemingly minor…the laces on both models.

Adam said “I know it’s something that most people wouldn’t care about, but the laces that came with the Men’s Ultra TR II are really cool. They’re shaped like a crinkle cut french fry. The crinkles really keep the knot in place and once tied the knot did not slip, move slide around AT ALL. I really liked these laces; yeah I know I’m a dork.”

And Ann agreed, “For whatever reason my laces usually come undone, but with these shoes I tie them once and they stay secure.”

Adam: “These shoes tear it up where I spend a good amount of my time running mid-week; decomposed granite on the side of the bike trail. If you like to feel the exact contour of the dirt and rocks underfoot then this is the perfect shoe for you. They had enough traction that I didn’t slip at all when heading up some fairly steep hills and when running downhill I was able to push it as the Vibram sole felt almost sticky on the downs. I was able to feel almost every small cobble and root underfoot. I do prefer something with a little more cush, and don’t think my feet, hips and body would be very happy with me if I took these out for a 25 mile trail run.”

Ann: “I can’t see myself running more than a few hours in these, but I don’t know, I wear them at work for 10 hours and they’re great.  These are definitely fast and they feel like racing flats.  I run a lot of groomed trails and DG and these shoes allow/force you to feel every single rock out there. A light rock guard would be nice, but I wouldn’t want it to jeopardize the weight and flexibility.  Another thing I really liked is the rocker-ish heel. I’m a heel striker and it helped me land soft and quiet.” 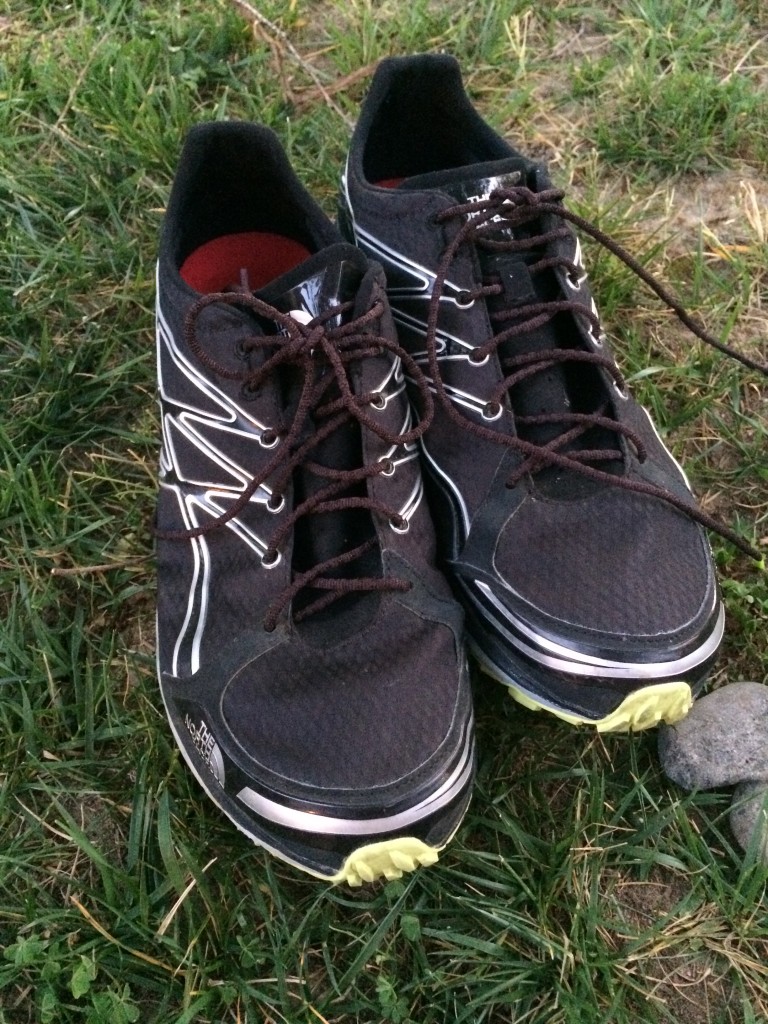 Adam: “They did take me outside of my comfort zone of my normal cushioned shoe and I look forward to logging more miles in them, but probably not more than 5-10 miles at a time.”

Ann: “I love these shoes. Even when I’m not running in them, they’re comfortable to wear around town and it’s really nice to have shoes that work with my funky feet.”

I asked Adam to review the Cardiacs as well, while Christa spent a few months with the female model. Again, this was her first pair of “real” trail shoes, though she’s been running trails (and ultras) for over eight years.

Adam: “These are another lightweight shoe with an 8mm drop. These felt more like a regular trail shoe, but still weighed in at low 9.7 oz. This shoe seemed to fit pretty darn narrow and I did have to lace up fairly lose with them. Not a bad thing, I just had to remember not to crank down too tight when lacing up. The toe box was big enough that my toes had plenty of room when tied loose for such a narrow shoe. Although much narrower and with less cushion than I normally run in I wouldn’t hesitate to take these out on a long trail run right out of the box. My first run with these was at lunch on a trail that turned into a dry riverbed. Although on fairly large river rocks I felt like they had enough cushion.” 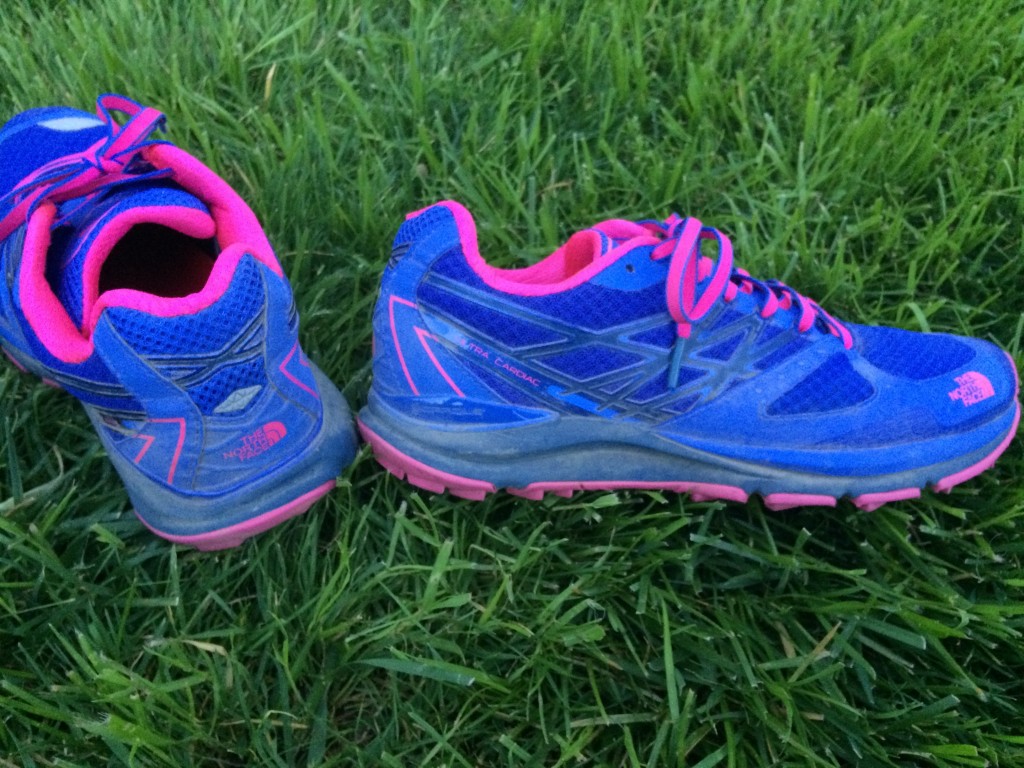 Chrissa: “Lots of great cushion. I love the arch support and the roomy toe box.  After about five miles though I got a hot spot, I stopped my run, and I didn’t have the problem again.”

Adam: “The soles of the Ultra Cardiac are also made by Vibram, but weren’t as flexible as the Ultra TRII.

They felt much more like a normal trail shoe on the minimal side of spectrum. The Ultra Cardiac has a stiffer sole and more aggressive tread than the Ultra TR II.

The tread is pretty amazing, although not running I was carrying my toddler on a fairly steep dirt trail and these shoes didn’t slip slide at all. While on the hills, they gripped the trails very well.” 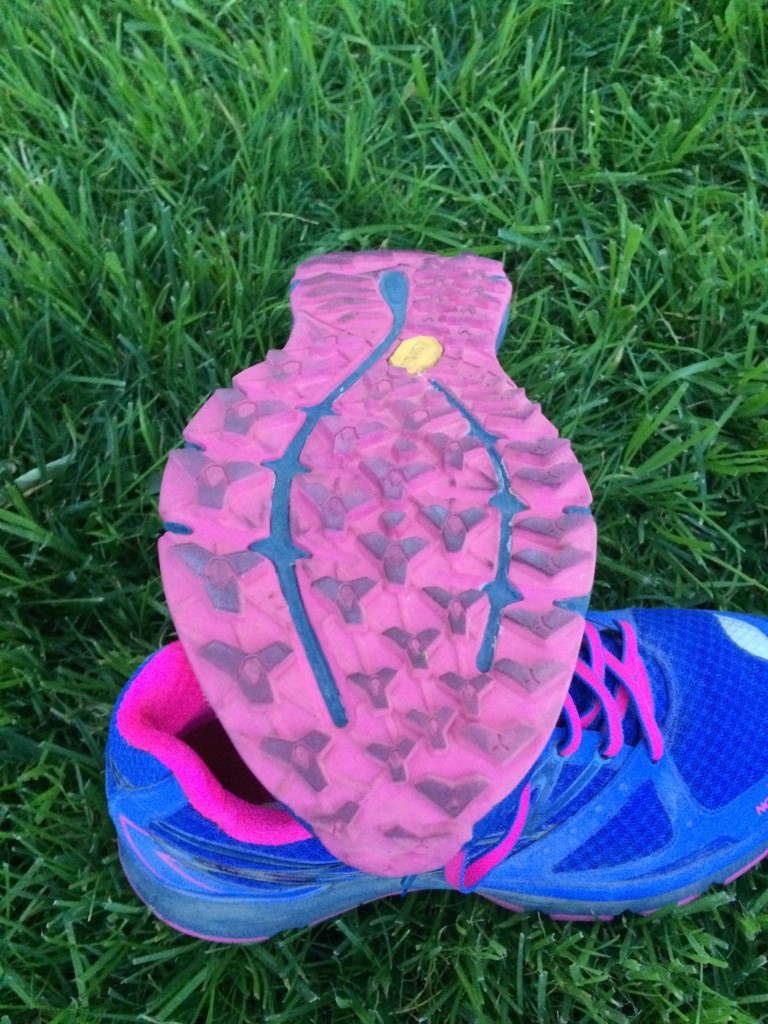 Chrissa: “I went on a great two hour run trail run with them and these gave me great grip and traction on my way up and especially back down the mountain.”

Adam points out that these differ from the TR IIs in that the tongue and collar have ample padding that “keep his feet happy.” 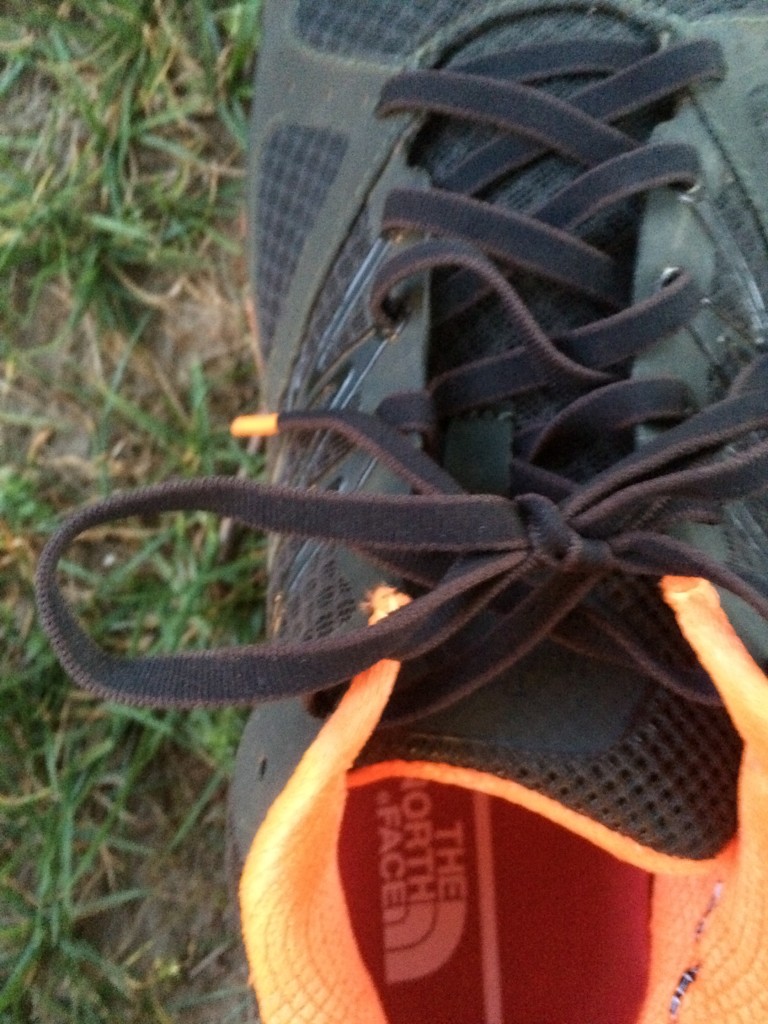 Funny, both Adam and Chrissa had great things to say about the laces.

Adam: “The Ultra Cardiac didn’t come with the crinkle cut french fry laces, but came with flat ribbon like laces with almost like a micro ribbing on them. That’s a long way of saying that they stayed tied tight and I did like these laces too.”

In addition to hitting the trails, Chrissa has been wearing her Cardiacs on her bike and “loves the fact that the laces are short and didn’t get caught up in the chain.”

Disclaimer: All shoes were provided to URP by The North Face for testing purposes. All words are solely written or spoken by the reviewers. Pics by reviewers and URP.