I’ll just get it out of the way up front: I’ve never been a fan of TheNorthFace shoes. I tried them for the first time a few years ago and was severely underwhelmed.  I gave them a second chance when I bought the Hayasa a few years ago, only to return them the very same day. They were stiff, heavy, and made me feel slow.

With that said, I was skeptical of their upcoming shoe, but figured I’d give the Ultra Trail a try.

Note: After a meeting with their shoe designer, I learned that the company has re-organized the make up of the departments, and shoes now have their own design team. They admit that TNF shoes have not had the focus that their clothing and gear have enjoyed and that all changed in 2013. No longer are they “just making short boots”, but they’re taking input from actual runners and focusing on light and fast trail racers. 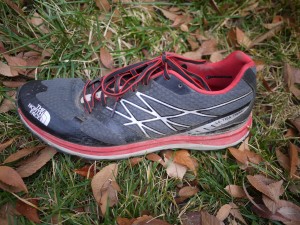 First thing I do with a new shoe is pick it up and twist it around. How flexible is it, what’s the tread like, how does it feel in my hands, and what does it weigh. These are all important aspects to me, and this shoe felt great.

The shoe also reminded me of other hybrid trail shoes (Scott Kinabalu T2 and Montrail Rogue Fly), both shoes I really liked.

The Ultra Trail has a 16mm heel stack and an 8mm forefoot, allowing for an 8mm drop. 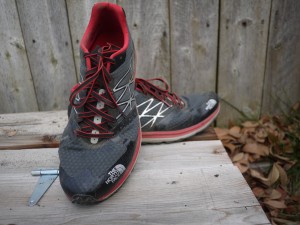 MSRP is $110 and will be available at the end of this month.

I’ve been wear testing these since early December and have put just over 100 miles on them over a mix of groomed trail, gravel, asphalt, and wet, early morning single track.

I’ve got a slightly narrow foot, but other than that, it’s pretty basic.  These felt great wearing around my house, but I resisted wearing them at TNF Endurace Challenge in early December, as I was still weary of the brand (for shoes) after my last debacle.  Turns out, they would have been a great option.

The Ultra Trail fits slightly snug around the forefoot (just as I like it), but allows for the foot to 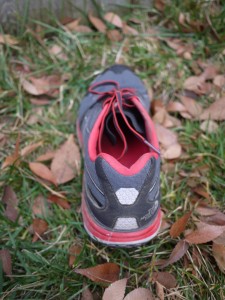 land and spread in the toe box. Not a lot, but enough for me. It’s a very natural feel that doesn’t rub, bother my arch, or squeeze my toes. I immediately felt comfortable in the shoe.

My heel was secure and didn’t slide around at all on ascents, descents, over technical terrain, or during speed work on the gravel levees around my house.

The upper is breathable and lightweight and has just enough cushioning around the ankle.

Another aspect I appreciate about the fit seems minor, but it matters. I’m a sucker for flat laces, and the Ultra Trail comes ready to run with flat laces that won’t bother the top of my foot when the hours wear on.

This is a very natural, comfortable feeling shoe. Neither heavy nor rigid, this just feels good.

There’s enough ground feel to make me feel fast, and just enough cushioning to protect my 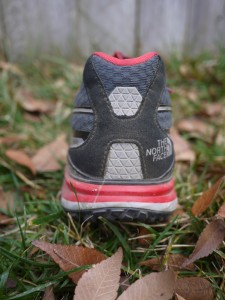 Though it doesn’t feature a gussetted tongue (something I wish all shoes did), the tongue is thin and supple and doesn’t slip around at all.  As mentioned above, the flat laces keep the shoe tight without digging into the top of the foot.

The shoe features a FlashDry upper, which allows dampness to slip off the shoe immediately and not soak into the shoe, making your feet wet.  It’s not just marketing-speak, the stuff works.

The sole is made of Vibram rubber with a tight collection of small hexagonal lugs that don’t feel “bumpy” on the pavement. They provide enough traction for all my runs and have performed well. 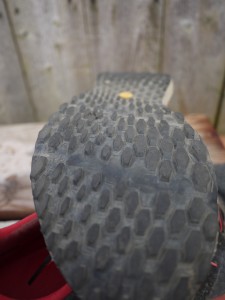 This isn’t a shoe for HURT, but will work well for most other trails.  The Ultra Trail is perfect for groomed trail running, is pretty good at technical trails, and hasn’t disappointed on the trails in the rain or mud. If you’re looking for a shoe that can handle “hiking trails” as well as the pavement needed to run to the trailhead, this is a great option.

I wouldn’t think twice about wearing this shoe in a 50 miler. It would be towards the top of my list.

Unfortunately, I haven’t had the opportunity to submerge them to test their drainability. I’ll update this review once I do.

I’ve got about twenty pairs of shoes I’m cycling through right now. It’s nuts. I chose these to protect my feet during Sunday’s Epiphany 60k in the Oakland Hills and I’ll be wearing them on my 20 miler tomorrow morning.  They don’t rub, they don’t squeeze, they’re light enough to keep me quick, and my feet never got tired.

If you like a light and fast trail racer (like the Scott or Montrail), you’re likely to fall in love with 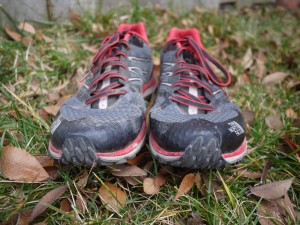 Final verdict? Despite my notions about TNF’s shoes, this shoe has changed my mind.  Well done.

Thanks to TheNorthFace for providing these shoes as complimentary trial samples. URP was not paid for this review and all thoughts are my own.