This should really be considered the final entry of a three part story.

The first installment (my first DNF) taught me that I can’t continue to train on flat land if I want to run mountain races.  It simply doesn’t work for me.

The second installment had me pondering what I can do to continue to race, while accepting the terms of my life: Kids, stroller, and no vert in my hometown of Sacramento.

But with this installment,  I’ve finally found an answer that works. 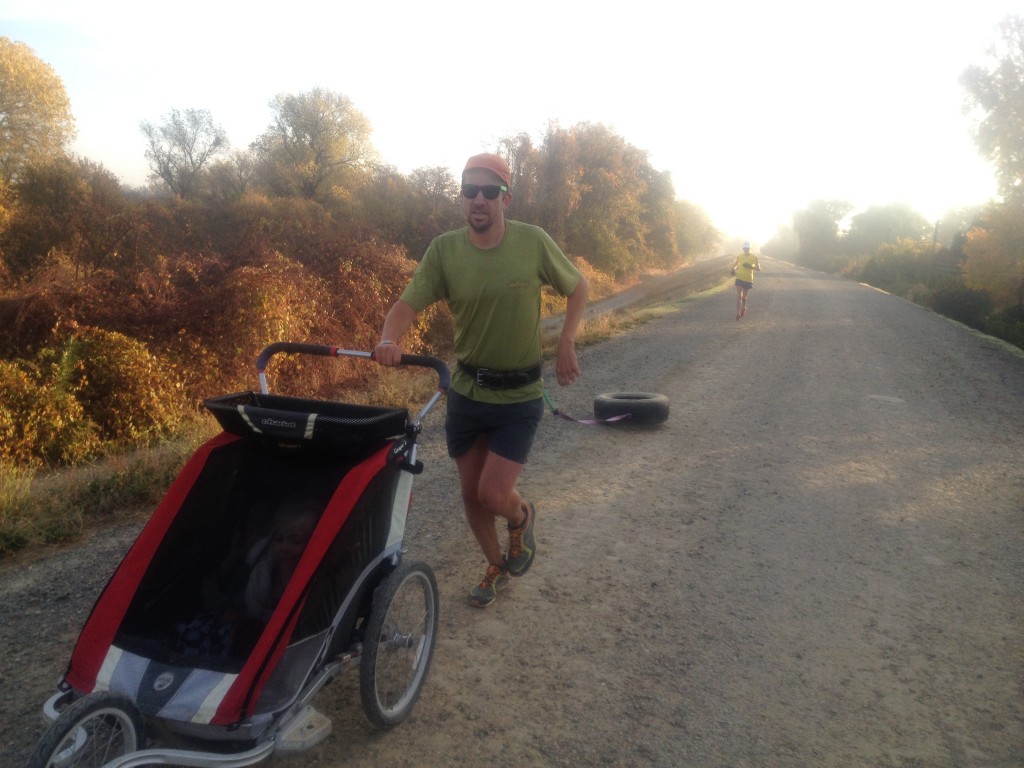 Pulling a tire allows me to run in areas with no hills, train with the stroller, and it gives me significant strength and training for hills.  The only problem is I look like a total lunatic doing it.

Follow along, and learn how you too can reap the fitness benefits of discarded auto parts while looking downright crazy.

How does an otherwise reasonable guy come to the conclusion that pulling an old car tire is a reasonable activity?  I first thought seriously about this as I was crossing all other workout off a list.

. Nope, don’t want to pay a membership, don’t like being inside, and where would the kids go?

. Nope, don’t want to buy a treadmill, and where would I put it?

Nope, too expensive and I want to adjust my body, not just my strength.

. Nope, I value my family time.

I immediately started scouring the internet looking for ways to build a tire pull and methods in which to use it.  I looked at Marshall Ulrich’s DIY, perused the pre-made kits on Amazon, and ultimately went with my own version that you’ll find below.  In the end, it cost me less than twenty bucks and is without a doubt the most effective workout apparatus I’ve got.

You’ll notice that I started pulling with my waist. I didn’t want to jump into this too quickly, and with a tender lower back, I believe this was the right thing to do. I’d highly recommend taking it slow like I did.

After pulling from the waist for two weeks, I moved up to the shoulders and can tell a significant difference in muscle usage and form.

I’ve been doing this for two months now, I’ve spoken to countless other pullers about their activities, and read about it voraciously  on the internet.  However, I’m the farthest thing from a doctor, physical therapist, or coach, so please, take a healthy dose of salt with my advice. 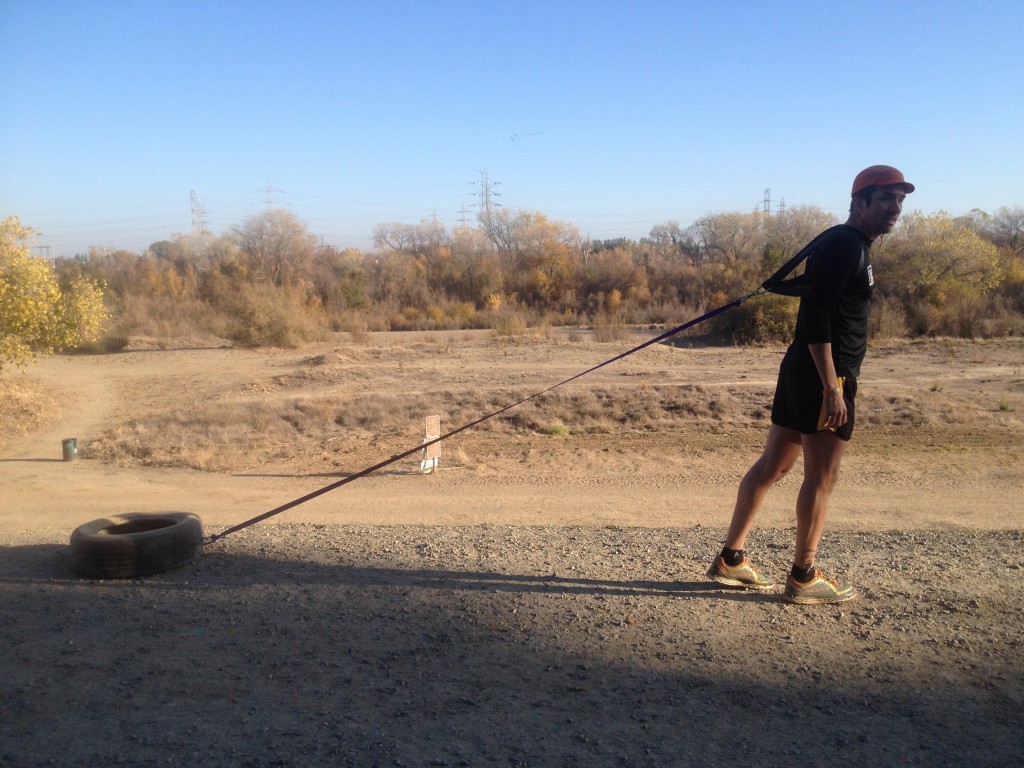 Fair question. When someone like Marshall Ulrich says “Using a tire drag is the best form of sport-specific cross-training a runner can do” I tend to listen.

The result? My calves are sore, my ass is sore, and my core has been given a significant workout from the bending necessary in each activity.

It’s best described this way: When running up hill and pushing off with your rear foot, there’s a lot of gravity pushing you back down.  Sure there’s gravity while running on flat land, but it’s not the same…hence why we slow down and walk on hills.

Pulling a tire attempts to replicate that motion by pulling you back when you push off with the rear foot, again…replicating that motion and training the muscles to be stronger and work more efficiently.

Using a tire drag is the best form of sport-specific cross-training a runner can do.” -Marshall Ulrich

Cross-fitter Erica Bonser says “Conditioning and cross training are what really helps me be able to do those looooooong runs. By keeping the individual muscles strong it helps support joints and ligaments from wearing down after that left right left right for so many hours.”

South Florida runner Smitty believes that running with a tire has taught him to run lighter when he makes contact with the ground, but tire pulling is really best only for people willing to be consistent with the workouts.

For more information on why and when, please be sure to check out Derrick Spafford’s page on tire pulling.

I think the prime candidates fall into a few, overlapping categories.

First, those, like me, who live in areas without hills, but who want to reap the benefits of hill/resistance training.  I’ve found no better way to do it than this.

Second, and overlapping with the previous group, are those want to be a stronger runner in order to avoid injury, increase speed, etc.

Tire pulling is also a great workout for anyone looking to simulate the “heavy leg” and fatigue feeling that comes later in an ultra, says Sarah Scozzaro, a coach on fitnessaligned.com.  Makes sense. For anyone who’s really gone beyond 50 miles, lifting the legs up and swinging them forward can often be a lofty proposition.

Finally, the perfect candidate should have close access to a gravel running surface and not have any significant self-esteem issues.

I’d not recommend this for someone with back/butt problems, shoulder issues, or calf injuries,  as the motion of leaning forward puts increased strain on all those muscle groups.

I started out running 3 miles on the gravel, pulling from my waist. Did that for a few weeks (increasing my mileage to about 6), then started pulling from my shoulders. I’m now up to 12 miles or so on a mix of pavement and gravel. Dry pavement is appreciably more difficult. Wet pavement is easier. Gravel offers the least resistance. 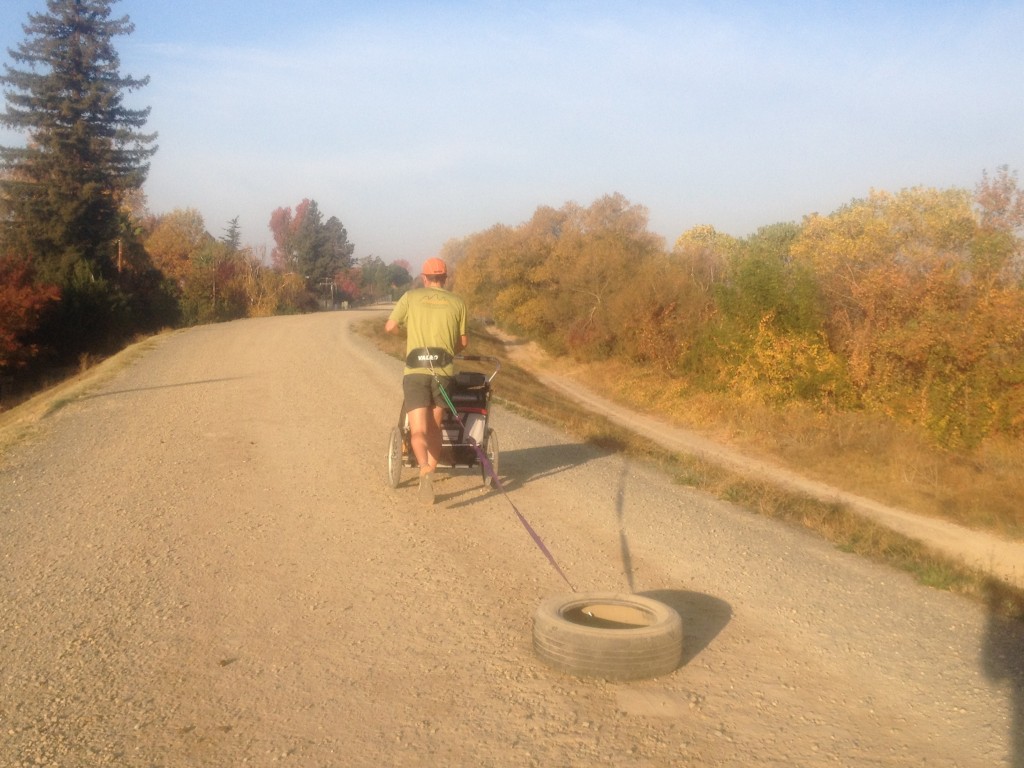 Smitty from Florida trained for Javelina Jundred by pulling a tire for a few months and believes the resistance training was vital to completing his best performance out of 5 hundred mile finishes.

Personally, my experience at the recent NorthFace 50k (6k’ elevation gain) showed me that tire pulling is an effective addition to my workouts. I’ve had no opportunity to train on hills, and not only did I have strength on the climbs, but my speed and turnover on the downs and flats (not to mention the confidence!) helped me run one of my three fastest 50ks ever.

Well, put the belt or vest on, and…run.  You’ll be slow. My normal training pace is low 7mpm pace, and I’m lucky if I’m breaking 9mpm pulling the tire on gravel, 10mpm on the street.

Your cadence will be slower, your stride will be shorter, you’ll be on your toes, pumping your arms, and you’ll likely be sweatin’ like a dog.  Sounds familiar? Like, maybe, you’re on a hill? 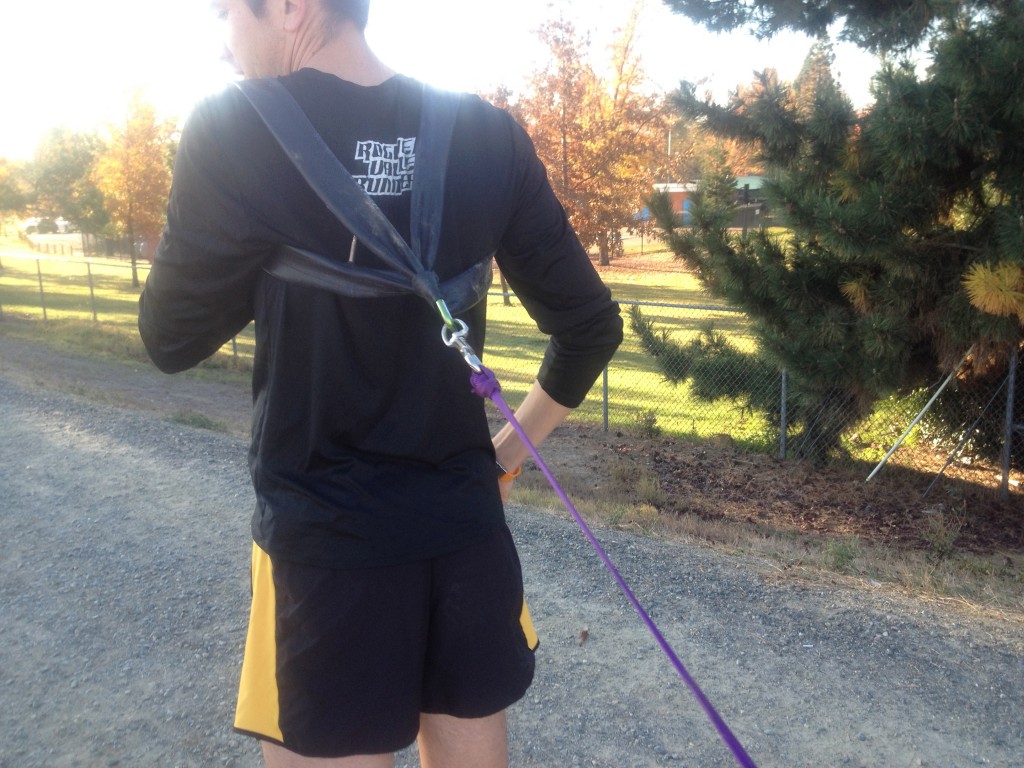 Again, I learned the basics from Marshall Ulrich’s site, but modified them a bit for me (based on what I had in my garage), then added the hi-tech shoulder strap later.  The vest is now my preferred method, as the resistance point is now higher and it forces me to use my core muscles more than before. This method was also recommended to me by Tim Waggoner, someone who doesn’t pull a tire, but regularly beats the crap out of one with a sledgehammer and has used tire drags for his coaching clients.  I tend to listen to people like that.

Here’s what you’ll need (for both apparatus): 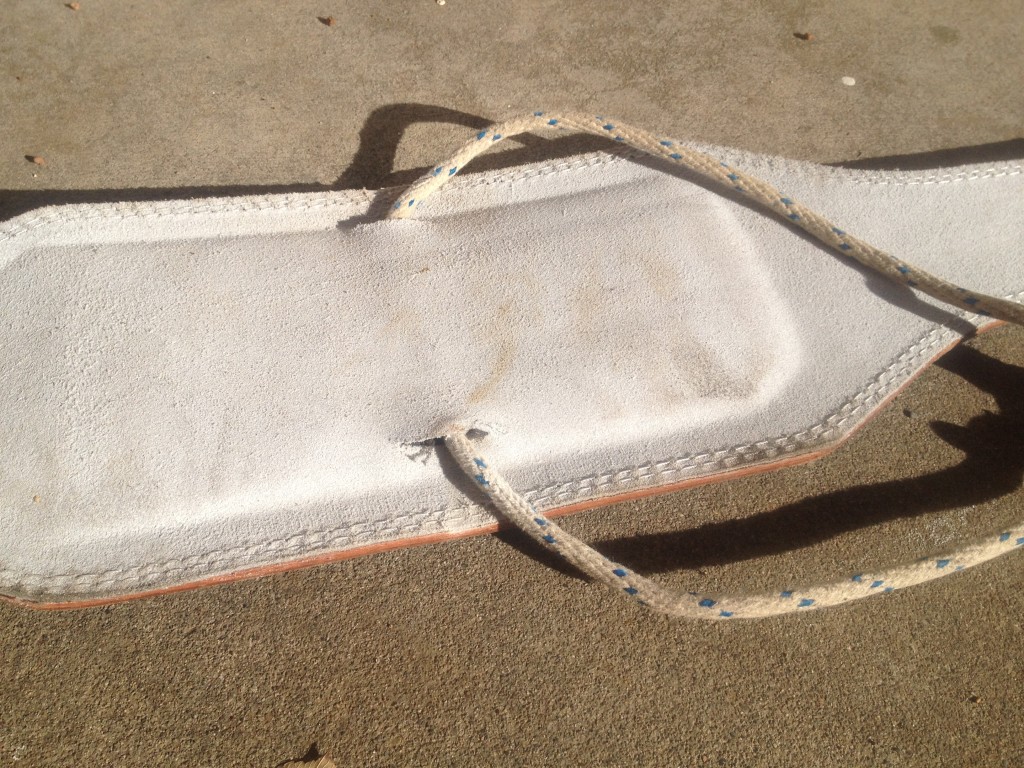 Use a knife to cut a hole (maybe 2″) at the top of the padded section of the belt (right in the middle where it’ll drag from), and a similar hole on the bottom.  What I did was bend the belt inwards (as if around a small waist) and that loosened up the padding enough for me to push a steak knife and some hard wire through the padded leather portion, clearing a way for the rope to get through.  After I had it opened, I pulled the rope (old dog leash) through the holes and tied them off to a carabiner, maybe a foot behind the belt.

Now attach the swivel and the bungee cord.  You don’t want the bungee to be to be old and  loose or you’ll get a bouncy pull. I doubled over a cord and it’s worked great. I tied that contraption to the purple climbing rope, then to another carabiner, then attached it to the eye hook that’s in the tire.  If you don’t have extra carabiners, don’t worry. Just tie the parts together. This is the farthest thing from rocket science. 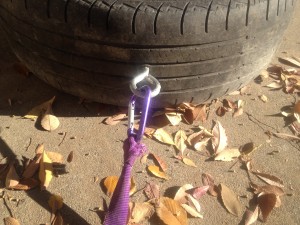 More on the tire.  Again, it’s just a basic tire from the mechanics pile. I used a fairly large eye hook I found in my garage, one that I probably used to hang my tandem kayak in my garage.  It has ~3″ threading and is about 1/2″ in diameter…it’s pretty beefy. If you don’t have one that large, I’d recommend using an eye hook with a nut and bold on the back to hold it secure. 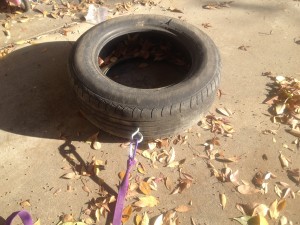 After you’re done with the belt version, simply unhook the carabiner and use it for the shoulder strap. Loop the mountain bike tube (bigger is better) into a figure 8 behind your back and attach it to the biner. No bungee cord necessary, as the tube has enough elasticity to soften the ride.  My shoulder harness slips like an ill-fitted bra, but it doesn’t bother me too much.  I’ll work on a solution and post it when complete.

In terms of length, you want the tire to pull flat, but not so it’s too long to manage.  From the back of the vest to the eye hook, mine measures 8.5′.  Work with it until you get it right.

For a British version (they pull the tires from the other side ya know…), check out Sam Robson’s tutorial right here.

Yeah, it looks pretty silly, but for the most part, I’m doing these workout early in the morning when no one is outside.  If I’m pulling the tire sled during the day, it means I’m also pushing the running stroller, which means all bets are off and I’ve resigned the fact I look like a lunatic.

But all that doesn’t really matter, because this really works.  This is a fantastic workout that will help you see results in hills, strength, longevity, flexibility, and form.  I’d highly recommend adding a tire to your arsenal of workouts if you’re looking for improvement.

In the comment section, reader Elliot wrote about designing a harness that can attach the tire to his back, for use when he doesn’t want to start pulling right out the door.  The pictures are below: