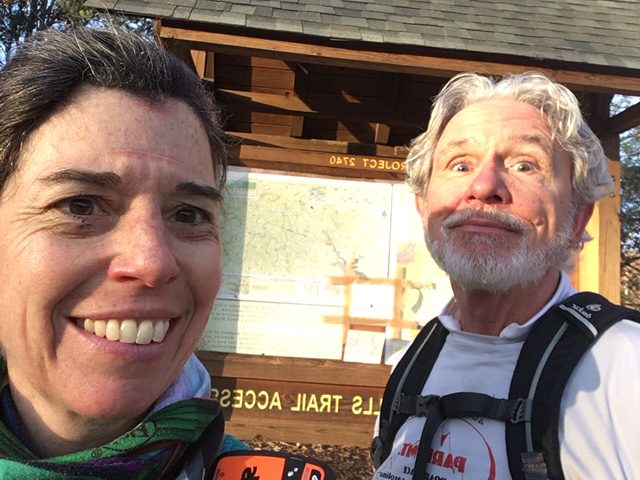 1. How long have you been running?

I have been running for about 37 years.  Started in 7th grade when I accidentally won the junior high 880 yard run.  Biggest shock of my life. Up until then I was the person in gym class who was picked last .  Ran track and XC in high school in PA.  Ran XC for 2 years in college at a very small D3 school.  Our team was never good and was usually the team invited to another school for Parents weekend or Homecoming because we would make their team look like rock stars.

In my 9th year of ultras.  I have only done maybe 17-18 total and as finding time to actually race is complicated.  Have done 3 official 100 mile races and one unofficial one on the track.

2. What is your proudest running achievement?

Different races for different reasons.  There are things you just hold in your heart as near and dear.  For some reason I love the Foothills Trail located in the mountains on the border of SC and NC.   77 miles long, lots of climbing.  There is an official website for those who run the whole thing,  . No awards anymore although you used to get a handmade BMF wallet.  (Bad [email protected]#!er)  December of last year, I was hoping to run the whole thing, but we had wild fires here and part of the trail was closed.  I decided to do the long middle section, known as Laurel Valley, as an out and back.  It is about 34 miles and has no real access points except by boat.  For family reasons, I had it planned on a Thursday, so I could run it, and then we could have the whole weekend to relax together.  Since most other runners would be working and unable to crew or join in,   I would be solo and unsupported.  (Husband not happy about that.  Had to get a Spot Tracker so I could call in Search and Rescue if needed.)

“It ain’t no fun unless there’s a chance you could die.”

Part way through my first crossing, I got an unexpected message in a rare area of cell service from the guardian of the Foothills runners, a 64 year old ultra runner named Lester Farmer, who told me he could join me on the way back.  Lester is famous around here for the quote, “It ain’t no fun unless there’s a chance you could die.”  He has been through the Valley about 30 times.  I had a great run out alone and great run with Lester back.  I think I am proud of that run because I just enjoyed it so much.  No speed records set, no major setbacks I overcame, just enjoyed the day and night and the moment.  We stopped on the bridges, turned off our headlamps and just enjoyed the stars.  Really boosted my confidence in doing the first crossing solo, following the trail, doing some solo night running, but also taught how great it can be to share it with a friend too.  Best of both worlds.

3. What have you learned about MUT last year?

With the new video technology, I have learned how fast the elites really are moving and what it looks and almost feels like to do that.  Great to be able to get that perspective now.  For myself, I have really learned how much I enjoy running in the dark on a trail.  It is exciting and scary at the same time.  In the summer here, those spiders coming at your face in the webs that are all over the trails look like tarantulas.

Western States.  This year was my 3rdtime entered in the lottery.  I always dreamed of hearing my name read as an entrant.  Well, they did read my name, but for the waiting list.   The waiting list is sort of a strange place to be.  You find yourself hoping that people cannot do the race for some reason. (Evil thoughts of injuries, job changes, women becoming pregnant etc.)  I was 19 on the list and am now moved up to 12.  I have decided that if I am in the top 10, I am flying out to the west coast even if I am still on the waiting list.  I want to be ready in case there are no shows.  I figure, seize the day.  I would also love to try the Tahoe 200 or Big Foot 200 someday.  Finally, not a race, but I would like to do the above mentioned Foothills trail out and back sometime as a fun run. 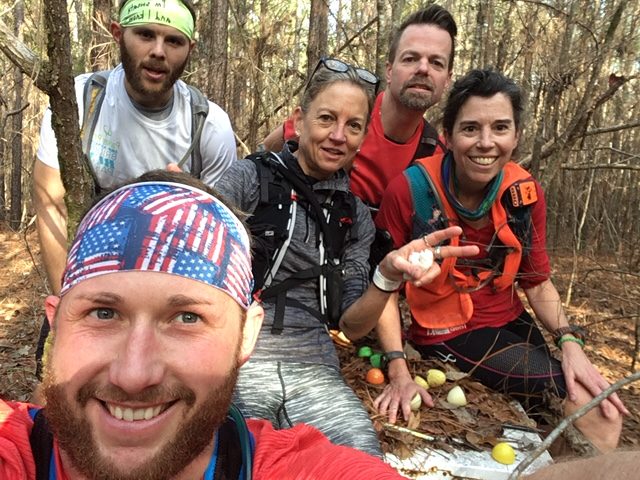 5, Do you follow the front of the pack or are you more interested in what is going on in the middle?

I love hearing about the front of the pack, the middle of the pack and the back of the pack.  Everybody has a story. I enjoy the different perspectives, training stories, race stories of any level of runner.  Everyone has something to share. We are all basically the same when you get out there on a trail.

When we went to the Outer Banks for the Graveyard 100, there was a place called the Outer Banks Brewing Station (first wind powered brewery in America) that had a Lemongrass wheat ale that was awesome.  There is also a great IPA made in Charleston, SC, called Huger St. 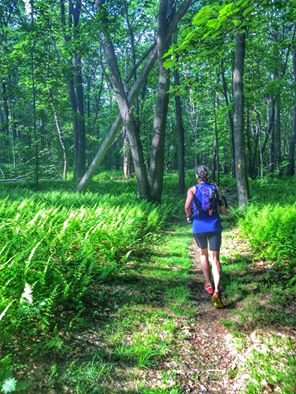