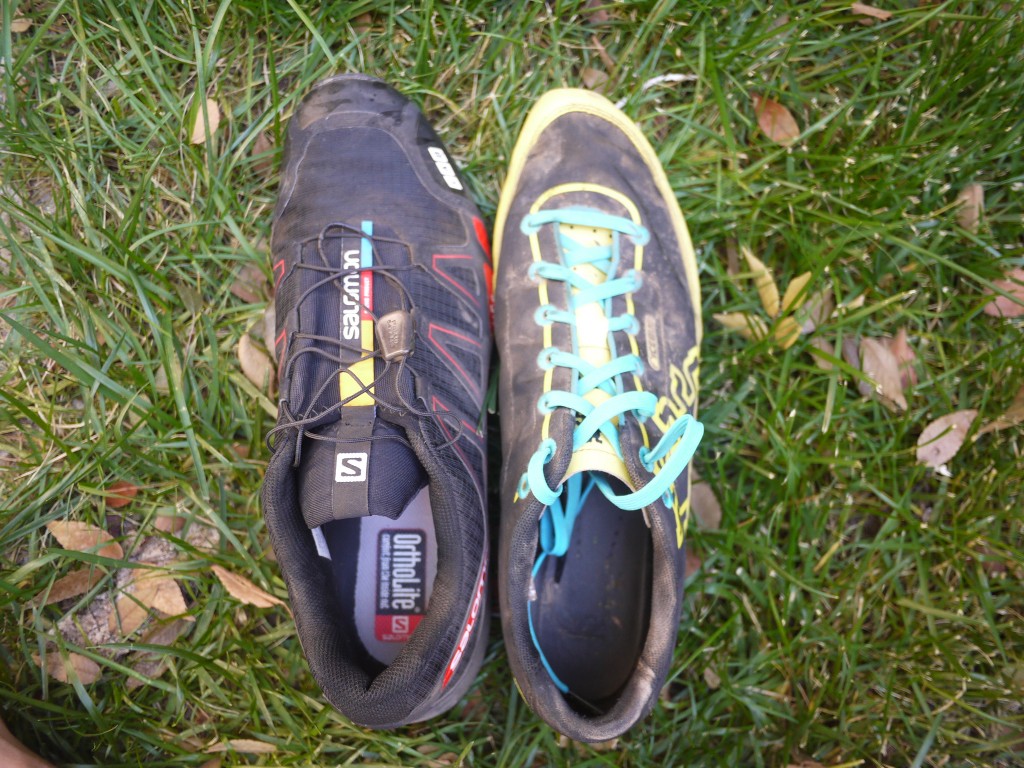 I’ve recently tried out two  shoes that I can only describe as “trail cleats.”  These shoes are made for mud, wet grass, and any type of terrain you want to throw at them.   In my test, I wore the Salomons in a hilly and damp trail half and the Icebugs in a hilly and dry 50k.  They’re designed to race fast over anything and would be suited great for obstacle races to 50ks.

Scotty reviewed the Salomon here, but I’ll do my best to compare it to the Icebug Acceleritas2.  Admittedly, Icebug was a brand I wasn’t familiar with but was happy to try out. They’re a Swedish shoe company that’s making inroads into the US market.  I approached Inov-8 in order to compare their MudClaw or BareGrip shoe, but they chose not to be involved.

Full disclosure: Both shoes were provided to us as samples by the manufacturer.  I’ve put in one solid race in each, in addition to two training runs. These aren’t shoes you’d wear every day, so I’m not focusing on long-term wear.

Icebug wins this section by a lot.

Icebug wins this section by a landslide. 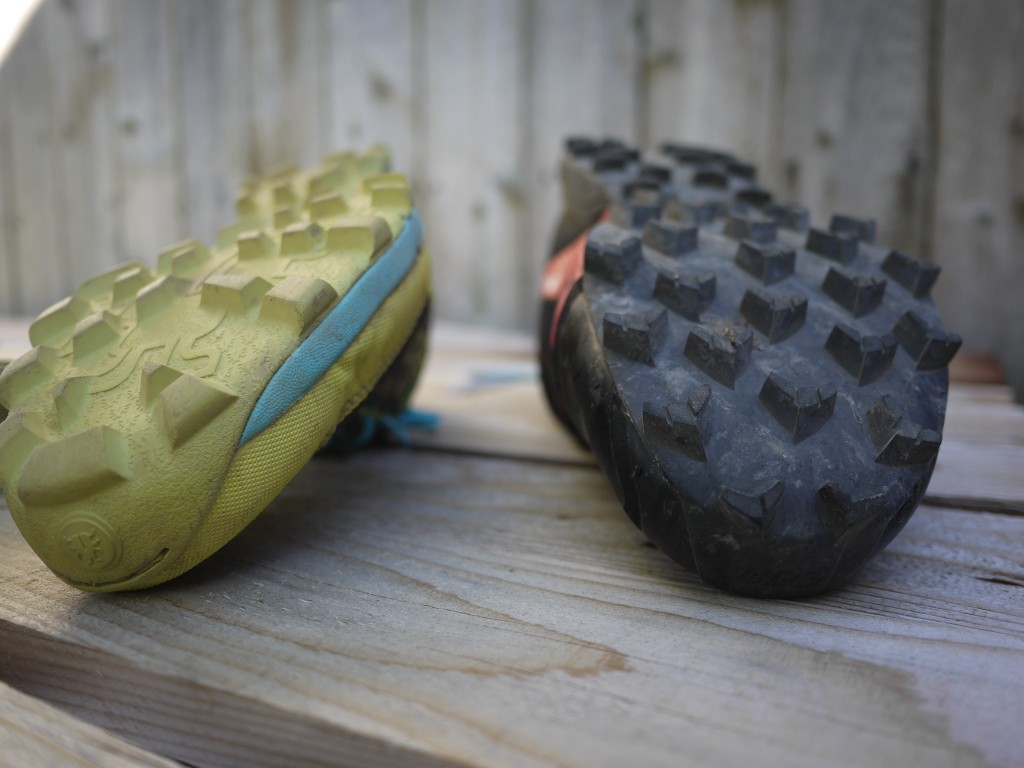 Both of these shoes are very adept at dealing with any type of mud, grass, or dirt.  Both dug in on the ascents and both helped control the descents.  Each test race had plenty of switchbacks and the shoes gave me ample control.  I have no complaints about either shoe except they make me even taller than I already am.

I’d say this section is a draw. 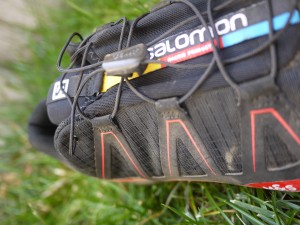 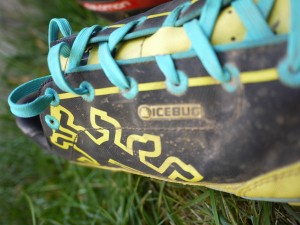 The Salomon has a “softer” upper with the lacing system pulling the shoe tight.  Feels very strong.

The Icebug is made of a material that sheds water instantly and though not waterproof, doesn’t allow liquid to stick to the upper and find it’s way in to the shoe.  I have not submerged them to know if they’d have the “GoreTex” effect of water retention.

While I have no complaints with either, I’d give this round to Salomon. 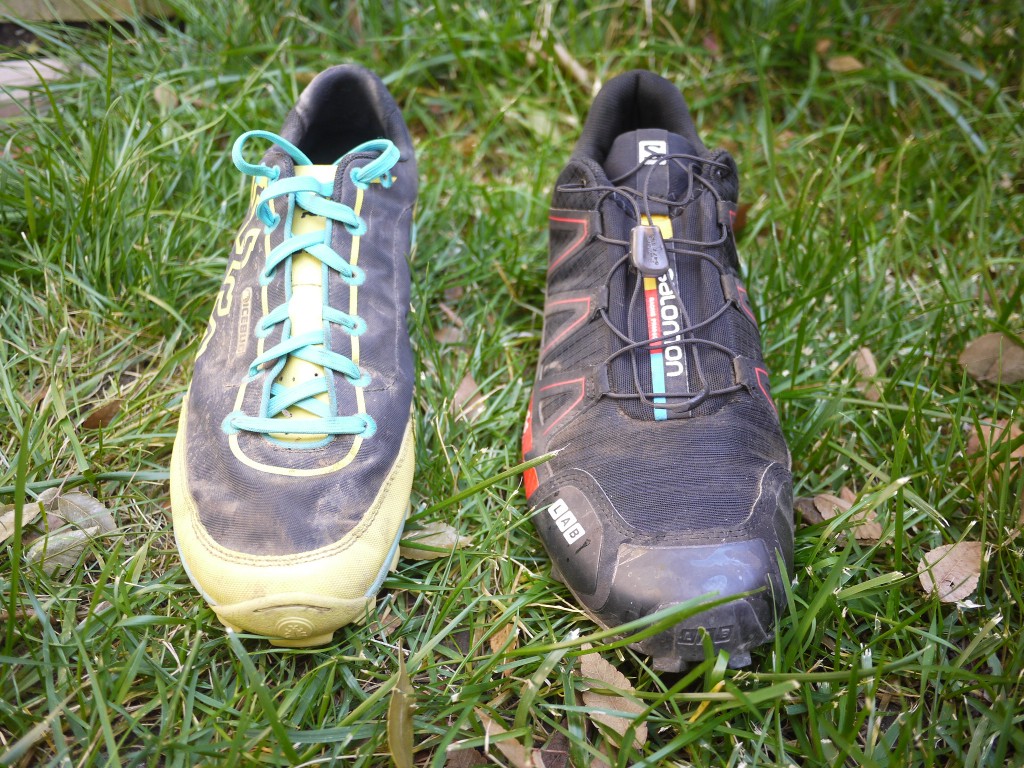 The Salomon looks like a Salomon.  Solid looking classic color combination that I’m sure would look intimidating with those leg panties everyone seems to be wearing.

The Icebug is a different looking shoe. It looks thinner on the foot and is yellow/green with blue laces and a wrap around band near the last.  I guess you could say it looks Swedish.

This round doesn’t mean squat, but I’m giving it to Icebug because I like funky looking stuff. 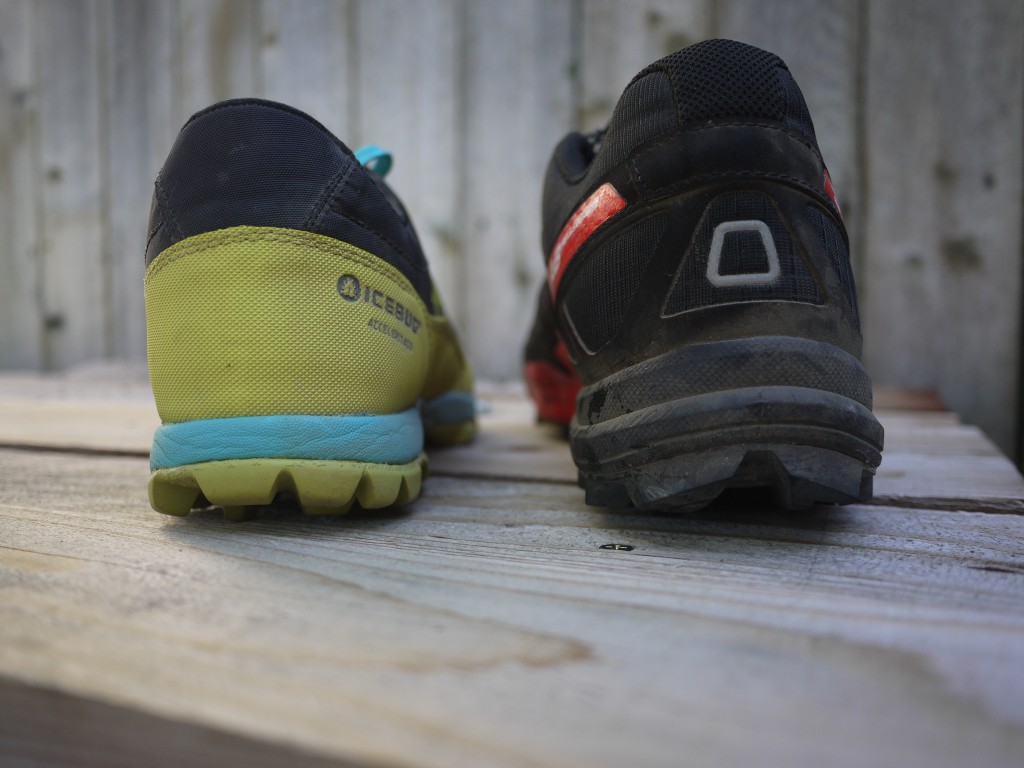 The Salomon will be sold anywhere the S-Lab series is sold, as well as online.

The Icebug is hard to find online, even on the company’s own site, and is sold in very few stores.

This round goes squarely with Salomon. 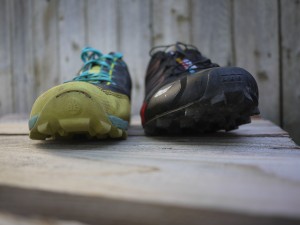 Both have 4mm drops.

The Icebug has a much tighter fit than the Salomon. Feels like a cross country flat with giant 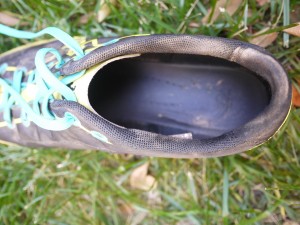 lugs, where the Salomon has more cushioning around the ankle and is “softer.”

Both fit true to size, but both also gave me blisters during my first run (things I don’t generally 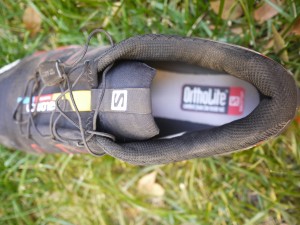 get.) The Icebug messed with my Achilles area while the Salomon chewed up the outside of my pinky toe on my right foot.

The Icebug feels a lot more “minimalist” without feeling like I was wearing a Vibram toe shoe.

I like a tighter, lighter fit, so this round goes to the Icebug.

Both of these shoes performed exceptionally well. If their goal is to help stick you to the terrain and assist you up and down hills, I’ve got no complaints about either. What it comes down to then is weight, design, and price, and Icebug wins those categories by a fair amount.

I have never done an obstacle course (or a proper fell race, for that matter), but from what I’ve seen, the varied terrain of mud, grass, and obstacles would make this a perfect shoe for that usage.

Now go out and run.