Trail and Ultra News From Around the World

Important to trail and ultra success: Workouts that have you changing gears and speed.

No trail or ultra news, but pretty freakin’ cool: Couple goes trekking in Nepal with their kid strapped to a sherpa in a wicker basket.

Three of the Altra Golden Ticket races for Western States are on three consecutive weekends in three different regions:

Mario’s Morning Shakeout is full of good stuff again. Be sure to read the article about former cyclist Michael Gallagher’s tale of EPO use. Honest and forthright, it’s an eye opener that seems plausible, and probably pretty common.

My type of gear: Effective, inexpensive, and innovative.  Check out this new gear review of the Black Diamond Iota headlamp.

I collapsed on my face on the finish line after running down Ben Nevis.

—Scottish ultrarunner completes Ramsey’s Round (28k feet of climbing in Scottish Highlands) in under 24 hours, making him only the 2nd person to do so. UK readers, help me out: How big of an accomplishment is this?

Watch this: Yep, that’s the most terrifying trail I’ve ever seen. 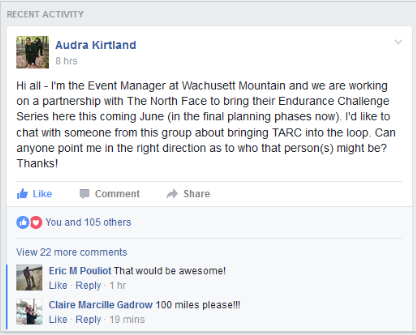 Interesting: Looks like there might be a new North Face event in Massachusetts in June. (UPDATE: Link wasn’t working so I pasted it above.)

Cody Reed brought this beer from Mother Road Brewing (Flagstaff) out to Ethan and I after he talked about it during his podcast. Check out that can lid!  Are there other breweries that use this? Anyone know the trade name?

Last year I published a comprehensive post by Peter Lawson who wrote in detail about his first hundred miler. Peter emailed me to let me know he ran Fat Dog 120 earlier this year, and in bigger news…will be lining up for Hardrock next summer.  Anxious to follow the prep Peter!

Exercise science: This strength and conditioning coach hates running, but will defend it as a good way to be fit…whatever that means.

Two brothers in Singapore–one an ultrarunner, one a diver–are each diagnosed with a neurological disease that is currently wreaking havoc on their bodies.  They’re still climbing (with help), and one of them just got engaged on top a mountain.  Lesson:  Don’t put off your dreams and goals by taking for granted what you’ve got today.

We’ve talked a lot about road runners transitioning to trail and ultra races. How about an Olympic race walker?

Steven Wiseman emailed me yesterday with an update: He made it to mile 30 (farthest he’s ever run), but got pulled at mile 30.  Anxious to run more and conquer another goal.  He’s getting one of these shirts and will be wearing it proudly.

Another reason (not) to run: It helps mens fertility!

Alright, at the risk of sounding insensitive…Who’s to blame for this lady getting lost? Her first trail run and first half marathon, and she winds up 7 miles off course.  Sure, the RD should’ve known there was a runner left out there, but to what extent is he (or any RD) supposed to cater to new runners?  Anyone familiar with this park?

From Dave Mackey’s Facebook page: Below the scene of the crime, Bear Peak, on my last hike on crutches. Much to process today..goals, projects, job changes, my family and friends who have helped me who I have not thanked enough. My prosthetic is at the office and will be fitted tomorrow! Time for a new life chapter to begin.. (and thank you to the lady hiking for snapping the pic)

I’ve been looking back at results from “most talent ever in a race” races, and in my opinion, Chuckanut 2012 wins it.  What do you think?  (And on that note, the upcoming 25th anniversary (SOLD OUT) in March already has Hayden Hawks, Laney, Tyler Sigi, and others signed up…) Scotty and I spoke with RD Krissy Moehl right before the race in this podcast.

I’ve update the Black Toenail Hall of Fame with a few new gems.

More on Ryan Hall’s X-Terra race this past weekend.

Alright, enough of these young whippersnappers. Meet and learn from the guys who really helped build the sport of trail and ultra running.  Great article from ultrarunning magazine.