I stood on the starting line on Saturday convinced that I could do it.  The other runners were bouncing up and down with anxious energy, checking and re-checking laces, looking around at others with thumb and forefinger triggered on their watches, waiting for the blast from the RD.

But not me. I was standing, chatting, trying to distract myself from the fact that I was near a starting line, I was wearing running clothes, and that’d I technically be in a “race” within a matter of seconds.  My goal was to run with either of my parents, who are both in their mid 60s and solid athletes, but with whom I’d be able to run lightly at a conversational pace.

Having not raced all year (calf injury in late January) and knowing the risk of running too hard while still in recovery, I knew with every ounce of my rational brain that 8-9 minute pace would be fine and that taking it easy was absolutely vital to being able to run for the rest of the season. That sentence and thought can not be over emphasized.

It simply wouldn’t be worth it to run this too hard, re-injur my self, and sacrifice the sport that I truly love. I was 360 miles away from home, with no pressure from local friends or anyone in the MUT community to perform well. This was a tiny, small town race with less than 100 runners and there I was, $25 in, feeling like a recovering addict standing in front of a bar on St Patrick’s Day, convincing myself that I could go in and just have one drink then leave.

The RD blew the starting horn and I lumbered towards the line. I’m still fairly out of shape, and found myself breathing hard from the start, but since it would be an easy 3 miles, I figured I’d get used to the slow pace.

By the time I was just about comfortable with a pace (maybe 200 yards in), my thoughts went gray and I immediately started questioning my tactics. Of course I can run faster. Just a little. Nothing crazy…I’m not going to race…but hey, I’m feeling alright, and I did pay $25 for this right? I’m a runner, dammit.

Somewhere near a mile in, the course (a closed rural road) goes up up up hill, and I didn’t have to work too hard to convince myself that well, I am a natural hill runner, and this hill is nothing to what I’m used to and this race is only 5k, and… I ended up picking up the pace a bit.

I wasn’t struggling or pushing hard at all, and the fact that I was moving and in a race felt awesome. It’d been too long, and for the first time in a few months, I actually felt like a runner. I’m sure if I were hooked up to a truth/emotion meter, this was the turning point and I wasn’t going back.

It was right around this mark, balancing somewhere between me feeling great that I was simply running, and feeling antsy because, well, it was a race, that I passed a guy wearing FiveFingers. A few minutes later he passed me pretty forcefully, and it was at that point that my entire running season was in jeopardy. In my mind, this guy wanted to race, and who was I to not give him that respect?

Eric, dude, don’t do this. Let it go. He’s just some guy wearing shoes you think are silly. He’s not a threat. Don’t race him and screw up your whole year of running! You’ve got some awesome races planned and you’ve worked so hard to heal your calf! 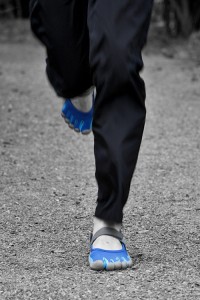 I picked up the pace (on a slight downhill now), and passed him back, taking out a few other competitors in the same push. Looking at my Strava stats post-race, I was somewhere between 5:40 and 6:40 mpm.

Once passed him, all bets were off the table, and I pushed relatively hard to stay in front (I had a good 100 yards on him), and my stupid voice told me that since the finish line was near, I should push hard just to ensure an age group win. Yeah, I recognized that doing so may jeopardize my summer and fall of running, but I was feeling no pain at the time, and I’d probably be OK.

The finish line eventually came within sight and I saw my wife and kids standing and cheering. Since I’d promised her I’d take it easy and talked her ear off the whole 6 hour drive about my inability to control my emotions in a race, I slowed down as I passed, trying to mask the effort. I knew that if wound up lame afterwards, I’d never hear the end of it, and that guilt was something I wanted to face. It felt great finishing, but the moment I crossed the finish line, my thoughts turned immediately to my calf and whether I felt any pain (I didn’t.)

So I finished 7th OA, and yes, I beat the guy in Vibrams and I felt successful. But you know what, it’s embarrassing even typing that. What does it matter that I finished ahead of that guy? What if I’d come in 8th? Would today be any different? Of course not, but there’s something about running hard and leaving it out there that affects my primal being in a way that’s tough to control and equally difficult to describe.

While I’m relieved that I still had some amount of fitness left (boy does my cardio have a long way to go though!), I couldn’t be more disappointed in myself for my inability to control my emotions during a run.

When a runner is in great shape and targets a race, hyper-competitiveness can be a positive attribute.  But when someone is in the final stages of a successful recovery and has spent days focusing on NOT running hard, the action of racing–regardless of the outcome–can be seen as nothing but failure.

For the next few weeks, I have to stay away from races of any distance, and focus on my recovery, so when the horn does blow, I’m really ready and able to race.

8 Responses to "Trying to Control Competitiveness"