When Ultimate Direction launched the Signature Series in late 2012, the Anton Krupicka vest (and its larger counterpart, the Scott Jurek vest) were everywhere at trail races.  For a while, it seemed like half the runners were wearing the AK edition, and the other half were heading to the store to buy one.  Here’s my review from Dec ’12.  That vest is light, it’s got a ton of storage, and it doesn’t bounce.

Ultimate Direction has released a few samples for the new edition of the vest and I’ve been wear testing it for a few weeks. When I first heard about the new model, I groaned, hoping that UD wouldn’t “update” the product “for the better” or simply change the color, add some new marketing words, and increase the price.

There are changes to this new model, though they seem well thought out and fairly minor. Here’s what I found.

The original vest has pockets on the back panel that sit awkwardly under/behind the arms.

They were great for stashing stuff but I found them impossible to access without taking the vest off.  Those pockets do not appear on the new vest. 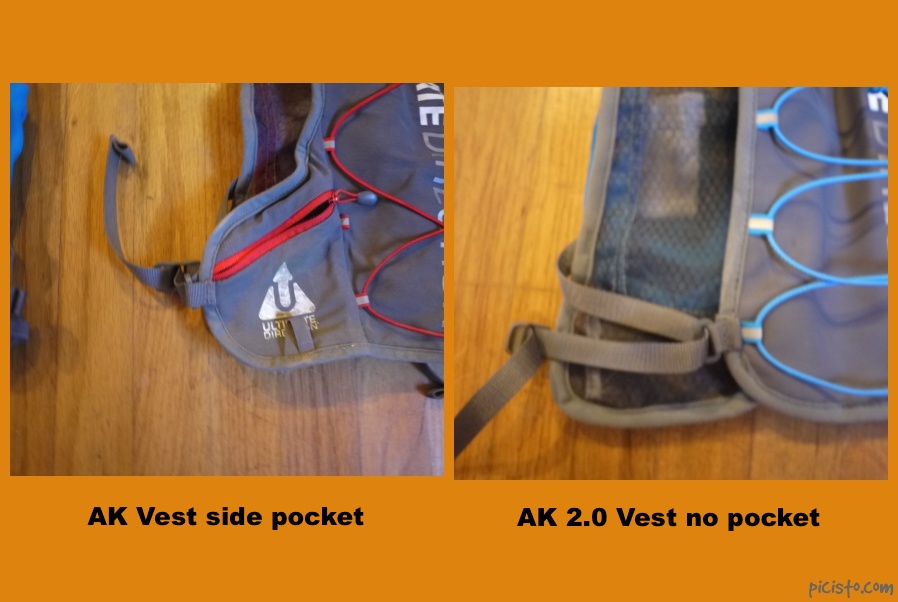 The mesh that holds the bottles up front, as well as the back panel on the rear has been upgraded. Though I never had an issue with the original design, this material feels stronger (though just as stretchy.)

Apparently the rear pouch sits higher on the back (according to the marketing info), but I didn’t notice any difference from the original.

The bottle pockets up front are deeper. The 1.0 cinched around the bottom (and widest) portion of the bottle, while the new edition cinches around the “waist”, holding the bottle secure. It also fits an iPhone5 (with Otter Box) better than the original.  In my opinion, this is the most significant change.

The bungees on the back are more secure in the 2.0.  The original version has 8 secure points 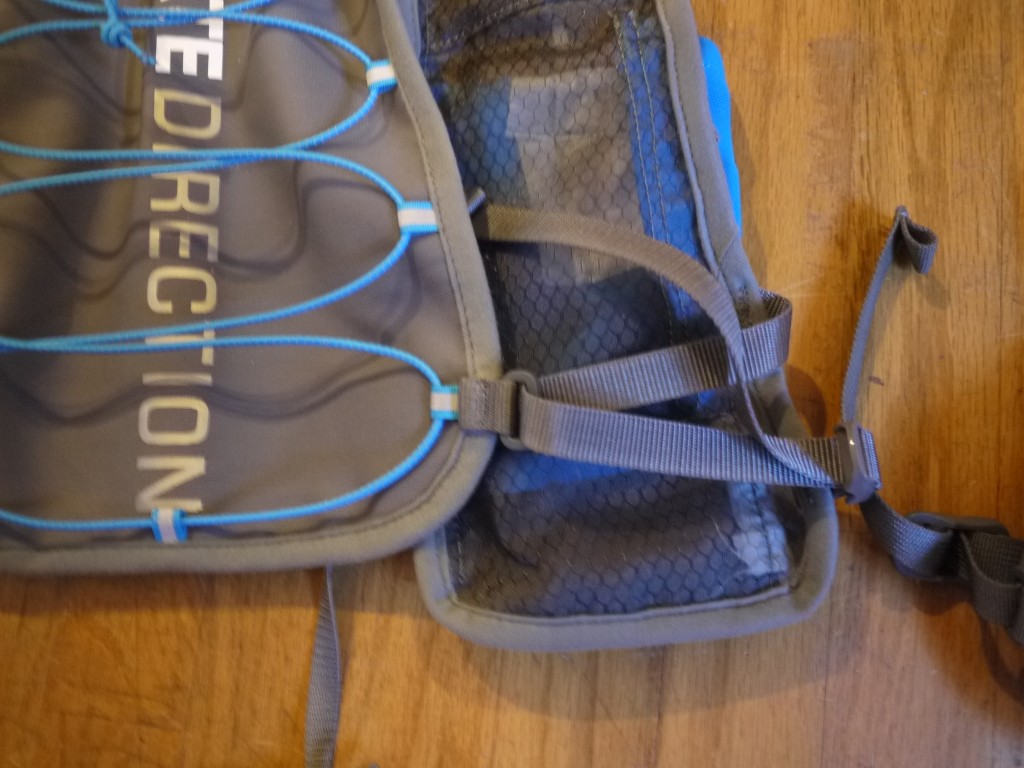 The color and logo have been updated.

The “paper” portion of the pack (covers for the little pockets under the bottles and the branding on front of bottle pouches) seems more normal. The material on the 1.0 seemed space-age. The new material feels like something that would appear on a water proof hat.

What Has Not Changed

They both weight the exact same. No change there.

Same for the fit.  I found no difference in how each pack adjusted and fit my body.

Changes I Would Have Liked to See:

Though an empty bottle holder does the trick, I would have liked to see a pocket up front that fits a smart phone.

I still wish there was a pocket–just one would be fine–that was water resistant.

I would have liked to see the pockets under the bottles open inwards, rather than toward the outside.  They’d be easier for me to access with the opposite arm. 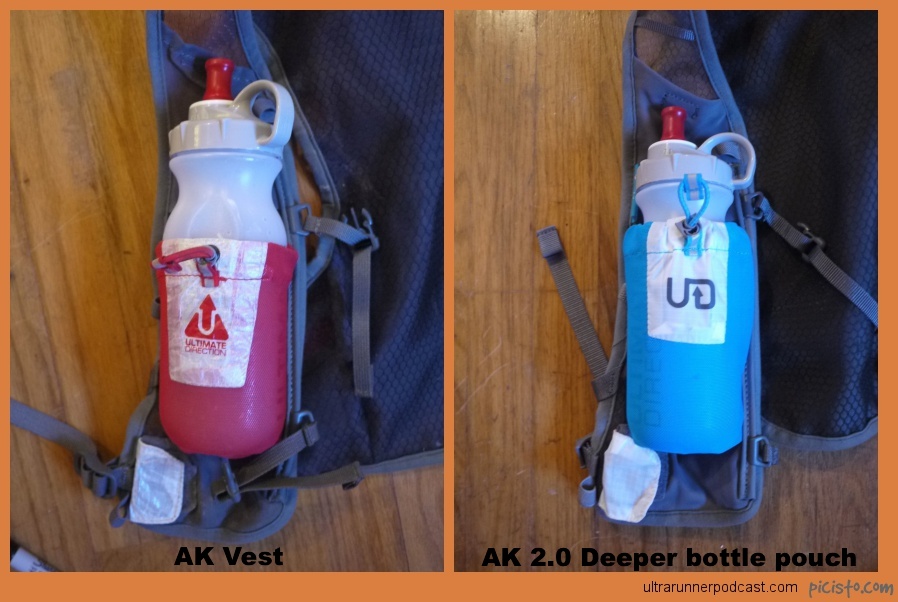 If you’ve already got the AK vest, keep it. No need to upgrade.  There are changes to the 2.0, but they aren’t significant enough to warrant a new purchase, in my opinion.

If you don’t have the AK vest, there’s a reason that so many other people do. The myriad 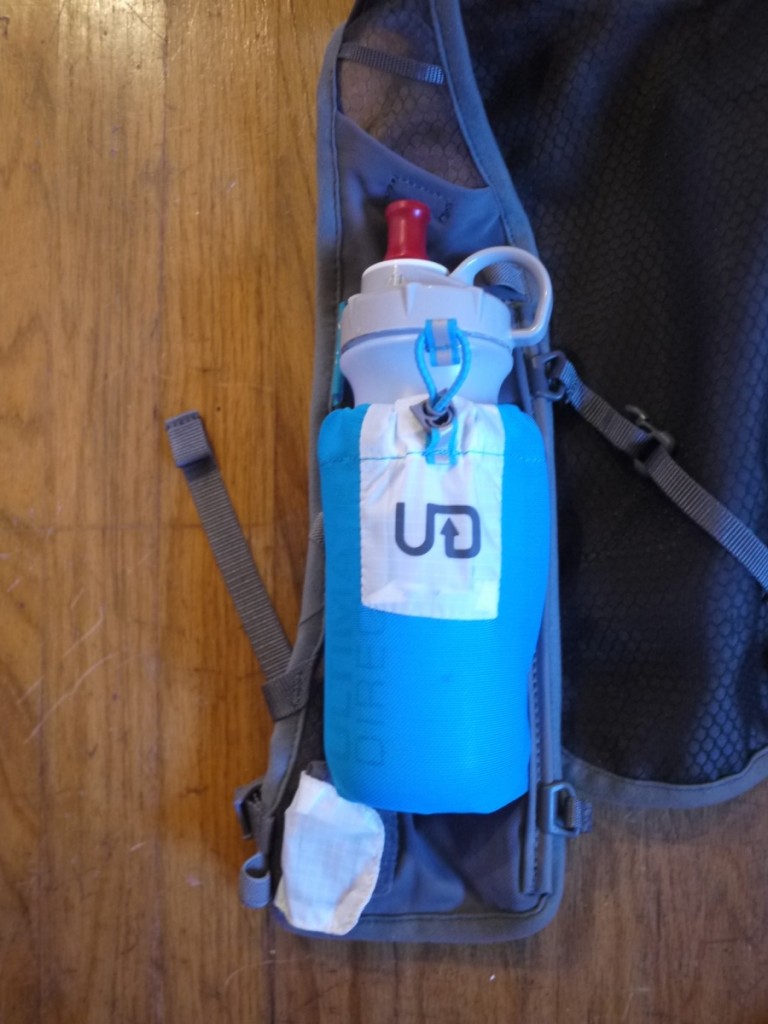 storage options, feather-light weight, and adjustability make it a no-brainer for the vest-wearing ultrarunner.

Hey laaaadies! Did you see our review of the female version of this pack? Check it out here.

The SJ and PB vests have updates too. Most appear to be similar to those on this pack.

And finally, if you’re interested in purchasing this pack, please consider using the link on our right sidebar. A tiny portion of each sale will go towards keeping this site going strong, and hey, it includes free shipping!  Thank You.