Over the years I have experimented with many different running packs and the greatest value for packs is during unsupported long trail runs or adventure running. I had the opportunity to try the Ultimate Direction Diablo hydration pack, and to be quite honest, I initially did not expect to like this as much as some of my other adventure running packs like the Gregory Miwok 18 and did not have Ultimate Direction brand running pack on my short list, but nevertheless I welcomed the opportunity to try this pack.

At first glance, it is obvious that the Ultimate Direction Diablo is designed for longer outings, with a large 2.8L hydration bladder and an additional 0.6L bottle w/carrier integrated into the pack. I am no stranger to the Ultimate Direction 0.6L bottle, my choice of hand carry bottle, and it was nice to see this integrated as part of standard equipment for this pack.  You can use this bottle to carry Electrolyte or any other fluid for variety or necessity and I can see this coming in handy on a long unsupported run where you are tired of drinking water and crave for something different like GU or Gatorade.  Diablo, O Diablo, where were you when I was looking for a pack while preparing for my Grand Canyon Rim to Rim to Rim adventure run in 2009?

I figured that in order to do a fair review of this pack, I need to take it on a self supported long run, so I loaded it up with 2.5L of water and also filled the 0.6L water bottle, along with 5-6 energy Gels and a few snacks  and set out for a solo 30 mile run.  Ok, it might have rivaled the snack aisle at the local seven eleven (Those who run with me know how much I gorge in general, and especially when running).  It was this fear of running out of food/water that led me to  buy my first pack when I took on longer trail runs in remote areas. On the front pouch, I packed my iphone on one side and my faithful Cannon point and shoot SD780..I also packed 1-2 Gels in the generous front zippered pouches to see if they bounced around.  I was relieved to discover this was not the case.  Did I mention that I really liked the generous size of both the front pouches?  There is also an elastic pocket for gels or waste. One of the things I look for in a pack is a “soft but strong” feeling. I like a pack that fits snugly, and whose straps feel soft, yet strong at the edges, as this what causes discomfort and starts to chafe my skin over the course of a long run (And, yes, we are still talking about a running pack). With more than 3L of fluid and snacks, I could feel the weight as I picked it up and put it on. Subconsciously, I groaned as I mentally estimated the instant and impending weight gain. 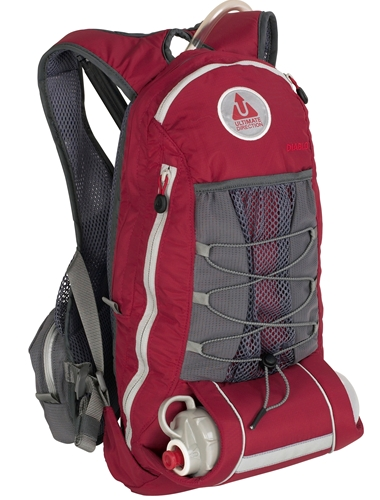 So now we get to the Good, the Bad and the Ugly..I know, you can’t wait to get to the Ugly, right, so let’s get that out of the way first..the only thing Ugly here was me, and I’ve got a few shots to prove it. I really hesitate to say there was anything “Bad” about this pack, but overall, I did have a few complaints.  I  noticed right away that the shoulder straps rode high around the rear of my neck and  have a narrow fit on the sides of the neck around the neck-collarbone area. I knew right away this could result in chaffing down the road and made a point to get my buddies with larger body frames to try it out later to rule out the tight adjustments on my small frame.

As I put the pack on, I was surprised to find out that it felt a lot lighter on my body and it comfortably conformed to the contours of my body, giving me that snug and comfortable feeling, but i knew I needed adjustments as a galloped a few steps to do a “dynamic comfort” check.  There are several adjustable straps and these multiple adjustments ensure a snug fitting.  I did wonder if the pack was designed more around a medium frame, as I had to really tighten most of the straps to fit my small frame.

During the run, my concerns about the narrow and high fit around my neck area proved correct and I stretched my shirt under that area to cover the bare skin, which worked and prevented chaffing..but I had to continually reposition the shirt over the bare skin throughout the run and it was annoying me. Outside of this potential hotspot/rubbing, the fit was great and felt one with the body.

As luck would have it, I chose what turned out to be the warmest day in February 2012 here in the Sacramento area, so I was able to get some warm weather testing done on the pack.  While I was sweating rather generously, I felt relatively dry on my back  area under the pack,  I felt that area between the back and my back got sufficient ventilation due to the 3D AirMesh back panel  design, as claimed by UD, and the pack continued to feel very comfortable other than the narrow shoulder straps around my neck.  I was able to access my Gels from the front pocket while running and also able to take my camera and phone out, use them and zip the pockets back, all while running, a major plus for me. I did not feel the extra bottle bouncing around and the pack did not bounce either. 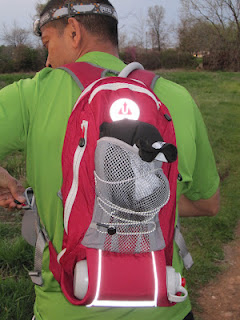 Among other positives is the generous storage compartments..there is a small pocket on the top for quick access and storage of items such as keys or wallet..or food.  There is another big side zippered compartment with large access and ideal for an adventure or self supported run.  This compartment can accommodate more supplies or items like emergency blanket, extra clothing or items for fastpacking.  The pack also has ample reflectors built in for night running.

My biggest complaint about this pack is not about the pack itself but the hydration bladder included with the pack..and for this finding, I credit laziness. I was too exhausted to clean and empty the pack after my run, so I hung it in the garage.  The next day, I went to empty the pack and casually took a sip..and instantly spat out the foul water.  The Plastic/PVC material used for the bladder felt and smelt like pool equipment or pool inflatable floating gear..and the water had absorbed some of whatever material the bladder was made of.  Since I have been told I have bad or no taste, I decided to have some fun and let my wife and eight year old son be subjects of an experiment.  Their reaction confirmed my experience and quickly concluded the experiment.  Do not leave water in the bladder overnight as it will become undrinkable the next day day due to foul taste.  This is a real bummer, because one of the key value proposition is the bladder size supported but if you are running a 100 miler or an overnight adventure run, you could experience a progressive degradation in the taste of any liquid in the bladder.  I will definitely look to replace the bladder.  Speaking of the bladder, it has a big mouth with a velcro based open/close mechanism. I am neutral about it, but I think I can get used to it, as I have runs races in the cold where I have frozen hands and could not open the Camelback bladders I had..so while I think this is a good mechanism, I doubt I will have an opportunity to warm up to it as I will be replacing the bladder due to the aftertaste issue I mentioned.  I also liked the extra outer pocket with bungee cord for storing a jacket, gloves, headlamp etc.

In terms of things to improve, I think the side zipper should open when pulled up, against gravity and close going down, with gravity to prevent it opening due to vibration movements when running. This did not happen during my run, but it is how I would design my pack.  Another wish is to make the shoulder strap material softer and less abrasive..I really like the soft cloth feel of my Nathan pack, and might consider becoming a pioneer of cutting straps from one pack to improve the fitting on another pack, much like some ultra runners modify the soles of their shoes

Overall, I think this was a well thought out design and offer a comfortable fit.   If I did not need to replace the hydration bladder, I would have said this pack is a great value.  However, even with this major complaint, and the narrow shoulder strap fitting, I give this pack high rating for long self supported run/adventure racing. I will continue to play with the various strap adjustments in the hopes that it will alleviate or offset the narrow shoulder strap issue I mentioned. Be prepared to replace the bladder or emptying right after use.  I will take the  pack for extended runs in the Canyons of the Western States 100 mile endurance run and see how long it takes before the water taste changes.  I did not run with the pack in the rain so was not able to assess its performance in wet weather.