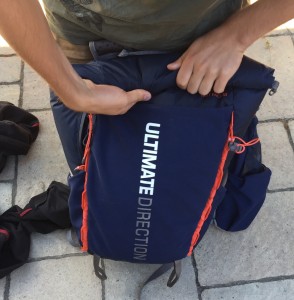 I asked Bill to review the Fastpack 20 here, and Lucas to review the larger version–The Ultimate Direction Fastpack 30. Both guys are experienced fastpackers who have far more experience than I, and both have critical eyes and knowledge to know what works.  Lucas and his girlfriend Julia put this larger pack through the tests while fastpacking around Lake Tahoe for the past six weeks.

The version of this pack they tested was a working prototype.  We were in communication with the design team at Ultimate Direction for updates and most are reflected in this review.

For better or for worse, the rising popularity of ultrarunning has changed the sport. Races sell out in minutes and are run at capacity. Many runners have sought out less crowded niches within the sport: 200 mile races and long trail FKTs. Those who seek a more serene relationship with nature, but still desire to push the pace through the backcountry must also forgo the support of racing — to complete overnight adventures, larger 15-30 liter packs become necessary to haul food, water, clothing, and gear.

In 2014, Ultimate Direction addressed these athletes with the Fastpack 20. Their fastpacking line is now being expanded with the Fastpack 30, creating the possibility for longer trips, and trips requiring more technical gear.

A first look at the pack reveals a fashion forward design reminiscent of bike messenger bags, with asymmetric detail. The pack looks clean and svelte and is noticeably lightweight. And looking into the cavernous main compartment of the backpack will stir your inner John Muir. 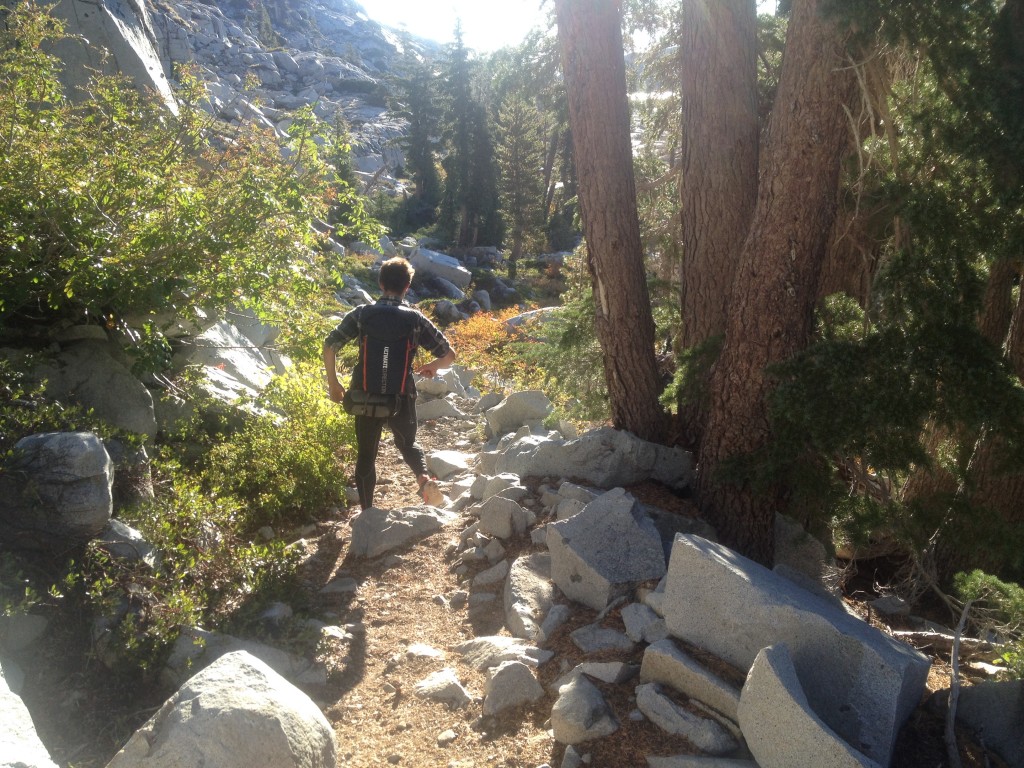 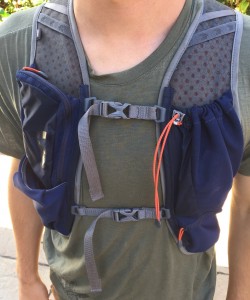 While the design seems very clean and stylish at first glance, many technical features are evident upon further inspection.

The dry-bag-style roll top closure on the main compartment allows the bag to expand to accommodate up to 30L of gear inside while rolling down to keep small loads stable. The closure is also very secure with velcro to keep the edges tight while you’re closing the pack.

Smaller pockets on pack include

Like many recent technical trail running packs, there are very few zippers on the Fastpack 30. There are only three on the entire pack, one along the wearer’s right edge and one on each shoulder strap in the front. While it can be nerve-wracking to place valuable items in open top pockets, I have never had a zipper on a trail running pack work well past the first few 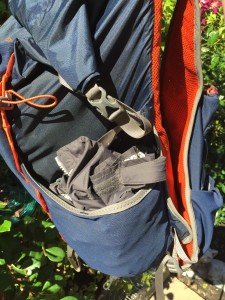 Four loops are sewn to the bottom of pack for hanging a sleeping bag and ground pad. Anyone who has tried to rig a trail running pack to hold a sleeping bag will tell you this is a big deal for overnight trips! That being said, you will still have to create your own rigging to attach a sleeping bag because the loops themselves are too small to hold anything out of the box. More loops on the exterior of the pack are great for hanging other miscellaneous gear such as a climbing helmet or ice axe.

Once the pack was on, the wide shoulder straps were comfortable, although thin, and the hard back was nicely supportive. The chest buckles held the pack close and secure, though they had a tendency to ride up throughout the day.

As a child of trail running packs, the Fastpack 30 does not have any hip straps. All the weight of the pack rests on the wearer’s shoulders. This makes the pack lighter and simpler but can lead to sore shoulders for heavy loads. With a 30L pack, it can be especially hard to use restraint when packing! 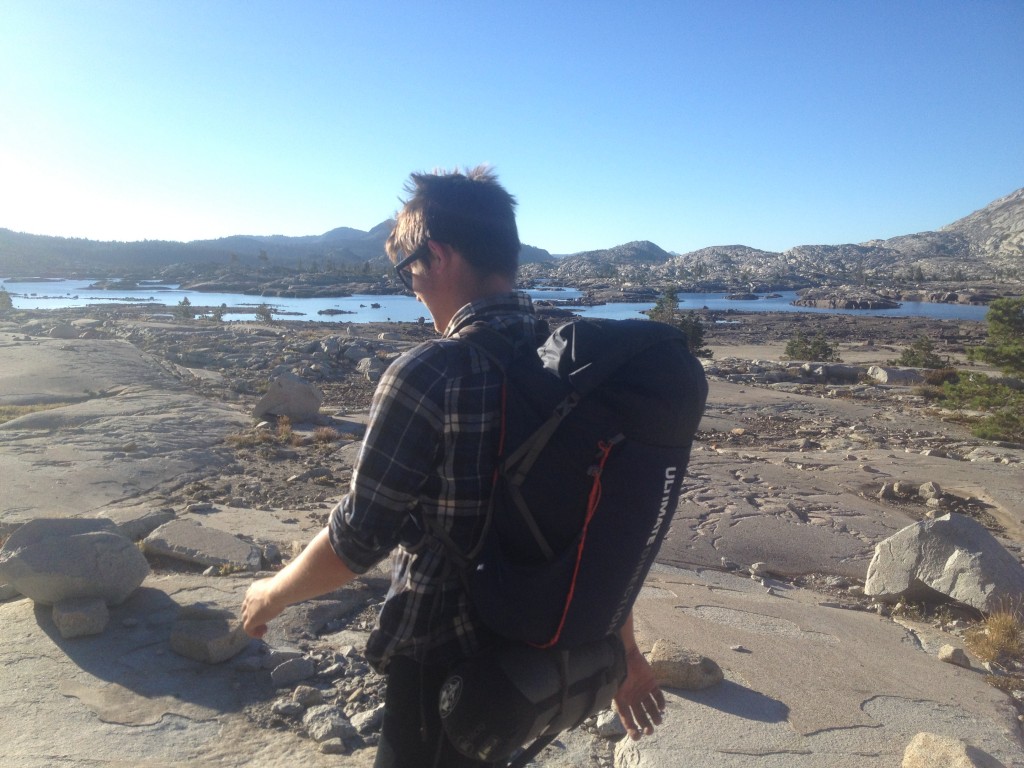 This pack fits a little large. I’m 5’8 and 150 pounds and usually consider myself a size “medium” but the “small-medium” sized Fastback 30 only fit with all straps tightened most of the way. However, with the pack adjusted, I found little to no bounce while running, even descending technical terrain. 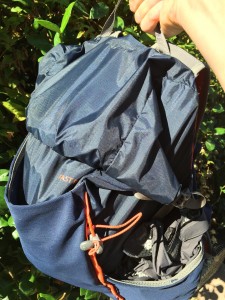 Although the material covering the pack was very light, the hard back added necessary structure and provided a good frame.

The pack sat in a good place on my back while I wore it, and was neither too high, nor pulling down.

The material was tough enough to survive some bush-whacking through thorns, as well as low branches. 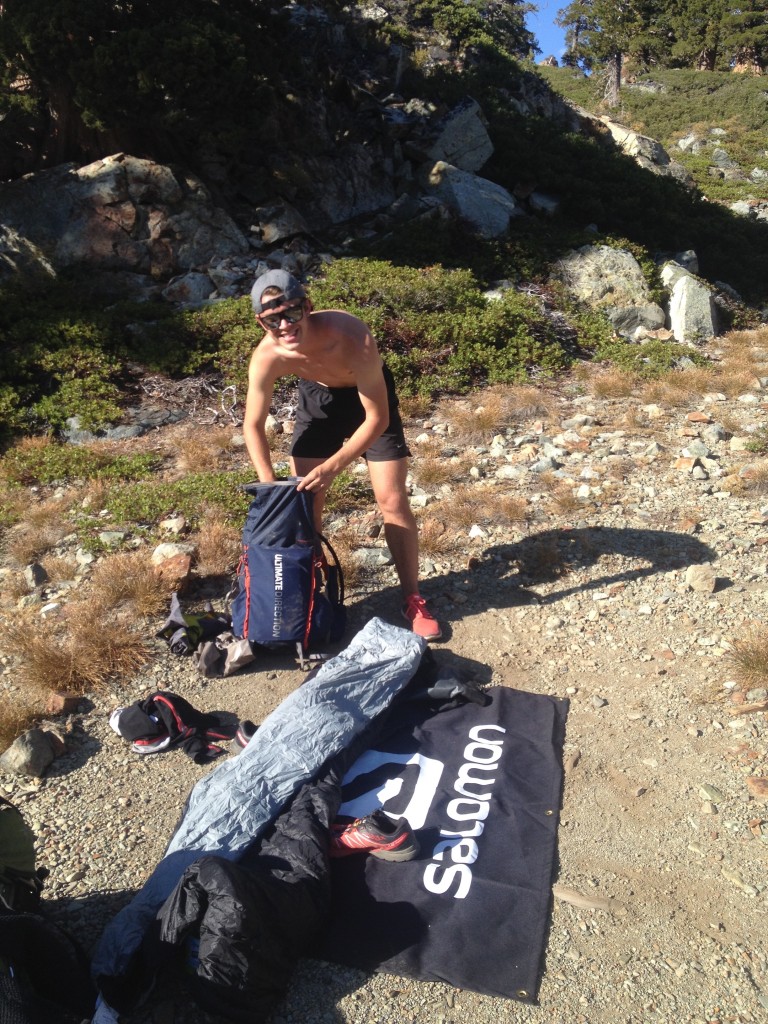 The pack brought technical running features as well as considerable volume to a product aimed at multi-day trips, which could potentially open up new realms to the 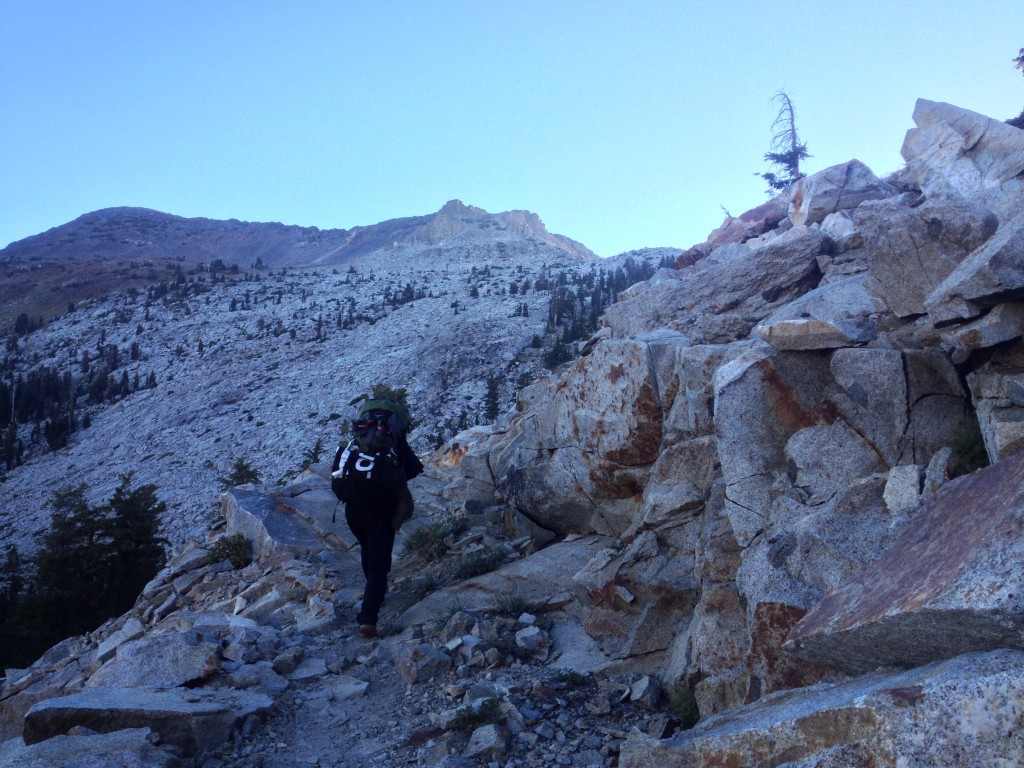 sport. The front pockets made it easy to access key gear on the trail: no time was wasted rummaging for gels or my phone. The gear loops were well placed and they held gear close the pack and out of the way of physiological movement. The pack stayed close to my body, and did not provide antagonizing movement to running, hiking, or climbing. The design was very stylish and felt sleek and fast.

The large size of the pack compounded with the undivided main compartment begging to be filled with equipment and food lead to some heavy loads. The lack of hip straps means all this weight rests on the wearer’s shoulders. Additionally, the heavy pack resting on the bite valve of my hydration pack caused it to open any time I put the pack down on it, soaking gear and 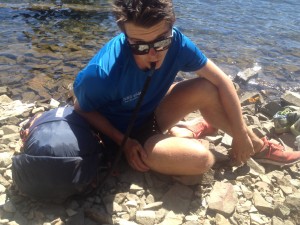 There is no opening for the hydration bladder hose to exit the bottom of the pack and run on the exterior, which is a common feature in running packs that makes it easier to easier to remove the bladder.

The bag was not as water resistant as I would like, and would not hold up to hard rainfall.

If you want to hang a sleeping bag from the gear loops on the bottom of the bag, you will still have to create your own rigging as the straps are too short to wrap around anything out of the box. 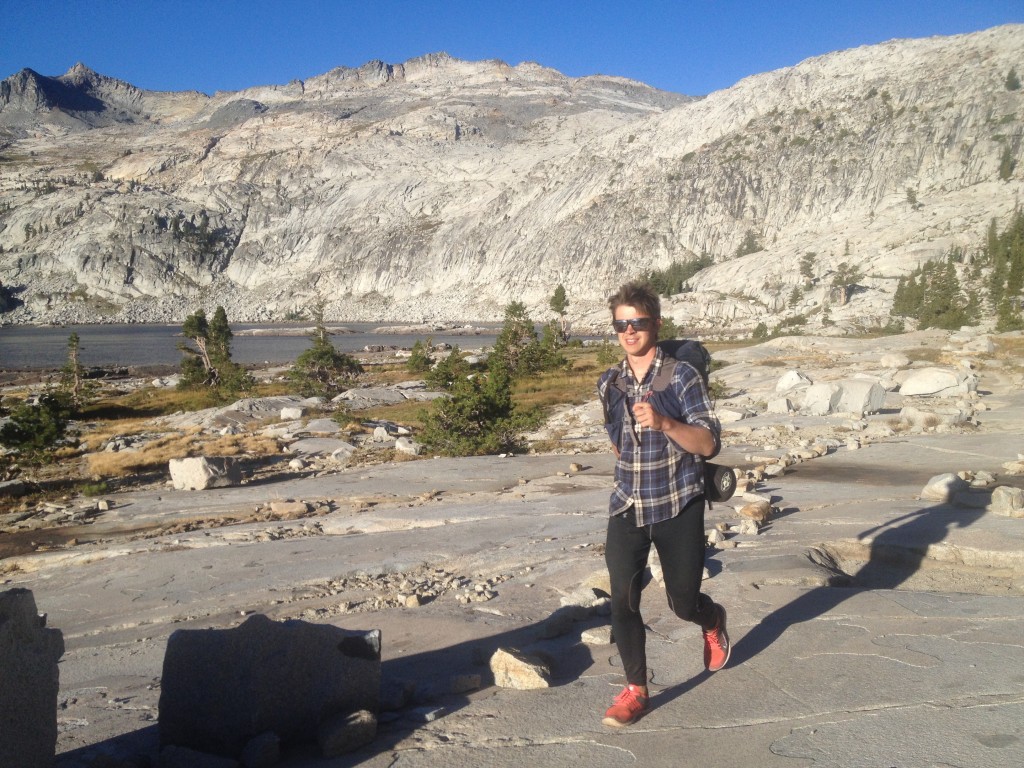 In some ways, it is ironic that Ultimate Direction is building larger packs for fastpacking, a discipline who’s aim is to travel with as little gear as possible. If you plan on trips 2 days or less, the Fastpack 20 version might be sufficient. If you plan on bringing more than 20 lbs of gear, a sturdier pack with hip straps might be more comfortable. But between these categories, I am certain that the adventurers of the world will find uses for this pack on yet unimagined adventures. 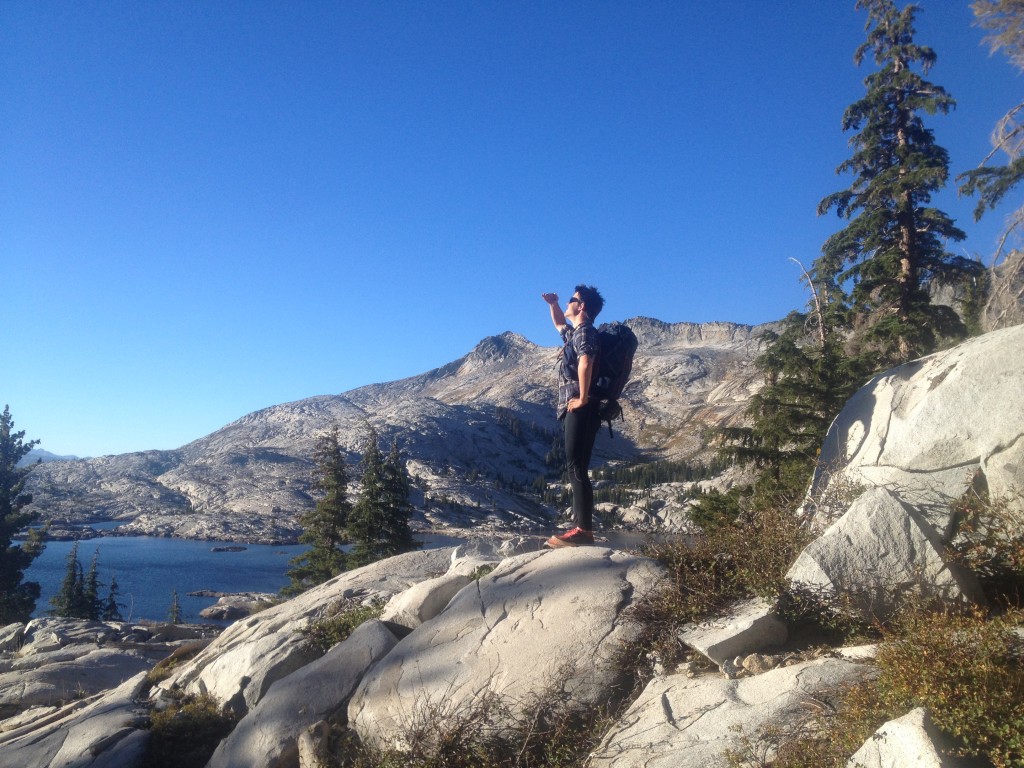 Lucas is a 22 year old ultrarunner, software engineering student, and part-time orange farmer. After 3 years of regularly competing in ultras, culminating in a victory at the 2013 San Francisco 100 miler, he has taken some time off from racing to focus on exploring the Sierra Nevada mountains and developing his hobby project, Scree Maps (http://twitter.com/screemaps)

He had help testing and writing this review from his girlfriend Julia,  a 23 year old ultrarunner, EMT, and barista. Born and raised in Northen California, she picked up a love for nature from her parents and a love for running from high school cross country, now united in ultrarunning. She is currently training to run CIM and take back the downhill Matt Davis Trail Strava segment record.