I first laid eyes on the Ultimate Direction Signature Series SJ (Scott Jurek) Ultra Vest 3 weeks ago when I was asked to review it for URP.  The guys were getting asked about how the vest fits “for a girl” and they were running out of answers. 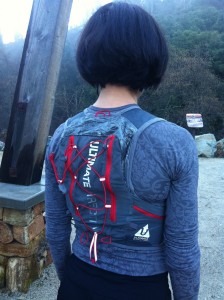 As it turns out, this new style of hydration vest, designed in collaboration with Scott Jurek, holds (2) 20oz water bottles in the front and is now all the rage. I just read recently in a URP Facebook post that these vests are tough to find in stores due to their popularity (but that the San Francisco Running Co has a big stash!)

Clearly these vests are definitely a hot ticket right now. So, what’s all the fuss about? Here are my 2 cents…from a female perspective.

My first impression of the vest was “Seriously?! Bottles in the front? But that’s where my umm…boobs go. “ Dirty Ultra Girls, this review is mostly for you because wearing nipples over your nipples does initially seem counter-intuitive. Guys, much of my opinion about this product won’t apply to you for obvious reasons, so you can skip to the end if you’d like. Wait, I am talking about boobs… which will probably interest you too. Okay, everyone read on…

I have been using the SJ Ultra Vest for a few weeks now. I have worn it on one 20+ mile run and several other shorter runs, and the best way to describe our relationship is as a Love/Hate one.

I’ll start with all the gender-neutral qualities that I love about the vest. I love the fact that it is super lightweight, only 13.0 oz with bottles. Seriously, it’s paper-thin. Also, there are pockets in every square inch of space. Your keys, Gu, cell phone, extra socks, rain gear, and tampons (sorry guys, but I did warn you ) can each have a pocket of their very own. Really, there is so much space in this vest, 9.2L total volume to be exact) that you could carry your own mobile aid station with you. And then there is the nifty whistle sewn into the top left of the front of the vest. This is an excellent safety feature when out on the trails, especially if you’re as accident prone or as GPS challenged as me.

I love, love, LOVE the general design IDEA of putting the water bottles in the front. Personally, I am not a fan of hydration backpacks because I do not like drinking out of a hose and not being able to see where my water comes from. I mean, how do I know there aren’t gross things floating around inside the pack at the exact moment I’m sucking down water?

Even though I do like my Salomon backpack, I avoid using it in favor of hand-helds whenever possible. Also, I think backpacks are a pain to refill because, unless you have awesome concierge service at an aid station, you always end up having to take the backpack off even if someone else refills it. I don’t mind running 100 miles, but taking off my backpack to refill the water plain brings out the lazy in me.

With the Ultimate Direction vest you just whip out the bottles, and Voila! Of course, I can 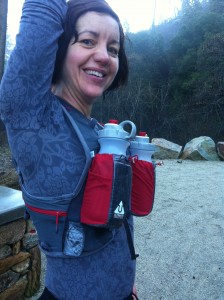 So, the real issue in ultrarunning gear usually boils down to comfort. When I first put the vest on, I thought it had the potential to be comfy. I wore it on a short 6 mile run and still thought it was surprisingly comfortable. I had been concerned that the water bottles in front would interfere with my arm swing, but this was not a problem. I had also been told by another runner that when the bottles were only half full, the sound of the water sloshing around was loud and made it difficult to carry-on a conversation. Again, this was not a problem for me at all.

As a physical therapist, I do wonder if carrying that much weight in the chest region would encourage poor posture. However, I would have to wear it for longer than a couple hours to have an opinion on that. My only immediate comfort complaint is that on a longer 20+ mile run, the inside of the shoulder straps significantly chaffed my neck. The vest would’ve been better for me if the shoulder straps were narrower. This probably would not be an issue with a more broad-shouldered person.

So here’s where the love affair ends. To put it bluntly… I just feel like I look ridiculous wearing 2 large water bottles over my breasts. Pardon me if this is TMI, but in order to make this review as helpful as possible, I should specifically mention that I wear a size B bra. I guess that makes me a little on the flatter size of average where breasts are concerned. Even though I am not terribly well-endowed, I felt like there was just way too much “stuff” around my chest region. If I felt uncomfortable with my smallish “girls”, I can imagine that larger-breasted women may be 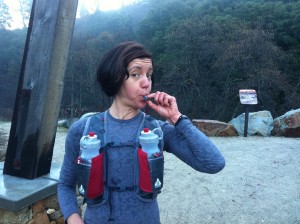 even more uncomfortable. The bottles felt like actual extensions of my boobs, and as such, they should have their own timing chip because it seemed they would be crossing the finish line minutes ahead of the rest of my body.

So there you have it … Love/Hate. Love the fact it doesn’t bounce at all. Love the lightness, pockets, design idea… Hate that the bottles up front make me feel like I have size Triple-D breasts. Girls, I’d borrow one to see if you like it before running out and buying. At around $125, the vest is a significant investment.

Also, I should mention that the sizes do run on the small side, so you may wear a size larger than you might expect. (Ed note: My 28 lb 3 year old tried it on. It was too big, but not by that much. That’s her on the left.) You definitely need to try it on and take the vest for a spin, if possible, before buying.

Will I wear it again? Not sure.  Generally, I am not prone to paranoia, but I m pretty sure that I got a few chuckles from other runners while wearing the vest last weekend. Maybe it was just me, but I would love to hear other feedback from my running sisters. Happy trails!