One day late: Five Star Wars quotes that can be perfect running mantras.

Excellent race report from Caroline Boller’s C&O Canal Path 100 miler.  So true about our ability to justify anything during a race: “I’m not sitting down if I’m not in a chair.”

and a mid packer’s report from MDS.  Huge respect for those who run it, but so much hiking in the sand sounds like torture.

This Week in Science: Juice is killing you. But yay, running is still good!

Five books all trail runners can benefit from.  Oh, I can add a few to the list.  You?

Did you hear the latest episode with Anthony Famigletti?  What type of person would be capable of going from never-run-past-20-miles to signing up for Run Rabbit Run 100?  A two time Olympian, three time National champ, and someone ready and willing to learn lessons.

That episode was sponsored by Destination Trail.  Check out their calendar of trail races and consider the Triple Crown of 200s for next year?

If there’s one thing that binds most runners together, it’s the art of recovery.  AJW’s been there enough and offers his perspective.

Another reason our sport rules: No crazy beer markups.

Ethics and fairness behind the shoes that’ll be worn tomorrow for the sub-2 project.  Some good points.

Fair or not, you bet I’ll be watching it.  Here’s how to catch the livestream.

While that’s taking place, the Wings For Life relay will be gearing up for a Sunday start.

A few episodes ago, we heard Sarah talking about her foray into “shimmy pop.”  In this fun article, she explains it a bit more. Sadly, without any pictures.

I ran with the Camelbak Ultra Handheld Chill yesterday, and found it’s the only soft flask I really like. It’s insulated, has a handstrap, and holds my phone. Win!

It’s been in the low/mid 90s in Northern California this week while Jill is still strapping on the snowshoes for afternoon runs.

Awesome: An ode to beginners.  We’ve all been there.  Every single one of us.

Stay tuned for a new episode with Nicole Ederle, a mom from Texas en route to her first hundred miler in the Fall.  Great lessons on balance and dedication for everyone.

So let me address this important post by Canyons 100k winner Cat Bradley.  If you haven’t read her post, please do so now.

Prior to posting to her site, Cat never once reached out to me to ask why I wasn’t there to announce her name, and if she had, I doubt her post would have had the tone it did. Unfortunately, she didn’t give me that courtesy and that leads us to where we are now. Was I mentioned directly by name in her post? No, I wasn’t, but to claim that “it wasn’t about you” is offensively disingenuous.

Cat spoke with teammate Ellie Greenwood, Gina Lucrezi, and others about her piece, but never once to me. If she’d given me that respect, I would have first congratulated her on a win and then given her a big woot woot for beating Suzanna Bon and Jenny Capel, two super tough women. I’d been updating the crowd with the women’s standings all day and was excited to see the finish.  (Updates were sketchy in the canyons, so were weren’t entirely sure who was leading in real time.) I’m also recording podcasts this week and would’ve asked her to come on URP and share her stories and lessons.  Beating Suzanna and Jenny is a helluva feat and I would have liked to hear more.

But I couldn’t be at the finish when she crossed the line. I’d arrived at race central the day before, helped out a bit, then got some (read: barely any) sleep in my tent, excited for the next day. I was up at 3:30am to help set up, and by 5am I was on the mic, doing what I love: Volunteering at a race, surrounded by the people and trails that feed my heart and soul.

I missed Sunny’s track meet so I could be up there announcing the race. By 3pm or so (I honestly have no idea what time I left) I was exhausted and needed to get home. Luckily I had someone lined up to take over my announcing gig. My sister, her husband, and their newborn daughter Amy had arrived at our house that morning for a stopover (I hadn’t seen them yet) and I wanted to catch them before everyone went to sleep. They live in Southern California and would be leaving the next morning and I wouldn’t be seeing them for awhile. On top of that, my incredible wife Sam hasn’t been entirely thrilled with the time I’ve been spending on URP and I was anxious to earn some marriage points and see her and the kids.

I announced darn near every 10k/25k finisher, every 50k finisher, and every 100k finisher who ran “under the arch” at the halfway mark.  (If there’s anyone I missed, I apologize…names and numbers were coming at me fast and I had to breathe. Another volunteer also spilled his beer on my entrant list which got a bit funky…true story.) For the 100k finish, I announced the first few guys (pretty sure I missed 3rd place when he came thru), handed off the mic to someone perfectly capable of doing the job, told the RDs, said my goodbyes, packed up my tent quickly and drove home.

But no, you’re right, I wasn’t there to announce the first woman. Or the second woman, or fifth woman, or 11th man or 1st masters man or 3rd masters woman, or more importantly, the mid and back pack of runners who are just deserving of attention as the elites up front. I’d gone home to my wife and kids.

But in her post, Cat chose to paint me as the poster child of media sexism by first, blaming me for not being present to say her name, and second, by not recognizing her in the Daily News on Monday.

In that post (screenshots below) , I recognized Amelia Boone’s awesome win at Rodeo Beach (any idea who won the men’s race? Nope, me neither. I didn’t mention it in the post), Annie Weiss’ ballsy FKT attempt of the Ice Age Trail where she’s trying to get the overall time, our latest episode with Seattle-ite 100 miler badass Jess Mullen, Canyons 10k winner Jocelyn Schmidt’s great post about her short-course win, some other links, and yes, a mention of Bob Shebest’s 100k win and our upcoming podcast with him. But what was the focus of Cat’s post? I didn’t mention her win. 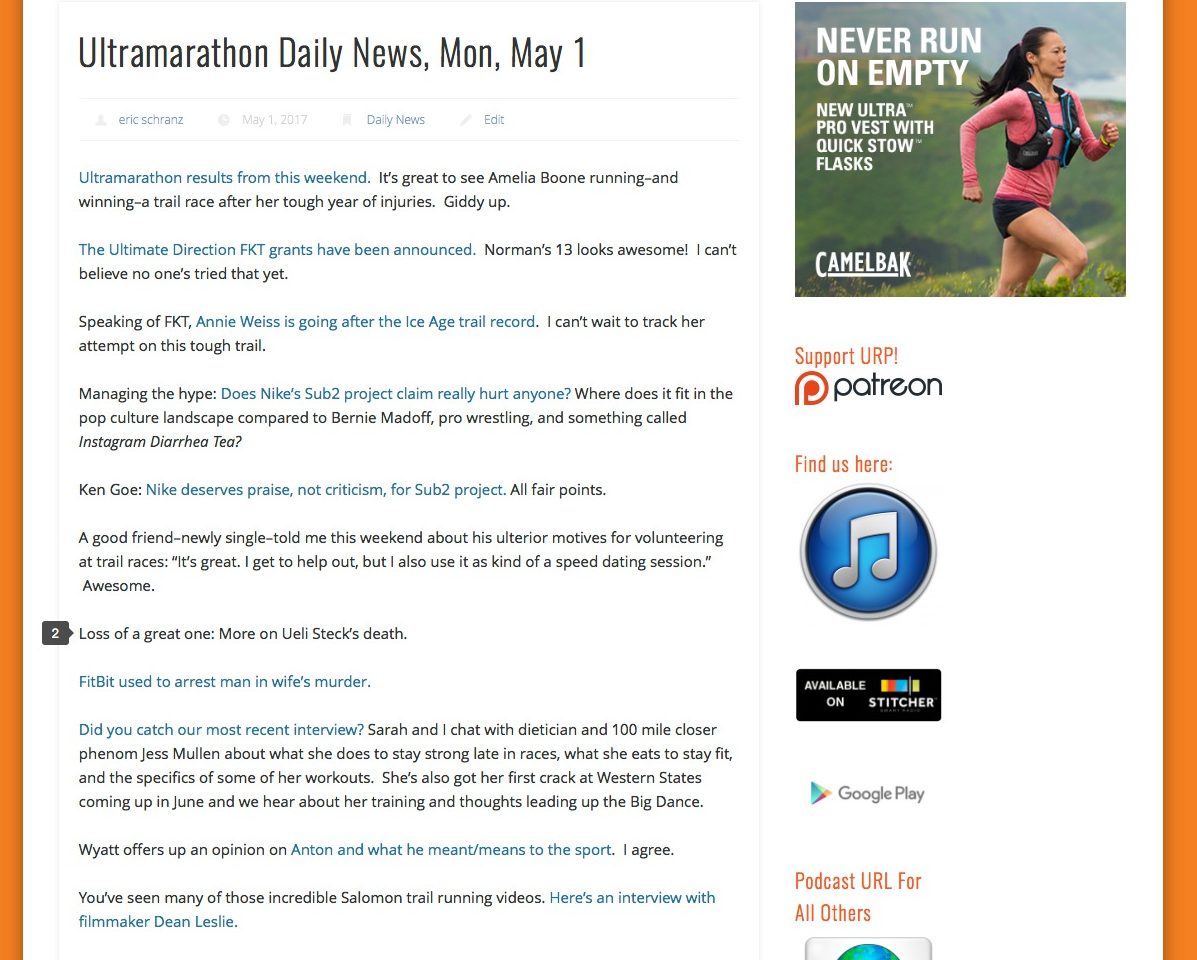 Am I upset and defensive about this? You bet. Being essentially labeled a sexist, then piled on by social media sycophants is absolute, unadulterated bullshit.  Just as Cat used her platform to draw attention (I’d argue unfairly) to a very real and important issue that deserves a good discussion, I’ll use mine to speak out against this type of post.  Cat should be ashamed of how her message was crafted, and based on her tone and direct words during our subsequent phone conversation yesterday, is regretful for posting it.

She’s got a very real issue to discuss, but using me as the vehicle for her anger and frustration is negligent and unfair.  Let’s have a talk about not just the pay/sponsor inequity, but also about why so few women are in MUT media. That’s an important conversation with a direct connection to the main issue.  Or maybe we could discuss the shirt I/you/we helped design highlighting incredible women (not men) in our sport.   But attacking a volunteer by using the “ends justify the means” mentality is immature and a perfect example of the “takedown” irrationality that’s driving people apart in this world and this incredible sport.

Am I sorry someone wasn’t there to announce her name? You bet. Totally. But I’m just as sorry for the near-last place person who’d been chasing the cutoffs, bought their gear and entry themselves, and dragged themselves across the finish line like Ed Liu’s incredible 18 hour gut-fest finish. I’m very sorry for that. Am I sorry for volunteering all day then heading home to be with my family? Not one bit.

Have a great weekend everyone.  I need a freakin’ beer.