Ultramarathon News From Around the World:

Here are some weekend ultramarathon results from iRunFar.  I took a bunch of pics from American River 50 and will post them soon.  In short, Coree Woltering (cover image) went out fast and led most of the race but was having a tough time keeping food down and the heat was taking its toll.  Chris DeNucci  passed him at 42, followed by Chris Wehan and Ian Sharman around 48.  Devon Yanko led from the start and finished in 7:10, despite a pretty bloody fall around mile 35.

Four weeks after suffering a stroke, Jean lined up at American River 50. Here’s his story.

I didn’t think our friends in the UK celebrated April Fool’s Day, which really makes me question this race.  If it’s legitimate, it’s one of the crazier sounding things I’ve seen in a long time.

I don’t know. Getting a medal in the mail would still be cool, but there’s something about the podium, the flag, the anthem, that will all be missed because of dopers.

Wanna watch a doctor prescribe a bunch of banned substances? Here he is.

Cory ran the Zion 100 course solo this weekend. Here’s his recap and pictures.

Sarah’s Lake Sonoma Preview is unlike other previews, but we can all relate to what’s going on with scheduling.

How do you feel about money in ultras?  China is going full steam ahead, offering big prize purses paid out by the local governments to bring attention and “fame” to their areas. Will this draw elites away from US races? How will it affect the trail/ultramarathon scene?  Here’s one of many examples, which interestingly enough, is only looking for top women: 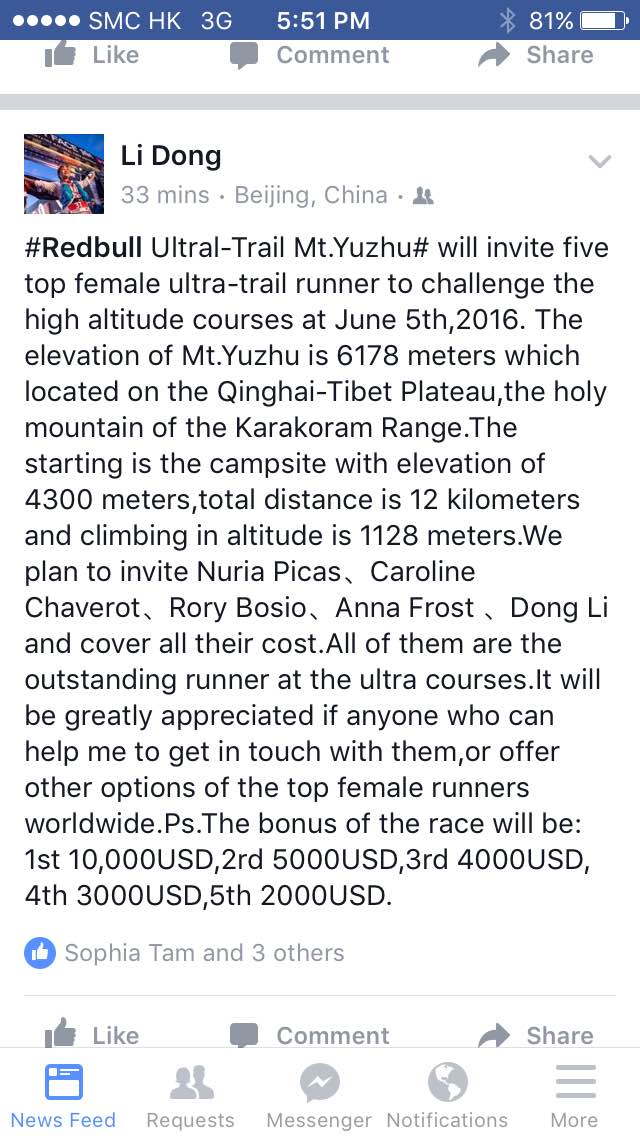 Is the pressure to set new FKTs turning polar adventures into a lying game?

An interesting situation is going on in the cycling/media world.  A brand (in this case, Shimano) has threatened to pull all ads if the magazine runs a certain story. Coercion? Good business? It’s all being played out openly and is both intriguing and refreshing to watch.  One thing I make sure of with URP is a a distinct line between advertisers and reviews…same goes for ambassadors or sponsored athletes writing reviews for this site.  I won’t publish them.

Yay! More people on earth are now obese than underweight.  Wait, what?

Bragging time: My mom won her AG at the hyper competitive Carlsbad 5000 yesterday. She’s 65 and threw down a 23 minutes flat!  Here’s my interview with her from last year.  Full results here (OA winner ran a 13:24!)

As of this writing (and as far as I know), Barkley is still going on with a few guys out on the “course.”  Here’s our interview with finisher Nickadeumus Hollon from a few years ago, and here’s a video of RD Laz where he explains why women can’t finish it.

Speaking of Barkley, could you be the next finisher? Take this test to find out.

How’s your balance? Oh yeah, it could be better. Here’s a cheap and easy way to improve your trail and ultramarathon performances.

Science: More uphill sprints will help your time in a mountain ultramarathon.

Joe flew down to Kansas to run the Psycho Wyco 50k.  Here’s his report.

Compelling: Hunger isn’t in your calories count and blood sugar level….it’s all in your mind, and that’s where you/we need to shape up.

Check out some of Jill’s photos from the Iditarod. Wow, that’s a different type of terrain than I’m used to!  While that’s Alaska’s weather, here’s what Leor is experiencing on the Central California coast.

Personal note: I ran the SacTown 10 miler yesterday.  While it was far from a PR, I’ve been hesitant to push it hard over the past few months, I did so yesterday, and it did fine, which is a HUGE boost for my confidence.  I’m ecstatic that this recovery process is working as planned and am looking forward to more races soon.