IRF/Mock: Justin Mock lays out all the results from the past weeks’ ultramarathon and trail running races. Leadville, Matterhorn, Squamish, and Twisted Branch 100k in New York. Geez, from looking at the splits from that last race, winner Justin Scheid had a 5 minute lead at the 6 mile mark and just kept expanding it. Nice run.

Here’s our interview with Clare Gallagher after her first Leadville win in 2016.

Watch this: Kilian battles with Eritrean Petro Mamu (edit: I feel inclined to point out Mamu’s 2017 conviction for doping) on the final descent of Sierre-Zinal. I know I’ve been saying this for over a decade, but westerner’s stranglehold on most MUT podiums is coming to an end.

Dean Karnazes seems to be having a problem with the whole coyote attack story.

Two things that make the East Coast trail scene so intimidating: Technical, rocky trails and humidity so thick you can chew the air.

I didn’t know I’d find a book excerpt by a fishing guide so entertaining. (It’s much less about fishing and much more about the disdain he feels for certain types of people.)

Ultrarunning/Anton Krupicka: What to know before going scrambling.

Ultrasignup/Beasley: It’s been said that RDs really set the stage and the vibe for a race, and Jubilee Paige is no exception.

Sarah Lavender Smith lost her mom this month and writes a moving tribute to her right here.

To be clear, we need to take integrity seriously in sport. This might mean lifetime bans or steep financial repercussions. It might mean something else. But we also need to acknowledge that balancing justice and grace in cheating situations is difficult. It is challenging to both convey no tolerance for certain actions (such as for taking drugs) but also not shirk our humanity in how we treat those who do these things. Moreover, we should not assume we are above reproach in all respects. Conversations about cheating should be broadened to take seriously the defects in our own characters and involve a little more self-examination.

—Sabrina Little writes about cheating in sports and how the suspects/cheaters are treated. 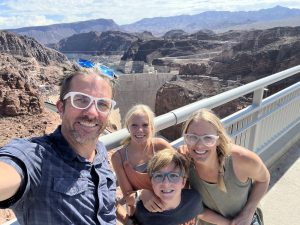 We took the family to Las Vegas last week to really just chill out (you know life is hectic when Vegas is relaxing) and had a great time. Neither of us gambles and we had the kids with us, so we really got a chance to see sites (Hoover Dam) and take care of ourselves. Oooooh, boy, so different than my many visits to LV in my early 20s..not that I really remember them.  Here are a few random thoughts and takeaways from our five days away: