Can we just be done with calling Hardrock a “run” and not a “race” already? ‘Cuz if you’re just running it, records don’t matter, and that was an awesome race! My only other comment on HR, oh man I wish Sabrina and Jim had run!

Peter Lawson was the DFL finisher at Hardrock, coming in at 47:57:15. Recognize the name? Peter wrote a great piece for URP a few years ago detailing how and why to run 200 milers.

A new CR was set at Badwater over the weekend, but some are skeptical of Ashley Paulson’s performance.  RD Chris Kostman addresses the questions and controversy right here.

Tessa Chesser and Adam Kimble both took different approaches to preparing for Western States. In this film, Derrick Lytle follows both of their lives to and at the Big Dance.

An epistemological approach to discussing whether or not males should compete in women’s sports.

And here’s a purely scientific discussion from three Ph.Ds (incl Science of Sports’ Ross Tucker and past KoopCast guest Emma Hilton) on fair competition and the effects of testosterone.

Trailrunner Mag: What happens when your running abilities disintegrate but your mind wants to keep running? Is it physiological? Is it psychosomatic? Excellent essay about a problem that’s all too common in our sport.

At the World Athletics Championships in Eugene yesterday, the sport of Track and Field found yet another way to shoot itself in the proverbial foot.

Have fun in your Sprinter van. I’ll take a lime green and electric Xbus (if they were ever imported domestically.) 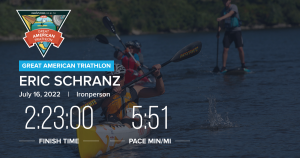 Personal: I haven’t had a race I felt good about in years. Literally, years. That all changed on Saturday when I competed in my first triathlon since high school. Six mile run, 12 miles on the bike (all I’ve got is a single speed hybrid bike with gravel tires) and a 12 mile paddle. Most kayaked or surf-skied, I paddle boarded. I felt pretty good on the run, coming in well under my target time (good and bad, right?), then was completely demoralized on the bike as folks with $10k rides whizzed by me, outta sight within seconds. On the water, I worked my ass off and caught three guys on SUPs ahead of me to win my division. Woohoo! So happy to be racing again…OK, what’s next?