The blisters she formed during Rock the Ridge 50 miler in New York were nothing compared to the four bears she encountered along the way…yep, including a mama with cubs.

iRunFar: How to navigate extreme weather and terrain. Best to know how to handle it before it’s presented to you in real time.

Sarah recounts one of her favorite runs at the Miwok 100k.

Psssst, hey Garmin: It doesn’t look good when your marathon is measured incorrectly.

Why Henry is returning to the Hennepin Hundred.

If you haven’t been following the Newbury Park HS boys, you’re truly missing out. They are, without question, the best high school XC team in history. Two things about this video: First, I get strong Walmsley vibes from Leo Young. Do you? And second, check out how much joy these guys are bringing to the track and to their passion! They’re not pushed by their parents, stressed out over performances, or riddled with anxiety and pressure. They’re having a blast! And daaaamn, 13:43 for the 5k in high school?!? 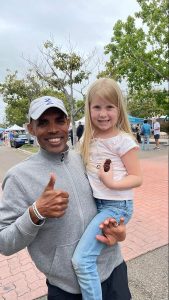 –My niece Amy was accosted by some random guy at Carlsbad 5000 on Sunday.

Once again, it’s the men who decide who can compete–and win–in the women’s category. The message to female athletes is clear: Shut up and take it.

Media: Outside Inc trims a large portion of its staff and publications.

Has anyone tried any of the trail shoes from Norda?