I remember the first time I saw an Elliptigo.  It was on the bike path that winds its way along the American River to Folsom Lake.  The rider was female, 30 something, and looked fit.  Our group of runners started talking, and when someone mentioned that they were about three grand (but also that he’d never tried one), we all laughed about “people will buy anything nowadays!”  Pretty sure we had the same conversation about Hokas, iPads, and calf sleeves…all things I have. 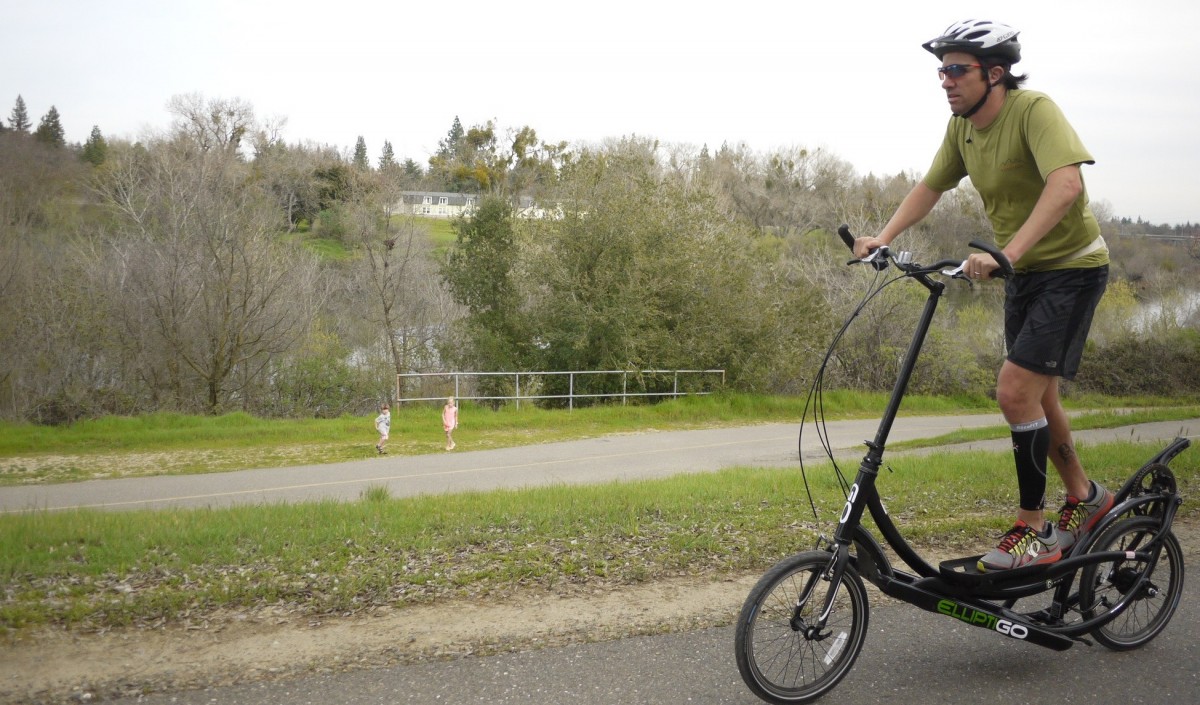 Well, let’s fast forward a few years.  After a persistent calf injury that’s kept me sidelined (both from races and enjoying much of the outdoors), I’ve been searching for ways to improve my cardio, range of motion, and most of all, my fun quotient!  Cycling has put too much pressure on my calf, snowshoeing didn’t happen this year, and it’s been too wet to participate in my favorite cross training activity of them all, inline skating.

Which left me needing an activity that could push this injured runner, allow me to tax my cardio and muscles, but do its safely while having fun.

Over the years I’ve read many reviews of the Ellipitgo from sponsored athletes, saw testimonial tweets from sponsored athletes, and saw marketing guru Dean K set a world record on an Elliptigo.  I finally decided I needed to try one for myself and see if this big, funky, expensive machine is worth the hype.  Would an objective review of the Elliptigo illicit the same passion as those who have endorsement deals?

Cut-to-the-chase summary: The Elliptigo is absolutely legit and riding one is some of the most fun I’ve had while working out.  And the workout is freaking awesome.

So here’s how it went down.  One of the reps from Elliptigo knew I had an interest in trying one out and asked if I’d be interested in a trial ride.  Sure! Absolutely!  This came at a time when my calf injury was improving dramatically and my doc had green lighted me to push it hard.  I’d never so much as touched an Elliptigo, so I jumped at the opportunity to play with a new toy.

The Elliptigo trial plan asked that I meet a rep at a local bike shop, where I would be able to ride one of the “bikes” for about an hour.  Nah, not good enough for me.  To really get a good feeling for something and to be able to share my honest opinion, I’d need to have it for about a week.  I wanted to really see how it handled, how my body reacted to multiple workouts, and I wanted to pick it apart on my own, away from the eyes of a product rep.  The good folks understood and hooked me up with a local enthusiast who came to my house to show me the ropes and lend me one of his toys.

John is in his 50s, an avid runner and cyclist (he did the notoriously challenging California Death Ride on an Elliptigo last year) and a wealth of knowledge with how the bikes work and how the company operates.  He had two Elliptigos on his Jeep, he explained the differences between the 8C and the 11R models, where not to hold the bike (lest you want to lose a finger), and told me about how cross training with one has helped him out immensely.  I was both skeptical at the claims, but also excited to try one of these out.

I’m 6’2, and John made a few simple adjustments to the handlebar neck to accommodate my height, then I strapped a helmet on, and stepped aboard this fifty pound beast.

From the waist down, it feels identical to (what I remember) a normal elliptical feels like.  The foot pads roll up and down on a track, while the bars attached to the rear of the pads spin the crank, which moves the chain, which makes the rear wheel spin. Pretty easy.   The obvious difference is above the waist, where instead of handles to provide arm workouts, the street version had handlebars for steering.

I had no problem whatsoever with balance, but did notice quickly that I wasn’t experienced enough to make tight u-turns on my street.  That would have to come later.

So off we went.  John on his 11R and me on the 8C, we quickly picked up speed. Down the street, past the park, and on to the bike path, free of curbs, cars, or lights. 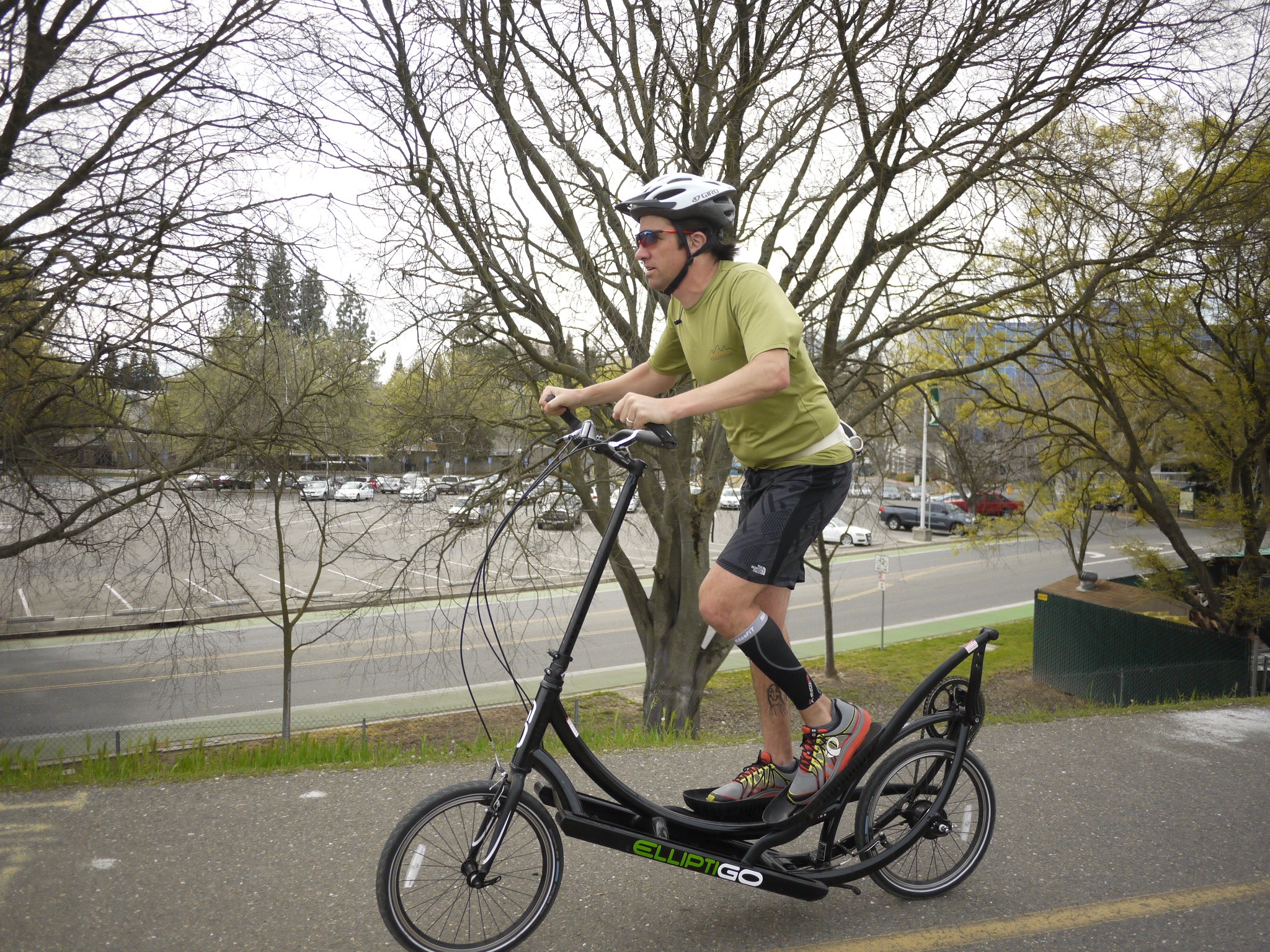 We finished our initial ride (8 miles in about 40 minutes) and I was set loose with the Elliptigo 8C model for about a week.

The next morning I took it out for a real test. Ninety minutes out on the bike path, then head home for a total of three hours. A bit audacious for a second ride, but I had such a fun initial ride that I felt I could push it and get a good workout the next day.

I quickly noticed one drawback: Where do I put my water bottle?  This thing doesn’t have a water bottle holder, and I can’t exactly carry a bottle in my hands, so I opted for a hydration vest. I wore longish running shorts and Hoka Cliftons to see if different footwear would change anything. (It didn’t.)

My three hour ride was intense.  Pushing hard on the bike path, I made sure to stand on the back of the “pedal” while ascending a hill to get more range of motion from my calf.  I also focused on my core while riding and made sure to keep my arms and shoulders relaxed.

After 90 minutes, I’d made it about 19 miles, including a few times I needed to stop to drink.  For whatever reason, riding an Elliptigo with one hand is very, very tough and didn’t want to risk hurting it–or me.  If I needed fluid or food, I pulled over to take care of it.

I turned around and headed home and was feeling pretty wiped out by about miles 30, actually having to stop because I was so beat up and my head was getting light. My phone had died, calling my wife was no longer an option, so I hopped back on and pushed home, legs wobbly from the effort, but still able to push down on the “pedals.”

Though I was bonking hard, the zero-impact aspect of the workout allowed me to push hard enough to keep up a decent speed home, and I finally made it home.

I parked the thing and collapsed on the front lawn, panting, sweating, and completely spent.  If I’d had a heart rate monitor, I’m fairly certain my BPM would’ve been off the chart. My wife poked her head out the window and said “I hope you’re not getting one of those” as she’s not a fan of seeing me in that condition.  This was a serious workout.

Although my brain was mushy and my body was hammered, all I could think of how hard I’d worked, how far I’d pushed myself, and how I wanted to do it all over again.  The best part? After some time showering and eating, there was very little soreness.  My muscles had been pushed hard, but my joints and other spots of soreness were fine, including my delicate calf.

A day later, I took the Elliptigo 8C out for an hour hard. Pushed it at about 90% and again, came back completely beat up, but no residual soreness from either of the workouts.  Awesome! Maybe they’ll forget I have this and I can quietly assume it as my own…

By this point, my skepticism had worn off and I understood how incorporating an activity like this has helped runners like Meb, Dean, Max, and others to pile hard workouts back to back with little recovery.  One test cited by the Elliptigo folks claimed that riding an Elliptigo was 33% more difficult than riding a bicycle at the same speed.  After a week with the machine, that number seemed accurate. 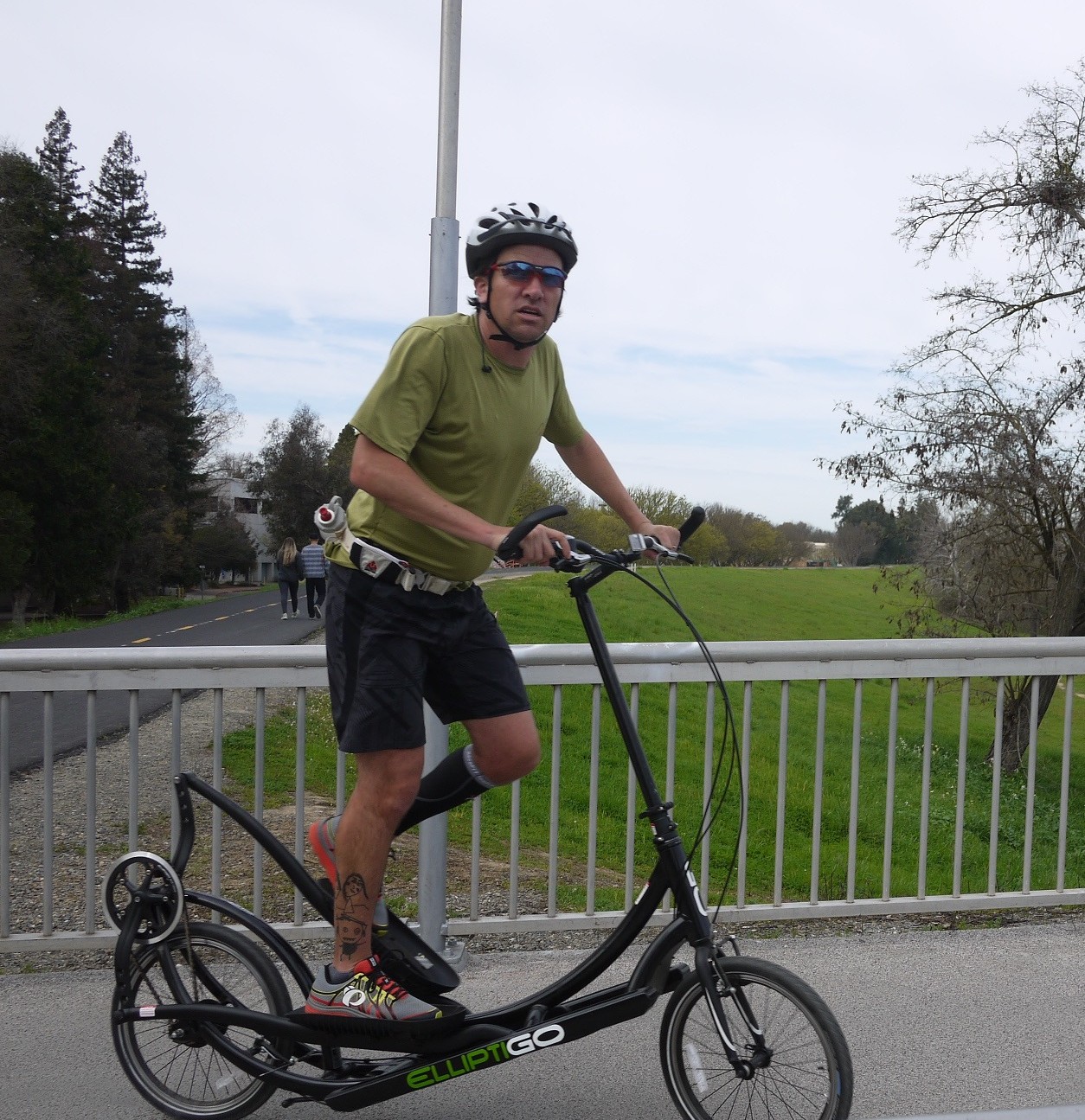 I used it four more times, once a pure hill workout heading up to Folsom Lake, and another where I incorporated some intervals into my ride.  Each time I dismounted, I felt like I’d had a quality workout and that I needed to eat everything in sight. This thing burns calories like crazy.

My model 8C has eight gears, using an internal hub gear changer, while the 11R (for racing) is a bit lighter, and has 11 gears with a similar build.  John’s 11R had toe clips that I tried and liked a lot.  The 11R seemed faster, but also comes at a thousand dollar premium.  Ouch.

Alright, so I’m in love, but let’s be realistic.  What criticisms do I have of the Elliptigo, and would I be hesitant to purchase one on my own?

Eventually, I had to give the Elliptigo 8C back, but have been perusing the Craigslist ads ever since. As a testament to their popularity, there aren’t a lot of these on the used market, but I’ll keep looking to see if I can find something under a grand. It seems that when someone buys an Elliptigo, they hold onto it…this isn’t just a passing fad.

Overall, I had a blast.  I’m thoroughly convinced that using an Elliptigo on a regular basis would drastically improve my running by increasing my speed, hill climbing, and ability to stack workouts close together.  I’d use it for shorter road races, as well as long ultramarathons in the mountains, and I’m absolutely certain I’d be a much better athlete because of its benefits.

I’d highly recommend this for either the well-heeled runner or cyclist who wants to up their game in the spring and summer with a new toy, or for the injured runner who’s willing to pay anything to be outdoors.